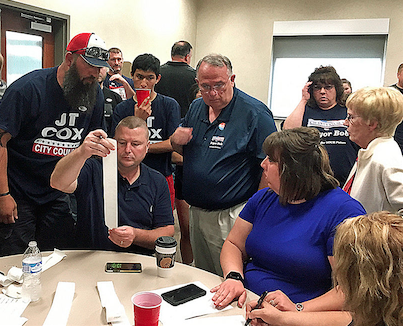 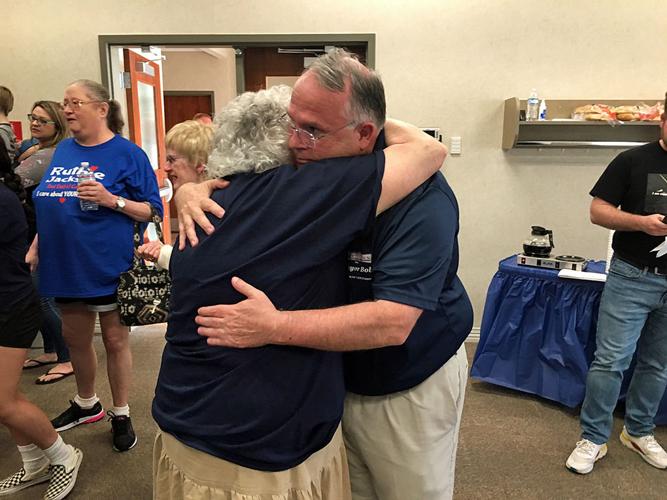 Charlestown Republican Mayor Bob Hall gets a hug from a supporter Tuesday at the Wilson Education Center in Charlestown after Hall's narrow victory against challenger David Abbott.

Charlestown Republican Mayor Bob Hall gets a hug from a supporter Tuesday at the Wilson Education Center in Charlestown after Hall's narrow victory against challenger David Abbott.

Now the attention turns to November, when Hall will square off against Democrat Treva Hodges, who ran unopposed Tuesday, in the General Election.

At stake in November is what Hall supporters say is continued smart growth for the city, versus a renewed focus on transparency, which is a main focus of first-time office-seeker Hodges.

Hall's first order of business, however, is to get back to work running Charlestown.

"We've taken a few weeks here and have been very focused on what we needed to do here," Hall said Tuesday from Charlestown GOP headquarters at the Wilson Education Center. "We've got some great projects we've got to finish up, so we'll do what we need to do, because I am mayor and I've got a job that I'm supposed to be doing, and then we'll take a look at it in September and start getting ready for the November election."

Hodges, who is finishing her doctoral studies in humanities with a focus in public history and women and gender studies from the University of Louisville, will be waiting.

"I've tried to put my information out there, my name out there, and let people know that I'm coming down the line," Hodges said. "A primary is to let people pick. And they've chosen today. They've chosen who they want to face off in November. Now it ramps up."

"Every election you've got to work like you're 1,000 points behind from day one," Hall said. "What happened in the primary, a lot of people crossed over in their parties. Those same voters will be voting in the fall. But the Republicans as a whole are general [election] voters, not primary [election] voters, so that's been one of the concerns that we've had. We did what we were supposed to do."

"We all knew they were going to do that. We kind of saw that coming," Noel said at the Wilson Education Center. "I not only got involved to help Bob because he's a long-time friend, but also because I felt there was some manipulation going on. And obviously you can see the numbers it shows that. You've got very few people voting in the Democrat primary."

"It's convenient to blame the opposing party when the flaws of a candidate become so overwhelmingly obvious," she said via text. "The Republican party had a primary for a reason ... It's hard to call foul after the voters have spoken."

Hodges viewed Hall's closer-than-anticipated battle with Abbott another way — as an open wound.

"I'm encouraged by the results because I think that it shows that he is in fact vulnerable," she said of the incumbent. "I think that a candidate who is strong and informed can really give him a run for the money. I've definitely put in a lot of time so that I am well informed."

To that end, Hodges, whose main issue with Hall is what she calls a lack of transparency, will continue to attend Charlestown-related meetings, send hand-written letters to residents and tap into social media, including an upcoming town hall streamed on Facebook Live.

"I look forward to having that Facebook Live event where people can come right on, because I believe fully in transparency, and I think that is a good way of showing people that I'm ready for their questions," Hodges said Tuesday outside of Clark County Democratic headquarters at the K of C building in downtown Jeffersonville. "I'm ready to be open and just really put myself out there, and I'm not afraid of a little bit of vulnerability, in a sense."

As for transparency, Hall said his administration is an open book.

"All of our records, all of our finances, everything is online," Hall said. "She's trying to build that as a campaign issue. I'm there, people come see me. We hold more meetings than what we have to. We do all our business up front ... We've had perfect audits. You can't get any better than perfect, right?"

With Hall appearing vulnerable, Hodges is banking on enough residents wanting a fresh face — and not someone rooted in politics.

"I think what you're seeing nationwide is this push-back from these career politicians that get in and then run things as if it's their only decision that's driving it," she said. "I think that trends are showing us that people are ready for folks that are new that have skills but not that political experience. So I'm driven by that. I think that voters are driven by that too, and I think that's what we'll see."

Hall will stick with his experience as his greatest asset heading into November.

"I am who I am," he said. "I'm a hard worker. I love Charlestown. I get up every morning thinking how we can do better as a community. So I'm looking forward to getting up tomorrow and starting that again."

ICYMI: Our complete coverage of the 2019 Primary Election