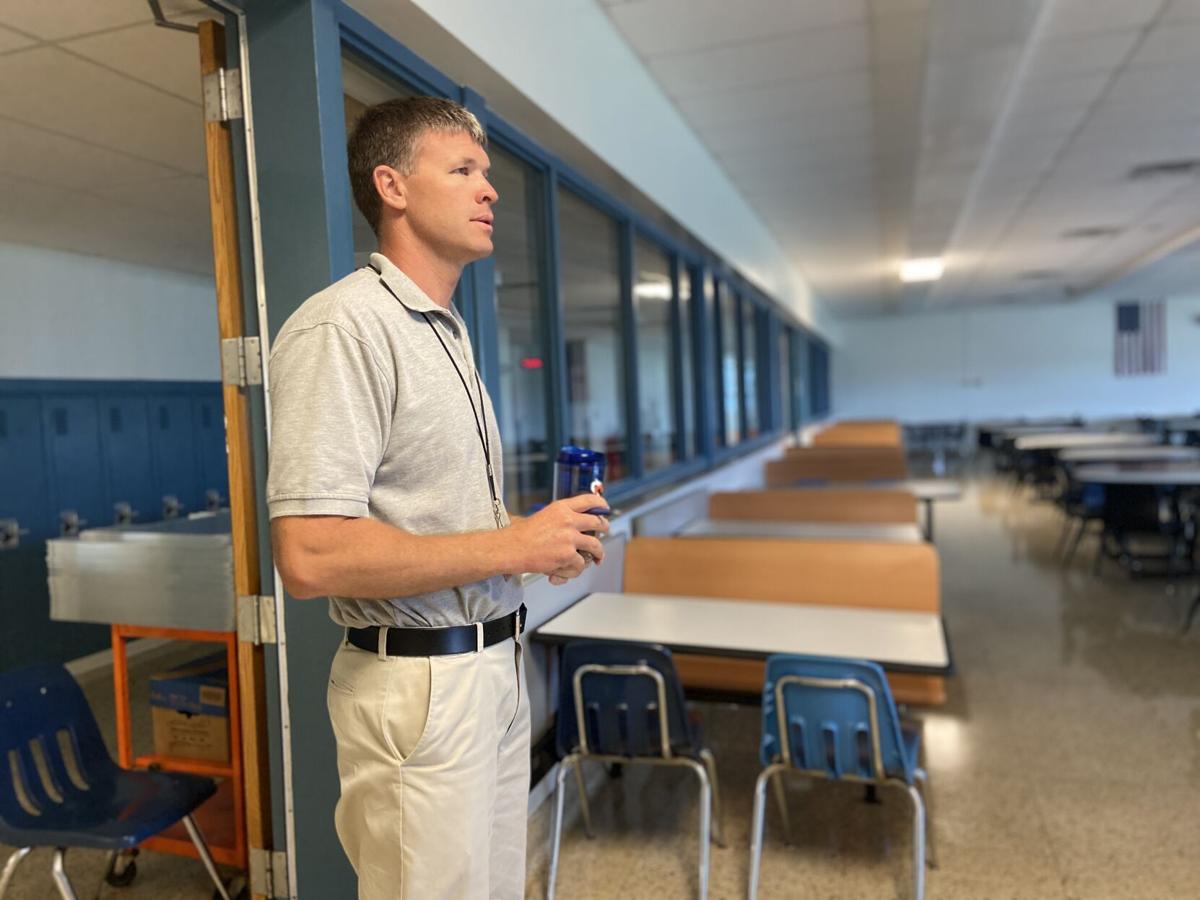 Silver Creek Assistant Superintendent Thomas Brillhart stands in the cafeteria of Silver Creek High School, which will be expanded or rebuilt through an upcoming building project. 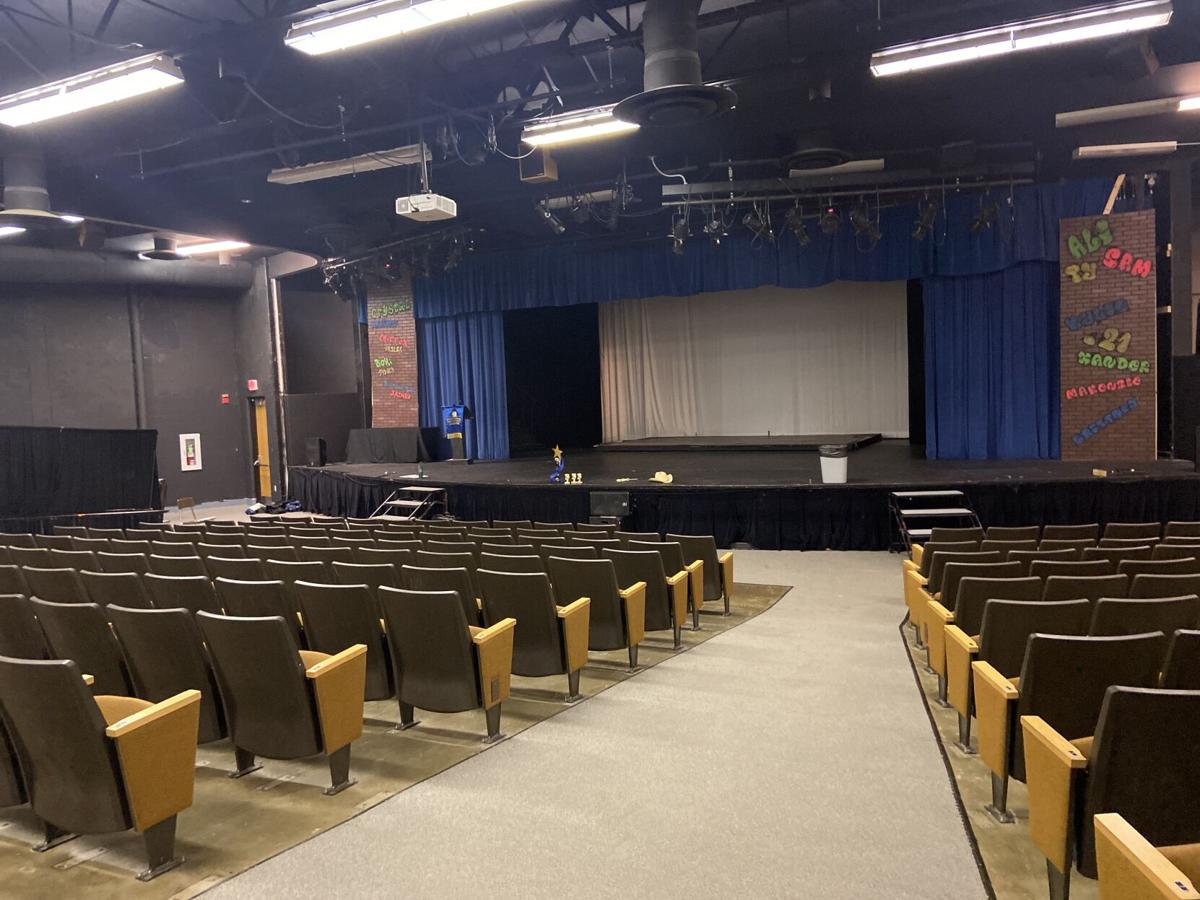 The auditorium at Silver Creek High School will be rebuilt through an upcoming renovation project across the Silver Creek district. The district will fund the project with about $55 million in bond sales. 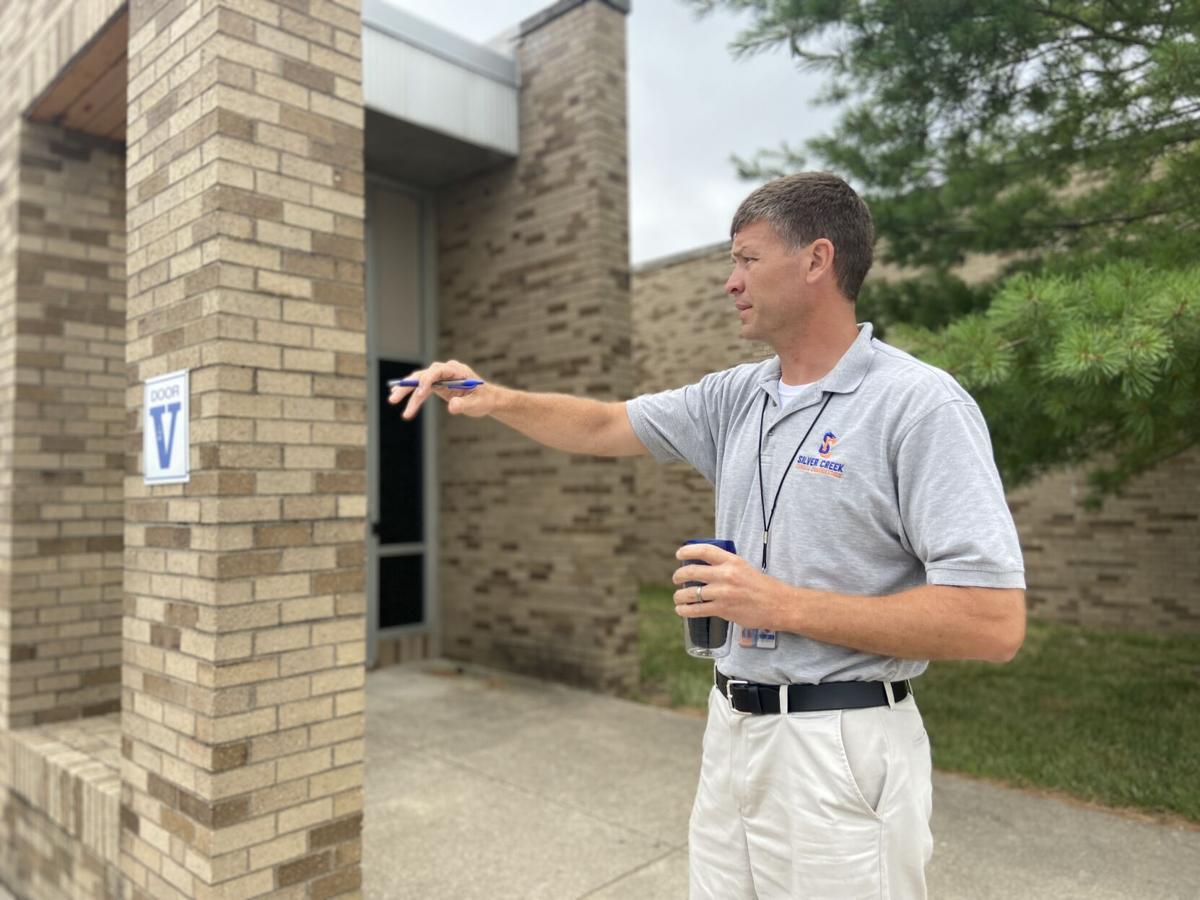 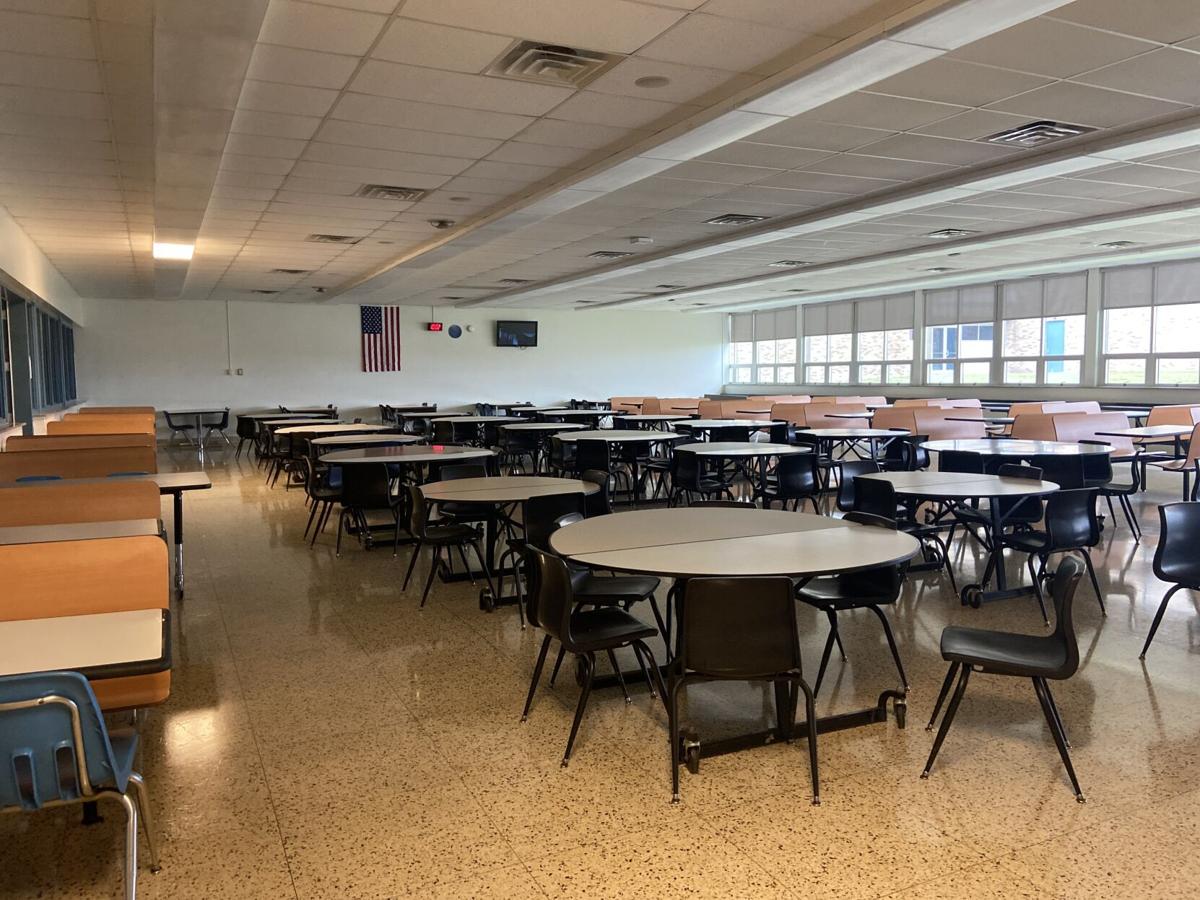 The cafeteria at Silver Creek High School is undersized for the school’s population, so it will be among the spaces expanded or rebuilt in the district’s $55 million renovation plan.

Silver Creek Assistant Superintendent Thomas Brillhart stands in the cafeteria of Silver Creek High School, which will be expanded or rebuilt through an upcoming building project.

The auditorium at Silver Creek High School will be rebuilt through an upcoming renovation project across the Silver Creek district. The district will fund the project with about $55 million in bond sales.

The cafeteria at Silver Creek High School is undersized for the school’s population, so it will be among the spaces expanded or rebuilt in the district’s $55 million renovation plan.

This is part one of a two-part series focusing on the Silver Creek and Borden-Henryville school corporations a year after they split from West Clark Community Schools.

The next story will focus on Borden-Henryville School Corp.

SELLERSBURG — A year after splitting from West Clark Community Schools, the new Silver Creek School Corp. is looking to the future as school leaders prepare for extensive facility renovations across the district.

The former West Clark split into the separate Silver Creek and Borden-Henryville corporations last July after a referendum, and it’s been a busy year for the new district as they have balanced both the transition and the COVID-19 pandemic.

Silver Creek is now preparing to move forward with major district-wide building renovations through a $55 million bond sale. As of right now, it will likely be the largest bond sale of any Indiana school district for this calendar year, said Silver Creek Assistant Superintendent Thomas Brillhart.

The building projects are projected to begin in early 2022 after years of discussion about the need for facility upgrades at schools in the Silver Creek community. In 2017, voters rejected an $82 million referendum that would have mainly gone toward building and program improvements at the Silver Creek campus, which prompted the push for the West Clark separation.

“[The upcoming project] will have a significant impact on our corporation,” Brillhart said. “I think people will be excited, and obviously our kids will reap the benefit of it. It will create some interest in the corporation, we hope, and it will be able to go hand in hand with the expansion of certain programming and educational needs.”

Silver Creek Board President Chris Rountree said his No. 1 priority is creating a “safe, first-class learning environment for all students and staff.”

“For us to grow and provide the first-class learning opportunities and facilities for students, we have to make more room, have to have more tools to be able to implement those programs,” he said. “That’s going to come with the building project.”

The West Clark split has facilitated plans to move forward with Silver Creek projects school leaders say are long overdue. As separate districts, each community can dictate its capabilities to bond for construction projects and how much to borrow for facility needs and upgrades, Brillhart said.

“Definitely one of the encouraging factors for support of the reorganization was both entities to dictate their future,” he said. “One of the largest components of that is what do you want to do with your facilities.”

The planned construction projects will transform Silver Creek schools through major upgrades and additions. The most dramatic renovations will take place at the high school, an older facility built in the early 1960s that is undersized for the current student population.

The high school has about 900 students now, but it was only built for about 550, Rountree said.

Over the course of the years, the high school has probably seen the least amount of interior renovations per square foot of facilities in the district, Brillhart said.

“It needs some love, let’s just put it that way,” he said.

The site plan for the Silver Creek campus is also a major part of the planned facility upgrades, he said.

“We have this footprint, these 41 acres, and if we’re going to quote on quote tear it down and rebuild it, per se, or have to shift items left or right, how are we going to do that not only for current needs but also for future needs,” Brillhart said.

Proposed improvements will include:

Brillhart said Silver Creek will likely see a 1% to 2% increase in enrollment over the next five years, he said, and the district is seeing a large amount of out-of-district transfers.

“Our kindergarten class — as of three weeks ago — is already on pace to be our largest class in the corporation,” he said.

The projected $55 million bond for the building projects will likely go to bid the first or second week of August and close the third week of August. The school board is in the process of interviewing candidates for construction management, and the board will announce the selection at the July 19 school board meeting. The district will then proceed to hire general contractors.

“We’ll have money available [from the bond issuance] probably by the end of August,” Brillhart said. “We won’t really start paying invoices primarily until about September, October.”

Construction will probably begin in early 2021, and the project is expected to take at least two years.

With the new bond issuance, the tax rate is projected to go from 78 cents to 88 cents next year. The tax rate will be in line with the 89-cent tax rate in 2020 when the district was still part of West Clark, he said.

Brillhart notes that the plans are not finalized, and the “almighty dollar will rule everything that we do.”

“At the end of the day, we don’t want to design something and plan something we can’t afford,” he said.

Rountree said the transition from West Clark itself was a “job and undertaking,” but the additional challenge of operating during a pandemic “made for a really, really tough year.”

“But we persevered through it,” he said. “We were resilient, our staff members were resilient, and their efforts to be able to keep going meant education didn’t suffer because of it.”

Brillhart said the past year has been “challenging and tiring” as Silver Creek worked through the reorganization, including splitting assets between the two new corporations or working through debt obligations from West Clark.

“There’s been a lot of blood, sweat and tears involved in it, a lot of financial obligations that have been put forth and toward it, but the short-term inconveniences, I think, are going to be worth it for the long-term gains for both corporations,” he said.

Silver Creek has also seen turnover in leadership over the past year. Former West Clark Superintendent Clemen Perez-Lloyd was the superintendent for the new Silver Creek district until she stepped down in late 2020, at which point Brillhart took leadership in the interim.

Filling the superintendent position was a major undertaking, Rountree said, and he believes Briggs brings a “broad knowledge of the position.”

The split allows Silver Creek to go its own way with curriculum development, and the board will be developing a long-term strategic plan for its “wants, needs and ambitions” for curriculum, “whether it’s putting more resources toward business, more resources toward science, Project Lead the Way or dual credit offerings,” Brillhart said.

Scott Groan, vice president of the Silver Creek board, said the district is focused on the “new.”

“The corporation has a vision of what we believe can be the best school corporation in Southern Indiana and possible the state of Indiana,” he said.

His main focus is education and making sure the district has a system in place to offer “more opportunities within the educational foundation.”

Groan said another priority is the special education program now that Silver Creek no longer shares services with the Borden-Henryville schools.

“This summer, we’re creating new classrooms so we’re ready for all special-needs students, so they have a home and feel comfortable here, and we’ll also prepare for future growth of the department,” he said.

Joe Basham, a Silver Creek board member who also served on the West Clark board for more than 12 years, said “it’s a little refreshing to just worry about one community” as a separate school district. He is excited about the opportunities to expand programming and curriculum with the planned renovations and building additions.

“The building project is allowing us to look outside the box at what we’ll be able to offer once we’re done,” he said.

The district is now fully separated from Borden-Henryville in terms of operations, Rountree said. In the past school year, the two districts maintained joint agreements for food service, IT services and special education, but those joint service agreements expired July 1.

Rountree feels “great” about Silver Creek’s financial situation, saying “we really are at a great spot.” He noted the board was able to give 3% raises to all employees this year between salary increases and stipends.

Brillhart feels the “foundation” has been built for the new district and they are “ready for the next brick.”

“I’m proud of our staff, I’m proud of our kids, I’m proud of our families, and I’m proud to be part of this district,” he said. “Silver Creek is in a very, very good situation. We are poised to be a sound instructional delivery model for kids and our community, and really the only thing that’s standing in our way is ourselves.”