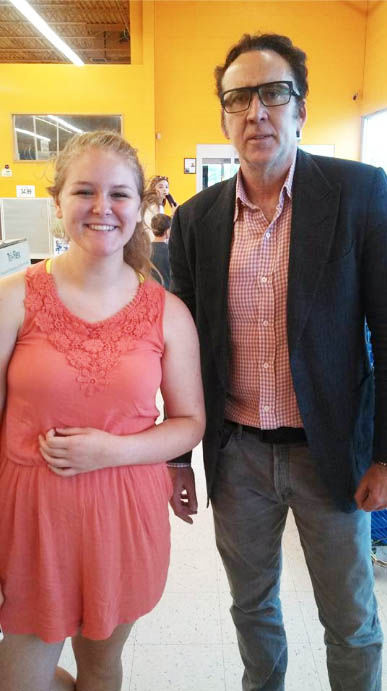 Celebrity Nicolas Cage was seen shopping at Toys "R" Us in Clarksville. 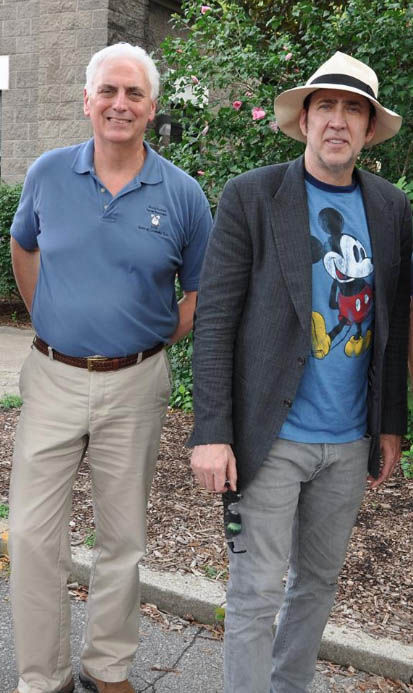 Celebrity Nicolas Cage was seen at the Louisville Zoo on Monday.

Celebrity Nicolas Cage was seen shopping at Toys "R" Us in Clarksville.

Celebrity Nicolas Cage was seen at the Louisville Zoo on Monday.

SOUTHERN INDIANA — Based on the number of Nicolas Cage photos in Southern Indiana and Louisville that have popped up on social media this week, it seems like the actor has been making the most of his days off-set.

Cage is in town for the filming of “Mom and Dad,” a horror film where parents inexplicably turn against their children for a 24-hour period, according to the film's IMDB page. It's being filmed at St. X High School in Louisville.

In his downtime, Cage has been spotted in multiple locations on both sides of the river over the past few days — Target and Toys "R" Us in Clarksville, The Louisville Zoo, even an optometrist in Southern Indiana.

Adam Gray, executive team leader of asset protection at Target on Veterans Parkway in Clarksville, said he wasn't at work when Cage stopped in for a short shopping trip Friday night. But since part of his job means reviewing security footage, he did get to see the video later.

“I saw him come with, it looked like a younger kid and a female, and they were in here for like 10 minutes at the most,” Gray said. “He definitely didn't shy away from anyone. He seemed nice, taking pictures with everybody, signing autographs.

“I was a little upset I wasn't here; I'm a huge fan,” Gray lamented.

He said it was nice to see Cage being so friendly to the public. Gray said he'd just returned from a trip to Hollywood, where he ran into a few celebrities who weren't so open.

“It was definitely cool,” he said of Cage's interaction with fans. “There's definitely a little buzz going on right now.”

Anthony W. Stepp Jr. was shopping at Toys "R" Us in Clarksville with his wife, Kimberly, and daughter Cheyenne, 14, when he thought he spotted Cage.

“I saw him, but it didn't register,” he said. “So I'm walking and I hear his voice and I kind of pause for a moment because I know that voice.”

He said he hurried to his wife and daughter, but they were skeptical. Why would Nicolas Cage be in a toy store in Clarksville?

He said he saw the film star again at the checkout registers, this time with a girl taking a selfie. Stepp said he tried to coax his daughter into going to talk to him.

“I said, 'Cheyenne, he's just like we are, puts his pants on one leg at a time, he's just really famous,'” Stepp said.

As Cage was leaving the store, Stepp said he knew he couldn't let this moment pass.

He said Cage was gracious enough to pose for a photo with Cheyenne, and talk with the Georgetown family for a few minutes before heading on his way. Stepp said he waited until Sunday to post the photo, to respect Cage's privacy.

He said his biggest takeaway from meeting Cage is that “you never know who you're going to see,” adding that if he had the chance, he would have loved to talk for a few more minutes.

Running into people normally only seen on the screen may become more common to the area, as filmmakers from across the United States take advantage of tax incentives designed to draw them to the Bluegrass state.

For a film to be eligible, the company must submit an online application and script, and both must be approved by the Kentucky Tourism Development Finance Authority, according to Jay Hall, deputy commissioner of the Kentucky Department of Travel and Tourism.

“It has a board of nine members that review all applications and scripts and then vote on whether or not to approve the incentives for those,” Hall said, adding that obscenity, for instance, would not be allowed, according to state statute.

Before the 2015 incentives were set last year, the state had a smaller draw from companies interested in a former incentive — in 2009 the state set forth a 20 percent, non-refundable tax credit to filmmakers.

The new one, Hall said, is much more of a lure. Over the six-year period between 2009 and June 2015, the board received 24 applications for the filming incentives.

“Now since we have instituted the new incentives, we have had 61 applications since July 1,” he said.

Of these, all have passed the application process, which he said has made way for a boon to the local economy. There are three companies with films in progress throughout the state and one more beginning production soon — Mom & Dad Productions LLC; Monumental Productions LLC; World of Color LLC; and Tragedy Girls Pictures LLC.

The potential income to the state if all 61 films complete production would be $121 million, Hall said, which is beneficial in many ways.

“It's an incredible opportunity to bring a new industry to the state of Kentucky, and in doing so, to help change the image of Kentucky and promote Kentucky's business and tourism industries,” he said.

The companies are drawn to film locales across the state, but for those working in Louisville, it's not too far for Hoosiers to catch a glimpse of a man they've only viewed from afar — shopping for toys, maybe getting his glasses adjusted, and donning a Mickey Mouse T-shirt, watching the elephants take a bath.