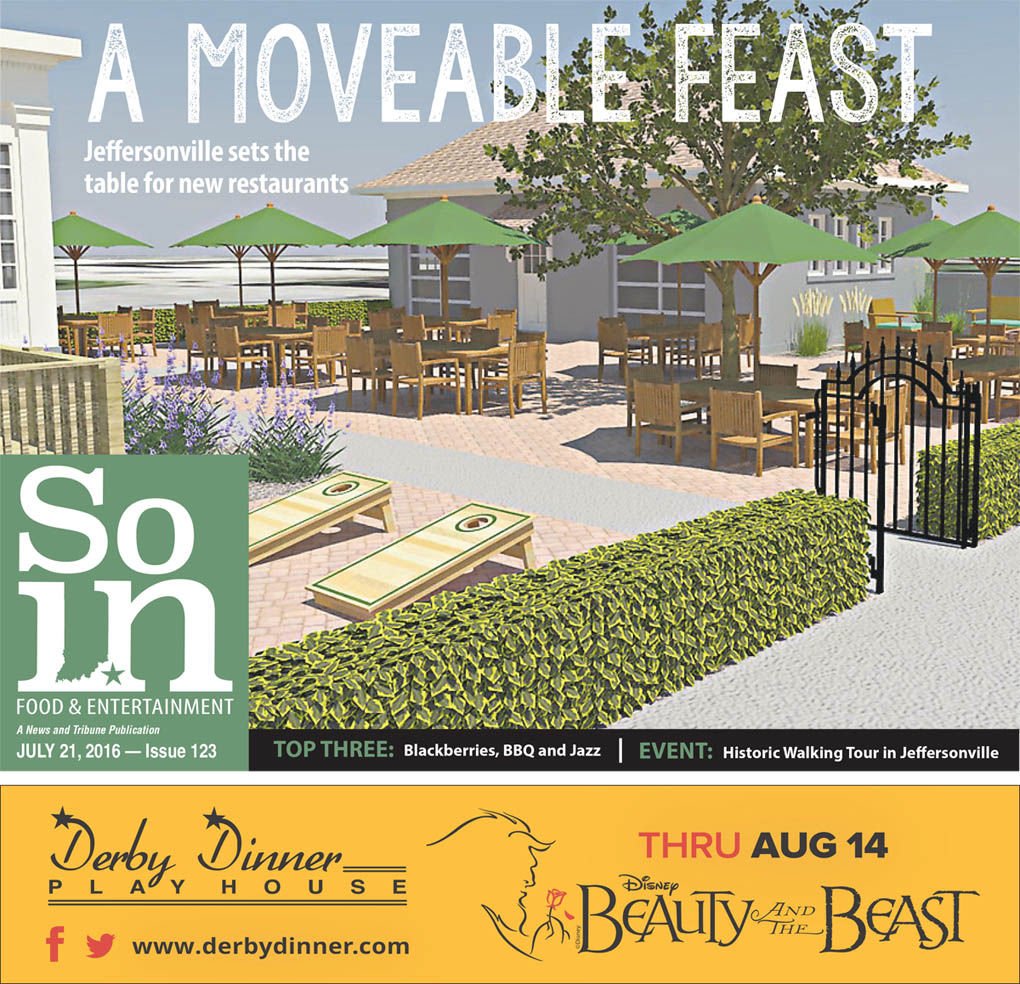 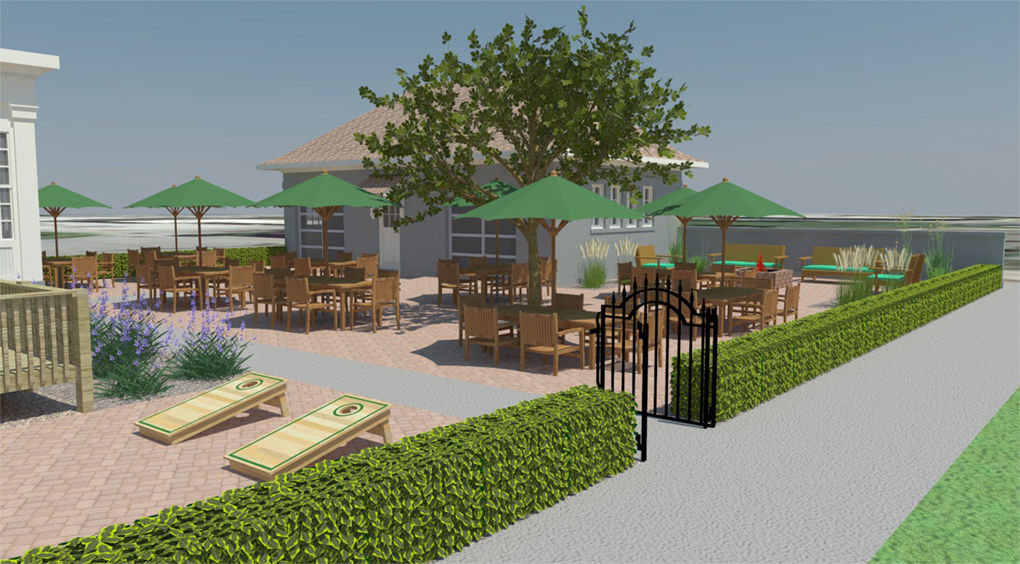 Parlour, a new pizza restaurant in Jeffersonville, will feature a beer garden and social space for outdoor games. 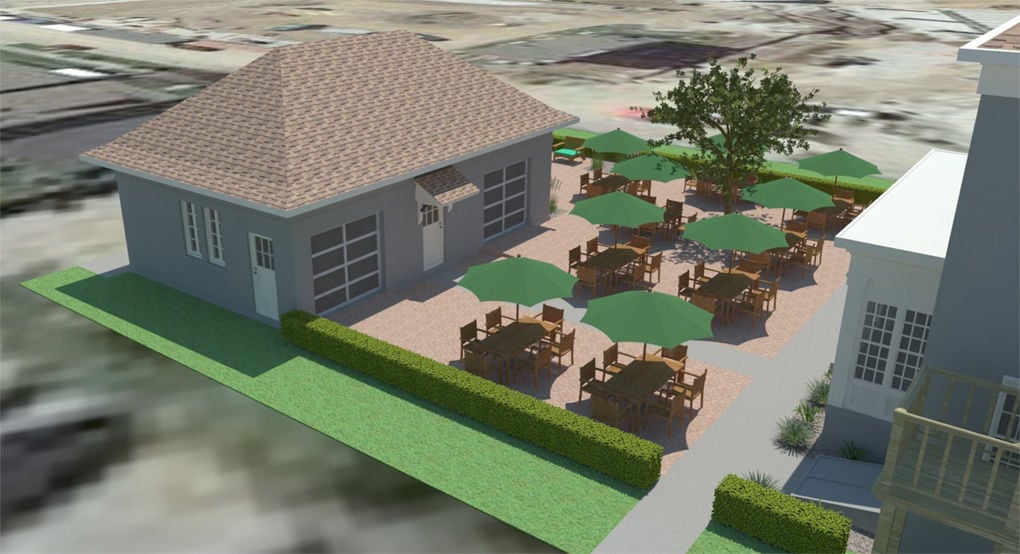 Guests at Parlour can sit inside or outside the historic home located right at the entrance to the Big Four Bridge in downtown Jeffersonville. 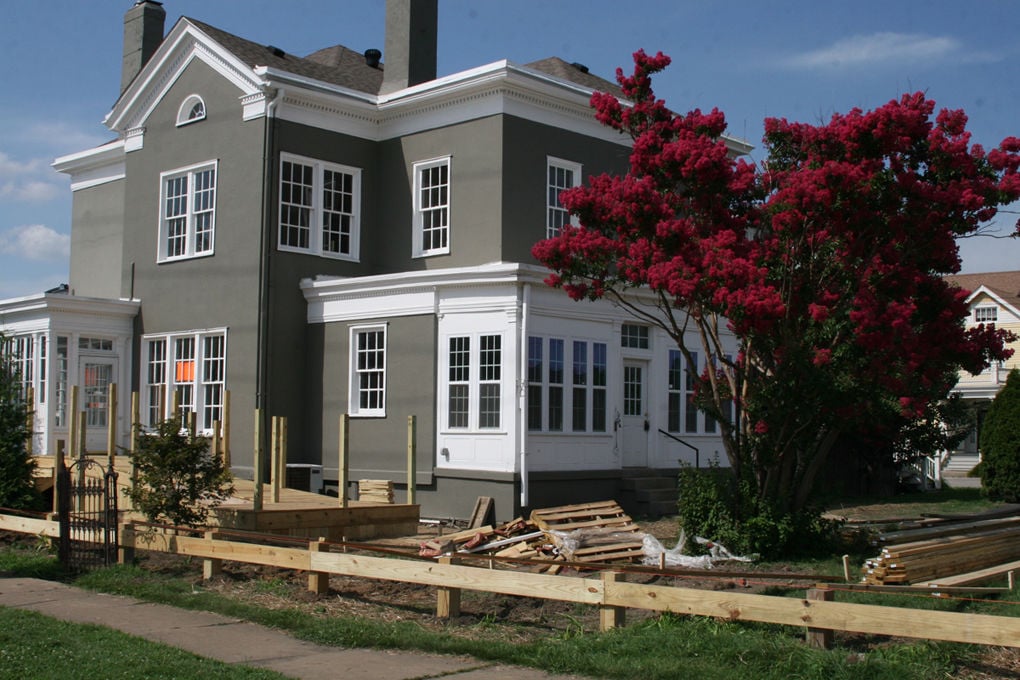 Construction is underway at the former Old Bridge Inn, now Parlour, a pizza place with a beer garden on Chestnut Street in Jeffersonville. 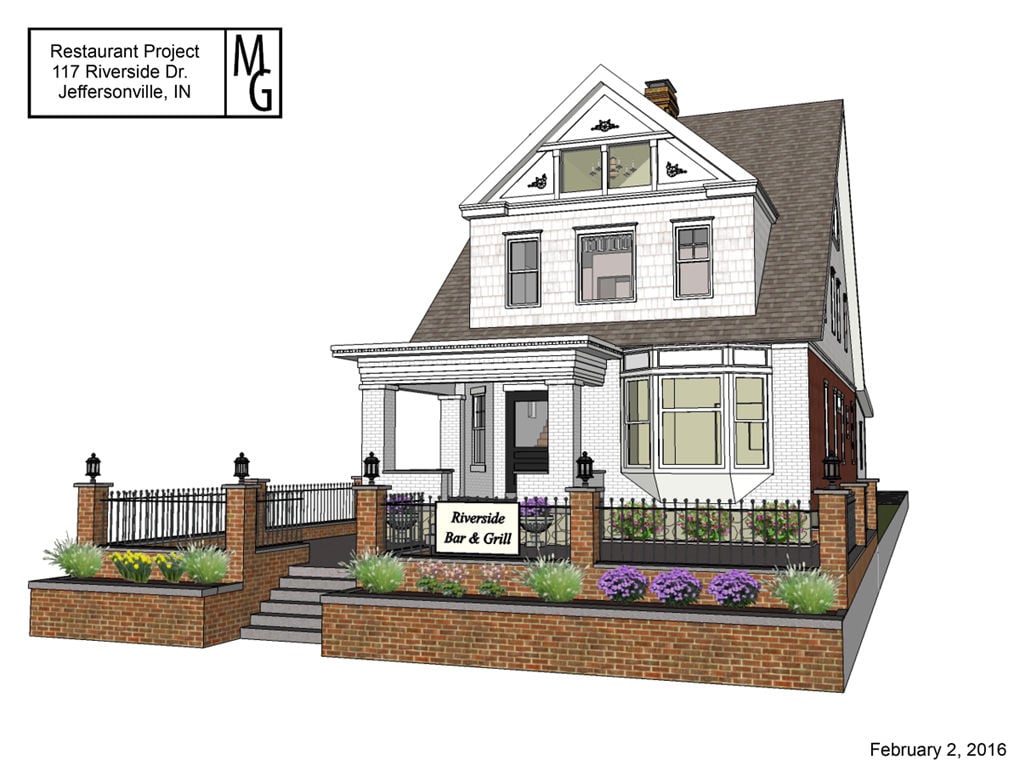 Portage House will feature Southern food with a local twist as well as seafood. The restaurant is located on Riverside Drive in Jeffersonville. 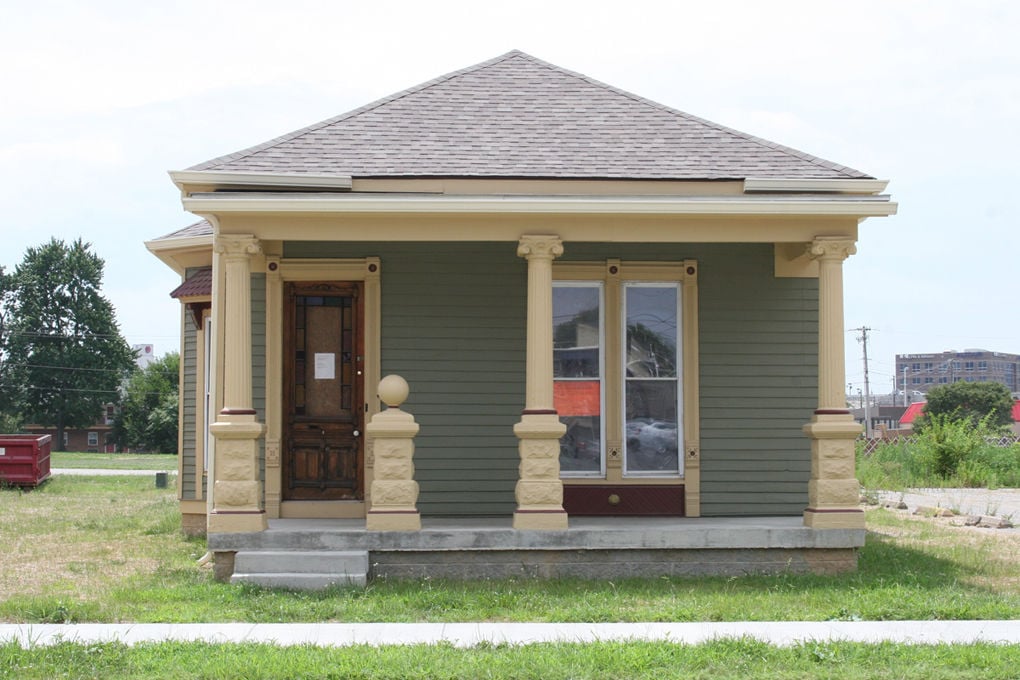 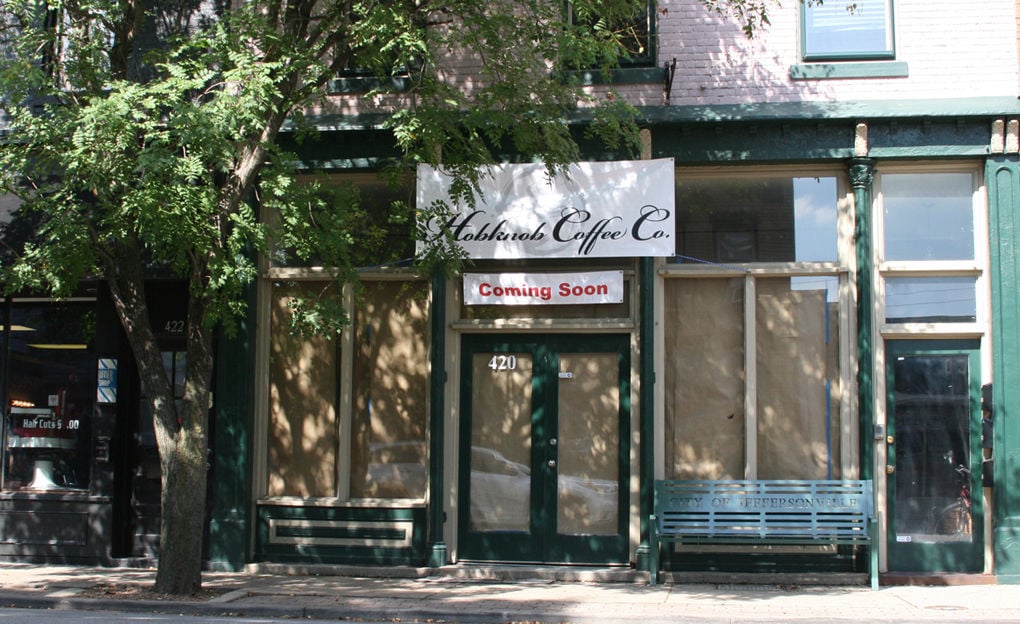 Parlour, a new pizza restaurant in Jeffersonville, will feature a beer garden and social space for outdoor games.

Guests at Parlour can sit inside or outside the historic home located right at the entrance to the Big Four Bridge in downtown Jeffersonville.

Construction is underway at the former Old Bridge Inn, now Parlour, a pizza place with a beer garden on Chestnut Street in Jeffersonville.

Portage House will feature Southern food with a local twist as well as seafood. The restaurant is located on Riverside Drive in Jeffersonville.

JEFFERSONVILLE — In the two short years since the Big Four Bridge has unleashed hundreds of thousands of empty bellies and stuffed wallets into downtown Jeffersonville, the historic district has transformed into a humming food and beverage hub.

Open spots in the few blocks that make up downtown Jeffersonville are now highly competitive. One Louisville-based real estate company threw down a chunk of change on a house right in front of the Big Four Bridge before developers even knew what to do with it.

Well, surprise — that house will now host a restaurant and beer garden.

It's one of several new eateries opening in downtown Jeffersonville in the coming months.

"We're seeing a real renaissance in downtown," said Jay Ellis, executive director of Jeffersonville Main Street Inc. " ... We've been working toward this for 25 years. We've been trying to see this area of town come full circle and come back to life."

Here's what you can expect.

"He has all these great pizza recipes, and no one in Jeffersonville is doing any good quality pizza," owner Alex Tinker said.

Parlour will cure its own meats in-house and grow its vegetables in a chef's garden on-site, fresh ingredients for the restaurant's "pretty simple pies" Tinker said. They'll range from $15 to $25 per pie.

The historic building, formerly hosting a bed and breakfast and an art gallery shop, is perfect for a beer garden and outdoor patio.

"I have had the concept to do a real beer garden for a long time but have just never had the right space," Tinker said.

The carriage house on the side will host a bar with 40 taps, where outdoor patios diners can re-up their libations. The said adjoining patio will feature an outdoor fireplace and horseshoes or cornhole, transforming the space into a social scene.

Inside the main building, pizza will be served on the first floor while another bar upstairs with a lounge and TVs will welcome guests who may want to stay a little longer or warm up during the winter.

"I personally live in Indiana and wanted something in the area that would not be just another Louisville copycat restaurant coming across the water. I wanted an Indiana proud restaurant to be there."

That's the concept behind Portage House, masterminded by Chef Paul Skulas formerly of Louisville's Gralehaus. The group behind the Portage House also opened Commonwealth Tap and Fontleroys, in Louisville.

The restaurant is Indiana farms meets the sea — Skulas listed the local origins of the turf and added Portage House will serve up some turf, too. The price point will cap at $25 or $30.

"So we're going to try to represent the state and the area as best we can, and also add a whole bunch of oysters in there, too," he said.

The historic home on Riverside is under restoration right now. When it's finished, the first floor will be "bar heavy" with wine on tap and full cocktail service. The second floor will contain dining overlooking the Ohio River.

But Zingzang owners — same as Jeffersonville's suddenly famous The Hub Roti Cafe — will be frying up hushpuppies and po'boys from Match's kitchen, serving from the bar inside or out back to diners on a patio.

At Zingzang, you'll find grub you can't get anywhere else in Southern Indiana, like alligator tail or seasonally rotating bread pudding.

Prices will be a bit higher than they are at The Hub, hovering around $10 or $12.

"We just decided it would be good for everybody," Ben Jones, co-owner, said.

You know those four historic homes that were moved to Pearl Street a couple years ago? Well, they won't be empty much longer.

Locals Kelly Conn and Teri Taylor are combining their dream of owning a business and their love of craft brews. Pearl Street TapHouse will locate in an historic home that was saved through a preservation grant and Jeffersonville Main Street.

The pub will have 24 taps with a heavy focus on local breweries, then regional and then national, in that order.

"We want to be the location for the people who are real beer connoisseurs that are looking for those taste palates that can't be fulfilled anywhere else," Conn said.

Pearl Street TapHouse will also serve food from a one-page menu — bites like oysters on the half-shell, wings and sliders. No ingredients will be frozen and no foods will be deep-fried. The taphouse won't even have a deep fryer.

The establishment will be open until 10 or 11 p.m. on weekdays and midnight on weekends.

"We're just very excited to be part of what I feel is the revitalization of downtown Jeffersonville," COnn said.

Lovers of this Floyds Knobs coffee shop will be happy to learn Hobknob is expanding to downtown Jeffersonville.

"With all the growth and activity in downtown Jeffersonville, it just seemed like a natural place for us to go," owner Aaron Lundy said.

Lundy hopes the Jeffersonville location can serve a different purpose than the morning rush, grab-and-go nature of the Floyds Knobs cafe.

"We wanted to make the downtown store a little more friendly for people that wanted to sit down and come enjoy a cup of coffee and relax," he said.

The cafe will have a bar where caffeine enthusiasts can talk to the brewers making their coffee. Guests can also sit in clusters, socializing or working, with a french press right at the table.

All ingredients will be roasted in the shop.

"We're really excited to get down there," Lundy said.

6. Cafe at Big Four Station [Name yet to be determined]

A use for the 1830s historic home at the foot of the Big Four Bridge, surrounded by park property, has been in limbo for years.

The city of Jeffersonville hoped to convert the old two-story building into a police substation, but the property owner sold it instead to the owners of the Market Street Inn Bed and Breakfast.

"It's going to be on the healthier side of things," owner Carol Stenbro said, though she and others haven't settled on menu items just yet.

"Our main objective right now is getting the historic renovation done," she said.

The house was flooded on the inside, so she's working on restoring the floors, staircase and windows. They also want to install restrooms and heating and cooling.

Though there's plenty of work ahead, the house holds features Stenbro said she hopes to restore and put to use — a fireplace being one of them.

"We're trying to keep those architectural elements and still make it functional, but it'll still have that historic feel to it," she said.

Click the above image to read the latest issue of SoIn.

JEFFERSONVILLE — Along with hotels, restaurants and senior housing, a more than 70-acre commercial campus is bringing a business Jeffersonvill…