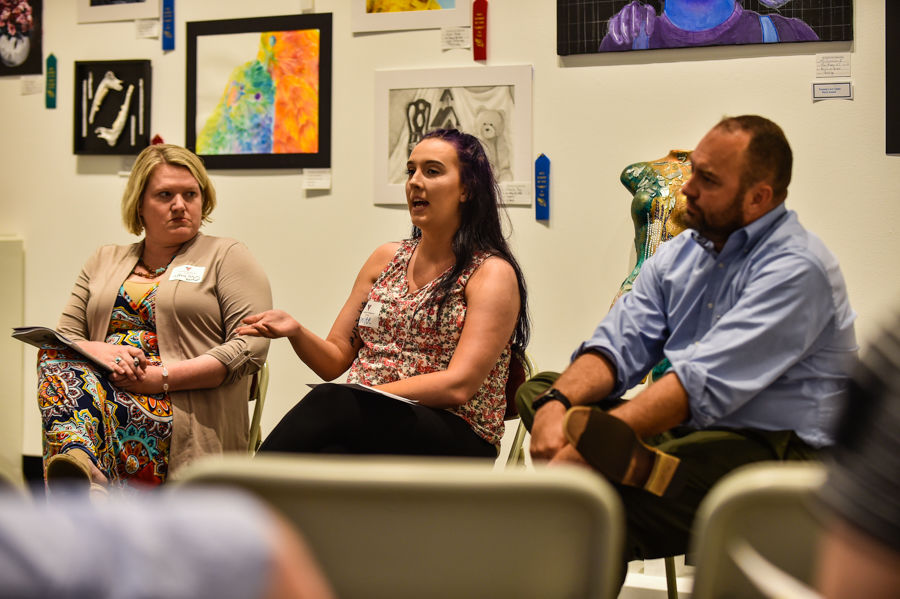 Emilee Ward, Louisville, discusses her experience of trying to find help in overcoming her addiction during Wednesday's community conversation at the Carnegie Center in New Albany. Ward is a graduate of the Freedom House program, a residential treatment facility in Louisville for addicted pregnant women and women with young children, an area of care that Clark County Health Officer Dr. Eric Yazel says is missing. 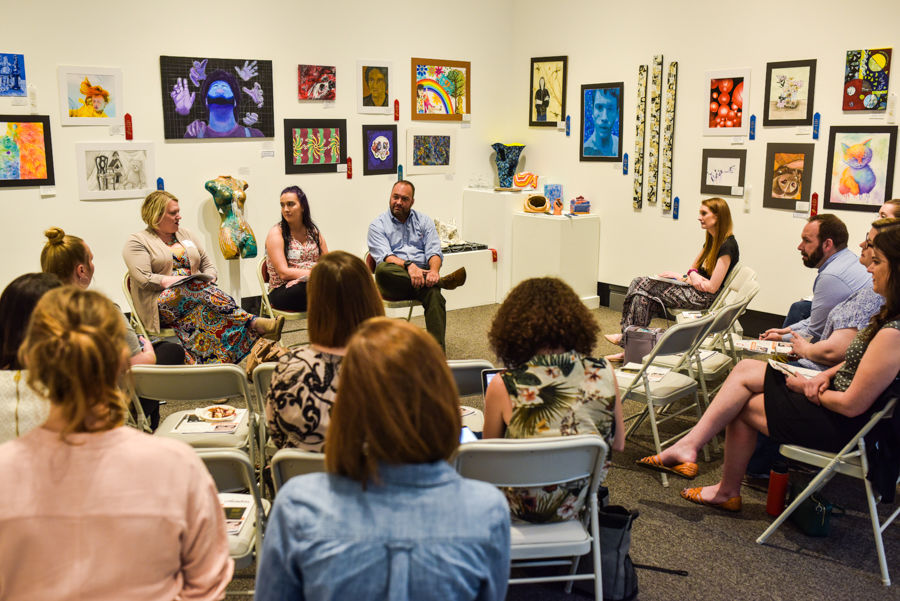 Emilee Ward, Louisville, discusses her experience of trying to find help in overcoming her addiction during Wednesday's community conversation at the Carnegie Center in New Albany. Ward is a graduate of the Freedom House program, a residential treatment facility in Louisville for addicted pregnant women and women with young children, an area of care that Clark County Health Officer Dr. Eric Yazel says is missing.

And she knows just how important it is for women and families to have the proper resources to address those challenges.

Just a few years ago, she struggled to find a way to recover from heroin addiction during her first pregnancy before she went to Freedom House, a women's recovery program in Louisville.

Ward spoke Wednesday at a community conversation at the Carnegie Center for Art and History, presented by the Volunteers of America Mid-States. The conversation focused on how addiction affects communities, including the challenges faced by pregnant women and families.

VOA runs Freedom House, a residential treatment facility in Louisville for addicted pregnant women and women with young children. The program is not currently located in Clark or Floyd counties.

Tiffany Cole Hall, chief operating officer for Volunteers of America Mid-States, said Freedom House's family-centered model addresses cycles of addiction and issues of intergenerational trauma by serving both women and their children. The program includes a six-month in-patient period for mothers and a three-year after-care period to help with potential relapse problems.

The Freedom House program currently serves 43 women and families on its two campuses, and in May, it is expected to see its 200th healthy baby born, according to Hall. She said VOA aims to keep families together to help mothers with long-term success and prevent the trauma of broken families.

Ward, who is now a detox monitor at The Healing Place in Louisville, first came to Freedom House in February of 2017, and she was able to go to both group therapy and individual therapy during the six-month program.

Her son, Noah, could visit her there after Child Protective Services temporarily placed him in the custody of her parents — it was the only place where he could stay the night with her besides her parents' home, she said.

For Ward, the stigma of addiction has been a major challenge. For a long time, she did not want to admit that she had a heroin addiction that she could not control, she said, and she thought she could fight it on her own.

When she became pregnant, it was difficult to find the support she needed. She went to The Healing Place in Louisville, but she could not stay on its women's campus because of the risk of miscarriage while detoxing, she said.

Although she learned about Freedom House's services, she did not immediately enter the program, and she started using again.

"I think that's where most people struggle, especially being pregnant," she said. "What did I look like to other people to walk into a facility and say, 'hey, I'm pregnant and I still can't quit using drugs. I love this child so much, and it still isn't enough for me to stop.' I just couldn't stop."

When she was 38-weeks pregnant, she was living in an apartment without electricity in the middle of winter when she started the recovery process again.

"I was like, man, I need help, because I can't maintain myself, so how am I going to maintain the child?" she said. "This child is coming whether I'm ready or not, and I definitely wasn't ready. I was able to get into detox, and from that detox, they set me up with a bed Freedom House."

Because of the stigma, it is often difficult for Ward to tell people the story of how she started using again while pregnant, even if they have suffered from substance abuse themselves.

"You're so guilty and so shameful and you don't want to feel that way anymore, so you numb yourself by getting high, and when you come down, you're like, 'oh my gosh, what am I doing?'" she said. "It's just so embarrassing. I was just so mortified when I had to walk into detox with a big belly."

Many other women are in the same situation of wanting to stop using substances while pregnant, she said, but others who have not experienced it themselves typically don't understand the challenges faced by pregnant women struggling with addiction. She wants to see more people providing help instead of just rushing to judgement.

At Freedom House, she found the resources she needed to recover, and she eventually started helping other women with the detox process. Her son Noah is now 2 years old, and she has a 7-month-old son named Ezra.

Clark County Health Officer Dr. Eric Yazel said when recovery facilities are reluctant to take women during pregnancy because of the high risk, what they are doing instead is offering nothing, and there often isn't a plan B or C for the patients.

"That makes absolutely zero sense, because they're saying you're pregnant and you need help, you're too sick to be in my facility, so I don't know what to tell you," he said. "There's so many barriers."

Right now, he isn't seeing enough options available for pregnant women suffering from addiction in Southern Indiana, he said, which means they are going to Louisville or going without treatment altogether. In Clark County, Clark Memorial Health offers an opioid treatment plan for pregnant women, but in-patient options are scarce.

"We're stuck between a rock and a hard place finding patients the right place to go," Yazel said.

Yazel said there is a need for comprehensive addiction treatment like Freedom House, which he described as a "warm, friendly, stable environment." He wants to make sure that Clark County has enough patient-oriented facilities that are not simply focused on medicated-assisted treatment, but also offer services such as behavioral health, food and shelter.

There's a "laundry list" of factors that need to be addressed when treating addiction, he said, including caring for both mother and child.