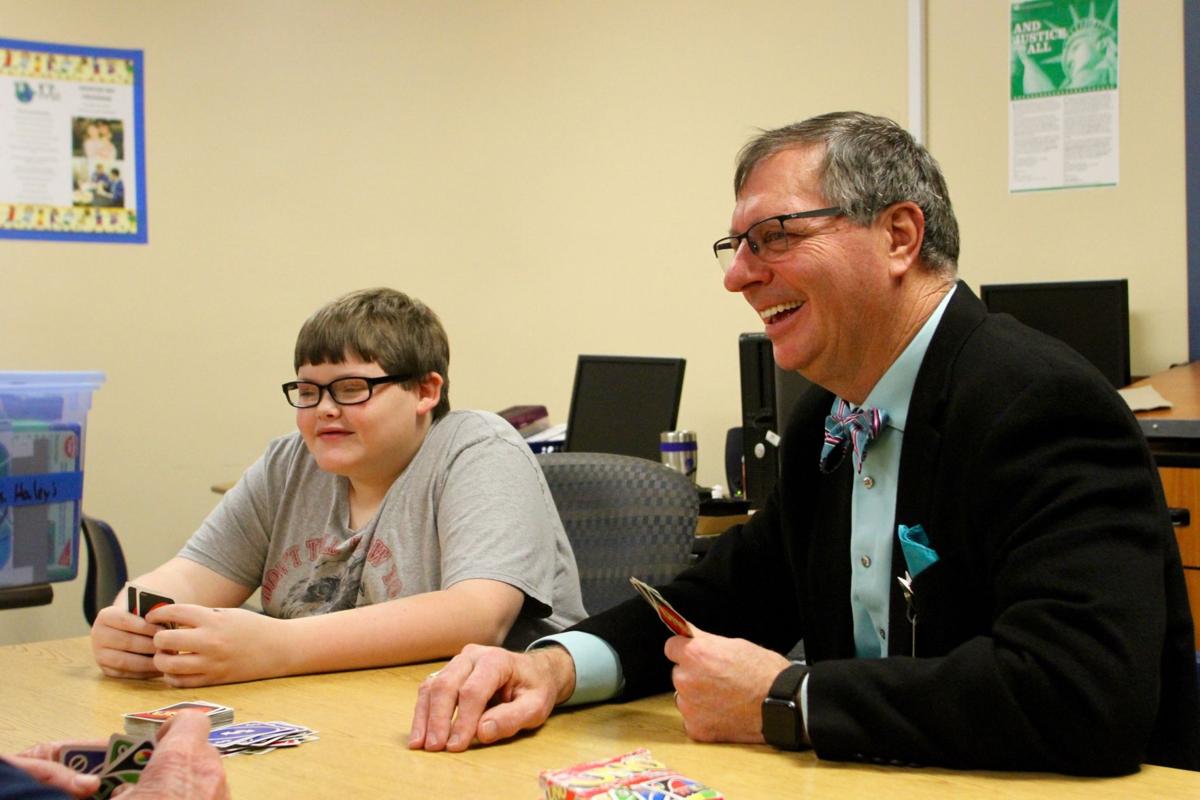 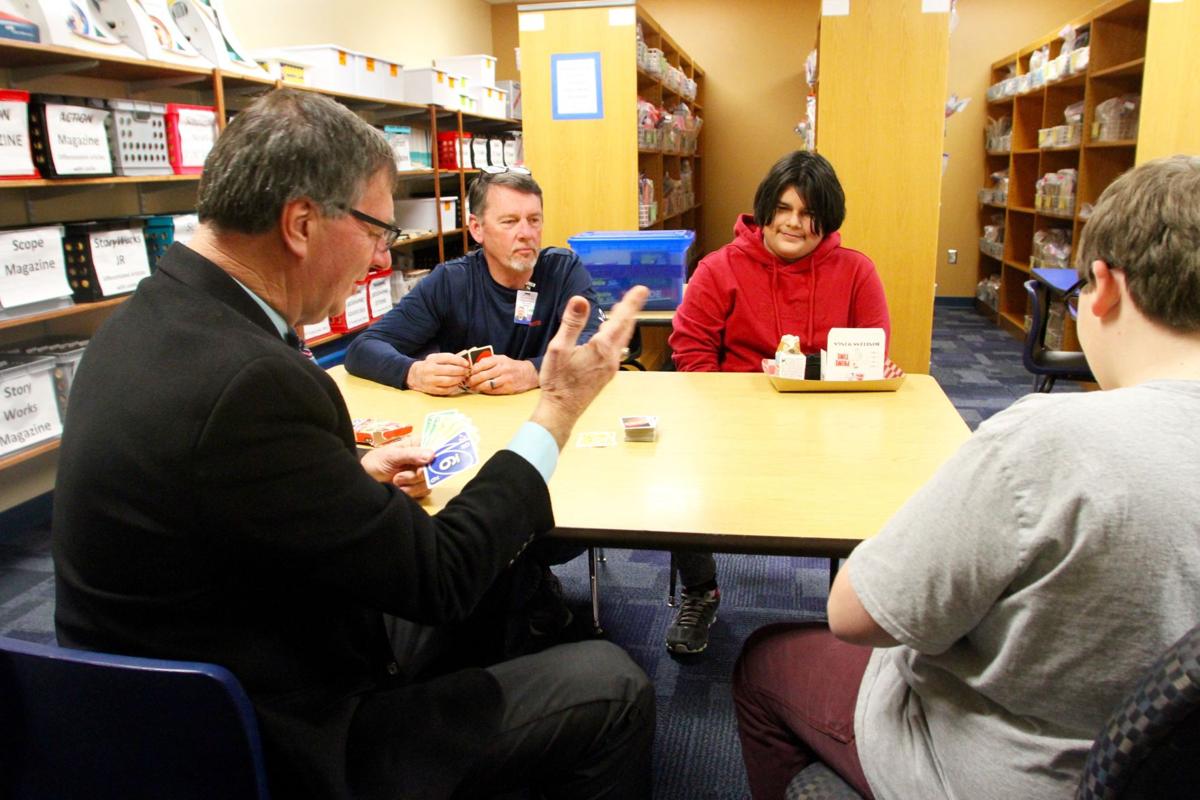 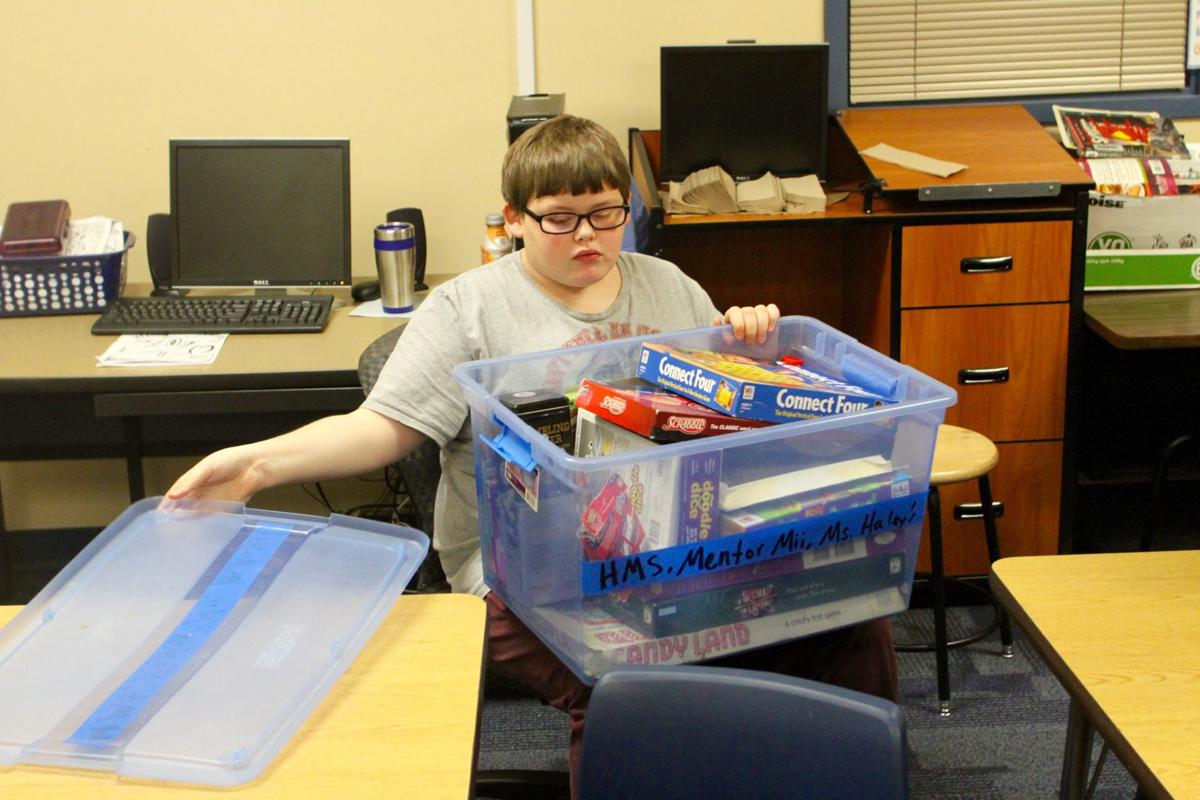 Hazelwood Middle School student Chris Earls, 13, meets with his mentor, Jerry Finn, every Tuesday to play games and, once a month, get a haircut.

Hazelwood Middle School student Chris Earls, 13, meets with his mentor, Jerry Finn, every Tuesday to play games and, once a month, get a haircut.

FLOYD COUNTY — One of the most crucial factors in ensuring positive outcomes in the lives of young people is the presence of role models.

These role models can come in the form of parents, extended family or family friends, among other possibilities. According to the Search Institute, children who receive some type of support from three or more non-parent adults are less likely to engage in dangerous behaviors.

It isn't uncommon, however, for a young person's socioeconomic circumstances to limit their access to those they could potentially look up to. For instance, in Floyd County, roughly a third of all children come from a single-parent household.

Instances like this often call for outside assistance in guiding the next generation. Enter the Southern Indiana Mentoring Partnership (SIMP), which has helped to connect adults with young people across the region for roughly a decade. With January being National Mentoring Month, those involved in the initiative are highlighting the importance of spending quality time with young people in need of role models.

“Mentoring has really been proven to help and support kids," said Sharon Jones, director of student programs and cultural responsiveness at New Albany-Floyd County Schools. "It’s amazing the improvement you see in behavior and grades."

Prior to joining the district in her current role, Jones was the principal at Slate Run Elementary School, where one of the first pilots for the mentorship program was launched. In the years since, the initiative has spread to every school in the district, with the exceptions of Floyds Knobs Elementary and Greenville Elementary.

“The motivation, quite naturally is the children," she said. "How can we help children succeed? That’s where we start, whether it’s academic, behavioral, to help them become good citizens in our world here... The whole point is we focus on how we can help our kids be successful emotionally and academically."

While Jones is involved in the behind-the-scenes work, such as vetting and training potential mentors, she said officials within each individual school usually take charge in finding potential mentees.

"Counselors tend to know which kids are in need, who might need a push," Jones said. "They can pinpoint that child that needs that extra help. Sometimes they don’t have that adult male figure in their life to give them that attention. Our mentor facilitators will seek them out.”

One of the largest mentorship programs in NAFCS can be found at Hazelwood Middle School. On Tuesday, Caesars Foundation Executive Director Jerry Finn and Mike Helton met with their mentees for their weekly hangout session.

Finn was introduced to mentoring through his wife, who was a counselor at Slate Run when the program was launched. Once his own children graduated high school, he decided to find others who might be in need of a role model.

For the last seven years, he has been involved in the program, currently mentoring four young people — two at Hazelwood, one at New Albany High School and another at Silver Creek Middle School.

"It’s just a matter of being present and building a relationship with them," Finn said. "The outcome is that you are one more caring adult in their life. All the data shows that we need a certain number of people in our lives to just genuinely care for us in order to be successful. Our goal is just to be another one of those people that can help make sure these students are successful.”

Helton recently retired from his career as a nurse. After moving back to the area not too long ago, he said he was approached by Finn about getting involved in mentoring.

“I’m kind of used to mentoring, you might say, because you do a lot of that with patients and families [in nursing]," Helton said. "[My wife] and I both like the opportunity to help out in the community, and maybe make a difference in a young person’s life.”

During Tuesday's lunch, Finn and Helton were joined by Hazelwood students Fella Gaona and Chris Earls, both 13 years old. There, the four chatted over their meals, discussing what they did over winter break, which came to end Monday.

After that, it was time for some fun, with the group opting to play the card game Uno.

Quality time with mentors isn't just confined to the walls of a school, though.

"With my old mentor, we usually went to an arcade just to have fun and play around," said Gaona, who has been involved with program since he was 7 years old. "We actually went fishing a few times, too.”

In Earls' case, Finn had a packed schedule ready for him once school let out.

“I’m taking Chris to get a haircut today," Finn said. "He and I both get haircuts once a month, and we’re going to go out shopping to get his Christmas gift. After that, we'll probably go get some dinner.”

Those interested in exploring mentoring opportunities can find more information at www.simentoring.org. According to Jones, more help is always needed.

“We’d love to have more people come on board," she said. "I think the adults get just as much out of it as the kids do. They fall in love with their mentee. That’s what I see out of it, the wonderful stories that have come from how they’ve each helped other.”