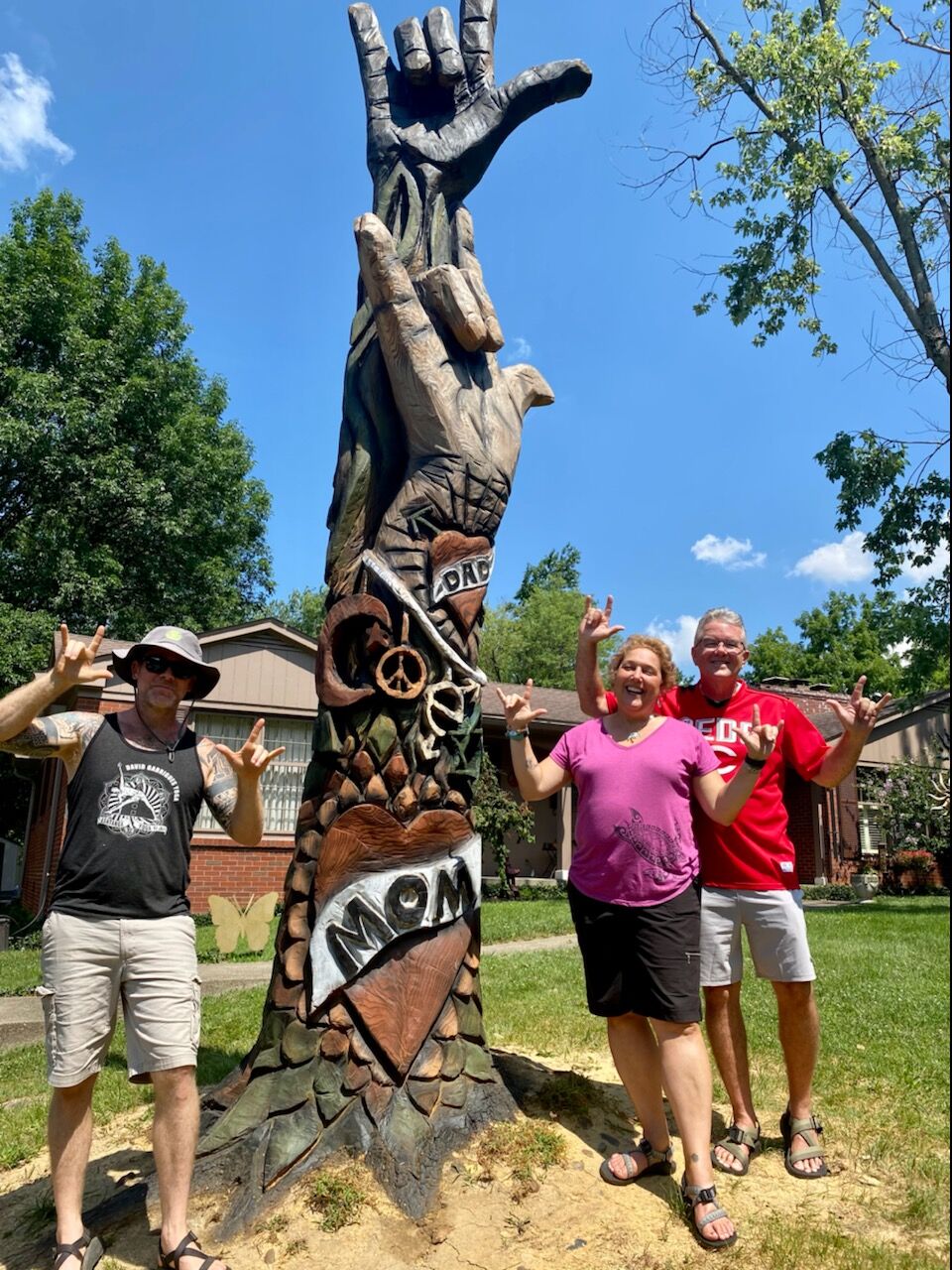 Artist Joe Autry, left, stands by the sculpture he created out of a tree for the New Albany couple Barbara Burke Fondren and Glenn Fondren. 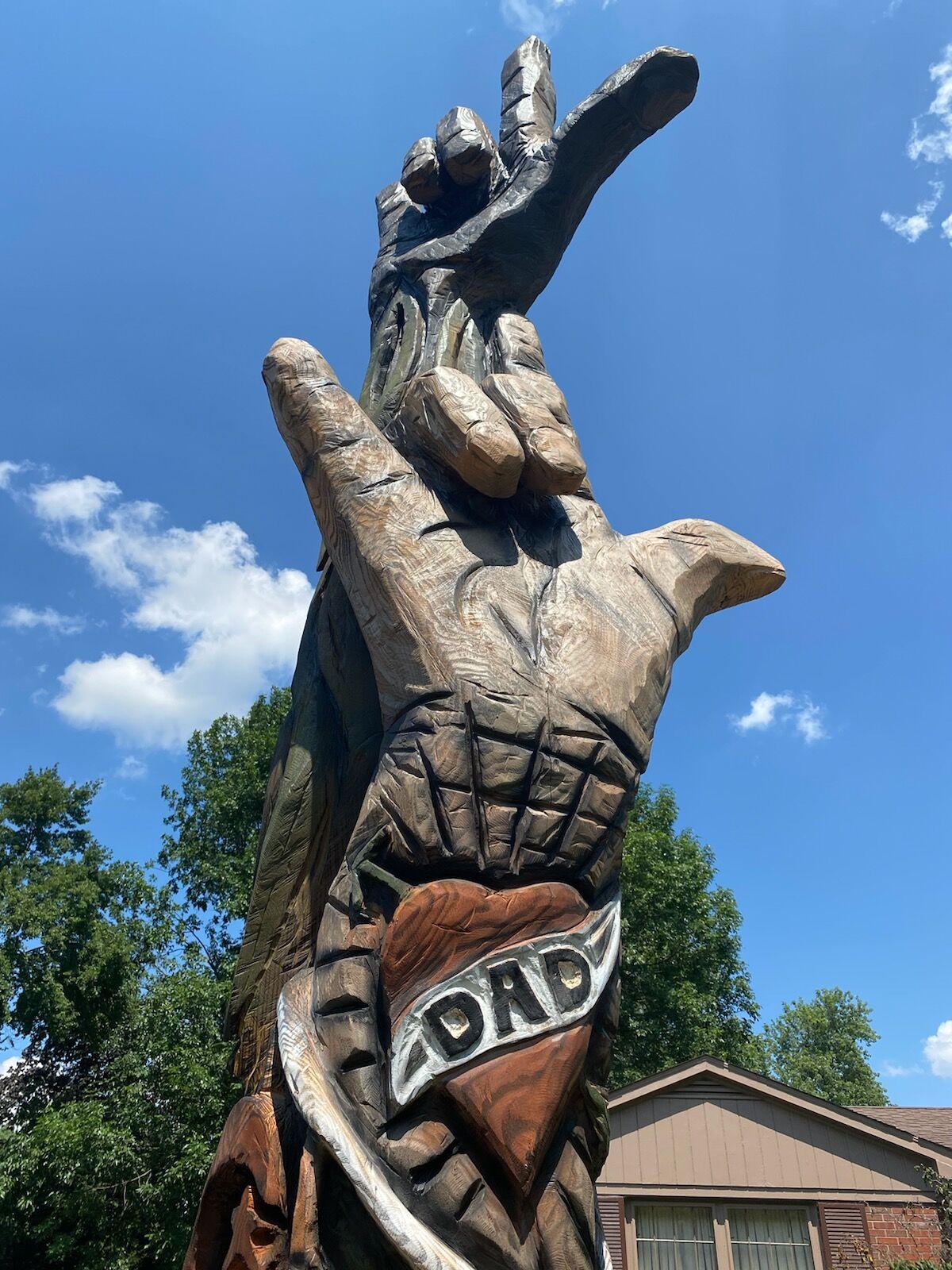 The Black hand and White hand uniting with the love gesture are a tip to the Black Lives Matter movement and a need for unity, artist Joe Autry said.

NEW ALBANY — Flashing the international sign of love, a Black hand and a White hand extend to the sky.

While the hands are actually pieces of wood, the hope is that the sculpture inspires a little peace and harmony in a world often defined by bitterness and division. But if nothing else, the tree-turned-art sculpture has drawn quite a bit of attention.

“With some of the emotion that's happening in our country right now, why not try to bring love back together?,” said Glenn Fondren, who along with his wife Barbara Burke Fondren, commissioned local artist Joe Autry to wield the sculpture in front of their house along Klerner Lane in New Albany.

“It's been amazing the number of people who have driven by, stopped, looked, parked in the driveway and taken pictures.”

Last year, the Fondrens were informed by a utility company that the ash tree in their front yard needed to come down. But they asked to leave part of the tree in place because they had an idea.

Burke Fondren is the director of Community Montessori, which is where Autry's children attend school. She was aware of his artistic talents, as Autry has, along with his other works, created over 30 tree sculptures in the Kentuckiana area.

The couple talked about how to salvage the tree, and they decided upon a general theme.

“We talked about some ideas centering around humanity, love and how we do something for this year with so many people struggling and not getting along,” Burke Fondren said.

They met with Autry, and his design elicited a joint “wow” reaction from the husband and wife.

Autry doesn't rush his work. When sculpting a tree, he envisions ways that his craftsmanship can compliment what nature already created.

He saw the branches, and eventually, he saw the pattern.

With his creative eye, Autry envisioned shaping the branches into two “I Love You” hand signs. As a show of unity, he wanted one hand to be Black and the other White.

“I felt like this was an opportunity to give a message with the gravity of the Black Lives Matter movement that happened in our area — to have one Black hand and one White hand together,” he said.

The symbolism doesn't stop with the hands.

The house was once occupied by Burke Fondren's parents, and even though they're gone, the Mom and Dad carved into the tree pay homage to their memories.

There are also Gaelic symbols on one side of tree as a nod to the couple's Irish roots.

At the bottom of one of the hands is a charm bracelet carving. Each of the charms represents a different world religion, with the inscription Coexist on the bracelet.

“I believe that if humanity can coexist, that would be the biggest movement in human evolution beyond going to space,” Autry said.

For more information on his art work, go to joeautrysculpture.com.