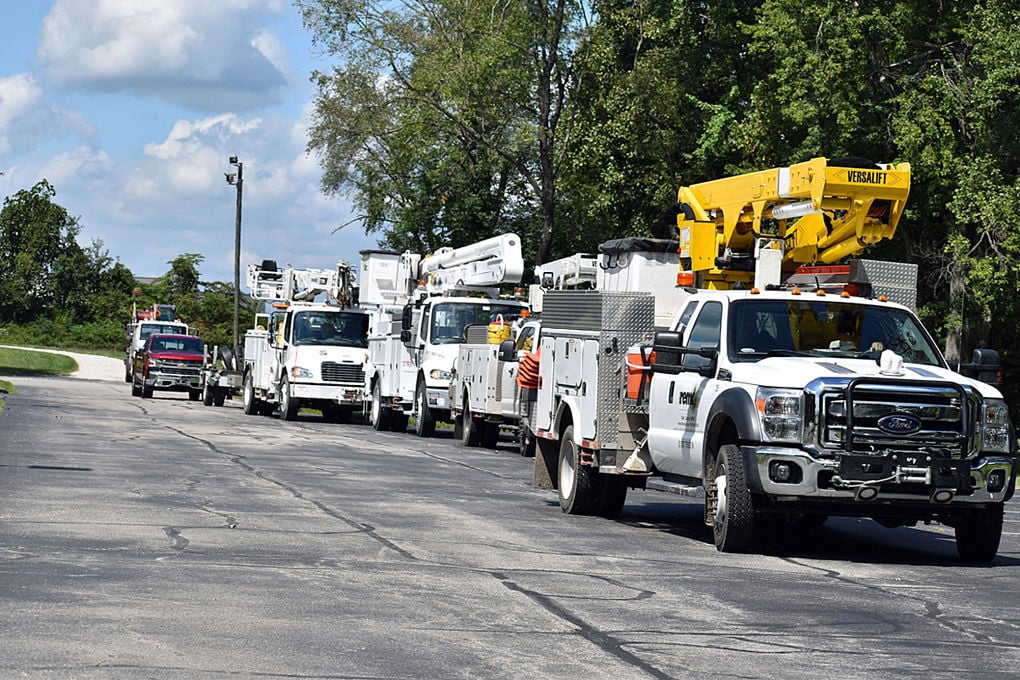 Sixteen linemen and nine trucks from five Southern Indiana electric cooperatives left Clark County REMC Monday to set up in central Florida, to await what's needed from them in the wake of Hurricane Dorian. In 2017, roughly 60 linemen left the same area to assist after Hurricane Irma. 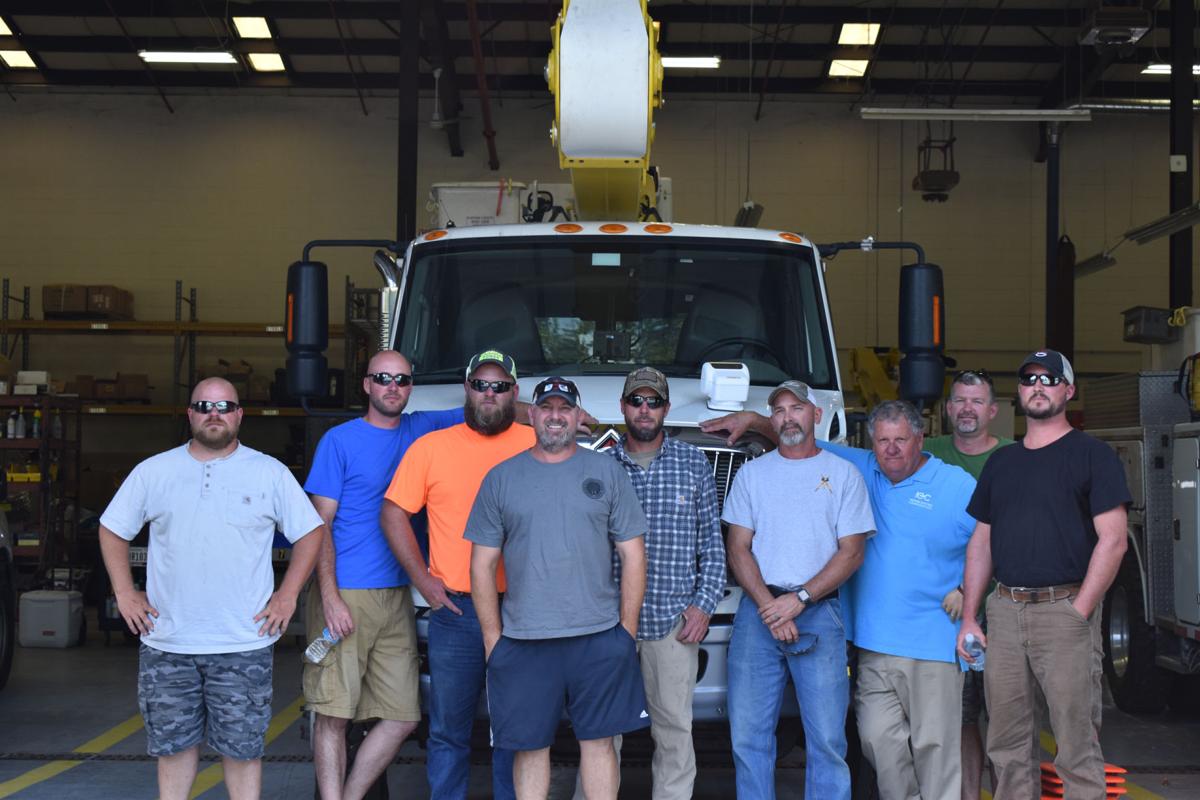 Sixteen linemen and two safety directors from Clark, Henry, Hendricks, Johnson and Morgan counties in Indiana headed to the Central Florida Electric Cooperative Monday, to set up for assistance ahead of Hurricane Dorian's potential U.S. landfall.

Sixteen linemen and nine trucks from five Southern Indiana electric cooperatives left Clark County REMC Monday to set up in central Florida, to await what's needed from them in the wake of Hurricane Dorian. In 2017, roughly 60 linemen left the same area to assist after Hurricane Irma.

Sixteen linemen and two safety directors from Clark, Henry, Hendricks, Johnson and Morgan counties in Indiana headed to the Central Florida Electric Cooperative Monday, to set up for assistance ahead of Hurricane Dorian's potential U.S. landfall.

SOUTHERN INDIANA — As Hurricane Dorian threatens landfall in the Southern United States over the next several days, electrical workers from Southern Indiana are making their way to Florida, ready to assist where needed.

On Monday, 16 linemen and nine trucks departed from Clark County REMC, heading to the Central Florida Electric Cooperative in Chiefland. Of these, two are from Clark County, which has a total of about a dozen linemen on staff. The other workers come from electric coops in Henry, Hendricks, Johnson and Morgan counties in Indiana.

Chuck Tiemann, with the Indiana Electric Cooperative, is traveling with the crews as one of two safety directors. He said when they got the request from Central Florida, the workers stepped up immediately.

"We put an email out and literally had the 16 linemen filled in 12 or 15 minutes," he said Tuesday. "Our guys responded really well."

Brian Omerso, manager of marketing and manager services at Clark County REMC, said the County was first contacted Friday morning, but it wasn't immediately certain when crews should travel South.

"They just didn't know what would happen because the path and speed of the storm was so up in the air," he said. "We didn't want to get down too early and take up hotel rooms while people were trying to evacuate but at the same time we didn't want to be traveling down in the middle of the storm."

The teams were expected to arrive in Florida early Tuesday evening and go over safety rules and voltage of the systems, and Tiemann said it would likely be Wednesday before they knew how much damage they could be looking at.

The National Weather Service reported Tuesday just before 5 p.m. that the storm, which had downgraded a category 2 storm after holding court over the Bahamas as a category 5, still had a potential to touch land in Florida and the Carolinas.

"We'll just have to wait and see," Tiemann said. "Let it hit and pick up the pieces when it's done. That's what we do."

He said if things upgrade and more workers are needed, they could get them rolling out within two to four hours.

Tiemann was also there two years ago, when the coops sent help down South for Hurricane Irma. That year, 60 workers from coops all over the state headed out from Clark County. But he remembers that as being quite a different situation.

"Irma was very unique," he said. "That was a big, big, big hurricane. That certainly took out a lot more electrical systems. This one is not as widespread."

In total there are more than 900 electrical cooperatives across all but a handful of states in the U.S., under the umbrella of the National Rural Electric Cooperative Association. Omerso, with Clark County, said they are always ready to help one another — it's built into the business model of the coops.

"That's the way cooperatives are designed to work," he said. "We're not just driven by the bottom line profit and shareholders; we try to operate for the benefit of our community and all communities.

The American Red Cross announced Tuesday that the call for volunteers requested to help in Southern states impacted by Hurricane Dorian has risen to 28 as the storm gets closer to U.S. landfall.

On Monday night, 12,200 people stayed in 171 Red Cross shelters in Florida, Georgia and Souther Carolina, according to a news release. Of these, the bulk were in Florida with 142 people in shelters. It has been estimated that up to 60,000 people may need help in these states as well as North Carolina, by the time the storm has dissipated.

The Red Cross is requesting donations of $10, that will help the organization "prepare for, respond to and help people recover from disasters big and small," according to the news release.

To donate or for more information, visit www.redcross.org or call 1-800-RED CROSS. Donations may also be sent by texting Dorian to 90999. The organization also urges people to help by giving blood. Although the Indiana chapter does not usually collect or distribute blood in Florida, around 350 blood products have been there this week so far.

IF YOU ARE IN THE STORM AREA

• Turn on your TV/radio or check your city/county website every 30 minutes in order to get the latest weather updates and emergency instructions.

• If told to evacuate, do so immediately. Do not drive around barricades, or through high water. Remember, if you encounter flooded roadways, turn around, don’t drown!

• Know how you’ll communicate with family members once the storm passes. You can call, text, email or use social media. Remember that during disasters, text instead of calling because phone lines are often overloaded.

• Anyone who plans to stay in a Red Cross shelter should bring prescription medications, extra clothing, pillows, blankets, hygiene supplies, other comfort items and important documents. Don’t forget to bring any special items for children, such as diapers, formula and toys, or for family members who have unique needs.

• Fill you car's gas tank in case an evacuation notice is issued.

• Build an emergency kit that contains supplies for about three days, to include a gallon of water per person per day, non-perishable food, a flashlight and extra batteries, a first aid kit, medications and copies of important documents. Other recommended items are available at redcross.org/kit. Remember items for young children such as diapers, and family members with special medical needs.

• Don’t forget your pets. Bring them indoors and maintain direct control of them. Prepare an emergency kit for your pets, including sturdy leashes or pet carriers, food and water, bowls, cat litter and pan, and photos of you with your pet in case they get lost. Full details are available on redcross.org.

• Before the storm hits, find a place to store outside items such as lawn furniture, toys, gardening tools and trash cans to prevent them from being moved by high winds and possibly hurting someone.

• Protect windows with permanent storm shutters or invest in one-half inch marine plywood that is pre-cut to fit your doors and windows.

• Clear loose and clogged rain gutters and downspouts to prevent flooding and unnecessary pressure on the awnings.

Beverly Elaine Pooler, 70, passed away peacefully at Norton's Hospital, surrounded by her loved ones. Beverly was born to Homer and Faye Pooler on September 22, 1949, in Jeffersonville, Indiana. She graduated from Silver Creek High School in 1967. Beverly was a loyal and valued employee of C…