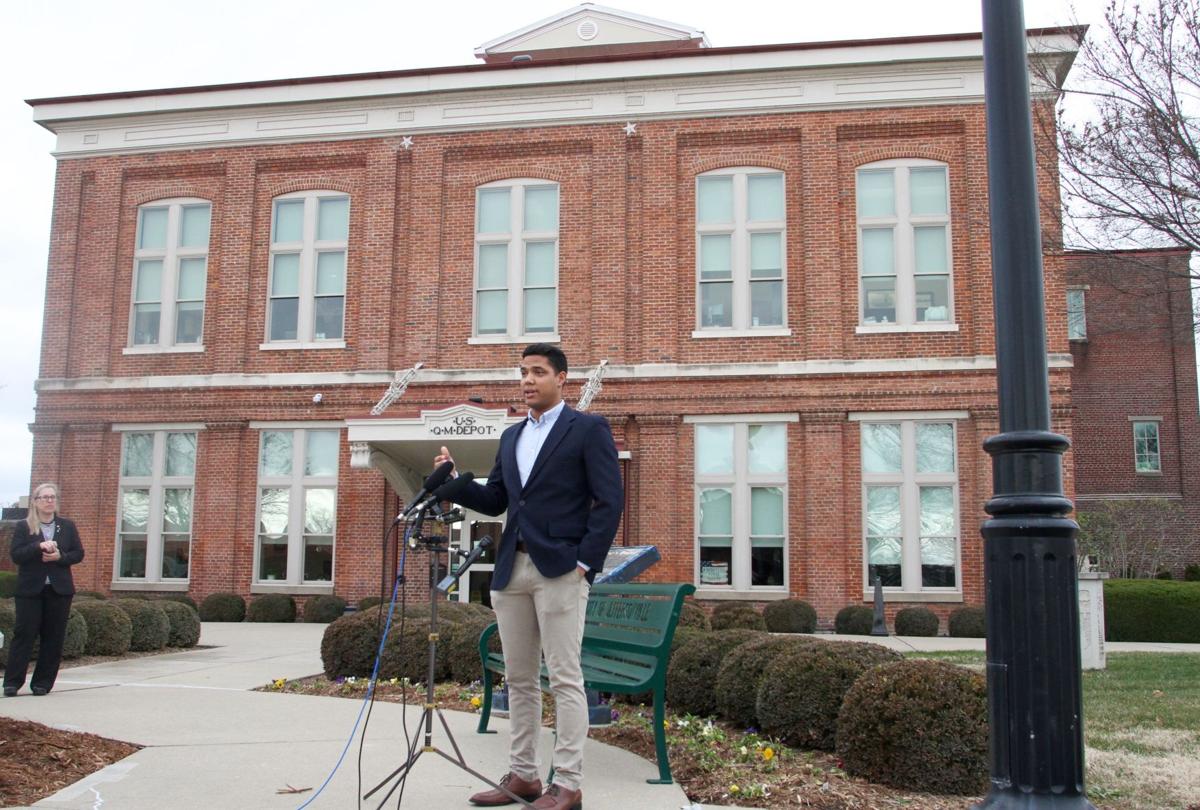 Evan Stoner, founder of Southern Indiana Pride, announced a renewed push by the organization to get a fairness ordinance on the books in front of Jeffersonville City Hall on Friday. 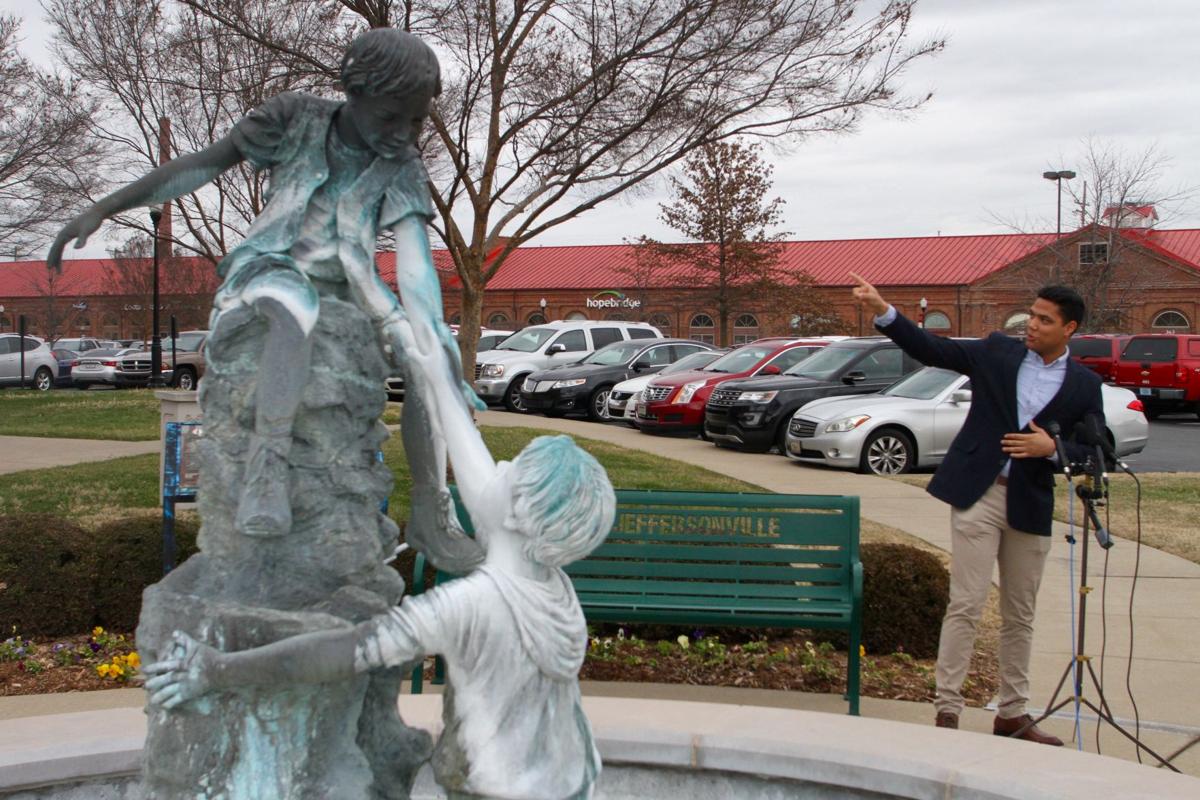 Evan Stoner, founder of Southern Indiana Pride, announced a renewed push by the organization to get a fairness ordinance on the books in front of Jeffersonville City Hall on Friday.

JEFFERSONVILLE — Protections for members of the LGBTQ community are far from robust in the Hoosier state.

Each year the Human Rights Campaign (HRC) releases its State Equality Index, which outlines steps taken in each state to prevent discrimination toward LGBTQ people. In 2018, Indiana was among the 28 states listed in the lowest-rated category in HRC's ranking system, alongside states like Alabama and Mississippi.

Under current Indiana law, there are no explicit protections regarding housing and public accommodations for LGBTQ people, nor any explicit employment protections for transgender people.

“Because the State of Indiana has refused to act, that’s why cities across the state have decided to take matters into their own hands and pass fairness ordinances on the local level," said Evan Stoner, founder of Southern Indiana Pride. "That’s the step we’re taking today, to announce that we’re going to be pushing for this.”

On Friday, Stoner held a press conference in front of Jeffersonville City Hall to announce a renewed push for a fairness ordinance that would better protect the city's LGBTQ population. A similar effort was launched in 2016, but the Jeffersonville City Council took no action on it.

Now, Stoner said his vision and path forward is more clear, and he hopes more progress can be made. What hasn't changed, he said, is the current state of affairs for LGBTQ Hoosiers.

The next step for Stoner and Southern Indiana Pride is to mobilize support throughout the city. Stoner said he hopes to gather everyday citizens and leaders from the spheres of faith, politics and business for a discussion on the matter.

A town hall event is scheduled for Jan. 22 at the Jeffersonville Township Public Library.

"We’ll invite everybody, basically, just to make their voices heard," Stoner said. "We’re at an incredibly divided moment in our nation’s history and in our state’s history. We want it to be a community conversation for everybody — either those for or opposing — to come together and to have a real conversation about discrimination and about what we can do going forward to make sure that we’re a city that ensures civil rights.”

Stoner said that Mayor Mike Moore has been a supporter of the cause in the past, but added that it's going to take a sizable coalition to have a different result than 2016. Rather than demanding support, he said he views the mayor and the city council as partners working to create something that will ultimately be a positive for the city.

State Rep. Rita Fleming, D-Jeffersonville, said that while she believes her city is already a very "fair" one, it's important for that to be documented. In doing so, she said it sends a clear message that Jeffersonville "welcomes all people," while also making the city look "compassionate and intelligent."

“It’s unfortunate that it doesn’t seem like it's going to gain any more traction at the state level," Fleming said. "The governor seems pretty satisfied with what's passed. Instead of just sitting around and waiting, I think it’s nice to take initiative with people showing how our city can handle it. Companies might not want to locate here without knowing everyone will be accepted.”

Clark County Democratic Party Chair Kate Miller said a fairness ordinance is necessary. Jeffersonville, she said, is "ripe" for LGBTQ reform and diversity reform as a whole. She noted that there have been instances of people in power not behaving how "they should act," characterizing it as "pretty shameful."

Last year, the city was on the verge of a diversity training initiative, but Miller said that process ended abruptly.

"We were steps away from a diversity training, but the door was shut and shut very loudly," she said. "To say that this is a need is an understatement. We have to progress in this town. We have to get over the line of thought that we all have to look alike and think alike."

The fairness ordinance would be a "good start," according to Miller, adding that she'd also like to see diversity training come to fruition. The likelihood of the ordinance passing through the city, however, isn't promising from her perspective.

“My hope is that it would gain traction, and that it would spawn into other initiatives like diversity training," Miller said. "My fear is that with the current electorate, it won’t get very far.”

Council member Bill Burns, whose first meeting as a sitting member came on Jan. 6, said that though he's yet to see the specifics of the ordinance, he would enter the discussion with an "open mind."

Fellow council member Ron Ellis, however, made it clear that he would oppose the ordinance. Ellis, who is also a United Methodist pastor, cited some of his religious beliefs in his decision.

“I think right now, everybody has pretty much the same rights with the ordinances on the books," he said. "I don’t see a reason for a fairness ordinance.”

Though the future of a fairness ordinance in Jeffersonville is uncertain, Stoner looks to what has been done in neighboring cities as a standard to achieve.

In 2013, New Albany updated its human rights ordinance to reflect changes similar to those sought by Stoner.

"We added sexual orientation, gender identity and several other variables in 2013," New Albany City Council Vice President Greg Phipps said. "We were making sure that all groups were included in that and bringing it up to the 21st century standard. In the absence of having state protection for it, or national protection, it makes it even more important for cities and towns to adopt those for protection."

Across the Ohio River, Louisville received a perfect score of 100 from the HRC for its support of the LGBTQ population there. It's Stoner's hope that Jeffersonville can one day match that achievement.

“In 50 years, I want us to have a 100 percent rating from the Human Rights Campaign for our friendliness and our acceptance and inclusion of the LGBT community," he said.