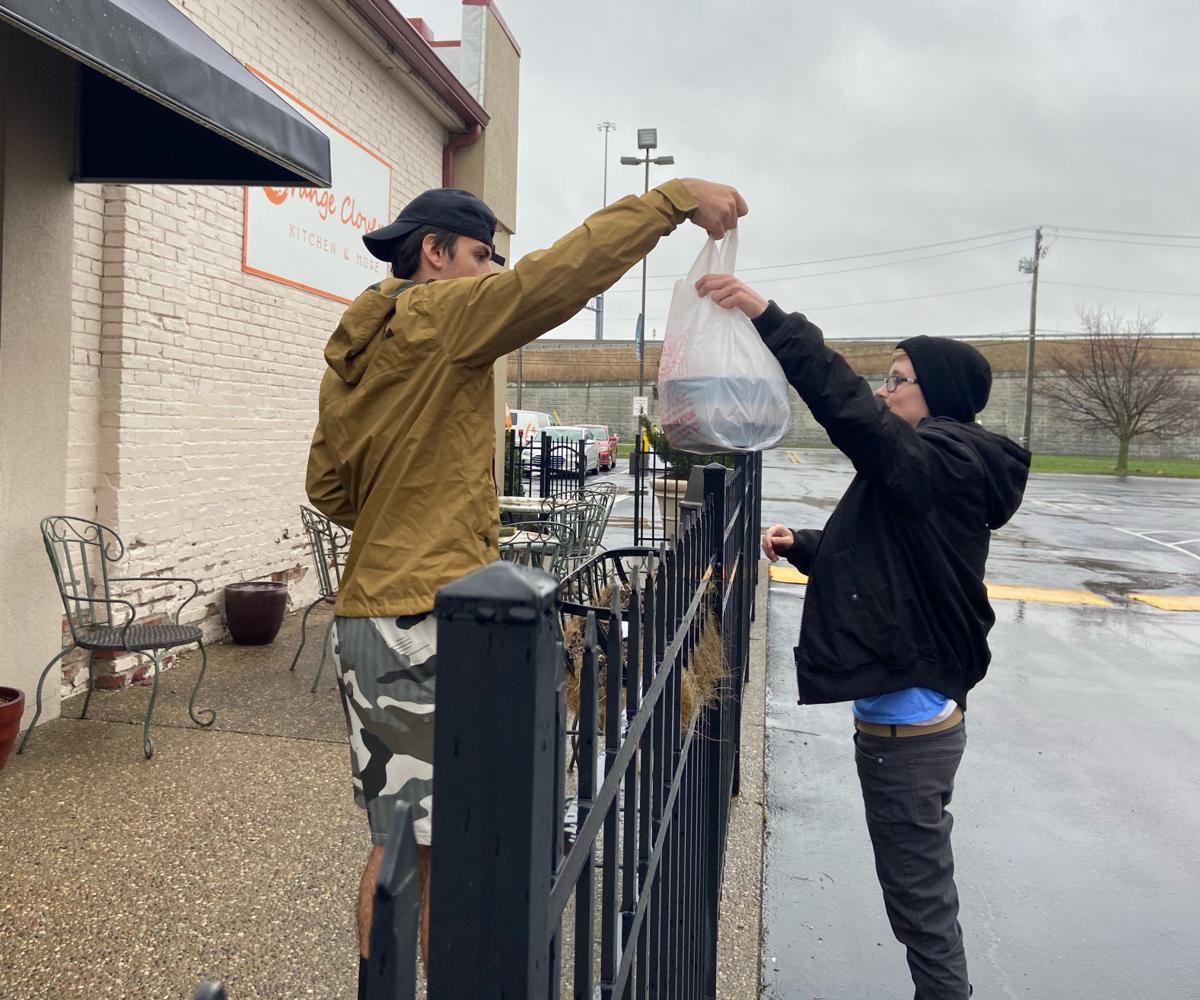 Brittanie Cruse takes her carryout order from server Jason Hartsfield at Orange Clover in Jeffersonville at the restaurant’s curbside pickup. Indiana restaurants have switched to takeout and delivery only due to the coronavirus. 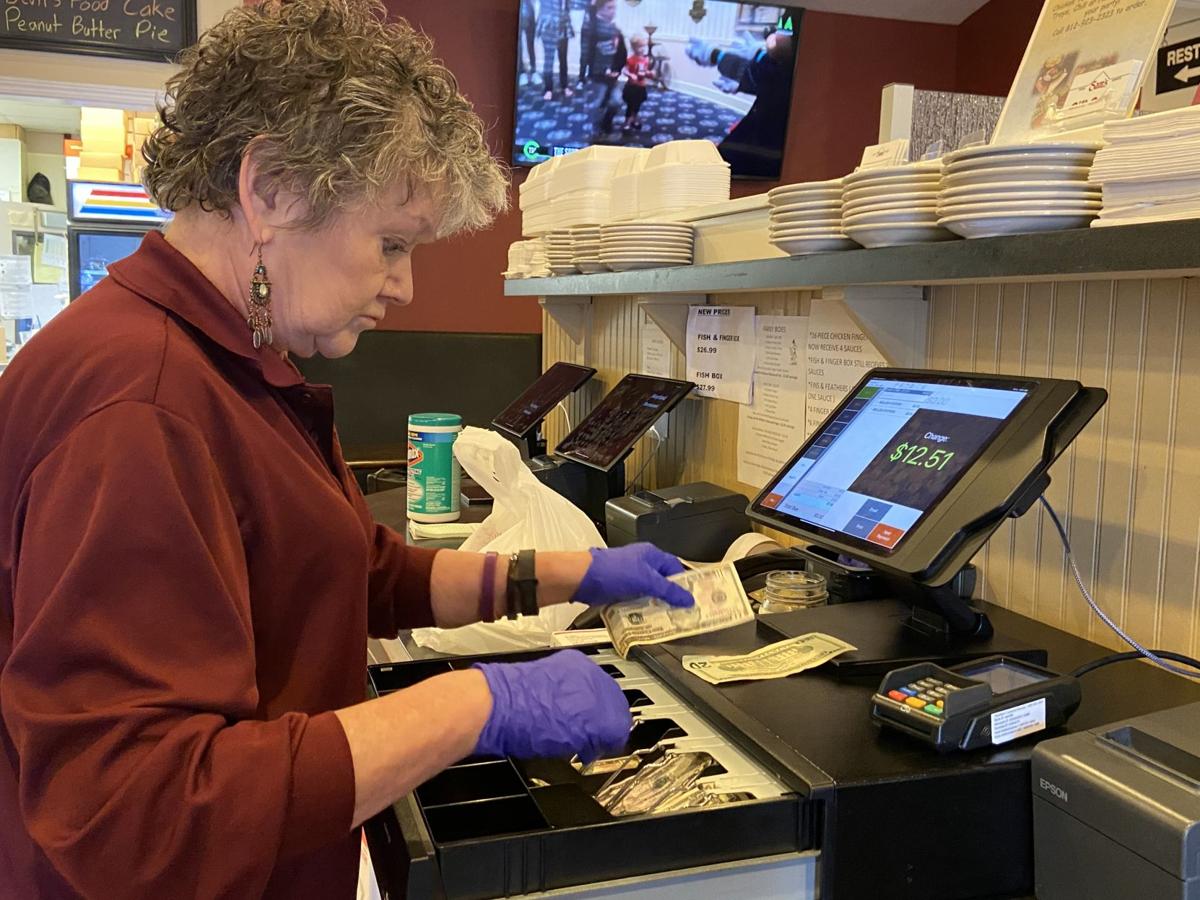 Manager Jane Alcorn uses gloves to complete a transaction Thursday as a customer picks up a takeout order at Sam’s Food & Spirits in Floyds Knobs. The restaurant now only offers takeout and curbside pickup. 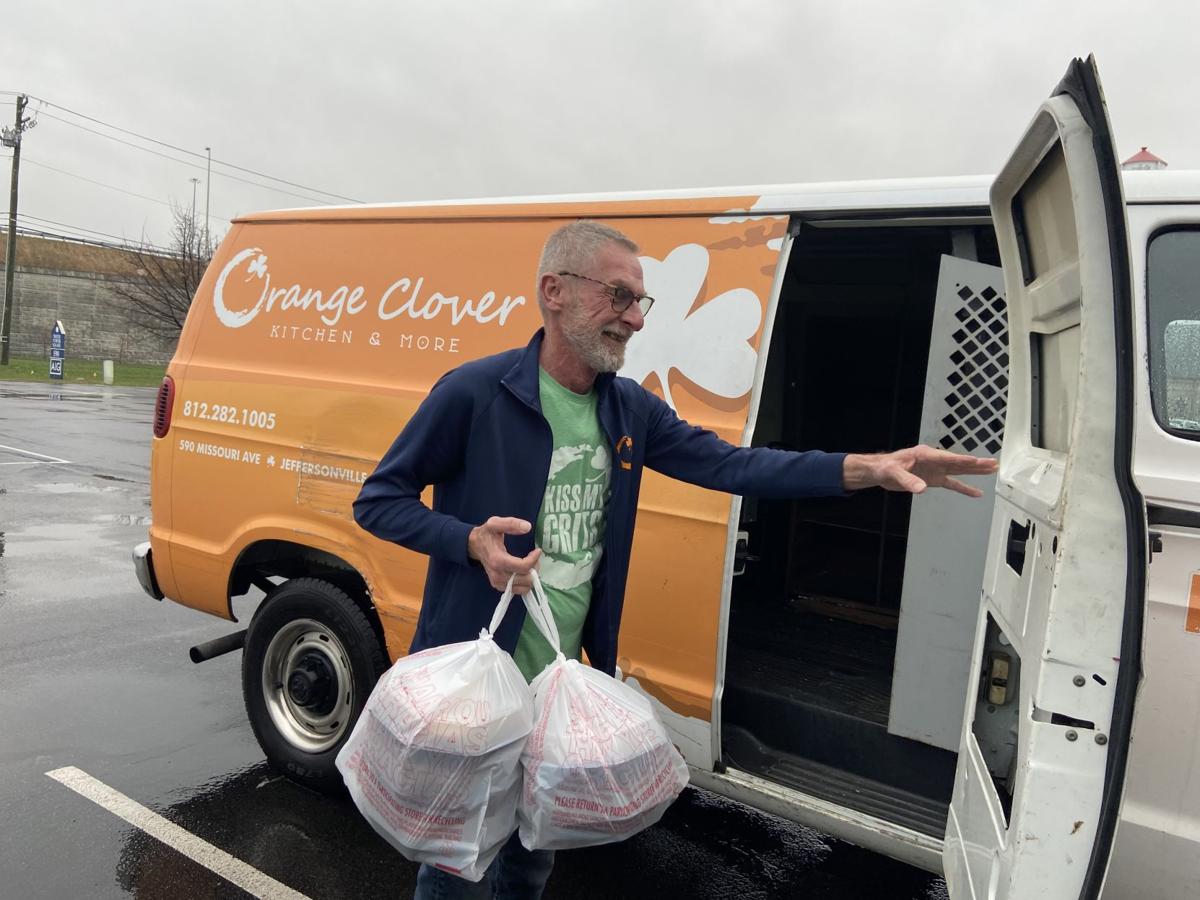 Mike Hall loads a food delivery in a van Thursday at Orange Clover in Jeffersonville. Due to the coronavirus, the restaurant only offers curbside pickup and delivery. 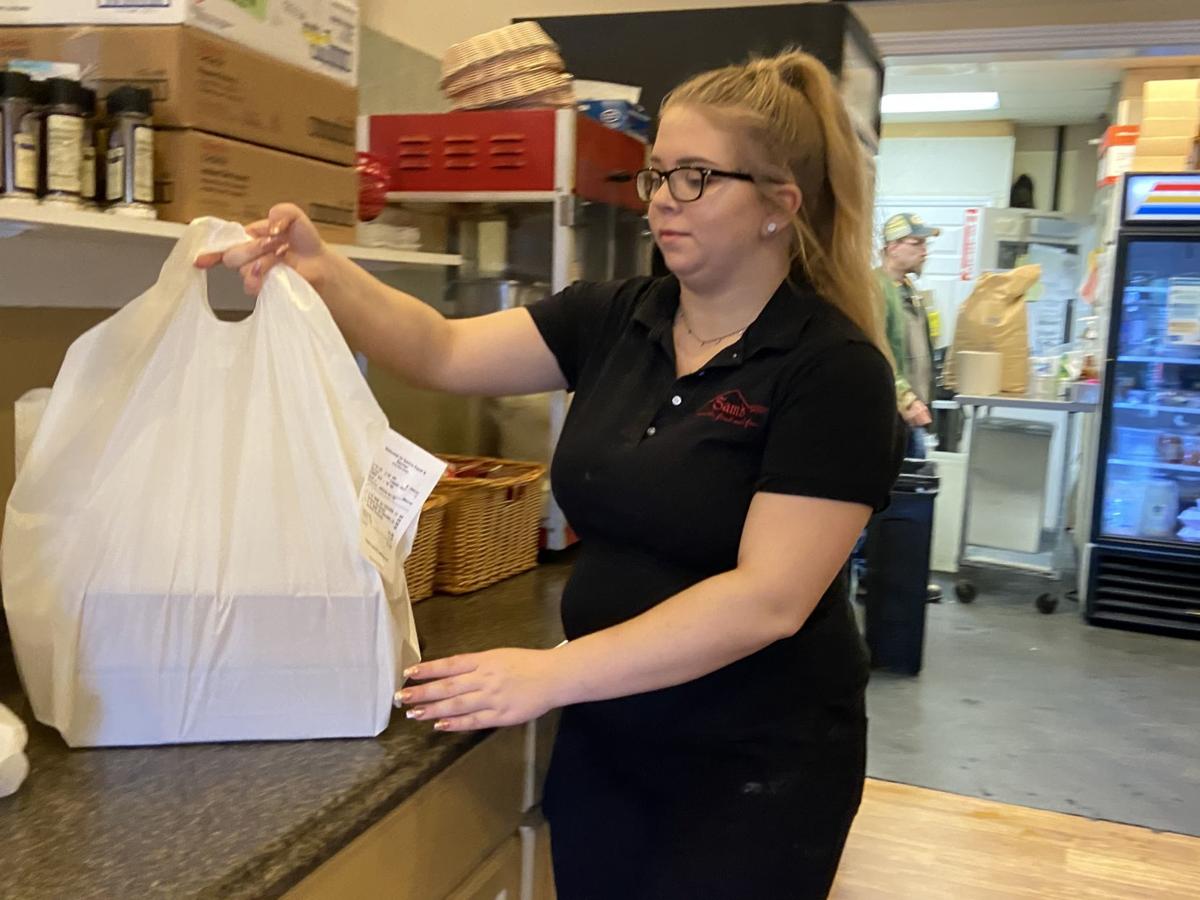 Brittanie Cruse takes her carryout order from server Jason Hartsfield at Orange Clover in Jeffersonville at the restaurant’s curbside pickup. Indiana restaurants have switched to takeout and delivery only due to the coronavirus.

Manager Jane Alcorn uses gloves to complete a transaction Thursday as a customer picks up a takeout order at Sam’s Food & Spirits in Floyds Knobs. The restaurant now only offers takeout and curbside pickup.

Mike Hall loads a food delivery in a van Thursday at Orange Clover in Jeffersonville. Due to the coronavirus, the restaurant only offers curbside pickup and delivery.

SOUTHERN INDIANA — With statewide closures of in-person dining services at food establishments, Southern Indiana restaurants and bars are facing difficult times in the midst of the coronavirus pandemic.

Many local restaurants have switched to delivery, takeout and curbside pickup, while others have suspended operations completely until full service returns. The mandated closures that went into effect Monday have meant layoffs for many service industry workers as restaurants scale back their operations.

This week, a public Facebook group called Southern Indiana Takeout was launched to compile posts from local restaurants offering takeout services, and as of 5 p.m. Thursday, the group had already reached 1,336 members.

Orange Clover Kitchen & More in Jeffersonville is offering both curbside pickup and delivery. Service Manager Jordan Pedolzky said business has remained steady throughout the week, and only cut two people, who were both teenagers living at home with parents, have been cut from its main staff. The restaurant intends to continue running over the next weeks with its full staff.

The transition from traditional takeout to curbside pickup has come with some challenges, but over the past few days, the process has become smoother, she said. The restaurant has always offered delivery with a minimum of $50, and it continues to offer the same service with the addition of deals such as free meals for kids.

“We appreciate the customers that we have, because it’s been our regulars who have been coming everyday and getting lunch and dinners to take home to their families, and we’re so excited that we get to be a part of that, even in times like this,” Pedolzky said.

Although Pints & Union in downtown New Albany sells plenty of food typically, the closure of its bar and dining room has been tough, and the pub has had to dramatically scale back its service this week. It is open from 4 p.m. to 8 p.m. daily for curbside pickup.

Pints & Union owner Joe Phillips said the pub adjusted as rapidly as possible to the coronavirus situation, but financially, this week has been “devastating.” The pub is now only able to employ two people, and others are having to file for unemployment in the meantime.

Right now, Pints & Union is taking it day by day, he said. On Tuesday, the pub was open from 11 a.m. to 8 p.m., but sales were slow during the day, and it switched to a smaller window of time during the evening. The pub has seen mostly regulars so far, and on Wednesday, a local service industry worker bought a $200 Pints & Union gift card.

“They were predominantly our loyal regulars — people who understand the impact that this will have,” Phillips said. “There were no lines, but it was really supportive people with really kind hearts trying to tip the staff above and beyond.”

The pub will also offer meals to service industry workers starting next week.

The Earl, a bar in downtown New Albany, can no longer operate as usual, but it’s not suspending service during this time. The bar has already operated with a license to sell beer and liquor to go, and it will continue to sell alcoholic beverages in this way. The bar owners are also taking care of the team of five employees so that they can continue their jobs, according to social media coordinator/events director Andrew Nicholson.

“Our overall position on this is to stay calm, be safe and be smart more than anything,” he said. “We look forward to having everyone back once we’re able to do that.”

From 5 p.m to 9 p.m., Thursday through Saturday, customers can purchase packaged beverages such as six packs of domestic/craft beer or bottles of bourbon. The staff is also offering cocktail kits for drinks such as an Old Fashioned that people can purchase and make at home, and during the closure of bar service, The Earl’s Facebook page will feature video tutorials for making basic cocktails.

This week, The Charlestown Pizza Company in Charlestown’s city square has seen an increase in carryouts, which normally consist of about a third of the restaurant’s sales. The restaurant usually offers both carryout and dine-in services, but it does not offer delivery. Although it is losing sales on draft beer, it does have a license to sell alcoholic beverages to go.

The restaurant was short-staffed to begin with, and they are rotating shifts to allow everyone to work and give them as many hours as possible, according to co-owner Tajana Johann. She feels that The Charlestown Pizza Company will be able to hang on until things get back to normal, she said.

“It’s going to be a struggle, and we’re doing what can to keep as much staff as possible,” she said.

Sam Anderson with Sam’s Food & Spirits in Floyds Knobs said carryout sales at the Highlander Point restaurant have doubled this week. The restaurant has already offered a strong carryout service consisting of 30 percent of its usual sales, and it currently offers both takeout/curbside pickup.

The restaurant had to lay off all of its server staff, and most of its catering services from March through May have been cancelled, according to Anderson. They are trying to keep the staff employed as long as they possibly can, he said.

“We’re doing our best to be ready when we get to the other side of this,” he said.