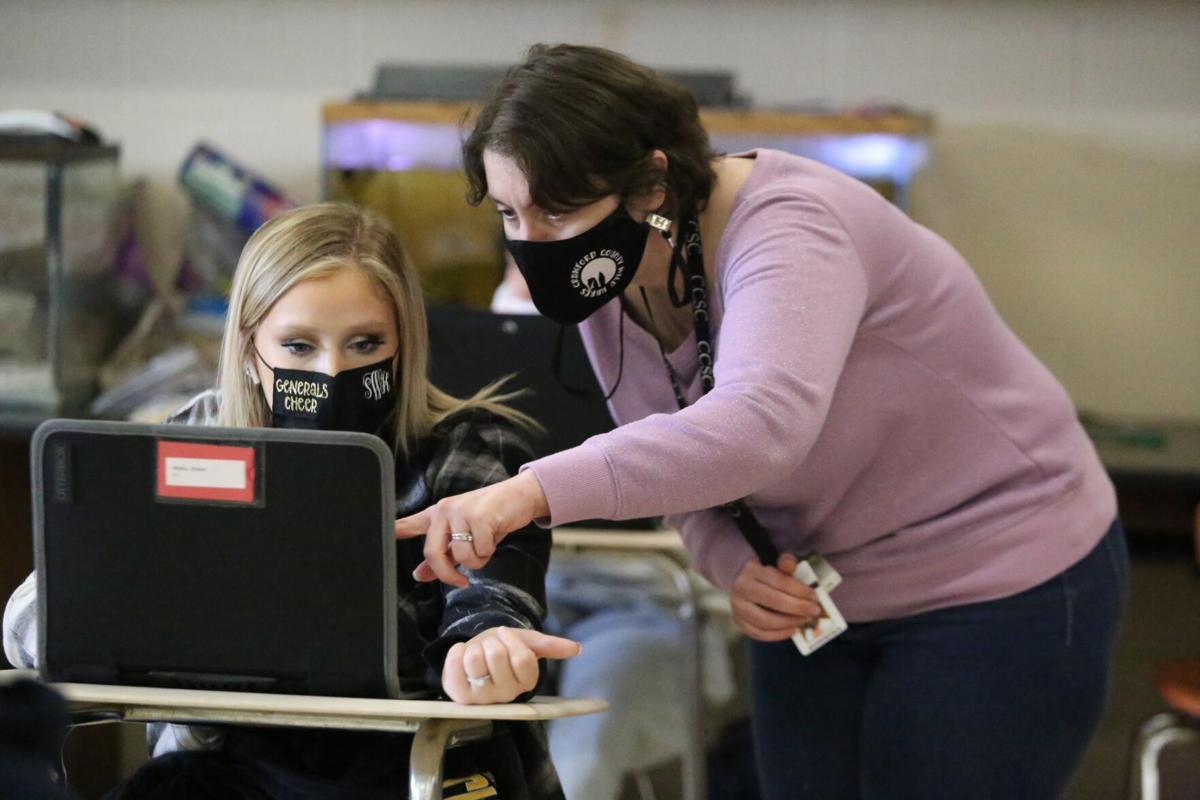 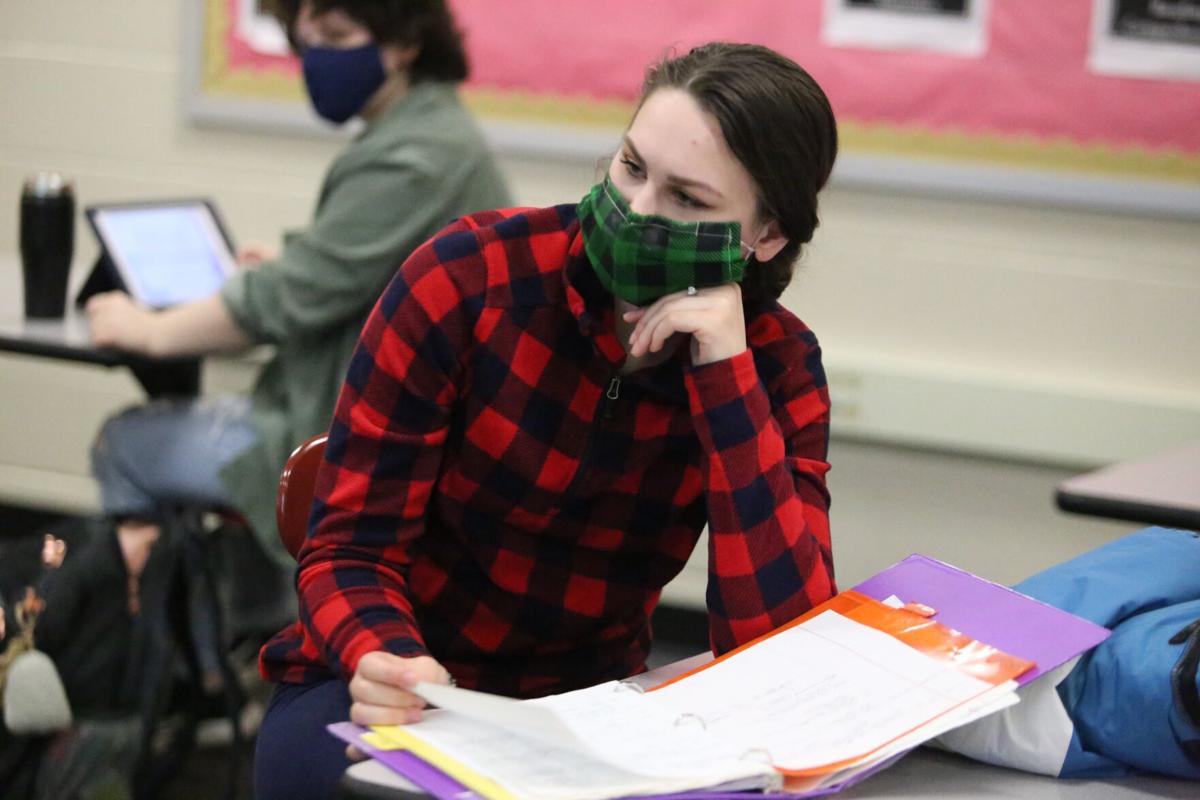 Senior Zoe Shiner worked on a calculus assignment Monday during study hall at New Albany High School in March. NAFC Superintendent Brad Snyder said he is “very appreciative and grateful” for the district to receive such a large sum of money, and he notes “it’s going to take a lot of work” to put together the specific plans.

Senior Zoe Shiner worked on a calculus assignment Monday during study hall at New Albany High School in March. NAFC Superintendent Brad Snyder said he is “very appreciative and grateful” for the district to receive such a large sum of money, and he notes “it’s going to take a lot of work” to put together the specific plans.

SOUTHERN INDIANA — In Clark and Floyd counties, public school districts are set to receive a combined $36 million from the third round of federal pandemic relief.

The American Rescue Plan Act funds can be used to reimburse approved COVID-19-related expenses through September 2024.

Schools must direct at least 20% of the funds to addressing learning loss interventions such as summer school or after-school programs.

All of the schools with the exception of Greater Clark talked about some of their plans while acknowledging the details are still preliminary.

Greater Clark Superintendent Mark Laughner said the administration is not ready to comment on the specific uses for the stimulus funding until there are "concrete plans in place."

NAFC Superintendent Brad Snyder said the district will likely direct the $16 million in funding to areas such as social/emotional learning, software and capital projects such as air quality improvements.

Snyder said he is “very appreciative and grateful” for the district to receive such a large sum of money, and he notes “it’s going to take a lot of work” to put together the specific plans.

The stimulus funding should help the district maintain and possibly increase its mental health services, according to Snyder. A $1.5 million Lilly Endowment grant allowed the district to expand mental services in schools, but it will expire by the end of this school year.

In 2020, a school safety referendum that would have funded mental health services was rejected by Floyd County voters. Snyder said the “timing couldn’t have been better” for the $16 million from federal pandemic relief.

“It’s good we don’t have to shift into downsizing [mental health services] like we were going to have to,” Snyder said. “If we need to expand it, we will.”

The nearly $7 million the district was allocated for the second round of the stimulus is supporting summer school and intersession tutoring, he said.

The district will look at the turnout for these programs this summer and fall to determine plans for future programming using the third round of funding, Snyder said.

Right now, the district is focused on planning its programming for the allocation for the second round of stimulus funding, which totaled more than $900,000. This summer, programs to address learning gaps will include a “general success” camp for all grades and a weeklong camp for high-ability students.

Bennett hopes to extend those programs with the third round of stimulus funding.

“We will not make up for learning loss in a month’s time in the summer, so this probably needs to be for the long haul,” Bennett said.

She wants funding to “support teachers so teachers can support students,” including special certifications for teachers and hiring additional support staff.

“We understand it is one-time money, so we also need to be mindful — we need to be prudent and thoughtful in how we spend it,” Bennett said. “We’re very grateful and feel this will go a long way in helping us.”

Silver Creek Interim Superintendent Thomas Brillhart said the district has formed a committee consisting of administrators and teachers to develop a “holistic list of items” to help kids recover from learning loss using the $1.7 million in funding.

The district was also allocated $787,062 for the second round of stimulus funding.

Brillhart said the stimulus funding will support an expanded summer school program and after-school remediation in the next couple of school years.

Mental health and nursing services are other areas the funding could support, he said.

A portion of the funds will support Silver Creek’s virtual academy model in adapting it for demands in the 2021-22 and 2022-23 school years, Brillhart said. Unlike this school year, virtual students will not be integrated into a class with in-person students.

He emphasizes that the plans for the stimulus funding are flexible and will likely change in the future.

“For the most part, everything is penciled in — we’re not using a pen at this point,” Brillhart said.”

Lisa Gardner, director of curriculum and instruction at Borden-Henryville, said the stimulus funding will support the district’s “back on track” plan.

In addition to the $1.3 million in the third round, the district was allocated $593,748 in the second round of stimulus funding.

The funds will also support “rebuilding” the district’s virtual learning program, which is planned to be a “customized” in-house program with Borden-Henryville teachers supplemented by an outside vendor, Gardner said.

The district is also planning to support more dual credit certifications for teachers.

“It’s important for staff to understand we have a new normal, and these things need to be a top priority to make sure we’re educating the whole child,” she said.