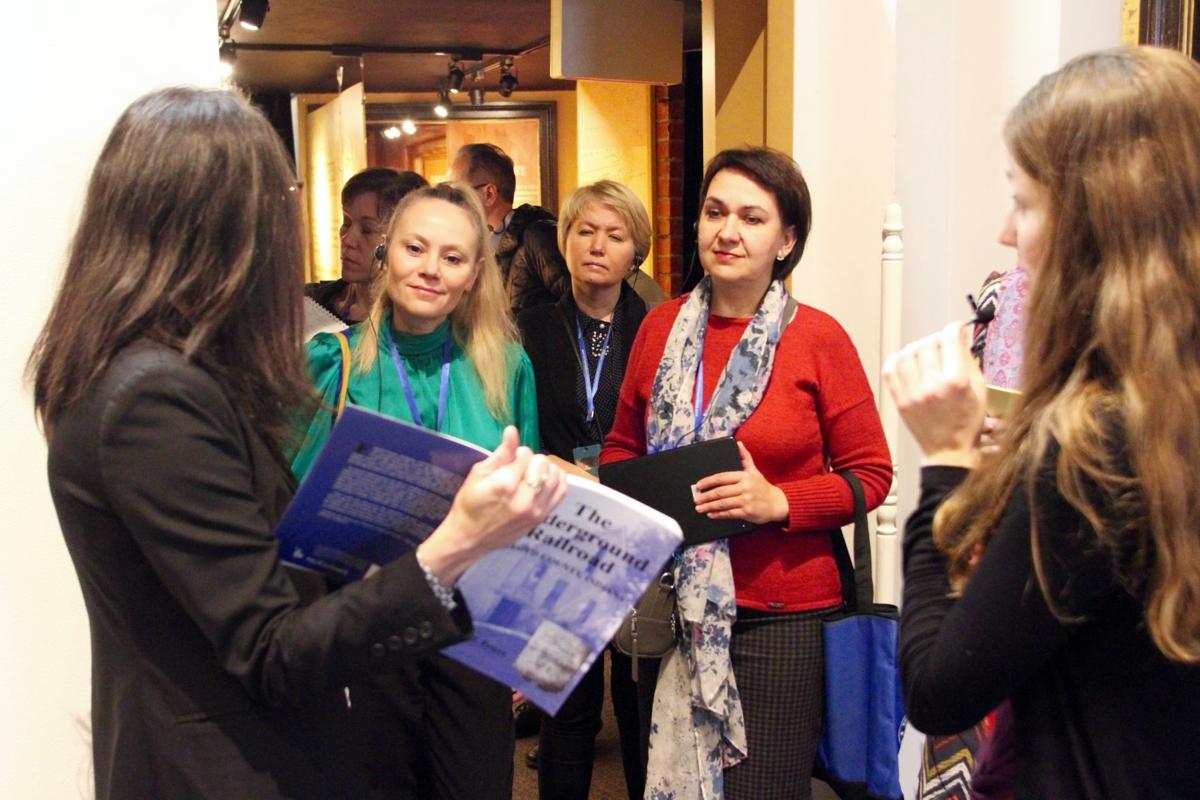 Carnegie Center for Art and History director Eileen Yanoviak discussed New Albany's role in the Underground Railroad with visitors from Belarus during their trip to the city. 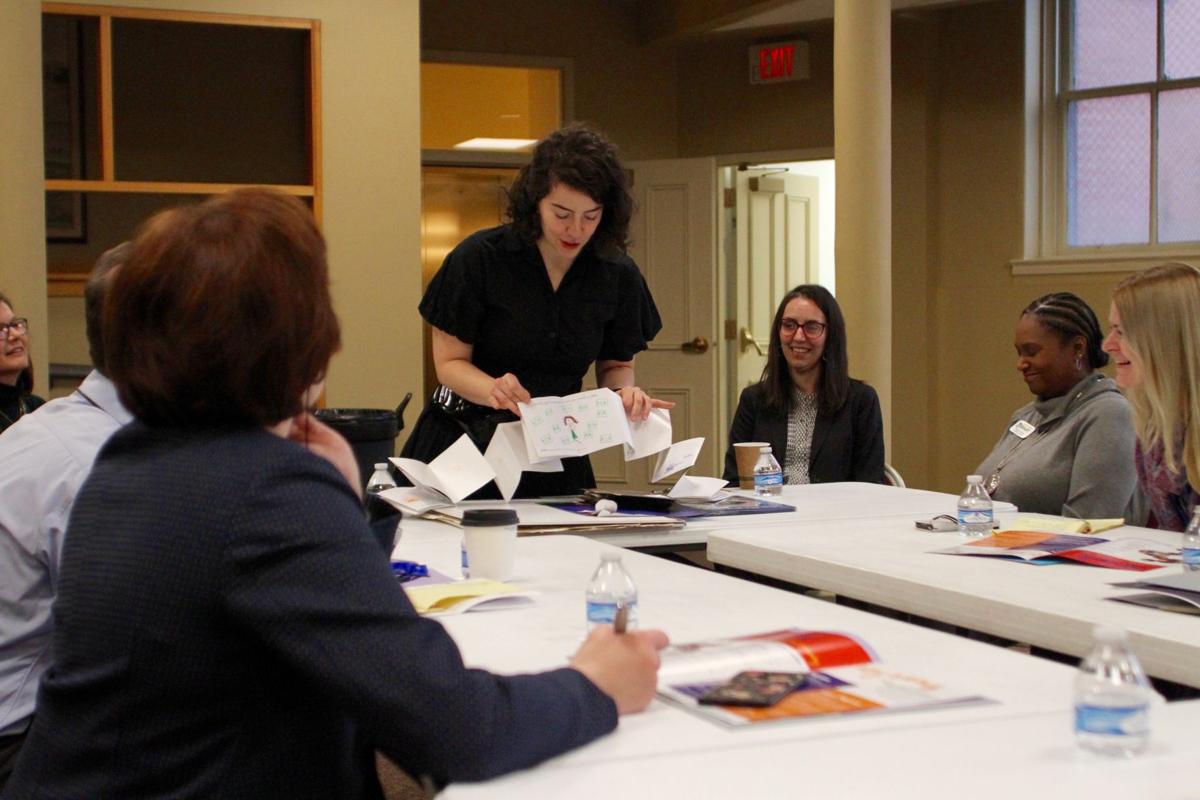 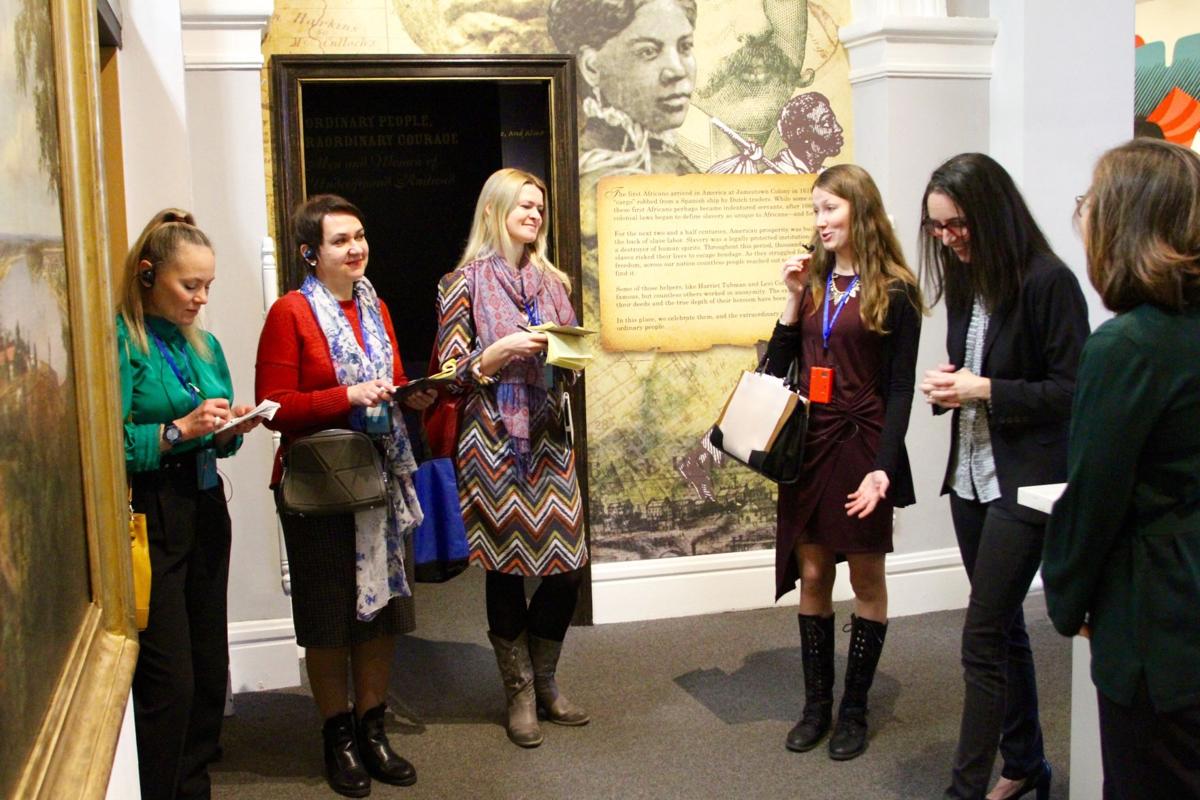 During their trip to New Albany and other cities across the country, five library professionals from Belarus learned about the role of libraries in American communities.

Carnegie Center for Art and History director Eileen Yanoviak discussed New Albany's role in the Underground Railroad with visitors from Belarus during their trip to the city.

During their trip to New Albany and other cities across the country, five library professionals from Belarus learned about the role of libraries in American communities.

NEW ALBANY — Knowledge of Belarus may not be in abundance in Southern Indiana.

One would imagine that knowledge of Southern Indiana is similarly scarce in Belarus, with the two areas being separated by right around 5,000 miles. Despite Louisville and its surrounding communities’ lack of global notoriety relative to larger American cities, the Ohio River Valley welcomed a group of five Belarusian library professionals as part of the U.S. Department of State International Visitor Leadership Program.

Two weeks ago, the group began its trek across the United States, making its way to Washington, D.C., Philadelphia, New York City, Colorado Springs and Denver. The finale for the international trip is Louisville and Southern Indiana, with the group arriving here Tuesday.

“There is a common feature — the rainy day and hilly landscape,” Yulia Halkowskaya, dean of information and document communications department at Belarusian State University of Culture and Arts, said of her first impression of Southern Indiana.

Of course, the group wasn’t here solely for sightseeing. Instead, participants traveled to some of the most prominent libraries and museums each of the visited cities have to offer, where they learned about the role of libraries in American culture and how they operate.

Participants said they were surprised by the multitude of cultures within the United States. In addition to that and the differences in each region’s architecture, Ina Yuryk, director of scientific library at Belarusian National Technical University, said all of the libraries she has visited offered their own unique flair.

“We are very grateful to the organizers of this program for exposing us to such geographical and cultural diversity in this country,” Yuryk said. “At the same time, we have seen the best libraries in each of the regions that we’ve visited. They are different. Each of them is unique, therefore we value this experience. I’m sure we’ll put this experience in our toolbox.”

To kick off Wednesday’s itinerary, they headed to the Carnegie Center of Art and HIstory in downtown New Albany. There, director Eileen Yanoviak and Floyd County Library director Melissa Merida led a tour and discussion of the center’s offerings and processes.

“I think what it says about the Carnegie Center and the Floyd County Library is that we are really innovative enough to get the attention of a group of international librarians,” Yanoviak said. “Our program is unique and has a lot of merit, so people pay attention... My takeaway from their visit is just how great it is that librarians as a profession have international curiosity. We can learn from each other. Not just across state boundaries or city boundaries, but we have shared interest all across the world.”

Yanoviak highlighted some of the center’s specialties during the visit. Among them was its focus on education and outreach to local youth. Another highlight was the Underground Railroad exhibit, which tells the story of New Albany’s role in the 19th century pathway to freedom for African American slaves.

The museum’s association with the local library system was also stressed, with it being noted that such a partnership allows for stability in its offerings, unlike other independent, non-profit museums across the country.

“Our first visit today at Carnegie, we found out that we have a lot in common,” Yuryk said. “They, like us, are trying to promote literacy, arts and culture. In other words, one of the takeaways is this — all of the librarians in the world think alike. The main goal is to move forward and to not stop working through the challenges we face.”

Hanna Miadzvetskaya, head of the Mahilyow Branch of Republican Scientific and Technical Library, said she was impressed with how involved libraries are in their surrounding communities here, referring to them as the “foundations of the local community.”

She also noted how much effort is being put into adapting with the technological and social changes of the 21st century.

The big takeaway for Yanoviak was the commonalities shared by libraries and museums, even those separated by thousands of miles. Her goal is to show that libraries aren’t just about the books lining the shelves.

“It’s about community building, information sharing and alternative ways to thinking about what a collection can look like,” Yanoviak said. “It’s about telling the historical stories, not just having them as resources.”