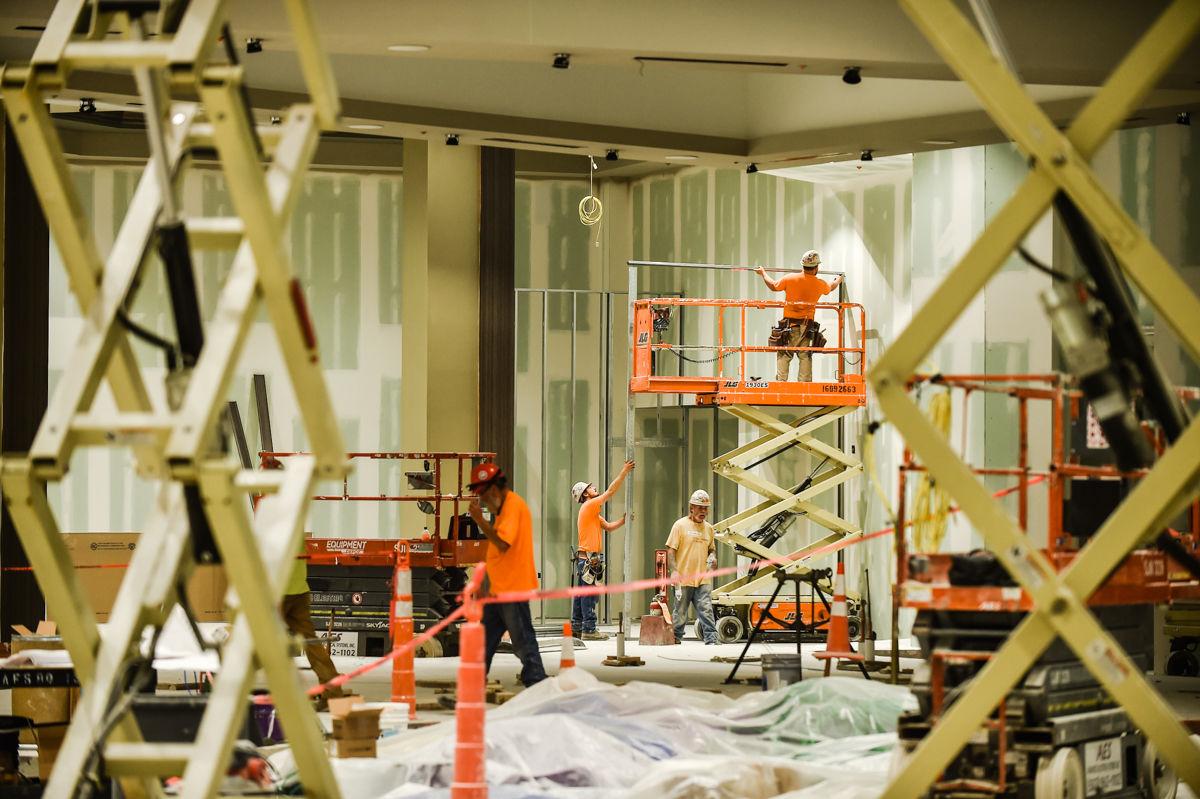 Crews erect the framing for a wall while working on The Book, a new sports gambling venue, which will occupy an area within the new casino floor. Legislation to allow sports gambling was recently passed and went into effect Sunday, Sept. 1. 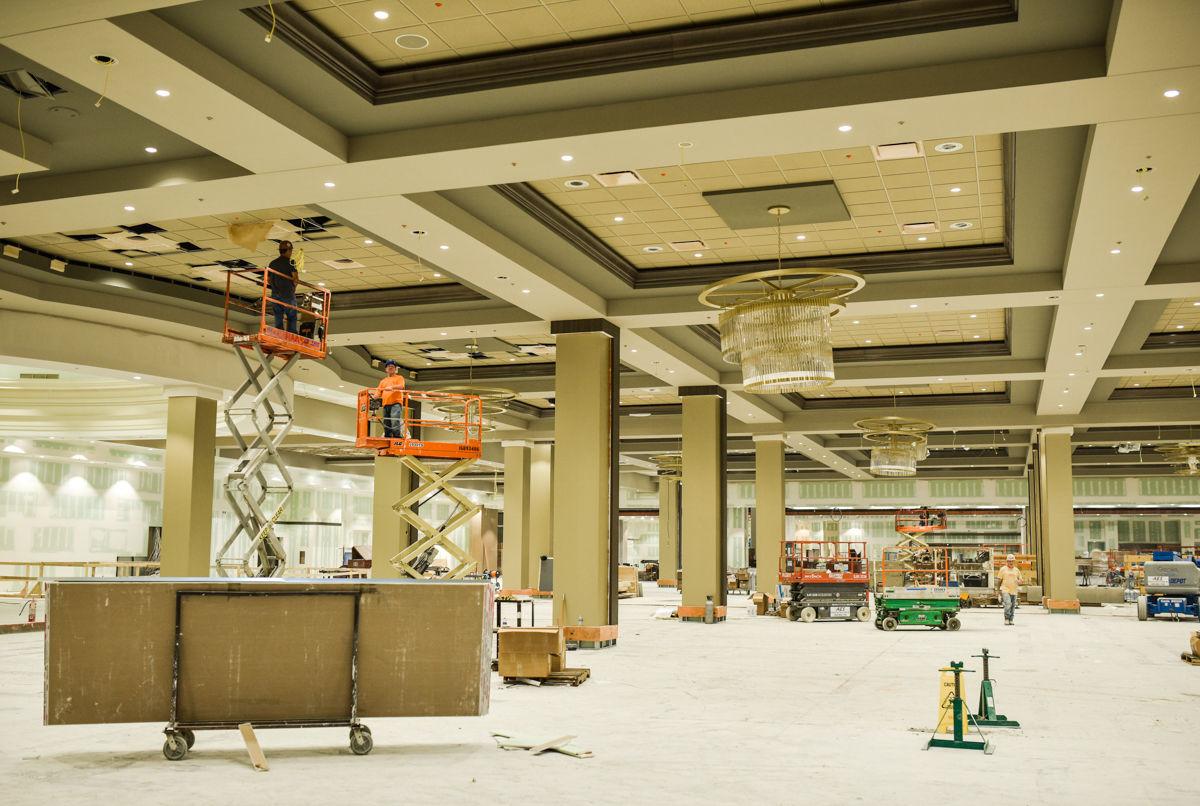 Work is on track at Horseshoe Southern Indiana to complete construction of the new land-based casino in December. Upon its completion, the casino will be renamed as Caesar's Southern Indiana. 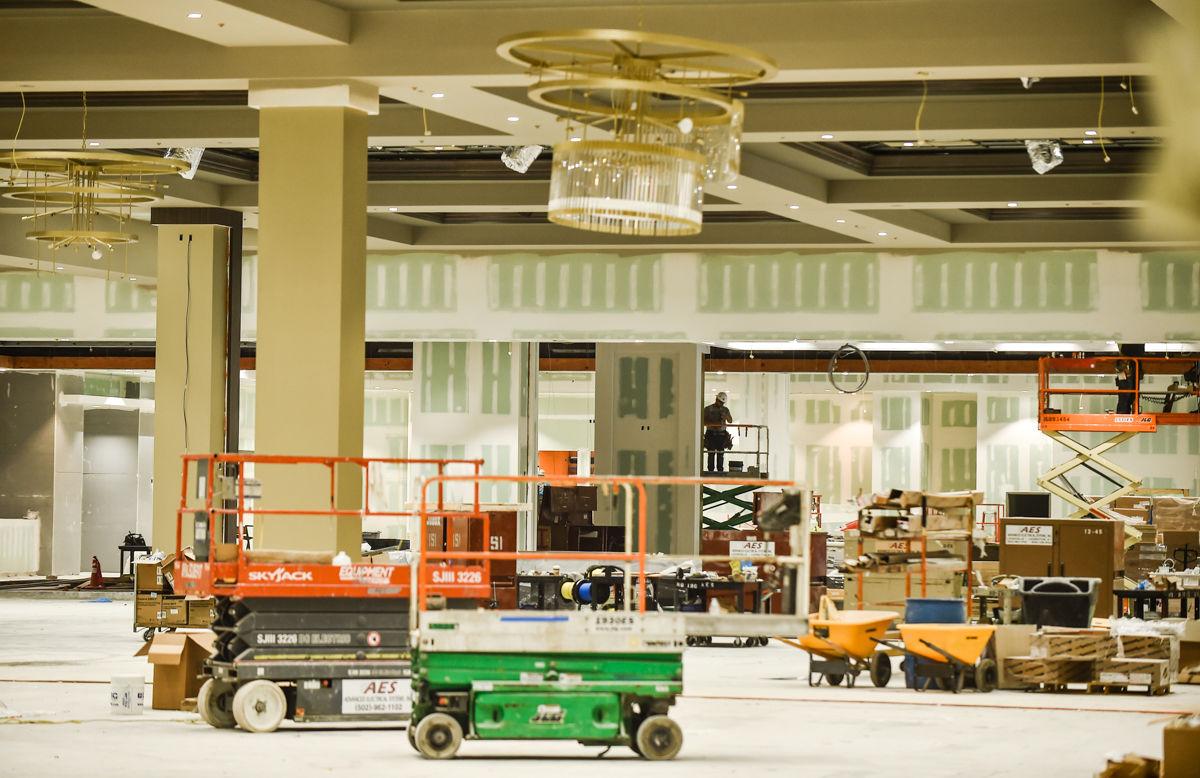 The nearly 100,000-sq. ft. casino floor will house all gambling games currently available on the boat, with the addition of a sports gambling venue. 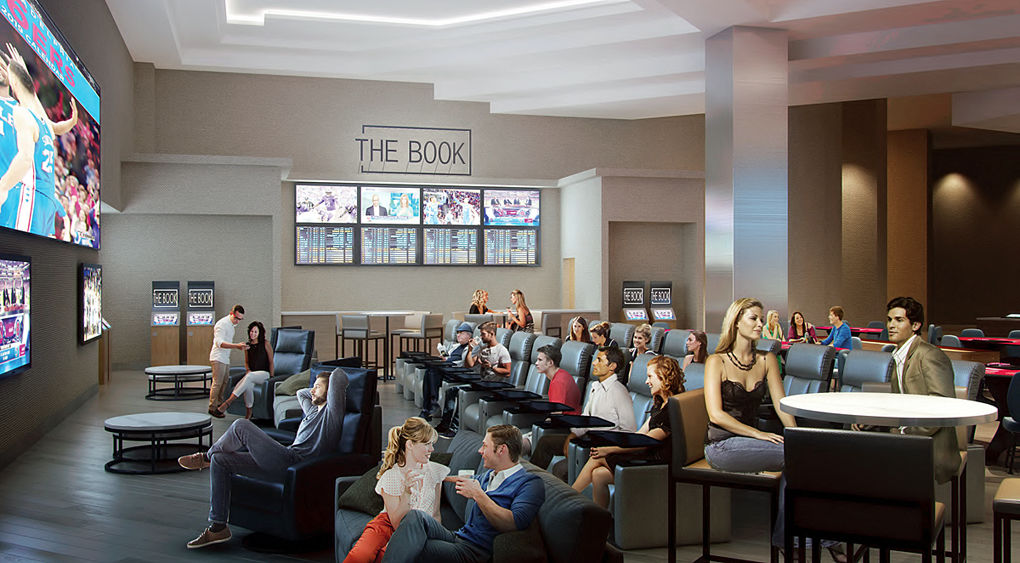 The Book sports gaming venue will open in the current Horseshoe Southern Indiana riverboat before moving to its permanent location in the land-based casino later this year.

Crews erect the framing for a wall while working on The Book, a new sports gambling venue, which will occupy an area within the new casino floor. Legislation to allow sports gambling was recently passed and went into effect Sunday, Sept. 1.

Work is on track at Horseshoe Southern Indiana to complete construction of the new land-based casino in December. Upon its completion, the casino will be renamed as Caesar's Southern Indiana.

The nearly 100,000-sq. ft. casino floor will house all gambling games currently available on the boat, with the addition of a sports gambling venue.

The Book sports gaming venue will open in the current Horseshoe Southern Indiana riverboat before moving to its permanent location in the land-based casino later this year.

SOUTHERN INDIANA — A form of betting typically reserved for the neon lights of Las Vegas will soon arrive in bucolic Southern Indiana.

Gaming officials predict sports gambling, which officially became legal in Indiana on Sept. 1, will be a game-changer for the likes of Horseshoe Southern Indiana Casino, which has big plans to accommodate the expected influx of visitors placing bets on sports.

In its more than two decades of existence, Horseshoe, which is undergoing a $90 million conversion to a land-based facility that is expected open as a rebranded Caesars Southern Indiana in December, has never seen anything quite like the sea-change represented with sports wagering.

"This is the first time in our 21 yeas that we've introduced a brand-new product. We've got your table games and slot machines, and poker on the gaming floor, and sports wagering is now something new," said Brad Seigel, senior vice president and general manager at the casino, as construction equipment at the new facility rumbled in the background. "Se we're really excited to bring that to our guests, and I think there's quite a bit of interest in it."

To capitalize on that interest, Horseshoe will open The Book at the riverboat casino Sept. 12, which will then transition to the land-based facility in December. That venue will boast a 100-foot-long, nearly 15-foot-tall wall of televisions (they can be synched to play just one game or show multiple games), five betting windows and five self-service wagering kiosks, with that number likely to grow. The Book will also feature dozens of chairs and tables "for people to hang out either to enjoy a game or enjoy their time at [the casino]," Seigel said.

The Book will be absorbed into 100,000 square feet of integrated space in the new land-based casino, where everything — gaming, food and bars — will be on the same level, rather than stacked on multiple floors like on the riverboat.

"Being on one level where you can see kind of from one end to the other and where you want to be and what you want to experience or game you want to play, just what's going on is going to be a completely reinvented experience," Siegel said. "I think our guests will really appreciate that."

The $90 million conversion will integrate gaming, the new sports book, and food and bars into one, 100,000-square foot space, rather than stacked on four levels like on the riverboat.

• Juno Bar will be located at the valet entrance

How sports betting might add to the roughly 1.5 million visitors that descend on Horseshoe each year remains to be seen, but Siegel wanted the bells and whistles in place to capitalize on the novelty of it all.

He considers The Book "a best in market sports book, between the viewing experience and the wagering experience combined with what we're going to offer in the new place with restaurants and bars, I think it will just be a place where people will want to be," he said. "I think this will be a place that people will want to watch a game or make a bet and just be in this environment."

Sports wagering in Indiana became a legal reality when Gov. Eric Holcomb signed Indiana’s sports gaming bill into law May 8. Indiana is the 12th state to legalize sports wagering. None of Indiana’s neighbors have launched sports betting, though Illinois has also legalized it, with a date of implementation yet to be determined. Other neighboring states have bills proposed.

When the Supreme Court decision allowing sports gaming to be legal nationwide was rendered in 2018, there was all manner of speculation on how widespread sports betting would become.

Some commercial entities wanted to explore the possibility of legal sports gambling on their properties. Some media and sports fans speculated that some entertainment and sports venues looking for a boost of interest and a revenue stream could have gambling on-site. And there was talk of gambling kiosks in public locations.

The Indiana law tapped the brakes on those grandiose schemes.

“The legislature authorized retail sports wagering to occur at the current Indiana-licensed casino facilities, racino properties (Hoosier Park and Indiana Grand) and the off-track betting facilities,” Indiana Gaming Commission Executive Director Sara Gonso Tait said. “We’re not in a position to approve any facilities beyond that.”

Gamblers must be 21 or older in order to place a bet. Indiana will allow the casinos to take wagers on dozens of professional, collegiate and international events, including football, basketball, baseball, auto racing, hockey, soccer, boxing, golf and Olympic competitions. No betting is allowed on high school or youth sporting events, or e-sports.

That's a lot of events — and a lot of potential visitors to Horseshoe Southern Indiana.

"It's a game-changer," Siegel said. "We're excited about it."

— CNHI reporter Todd Aaron Golden and The Associated Press contributed to this story.