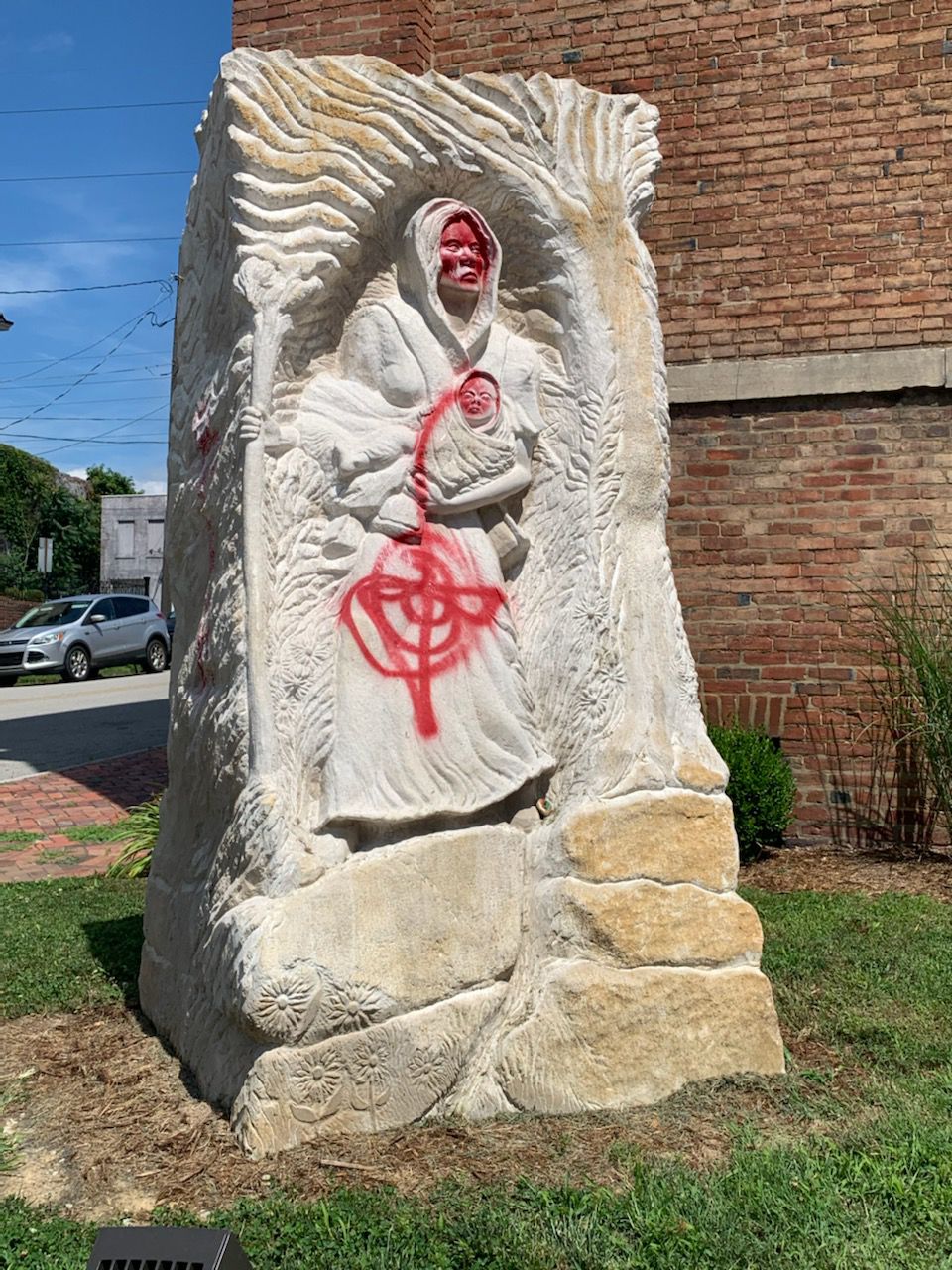 The statue of Lucy Higgs Nichols and her daughter, Mona, was vandalized early Friday morning. 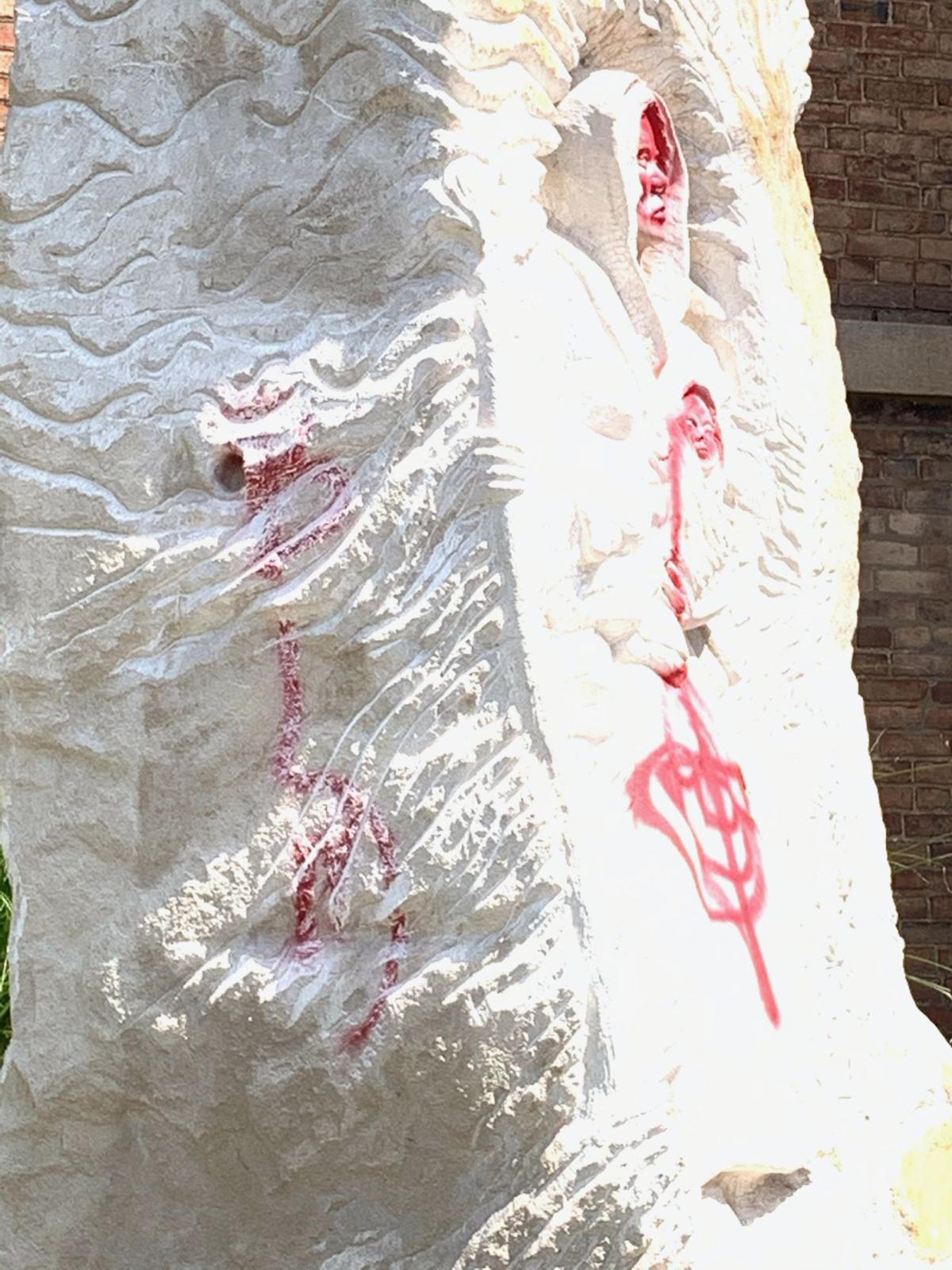 The side of the statue was also damaged. 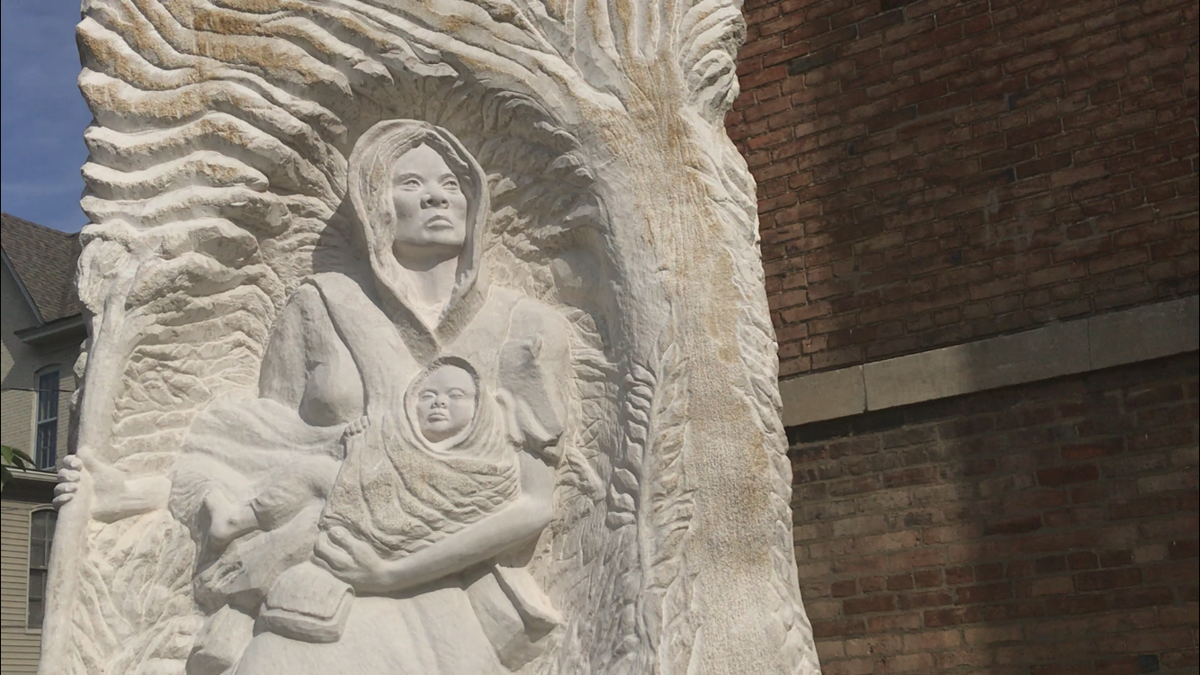 Lucy Higgs Nichols is depicted in this limestone sculpture fleeing slavery with her young daughter, Mona. The work, shown on the day it was installed, July 3, 2019, was commissioned by the Friends of the Town Clark Church and sculpted by New Albany artist David Ruckman. 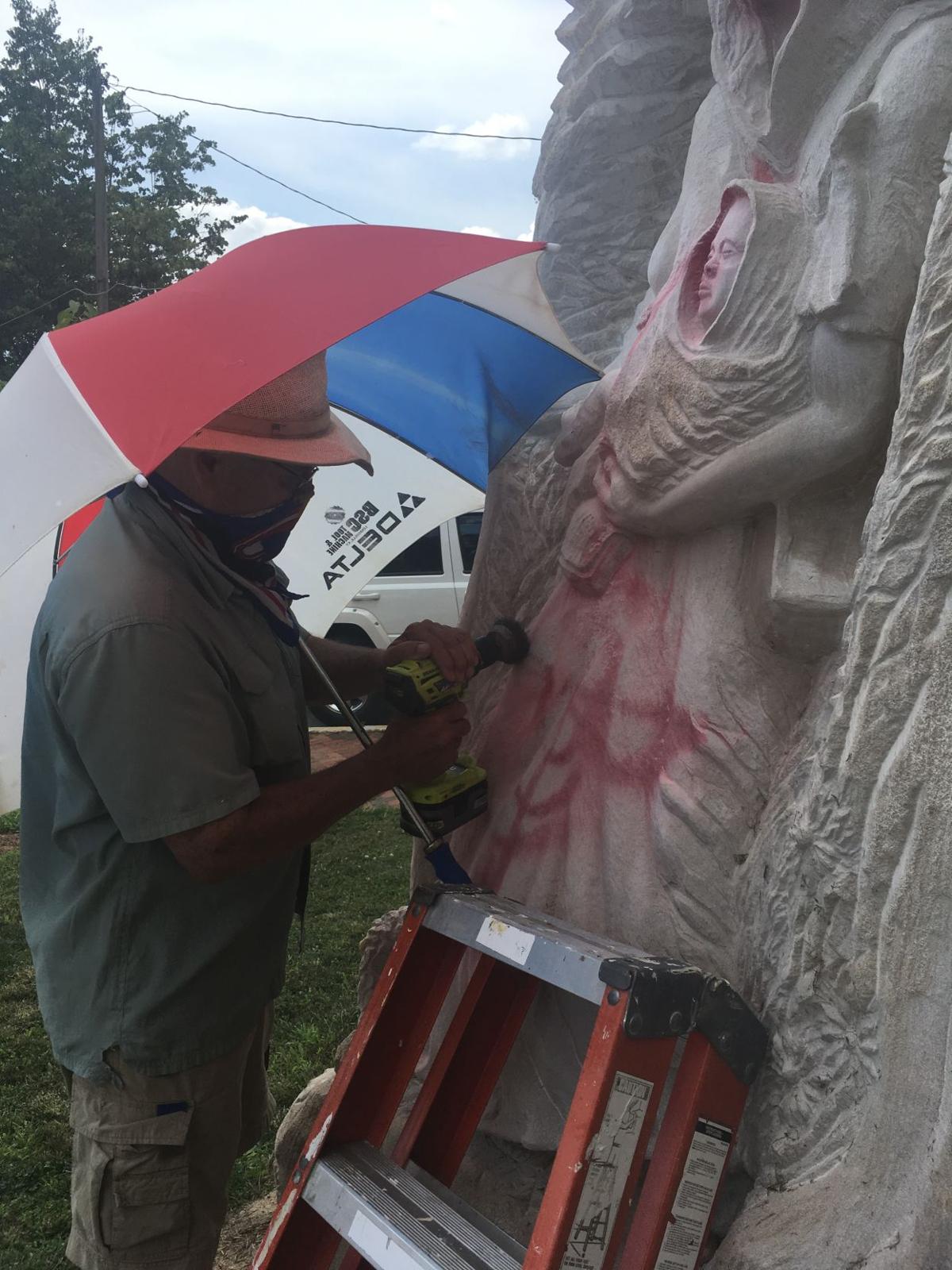 NEW ALBANY — A sculpture depicting Lucy Higgs Nichols fleeing slavery with her infant daughter was vandalized early Friday morning — a year to the day after the statue was dedicated on the grounds of the historic Second Baptist Church.

“I’m speechless,” said the Rev. LeRoy Marshall, pastor of the church, which is also referred to as the Town Clock Church.

Church staff discovered the vandalism Friday morning. Based on security footage, Marshall said the incident occurred at about 2:45 a.m. He said there appeared to be one person who was vandalizing the statue, and that person was on a bicycle.

According to New Albany Police Chief Todd Bailey, someone painted the faces on the statue red and painted “BLM” on it. He said the case is under investigation, and no arrests had been made as of Friday afternoon.

No other information about potential suspects was available.

Located at 300 E. Main St. in downtown New Albany, the church is noted for being a link in the Underground Railroad. A massive restoration project has been ongoing at the church, which included the addition of the sculpture of Nichols and her daughter, Mona.

In 1862, Nichols escaped slavery from a farm in Tennessee and later joined the Union 23rd Regiment of New Albany.

She worked as a nurse until the end of the Civil War and was named an honorary member of the Grand Army of the Republic.

Nichols was awarded a pension via a special act of Congress in 1898. She had initially been denied her pension, but Nichols and 55 veterans of the 23rd Regiment petitioned Congress for the payments.

Nichols remained in New Albany until her death in 1915.

The sculptor of the statue, David Ruckman, was already at the church at noon Friday inspecting the damage.

"Thanks to Mr. David Ruckman for the effort to repair this senseless vandalism," New Albany Mayor Jeff Gahan said.

Marshall said the hope is the statue can be repaired, though his frustration with what had occurred was palpable.

“This is totally unnecessary,” he said. “It’s something that’s going on everywhere and New Albany isn’t exempt. We have to be realistic.”

The incident marks the second recent case of a reported act of vandalism in New Albany related to a symbol of civil rights and equality.

A week ago on June 26, a Black Lives Matter flag and a Pride flag were stolen from a neighborhood park at the corner of East 11th Street and Spring Street. The American flag was also torn down and left on the ground.

Marshall was in the process of speaking with other religious leaders in New Albany on Friday to organize meetings in hopes of forming strategies and partnerships to deal with civil unrest.

He said it was ironic and sad that the statue was vandalized on a day when his mind was on partnering with others in the hopes of inspiring unity and peace.

“We don’t want this kind of thing to be commonplace here,” he said.