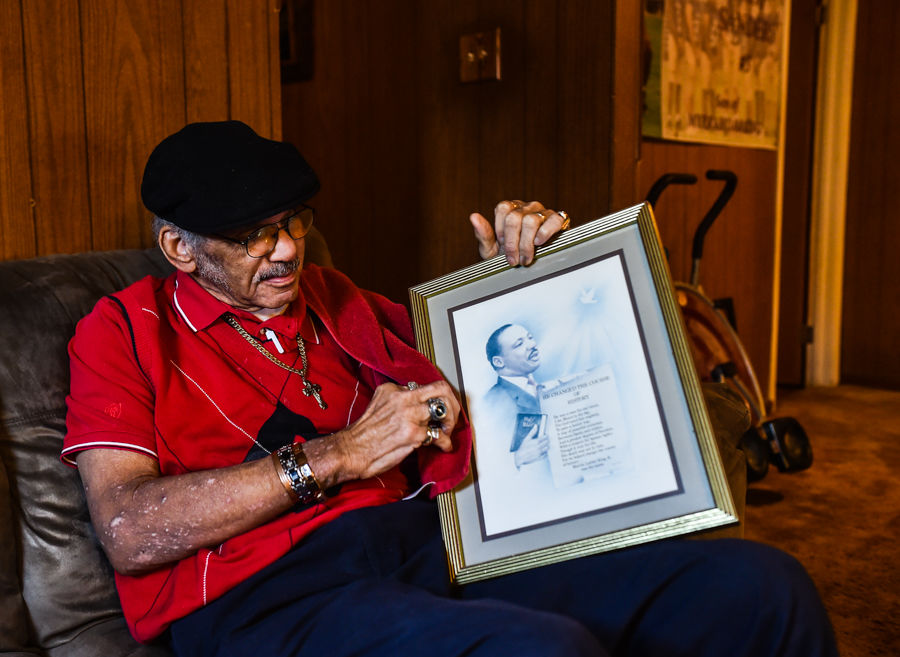 Marvin Allen Sr. gently wipes a smudge away from the glass holding a portrait and poem of Dr. Martin Luther King Jr. on the couch of his Jeffersonville home on Friday. Allen, 79, marched alongside MLK in Cicero, Ill., in the 1960s. 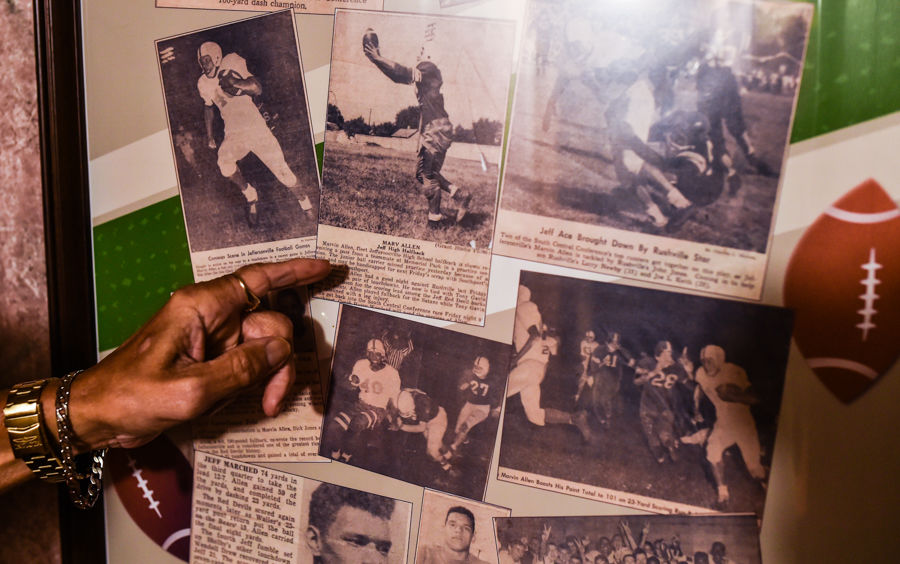 Marvin Allen Sr. recalls being in the spotlight for his football abilities, displayed in a collage on his hallway wall. 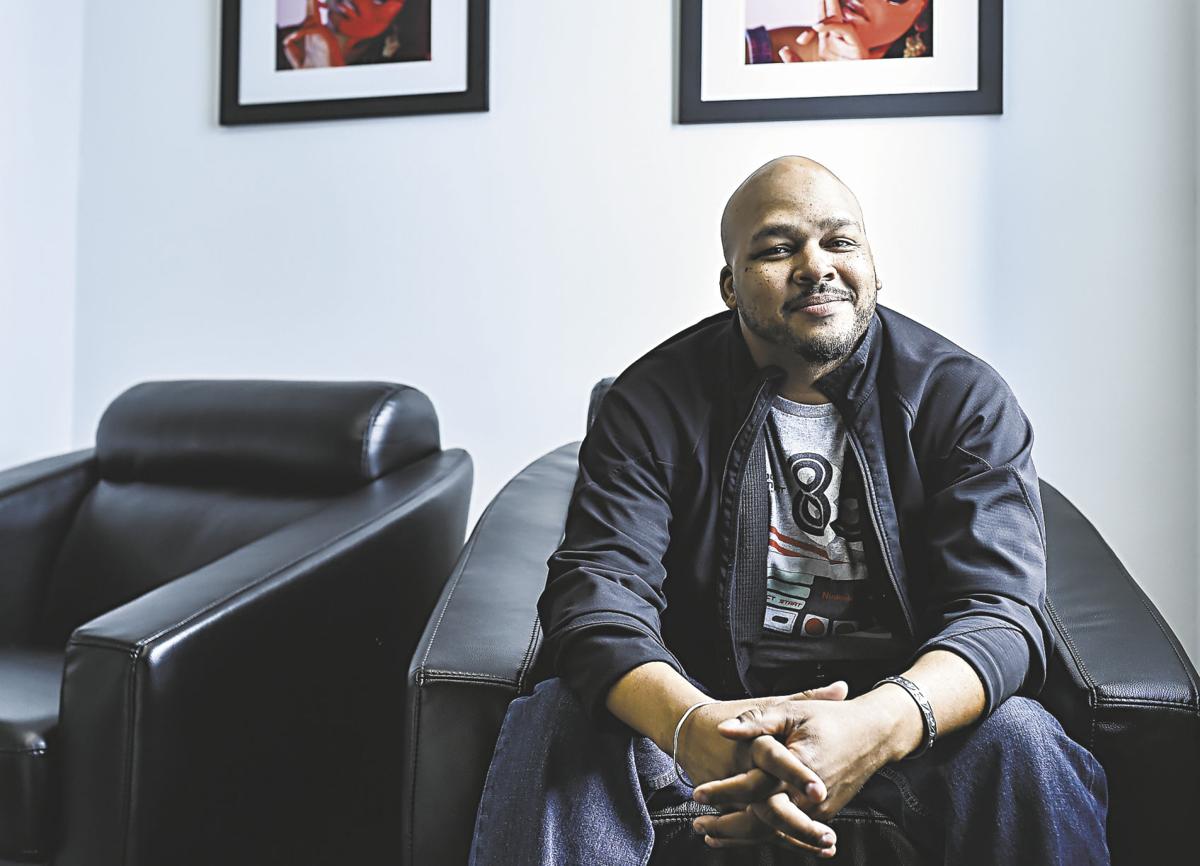 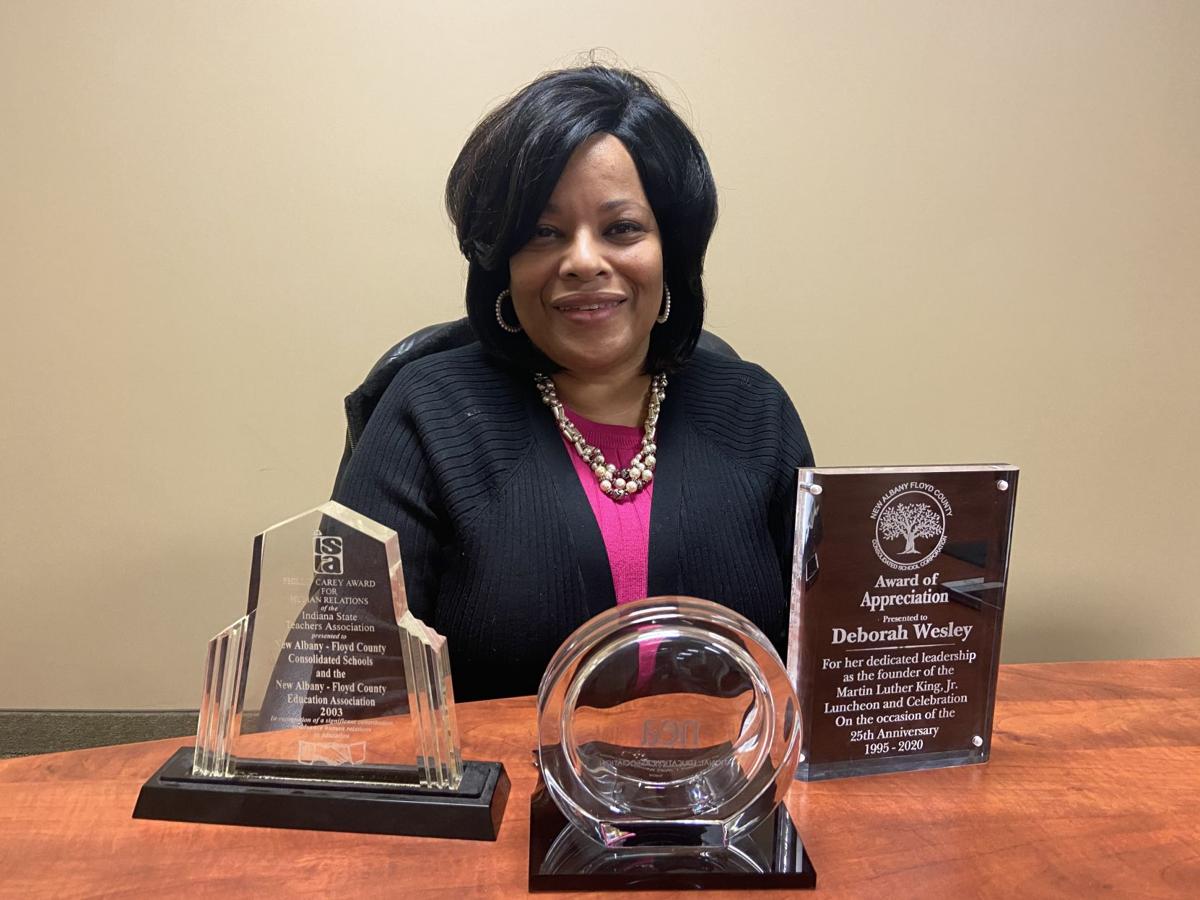 Marvin Allen Sr. gently wipes a smudge away from the glass holding a portrait and poem of Dr. Martin Luther King Jr. on the couch of his Jeffersonville home on Friday. Allen, 79, marched alongside MLK in Cicero, Ill., in the 1960s.

Marvin Allen Sr. recalls being in the spotlight for his football abilities, displayed in a collage on his hallway wall.

SOUTHERN INDIANA — Throughout the years, Jeffersonville resident Marvin Allen, 79, has worked to live by the legacy of Martin Luther King, Jr.

Allen, who was one of the first African American members of the Jeffersonville City Council, experienced the fight for racial equality during the civil rights movement of the 1960s — as a college student, he actually marched with King in Chicago.

In recognition of Martin Luther King, Jr. Day, the News and Tribune reached out to local residents to learn about their experiences as people of color in Southern Indiana. Through these conversations, they shared various obstacles they have faced due to issues such as discrimination and racial disparities, as well as ways they would like to create a more inclusive and equal community for all.

Allen, who grew up in the Claysburg neighborhood of Jeffersonville, was a football player at Indiana University in the 1960s. He was among a group of athletes who traveled up to Chicago for a rally led by King to address issues such as housing discrimination. First, the group visited Cicero, Ill., a suburb of Chicago, and as they visited a restaurant after dark, they faced a violent altercation as the owners refused to serve the group because of their race — they started pushing and shoving in an attempt to remove the group from the restaurant, he said.

The group then boarded a bus to Chicago for the rally, and although they were late, they were asked by King to come to the front of the line.

"[King] said, 'we heard there was a little ruckus over in Cicero,'" Allen said. "He said we must remain nonviolent. And then he looked right dead at us. We said OK, and we put our heads down."

They later joined the civil rights leader for the march through Cicero, where they were met with violence by a mob of white people with chains and dogs. The football players gathered around King to protect him from the mob, causing Allen to suffer from a back injury, and they would later be arrested and jailed, along with King.

"After about a half mile, we just formed, as you do in football, a huddle around [King]," Allen said. "And we actually took the beatings and the dog bites, but mostly the beatings from the chains... He said if it hadn’t been for the football players, they would have killed him, and the dogs would have gotten to him."

His experience marching with King in Chicago was among the factors that inspired him to become involved in politics in Southern Indiana, where he aimed to create positive change for people of all races. He was elected as a councilman in 1979, and he served a total of three four-year terms.

As one of the first African American city council members in Jeffersonville, it was difficult to gain respect at first, but as time went on, it became easier, he said, and he was able to accomplish a variety of goals within the city. He was involved in the addition of Claysburg Tower to provide low-income housing in Jeffersonville, as well as a number of other projects in the Claysburg area.

Allen has seen plenty of progress in terms of racial equality and representation in leadership over the years, but he acknowledges that there is still much more to be done, and he would like to see more investment in the area to help minority communities, including better housing and more businesses in the Claysburg area.

He was inspired to hear King's vision of equality and the civil rights leader's inner strength has remained an inspiration to Allen over the decades.

"[King] believed that all people should be given an opportunity to perform to the maximum, no matter what color you are, white folks along with black folks," Allen said. "You couldn’t scare him off, because he had this inner strength that was God-given. That’s what he projected onto other people, onto us. He passed it down to us."

A NEED FOR CHANGE

Jeffersonville couple Miguel Hampton and Teah Williams-Hampton emphasize that the area has yet to attain economic inclusivity, and they have both personally faced instances of both overt and implicit discrimination.

Hampton, who is Afro-Latino, didn't grow up in Southern Indiana but has lived in the area for about 15 years, and Williams-Hampton, who is African American, grew up in the Claysburg area of Jeffersonville. Hampton is an entrepreneur who launched F5 Enterprises, LLC, a local marketing agency, and Ink Spot Creative Cafe in New Albany. Williams-Hampton is a licensed social worker involved in various boards and organizations within the community, including the Clark County NAACP.

Hampton said while many in Southern Indiana are socially inclusive of racial and ethnic minorities, there is still a long way to go to achieve equality, including more representation in leadership positions, whether in government, schools or committees/boards within the community.

There is a need for more support of black and Latino-owned businesses in the area, he said, and in Jeffersonville and New Albany, he isn't seeing sufficient efforts by municipalities to reach out to minority communities. As a business owner and entrepreneur, he sees this on an individual level, he said, and at F5 Enterprises, most of his business comes from outside of Southern Indiana.

As a business owner and entrepreneur, Hampton has faced prejudice from clients, including a white client who told him, "I'd really like to keep working with you, but times are bad and I really need to do business with someone who looks like me."

Hampton and Williams-Hampton, along with their 16-year-old daughter, have been called racial slurs before, while other instances of bias have been more subtle or implicit. For example, he said he has received calls "from white people asking me to do stuff for free that they’ll pay other people to do."

"In the 12 years of doing business in Southern Indiana, I can tell you that absolutely yes, I’ve seen racism," Hampton said. "I’ve been called [the N-word.] I had a client once talk about how he was going to paint a Klan mural inside of his ice cream shop to pay homage to Southern Indiana and its historical roots. So yes, I’ve witnessed it, I’ve seen it firsthand. We have a long way to go, but these are things that publicly, our community is not willing to talk about, specifically within leadership."

Williams-Hampton said it is necessary for community members to have "not-feel-good conversations" to address issues of racism and inequality.

"It doesn’t feel good, and it’s not necessarily with the intention of trying to shame people or make them feel bad, but sometimes when you are aware of pain and crap, it just doesn’t feel good," she said. "And so, OK, when you don’t feel good, you do something to help yourself, hopefully in a healthy way, not just trying to cope with it or cover it up. Try to heal from it and learn from each other."

When Jeffersonville resident Deborah Wesley was growing up in New Albany, she didn't have teachers that looked like her, and she didn't see many people of color in professional roles.

But several decades ago, she became the first African American to work in New Albany-Floyd County Consolidated School Corporation's central administration, and her role was to create a more inclusive environment within the school district.

"I had to seek God to be a change agent for the school community and community at large," she said. "[I worked to] infuse diversity into the curriculum. When I grew up, there were no textbooks that really were diverse. There were not children of color in the textbooks I read. But now you can go to schools and they have all ethnic groups."

Wesley was hired in 1994 as the district's facilitator for multicultural and special projects. The job title eventually became known as director of equity and diversity, and she remained in the position until 2010. Throughout her years at the school district, she developed multicultural curriculum, diversity training, minority hiring practices and the district's Multicultural Plan.

"It was absolutely challenging being the first director of equity and diversity, because of being a change agent," she said. "Everybody, one, don't understand change, and two, some people don't want anything to change."

On Wednesday, she was honored with the Martin Luther King Award of Appreciation during the school district's annual Martin Luther King Commemorative Dinner, an event that she started. She is proud of the progress that has occurred within the school system over the years, but she still sees a need for more diversity in leadership positions in the community, including schools.

"I think [minorities] can be invited to be more involved in the community, to be invited to sit on boards and committees," she said. "If you want change, if you want to implement change, you have to have diversity at every table. Other than that, everyone thinks the same."