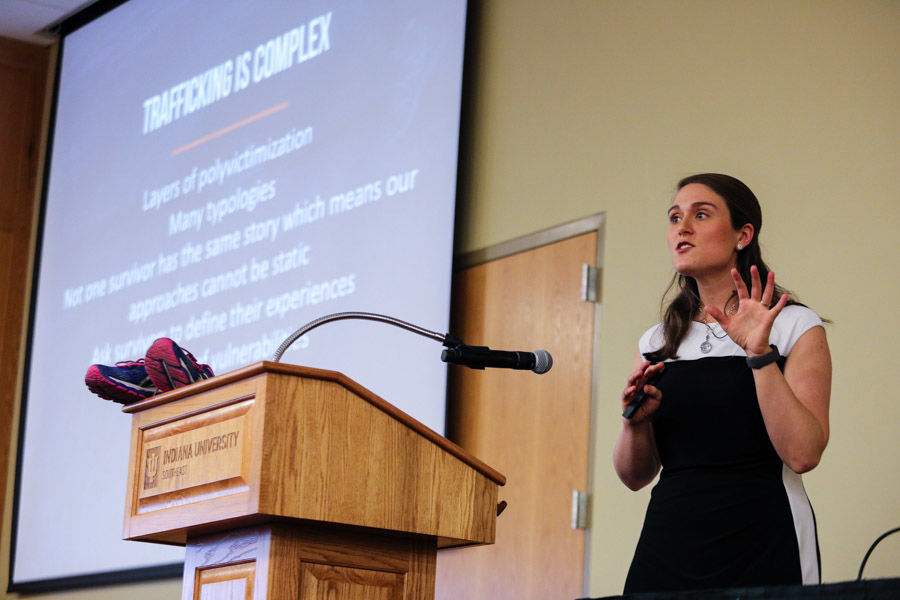 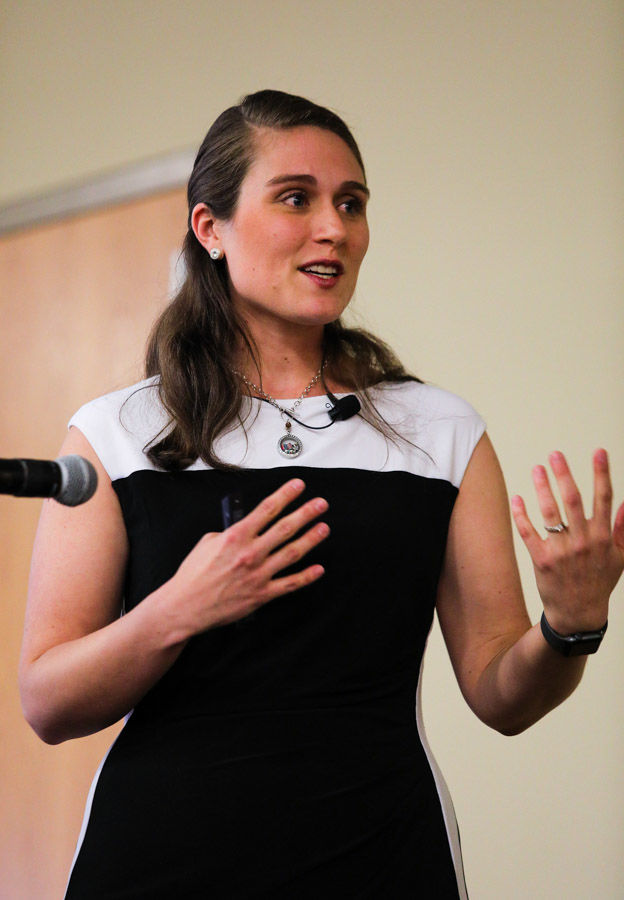 Jessa Dillow Crisp is a survivor of sexual abuse and human trafficking. She is the co-founder and executive director of the nonprofit BridgeHope, organization that utilizes technology to connect survivors of human trafficking with their own local resources, in Colorado. 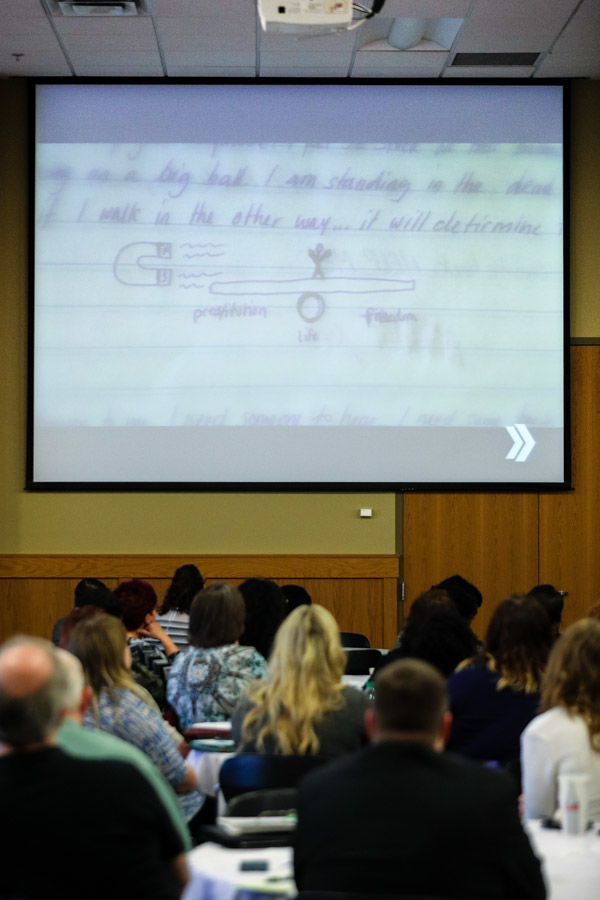 A drawing made by Jessa Dillow Crisp is displayed at the Third Annual Southern Indiana Human Trafficking Awareness Conference on Tuesday. The drawing illustrates Dillow Crisp's struggle with feeling the need to return to a life of prostitution, opposed to finding freedom.

Jessa Dillow Crisp is a survivor of sexual abuse and human trafficking. She is the co-founder and executive director of the nonprofit BridgeHope, organization that utilizes technology to connect survivors of human trafficking with their own local resources, in Colorado.

A drawing made by Jessa Dillow Crisp is displayed at the Third Annual Southern Indiana Human Trafficking Awareness Conference on Tuesday. The drawing illustrates Dillow Crisp's struggle with feeling the need to return to a life of prostitution, opposed to finding freedom.

NEW ALBANY — Jessa Dillow Crisp has spent the better part of the last decade learning who she is, working on her path of recovery from the things that were taken from her as a child victim of human trafficking. Now, she works to help others who are or have been in the same situation.

She is co-founder and executive director of Bridgehope, a non-profit organization based in Colorado that aims to connect victims and survivors of abuse with resources.

As a keynote speaker Tuesday at the third annual Southern Indiana Human Trafficking Awareness Conference, held at Indiana University Southeast, Crisp told her story to the hundreds in attendance — community members, and those who work or may come in contact with victims.

As a child, in her native country of Canada, Crisp was abused and sold into the sexual human trafficking sector by her family. At first, it was in her area. But she would eventually be sold to a circuit operating in the United States. As a teenager, she was sold in the Indianapolis area for six months.

“One of the names for human trafficking here in the U.S. is called 'the game,'” Crisp said. “And I can tell you that during the 2010 Winter Olympics, it was not a game for me but rather sadistic pain and horrific evil.”

Clarksville Police Chief Mark Palmer said that he sees more sex trafficking in the way of consensual sex workers, not forced abusers. While it is not large-scale in the town, it does come in waves, such as during large events like Thunder Over Louisville or the Kentucky Derby.

While Clarksville police have not dealt directly with an underage trafficking case, Palmer said police are trained on signs to look for with potential victims.

“Anything that appears unusual,” he said. “People that look like they're being forced, that somebody is ordering them to do something, that somebody has their hands on them at all times.

“You have to look for this kind of thing to stand out. It can be different in all situations [and] it takes somebody who's a little more observant to say 'this just doesn't fit.'”

In addition to the sexual abuse Crisp endured, her identity was also stripped away by her abusers, who controlled where she went, what she ate, how she sat, how she talked.

At one point while she was in Kansas City, she met a woman who was in the mental health field. That woman recognized the signs that Crisp could be a victim — no eye contact, a disassociation in communicating. She gave her a small piece of paper with her contact information on it.

Once back in Canada, Crisp got the courage to call the woman.

“She said 'Jessa, do you know you have so much potential'?” Crisp recalled. “'Did you know that at the age of 21, that you could make a choice?'”

Crisp hadn't. Her life had been oppressive and abusive. But little by little, she heard the women's words.

“I called her again and again,” Crisp said.

Through the calls, the woman helped Crisp put together an escape plan and she would eventually move to the U.S.

“I experienced things for the first time,” she said. “Things that were new, things that I never knew were possible.”

Maggie Kochert, assessor at the Floyd County Department of Child Services, said there has been a rise in youth that officials believe may be victims of human trafficking.

Some of the signs are behavioral, like having a stronger than usual attachment to their phone, the connection to their abuser who they, as victims, are conditioned to want to protect. Other things could be styles of dress that are way beyond their years.

If they suspect something is going on, they report it and arrange for a forensic interview.

“Unfortunately, a lot of these kids aren't ready to talk yet,” Kochert said.

When Crisp's visa expired and she went back to Canada, she was recruited back into the damaging circuit by a woman who sensed her vulnerabilities.

“I did not go back to the life by choice,” she said. She explained to those in the audience that those working with victims have to recognize that relapse is a real possibility, and they should prepare for it.

“Expect the best, plan for the worst,” she said. “Do not give up on people who relapse.”

She talked about resilience in the face of the abuse she and so many others have endured. Healing doesn't mean you return to the person you were before, she said. Resilience doesn't look like puzzle pieces coming together neatly.

“Resilience looks like a stained glass window,” she said. “The picture looks different [but] lights shine through the broken places.”

When she found the courage to escape again, she got involved with a group of mentors who helped guide her on the precarious first steps of recovery. In 2012, around two years into her own healing, one of her mentors offered her an opportunity: pay for her expenses to run in the Tinkerbell half-marathon at Disneyland.

“That moment changed my life forever,” she said. “Not only had I never been to California before, but I was going to Disneyland.”

She discovered a love of running and as a way to help her push through some of the feelings about what has happened in her life. It also helped her identify with herself, and connect with her body and health.

“I learned that I hold so much power to change my present experience and my future,” she said. She also learned how to express herself through art and In 2013, after guidance from the mentors, she re-entered school, earning her GED in 2013.

“They said 'Jessa, if you can read, you can learn anything,'” she said. “It's absolutely incredible to me how education can change a person's life.”

And for the past six years, she's worked to share her story and use her knowledge to help others. She's still growing, still learning, still healing. But it's something that feels right for her to do.

“It was important to me because I wanted to make a difference,” said. “I wanted to be able to give one person hope.”