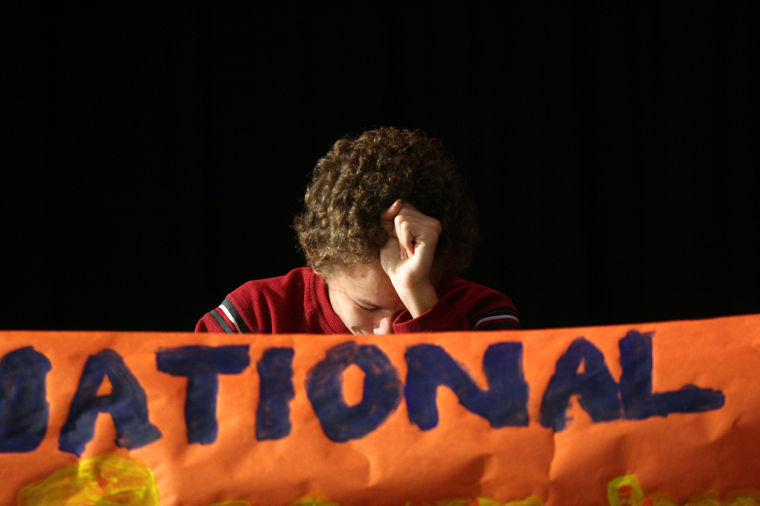 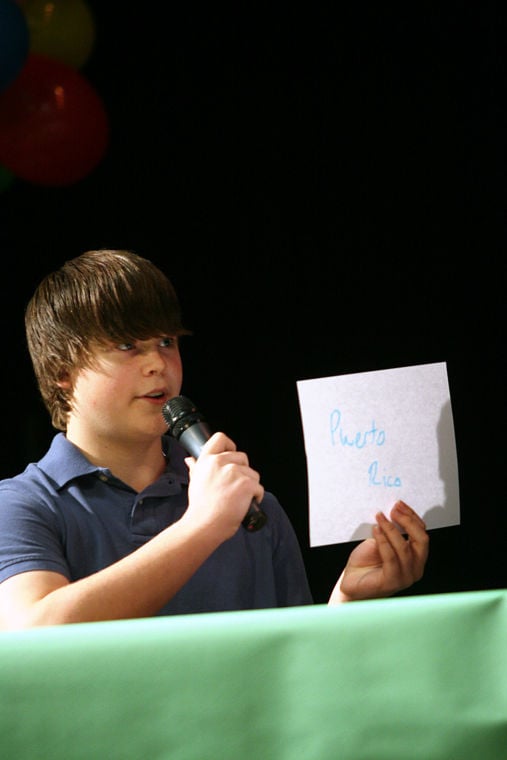 Eigth-grader Ben Scroggins holds up his answer in the championship round of the National Geographic Bee. Scroggins won the event and is eligible for the state competition. Staff photo by C.E. Branham 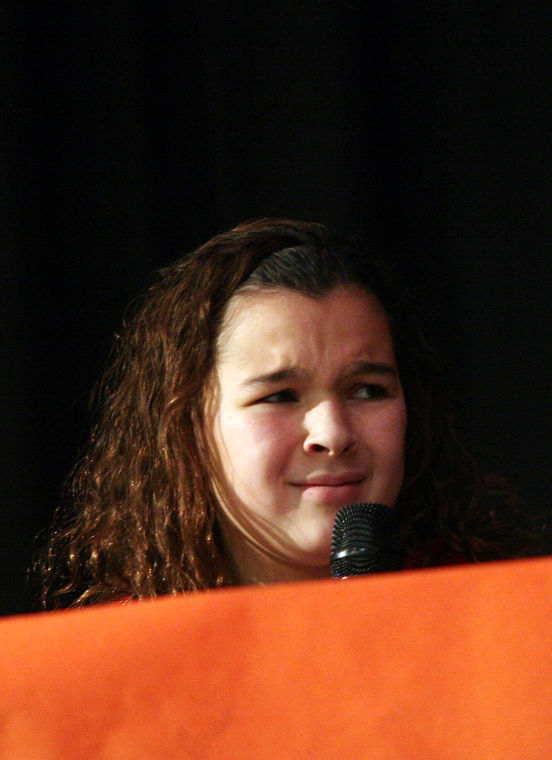 Eigth-grader Ben Scroggins holds up his answer in the championship round of the National Geographic Bee. Scroggins won the event and is eligible for the state competition. Staff photo by C.E. Branham

Nineteen students sat on stage at River Valley Middle School in Jeffersonville, nervously awaiting the start of the seventh and final round of the preliminary competition of the National Geographic Bee. After this Thursday-morning round, 13 students would be cut. The emcee of the event, seventh-grade social studies teacher Scott Rolfs, asked the group, “Is everyone ready?” “No,” many contestants whispered. The audience laughed and the questions started again. The stakes were high — the kids were competing for up to $25,000 in scholarship money and a trip to Washington, D.C. But first, they had to win at the school level. With friends and family members watching in the audience, the students showed off what they had learned. They had spent eight weeks preparing as part of a school club. Each contestant scored in the top of his or her team to get to this point. After seven rounds of questions, the playing field was narrowed to the top six, which included sixth-grader Sean Durbin, seventh-grader Taylor Broadway-Richardson, and eighth-graders Riker Hill, Jennifer Magana, Arielle McGannon and Ben Scroggins. Then, students were cut once they missed two questions to get down to the final two contestants — Scroggins and Hill. Hill, 13, who has competed in the bee for three years, won last year and was chosen to go on to state competition. He had hoped for a repeat performance this year, but ended up finishing second. “Almost first! So close. So very close,” Hill said. “I was a little let down, but you have to go with what life gives you.” Scroggins, 13, also competed last year, but did not get past the first round. He said he was not expecting to win and did not prepare, other than looking at maps. The map-checking helped, as Scroggins answered two out of three questions in the championship round — nailing queries about the Vatican and Asian geography — to take the contest. Hill managed one out of three in the last question group. Ben’s mom, Cindy Scroggins, said it is his hobbies that helped him take first place. “He likes all the nonfiction type of stuff,” she said. “He doesn’t really ever study-study.” In the next few days, the winner will take a qualifying exam. The top 100 students — ranging from fourth to eighth grade — in Indiana will go on to compete at the state level. The 10 winners there will go on to the televised national competition in Washington, D.C., that is hosted by Alex Trebek. The program started in 1990, but this is only the fifth year for River Valley to participate. Rolfs used to work in Colorado. There, the school had participated since 1991. So, when Rolfs came to Jeffersonville six years ago, he was determined to start the contest locally. “I’ve noticed that it’s gotten a lot more competitive over the years,” Rolfs said. “This year, we really had a great bunch of kids. They worked hard and we had a lot of fun.” He said he plans to hear back in late February or early March on whether or not Scroggins makes it to the state level. The state competition is April 4 and the National Geographic Bee is May 20-21. Where’s your head at? Here are some questions and answers from last year’s National Geographic Bee. Answers appear at the bottom of the quiz. 1. The Guadalquivir River flows through Andalusia, a farming region in what country? 2. Tea is the principal cash crop in the state of Assam, which is located north of Bangladesh in which country? 3. Which country does not border India — Thailand, Nepal or China? 4. Zambia’s most populous city is located at the crossroads of the Great North Road to Tanzania and the Great East Road to Malawi. Name this city. 5. Saginaw Bay, an inlet of Lake Huron, lies off the coast of which state — Michigan or Idaho? 6. The Himalaya are located partly in which country — Nepal or Turkey? 7. A causeway connects Saudi Arabia and what country? 8. Gaborone is the capital of a country in southern Africa where diamonds account for most of the total export earnings. Name this country. 9. Hindi is one of the many languages spoken in the country that has the world’s second largest population. Name this country. 10. What city is the political and cultural center of France? 11. Which county has a larger number of Spanish speakers — Uruguay or Malaysia? 12. Germany’s invasion of what European country marked the beginning of World War II? 13. Which city is west of the Mississippi River — Chicago or Denver? 14. In October 2004, a series of powerful earthquakes hit the city of Ojiya, located on the same island as Mount Fuji in what country? 15. Hinduism and Buddhism are two of the major religions that have their origins on which continent? 16. Fort McHenry, site of the British attack that inspired Francis Scott Key to write “The Star-Spangled Banner,” is in the harbor of what city in Maryland — Annapolis, Baltimore or Dover 17. The balboa is the official currency of the country that occupies the land the explorer Balboa crossed to reach the Pacific Ocean in 1513. Name this country — Brazil, Nicaragua or Panama 18. Saguaro, prickly pear, and cholla are varieties of a kind of plant most commonly associated with what kind of climate — arid, Mediterranean or tundra Answers: 1. Spain; 2. India; 3. Thailand; 4. Lusaka; 5. Michigan; 6. Nepal; 7. Bahrain; 8. Botswana; 9. India; 10. Paris; 11. Uruguay; 12. Poland; 13. Denver; 14. Japan; 15. Asia; 16. Baltimore; 17. Panama; 18. arid — www.nationalgeographic.com/geobee/index.htm