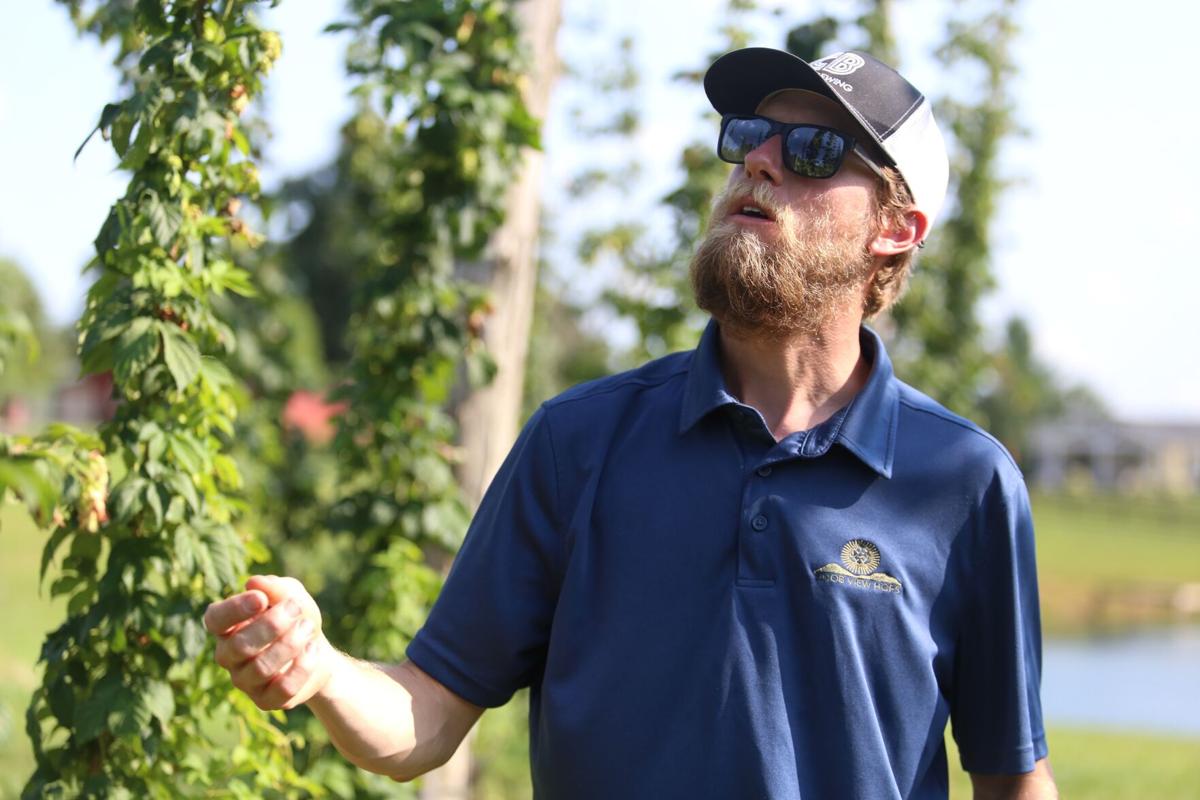 Tim Byrne of Knob View Hops inspects the hop plants growing at his Floyds Knobs farm. The hops are featured in local beers such as brews from Our Lady of Perpetual Hops. 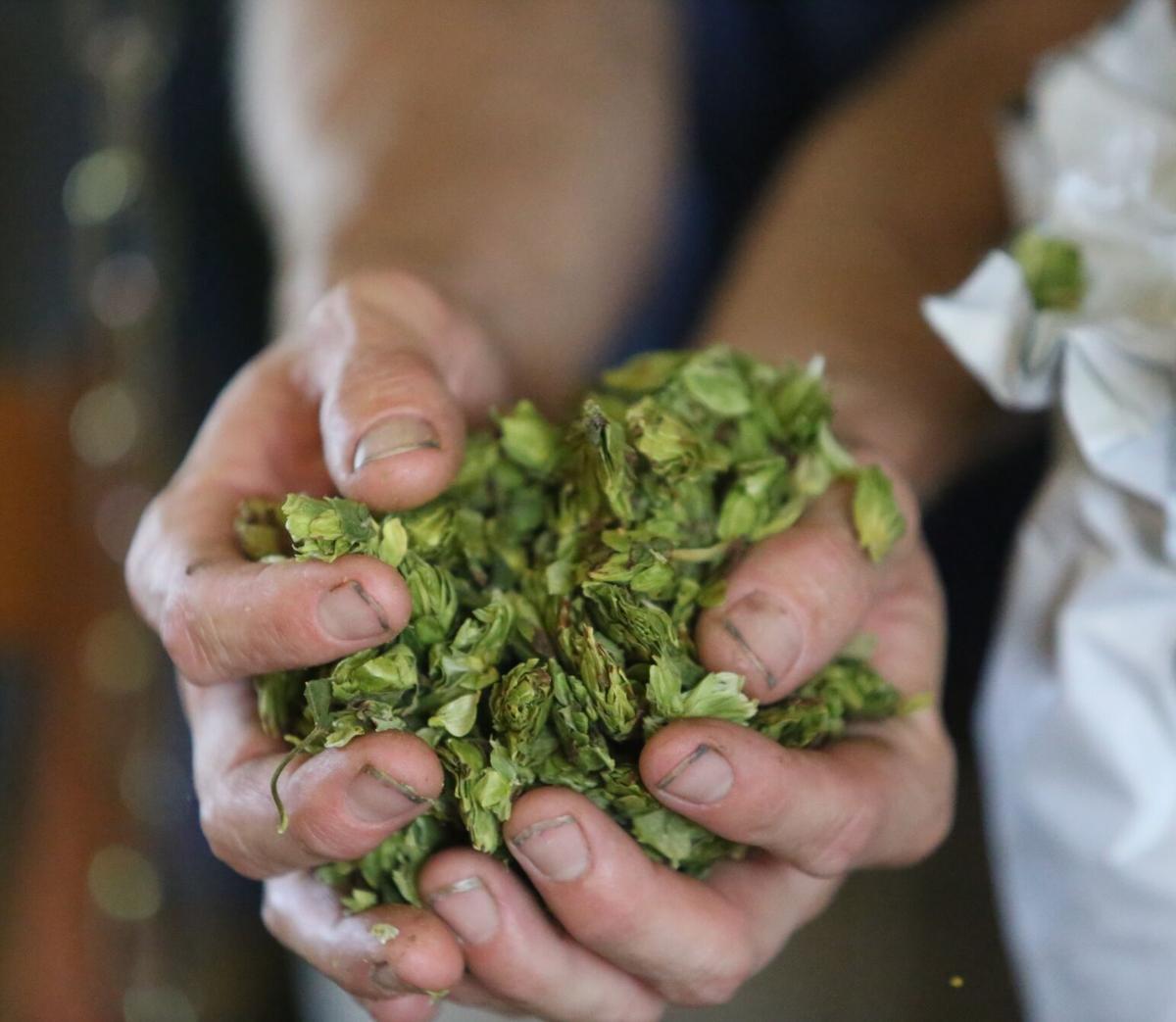 Farmer Tim Byrne holds a handful of dried hops that were grown at the Floyds Knobs farm he runs with his cousin, Kory Byrne. 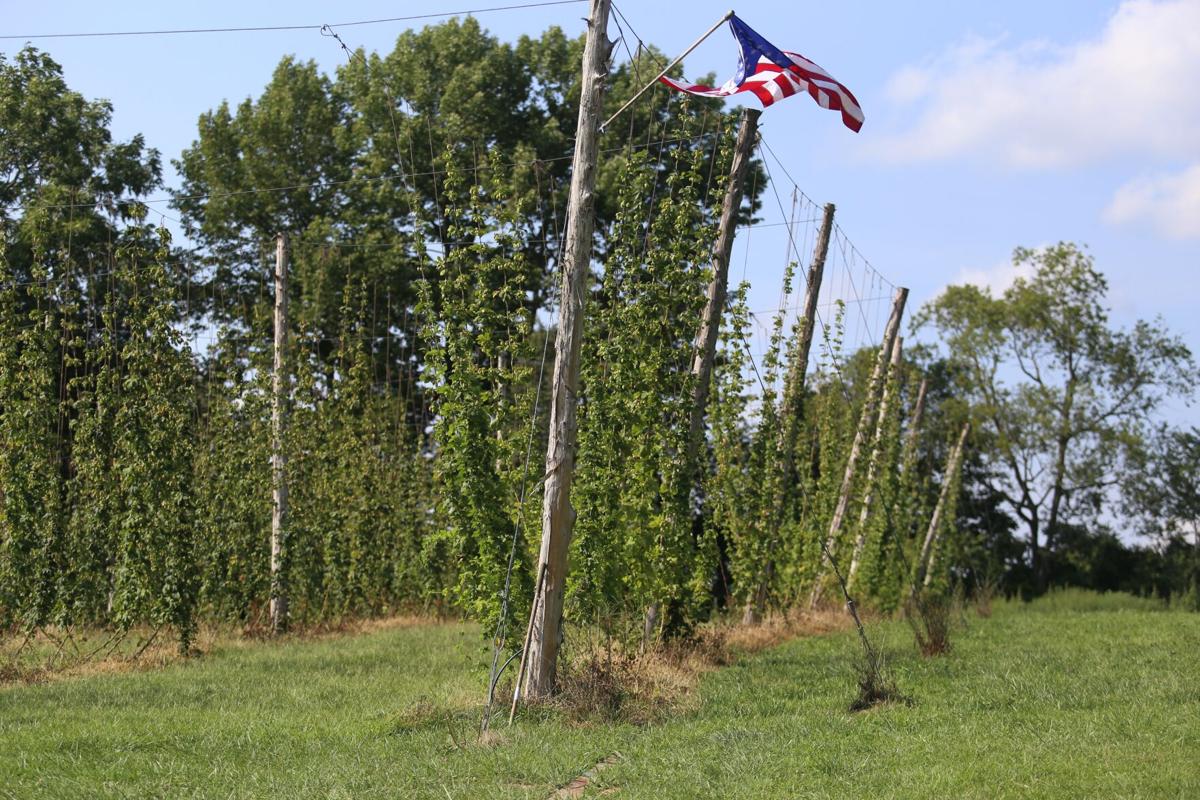 The hop plants at Knob View Hops in Floyds Knobs will soon be harvested. They will later be dried and packaged to be used in craft beer. 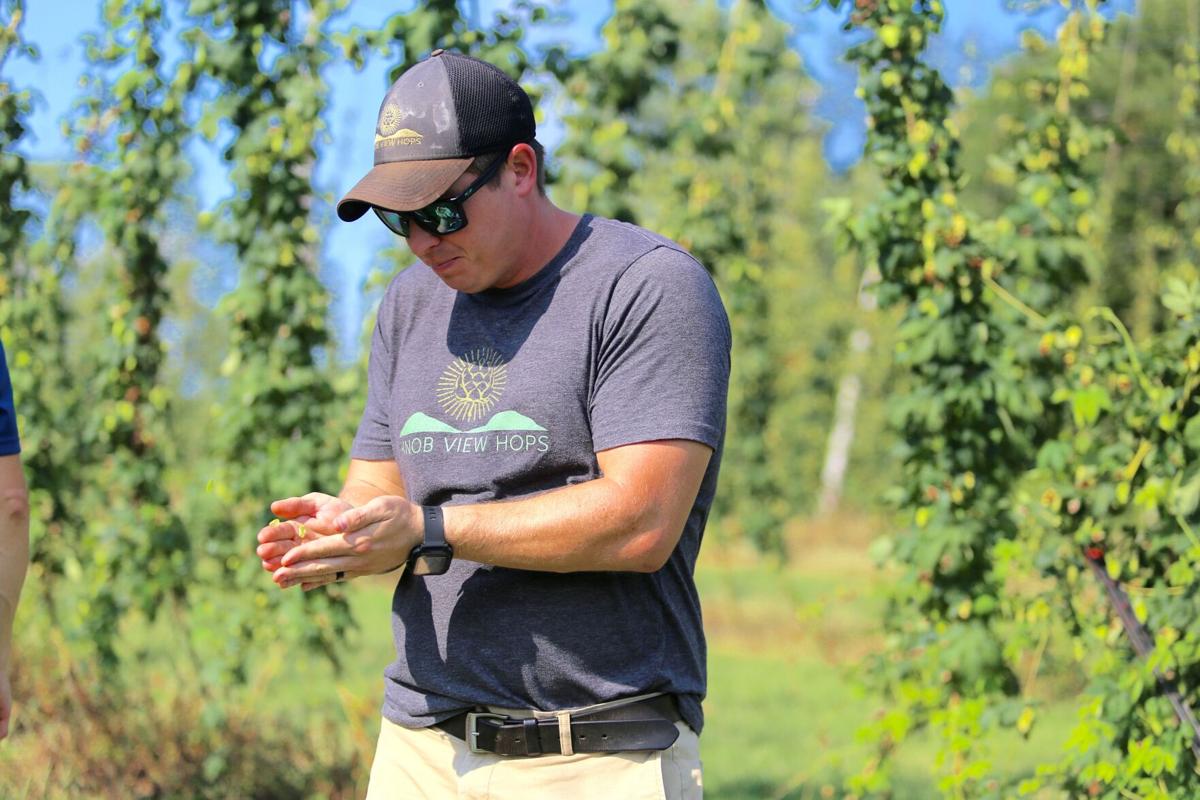 Kory Byrne, farmer at Knob View Hops in Floyds Knobs, rubs together a hop flower to release the aromatic oils contained in the plant. 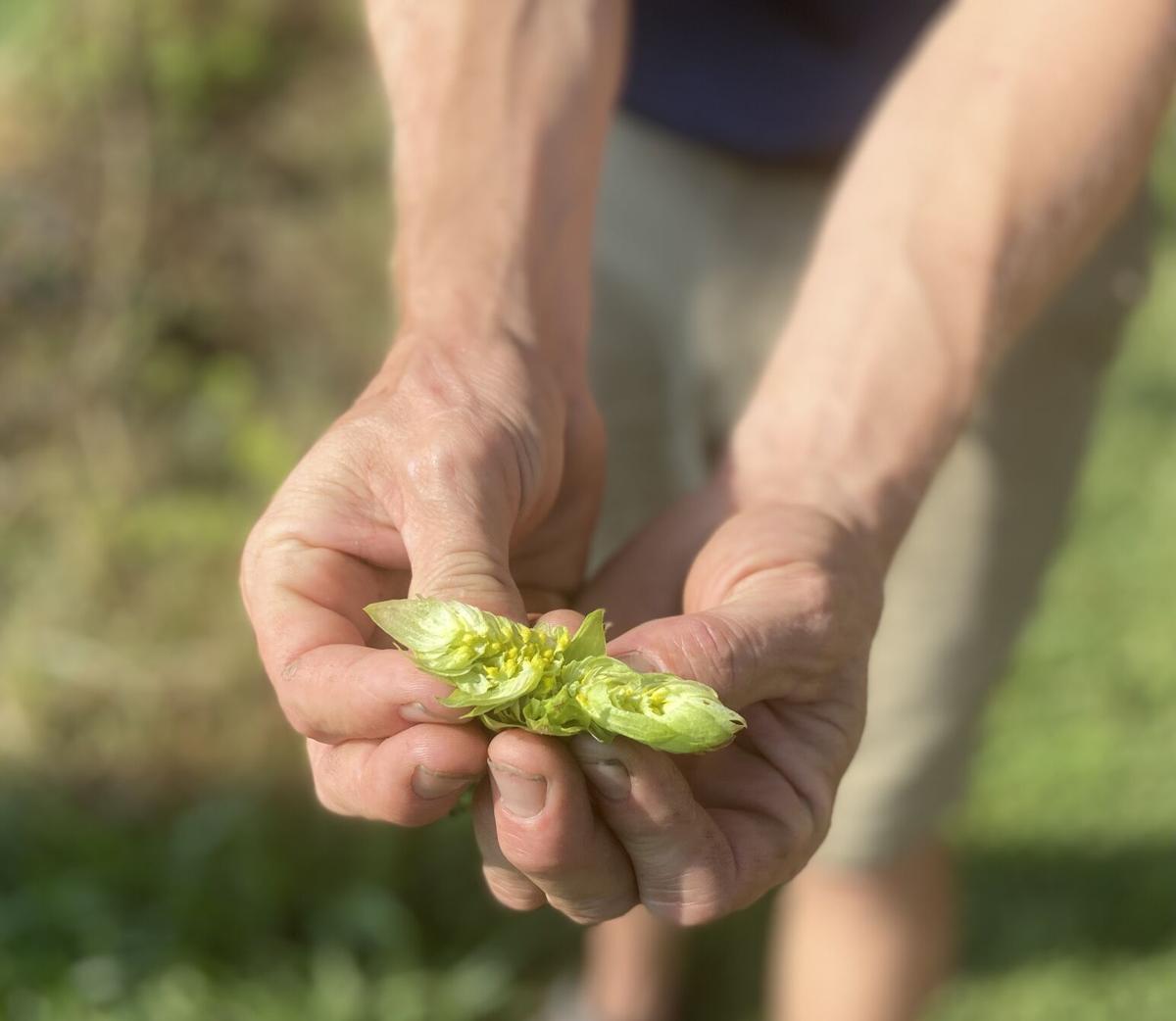 Hops from Knob View Hops in Floyds Knobs are used in local beer, including one of the flagship beers at Our Lady of Perpetual Hops. 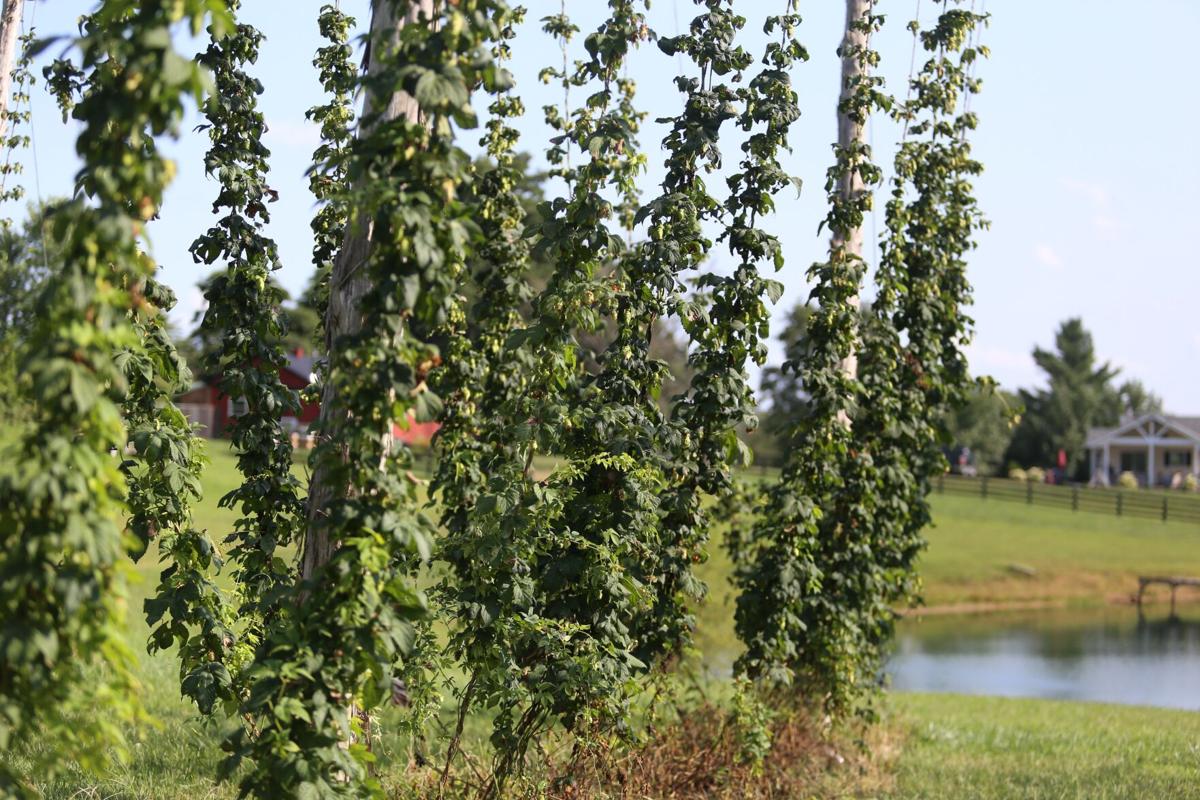 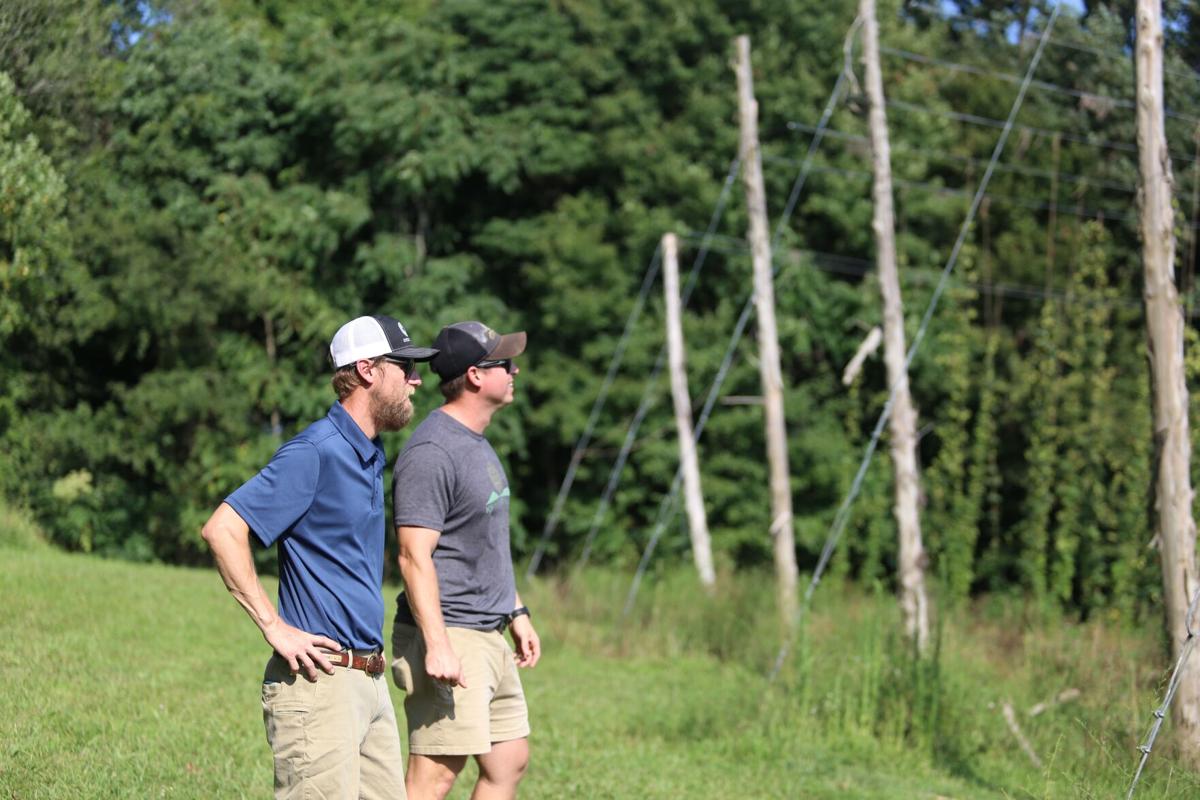 FLOYDS KNOBS — Cousins Tim Byrne and Kory Byrne don’t have a background in farming, but when they decided to try growing hops, a flowering plant used in beer, it has become an adventure that has expanded beyond just a hobby.

About four years ago, the cousins started Knob View Hops at a farm in Floyds Knobs. As they have grown this non-traditional crop that isn’t commonly found in the area, they have continued to learn along the way.

Their hops are regularly featured in beers at Our Lady of Perpetual Hops, a craft brewery in New Albany. About 590 plants are growing on the farm, including three varieties of hops.

The two cousins both have day jobs in addition to working their farm — Tim works in the equine industry as a farrier, and Kory works at Koetter Woodworking.

Five years ago, Tim bought the farm in Floyds Knobs, and Kory soon bought a nearby property. Tim said he has a green thumb, and he always has been interested in plants and gardening. He was inspired when he found hops listed in a Burgess Seed catalog.

“I was like, my neighbor is a home brewer, I like beer, that sounds cool, so we ordered some hop plants, had no clue with how they grow or anything,” he said. “These little sticks came in the mail, and we were like, that’s what we bought?”

They liked beer “as much as anybody,” Tim said, but they were mainly interested in the farming aspect.

They didn’t know much about growing hops at the time, so they completed some research about the plant.

Hops are cone-shaped flowers from the Humulus lupulus plant that add aroma and flavors to beers, including styles such as IPAs.

Tim said he initially used some steel to make a makeshift trellis about 10 feet tall, thinking that would be sufficient for the plants. However, hop plants can grow about 20 feet high.

“So about three, four weeks into the growing season, they were over the top of it, and we still had a long time to go, so we welded on to it to make it taller, and these plants just grew like crazy,” he said.

Tim said they have a saying on their farm: “if it’s worth doing, it’s worth overdoing.” So they dove in headfirst into their new venture.

“It’s been one of the most rewarding and fun adventures of our lives,” he said. “It’s taken us all over the place from buying our plants to buying this crazy harvesting machine that we didn’t know we needed at the time.”

They bought the plants in Michigan, and they bought the harvesting machine from Corning, New York, which is used to separate the hops from the vine.

“Everybody kept telling us, you have to have a picking machine, and we were like, no, it’s not a big deal,” Tim said. “After we got the machine, we realized that there was absolutely no doing this without a harvesting machine. It’s just not even feasible at all.”

“You have such a short window of when the crop is ready to come off. When the varietal is ready, you have about five days, and when it’s go time, it doesn’t matter what’s going on in your life, you have to pick, because the product will go backwards really quickly.”

They had to learn how to dry the hops and other intricacies of harvesting and preparing the hops that they didn’t realize were so “vitally important.”

“Then we realized, we’re like legitimately farming,” Tim said.

“It’s not so much a hobby anymore,” Kory added.

As the hop plants were growing during the first year, they started calling breweries trying to find buyers for their product. One of the first beers made with their crop was brewed by New Albanian Brewing Company.

Our Lady of Perpetual Hops was getting started about the same time as Knob View Hops, and when they first met, the brewery still had an empty building.

“The plants are growing, we go to Our Lady of Perpetual Hops, and they are like, look guys, obviously this is an empty building and we have great plans and we would love to do something with you all, but we’re not prepared right now,” Tim said. “Give us a call later.”

They were trying to figure out what to do with their crop, and they decided to just give the hops away the first year to start relationships with breweries.

They invited Our Lady of Perpetual Hops to see the farm, and the owners were impressed with the product. Once they harvested and processed the hops, the brewery created their first beer with the hops from Knob View called “Hops On My Knobs” an IPA that has become a flagship beer for the microbrewery.

Tim said they realized that many other local craft breweries use products sourced from all over the place, and they actually had a difficult time getting businesses to buy their locally-sourced product.

They also stay busy working on the farm, so it has been difficult finding the time to market to other breweries, they said.

But the partnership with Our Lady of Perpetual Hops quickly took off.

“Well [Our Lady of Perpetual Hops] was like we really want to strive to use as much local stuff as we possibly can, we want our flavors to reflect the local terroir of this community as much as we can,” Tim said. “We were like, this is great. They just trusted in us with it, and after the first run that they made, they were like this sets us apart from the other local craft breweries — we actually have local products in our beer.”

The partnership with the brewery gave them “the energy and drive” to perfect their product as much as possible, Tim said.

“We are at the university of Mother Nature, and she schools us every year,” he said.

Kory said they will likely start harvesting their current crop this weekend.

“It’s one of those bittersweet things — we spend all of growing season trying to get them as big and healthy as we can, and then we come through and cut them all off with a machete,” he said.

The Byrnes are focused on quality control. Once the hops are harvested, they are dried in a process that dehumidifies the plants but does not overheat them, so they do not lose the aroma or break down the oil or acid content in the cones.

They are later sealed in nitrogen-flushed bags that go into a freezer. They hold the product until the brewery is ready to brew the beer the next day.

“When they open that bag, it is the same as when we put it in,” Tim said. “We really strive toward that.”

Tim said the hops from Knob View have a different flavor and aroma profile than commercial hops grown in places such as Yakima Valley in Washington state, which grows most of the country’s hops.

“Because we’re so small, we can’t produce like the Pacific Northwest can,” Kory said. “So what we really focus on is high quality versus big quantity of product.”