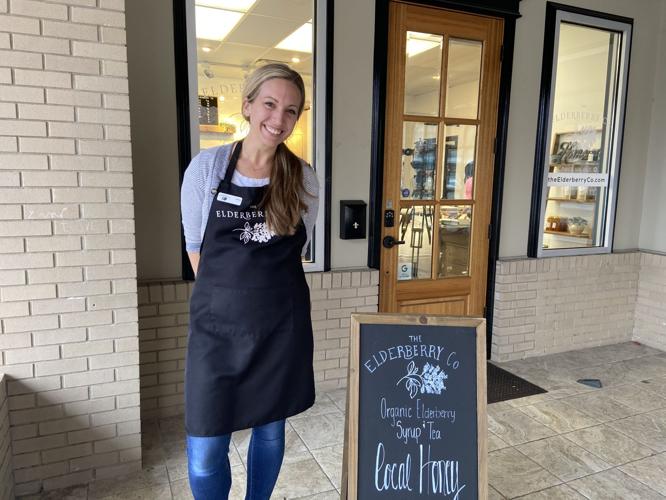 Jenny Watson, owner of The Elderberry Co. in downtown New Albany, is preparing to triple the space of her business by taking over the former Longboard’s Taco & Tiki location next door. Her business sells organic elderberry syrup. 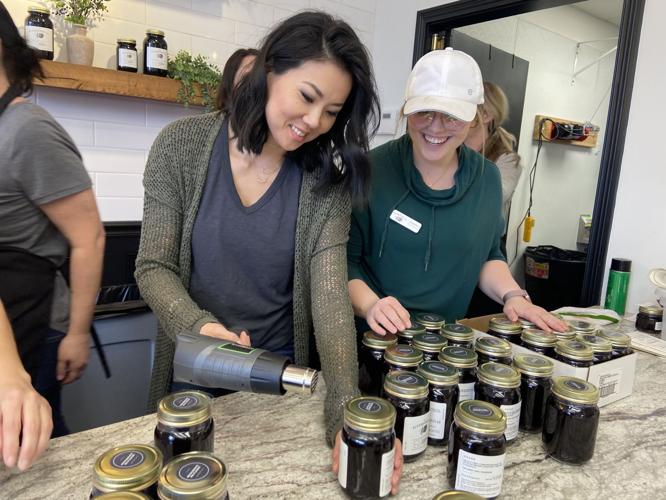 The Elderberry Co. team members Megan Snyder and Kimberly Pavan seal jars of elderberry syrup and prepare shipments for online orders Friday at the downtown New Albany shop. The shop will soon triple its space as it expands into the former Longboard's location. 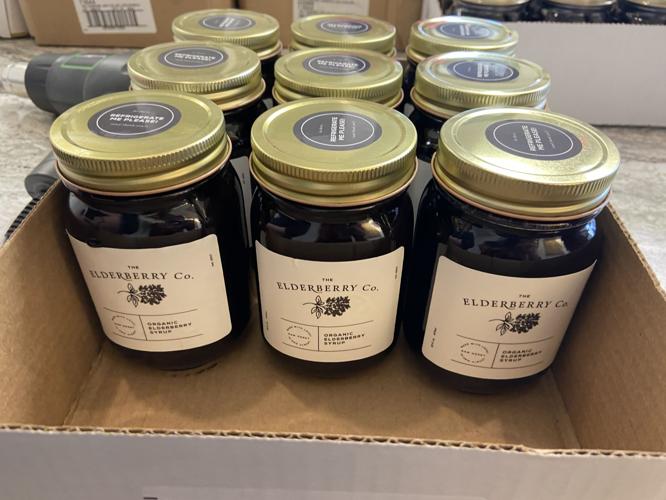 A box of elderberry syrup is prepared Friday at The Elderberry Co. in downtown New Albany. The shop is preparing to triple its space.

Jenny Watson, owner of The Elderberry Co. in downtown New Albany, is preparing to triple the space of her business by taking over the former Longboard’s Taco & Tiki location next door. Her business sells organic elderberry syrup.

The Elderberry Co. team members Megan Snyder and Kimberly Pavan seal jars of elderberry syrup and prepare shipments for online orders Friday at the downtown New Albany shop. The shop will soon triple its space as it expands into the former Longboard's location.

A box of elderberry syrup is prepared Friday at The Elderberry Co. in downtown New Albany. The shop is preparing to triple its space.

NEW ALBANY — A few years ago, Jenny Watson started her business by making batches of elderberry syrup in her kitchen at home.

Now, the former stay-at-home mom is preparing to triple the space of her small specialty shop in downtown New Albany.

Watson opened The Elderberry Co. at 302 Pearl St. in September 2019, but after outgrowing the current space, she is expanding the business’s production and shipping operations into the next-door Longboard’s Taco & Tiki restaurant space, which closed in January. She will continue to use the current space for a storefront, which sells organic elderberry syrup, elderberry tea and local honey, and the business will take over the new space in April.

Elderberries are used to boost immunity, and Watson recommends spoonfuls of the syrup to lessen severity of colds, flus and allergies. Several years ago, her son’s colds were frequently turning into ear infections, and she began making elderberry syrup as a home remedy.

“I felt, there must be something I can do for my child to make him feel better,” she said. “And so that’s when I remembered elderberry syrup, so I made my own batch, and I gave him elderberry syrup when he got his next cold. And that cold never turned into an ear infection, and we stayed out of the doctor’s office. So for me personally in my family, it’s been a huge benefit.”

Two years ago, she posted on Facebook that she was making a batch of elderberry syrup, and she asked if anyone wanted to try a sample. Interest in the syrup quickly grew, and in 2018, her business began.

For the first year of her business, she would make the syrup from her kitchen at home. She started selling it at the New Albany Farmers Market, and her sales started to grow so much that she needed a commercial kitchen with more space. She then moved the business into Mesa: A Collaborative Kitchen on Pearl Street, and she launched online orders.

At Mesa, she went from a few hundred orders a month to a few thousand a month.

“I realized, if I wanted to grow any more than I had grown already, I couldn’t do it in Mesa anymore — I needed my own space to make my syrup more efficiently and in bigger batches.”

So Watson moved into the space on Pearl Street, but the small storefront has limited space for preparing shipments. When the space next door opened up, she quickly recognized the opportunity for expansion.

She currently employs about 10 people, but with the expansion, that number could go up to about 20. The bigger kitchen could allow for an increased batch size.

About 70 to 80 percent of The Elderberry Co.’s sales are online orders, she said, and the rest of sales are in-store and wholesale. Currently, the shop has little room to prepare shipments for the amount of orders it is receiving.

Throughout the winter, they have been preparing about 100 to 200 online orders per day, and in the past week, it has increased to 200 to 400 orders per day. The business has shipped the syrup to all 50 states with the online orders.

Although most customers just take spoonfuls of the syrup — one tablespoon a day is recommended — it can also been mixed with tea, smoothies, juice and coffee, Watson said. The elderberries are sourced from Ukraine and Bulgaria, and her staff makes the organic syrup in 45-gallon pots in the store’s kitchen.

People are often surprised by how good the syrup tastes, she said.

“Essentially, it’s just a berry blend of elderberries and aronia berries, and the spice blend is ginger, clove and cinnamon, and then we sweeten with raw honey,” Watson said. “I always say it tastes like Christmas — it’s a Christmasy kind of taste, and then it’s brewed for about an hour, so all that taste is in the air, too, with the smell, and that’s why.”

Watson looks forward to hiring additional staff at The Elderberry Co. Over the last six months, she has been able to build a team where the staff have a good time working together in an “uplifting” environment, she said, and she hopes to expand opportunities for community members in need of employment.

“I want to open that up to more people, so I’m going to start moving in the direction of second-chance employment where we partner with ministries that are helping women come out of addiction or incarceration and things like that, and to be able to give them a stepping stone to maybe what their dreams or goals are — to give them work experience, a good reference, and even to be able to work in such a positive and uplifting environment,” she said.

Kimberly Pavan, a team member at The Elderberry Co., has been involved in the business for two years, and she has been excited to see the expansion of the business.

“At the beginning, I was in Jenny’s garage packing boxes, like doing all the behind the scenes work,” she said. “We started off so small, and when I saw little packages of 12 go to 100 in the wintertime, I was mind-blown by the boost in our sales.”