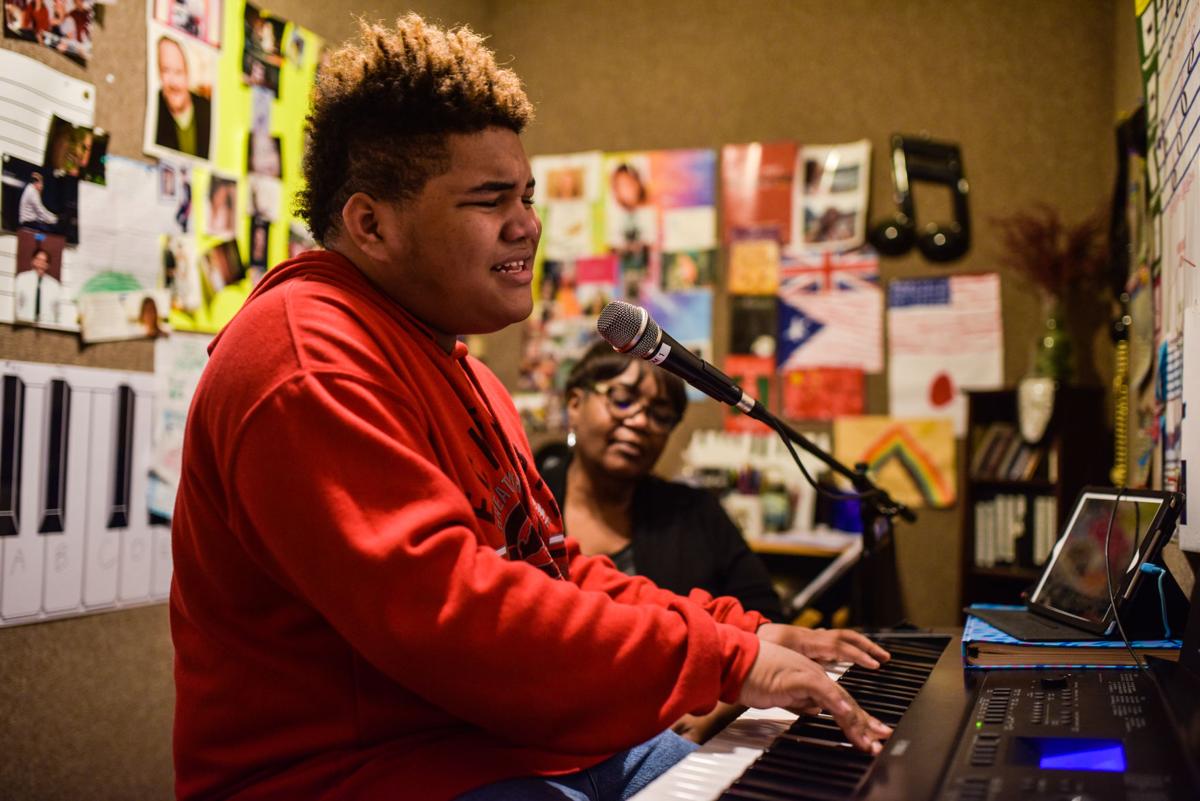 Jackson Snelling sings during a private lesson with music instructor Sheila O'Bannon at Maxwell's House of Music in Jeffersonville. 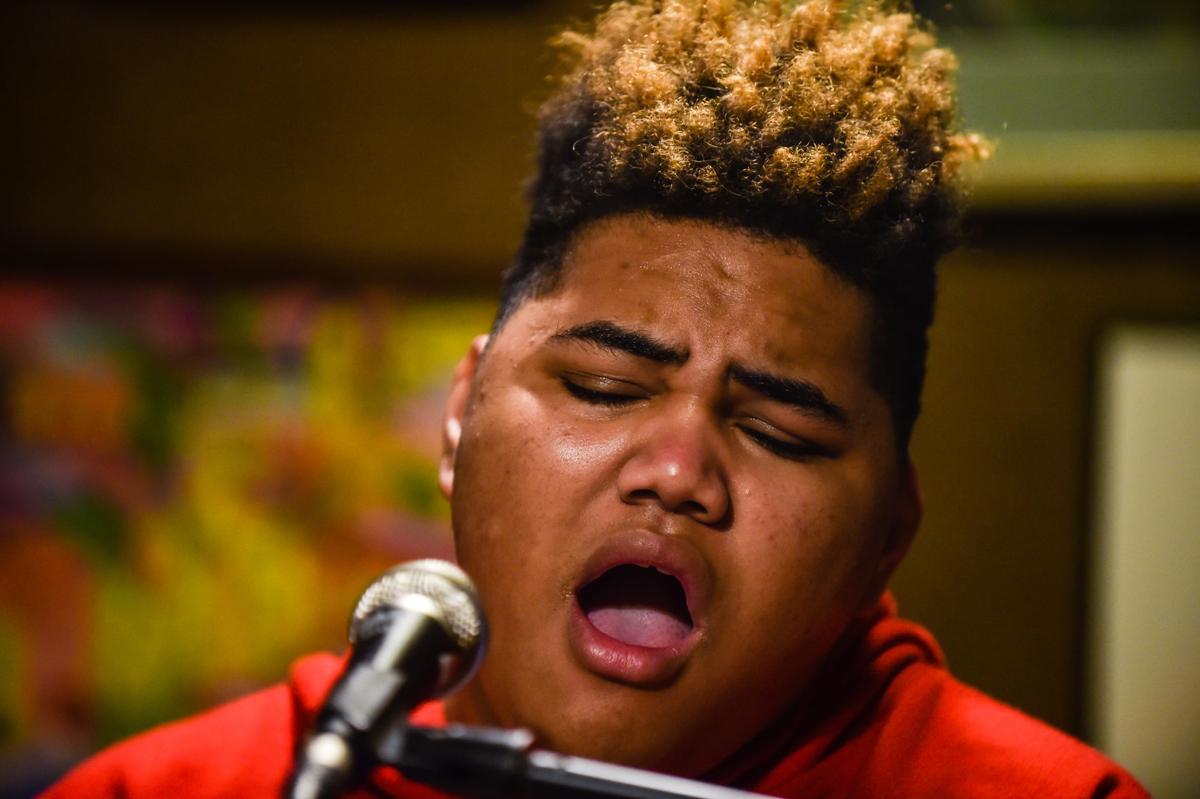 As 16-year-old musician Jackson Snelling pursues his talents as a singer and songwriter, he has discovered a powerful outlet for his emotions. 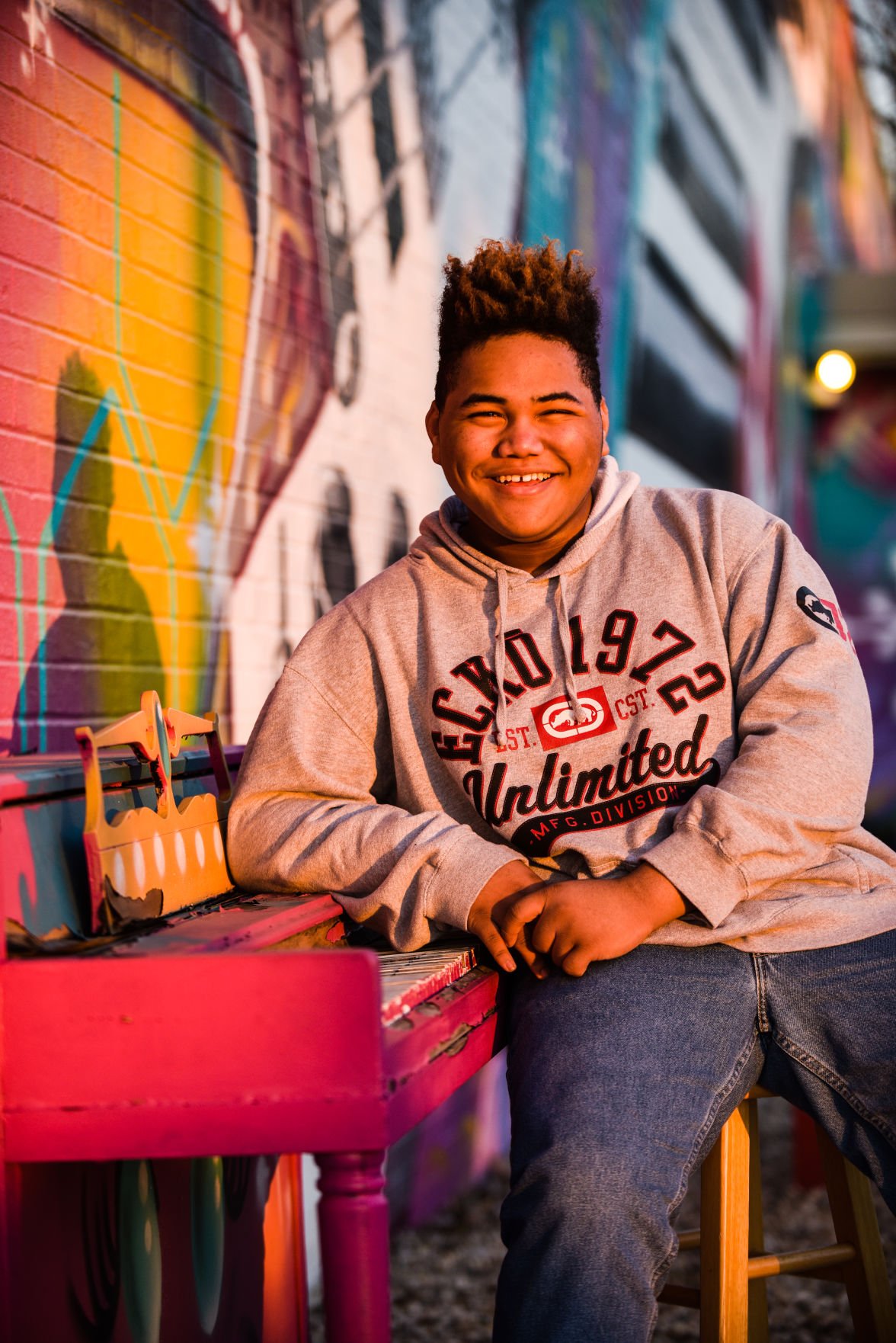 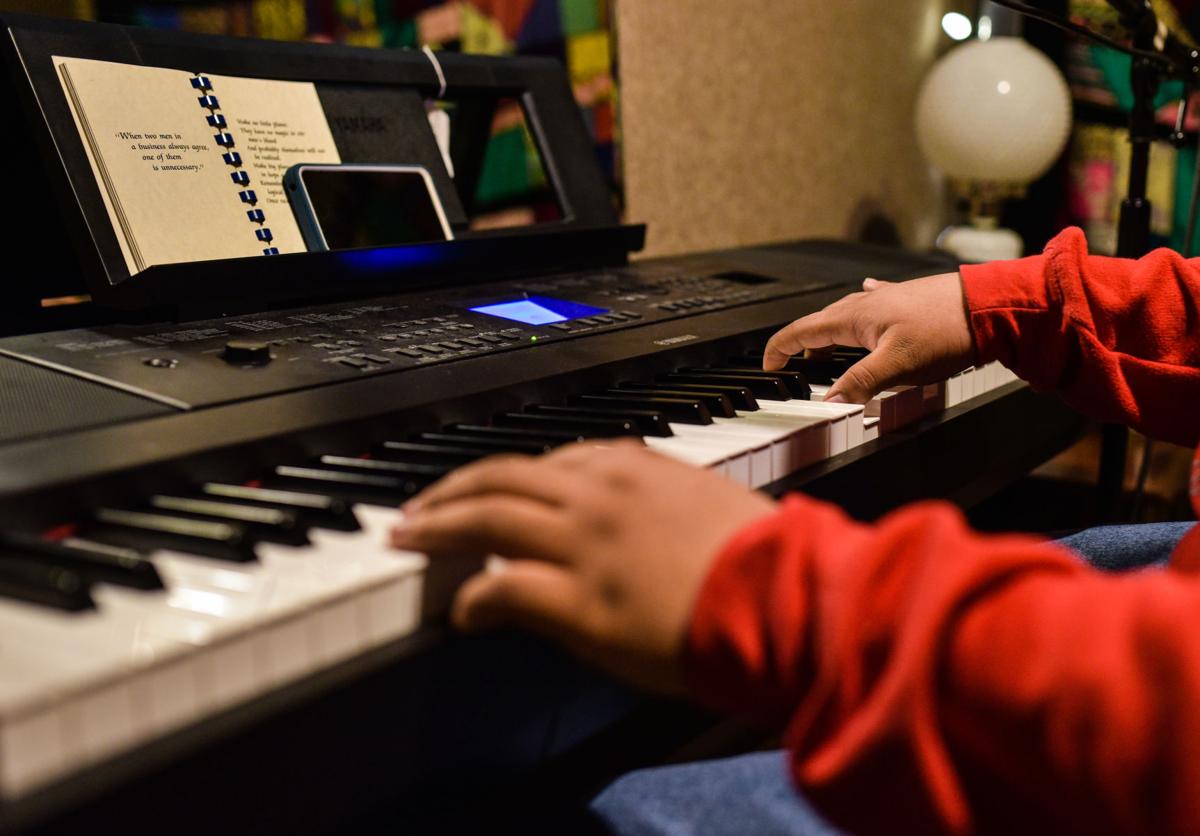 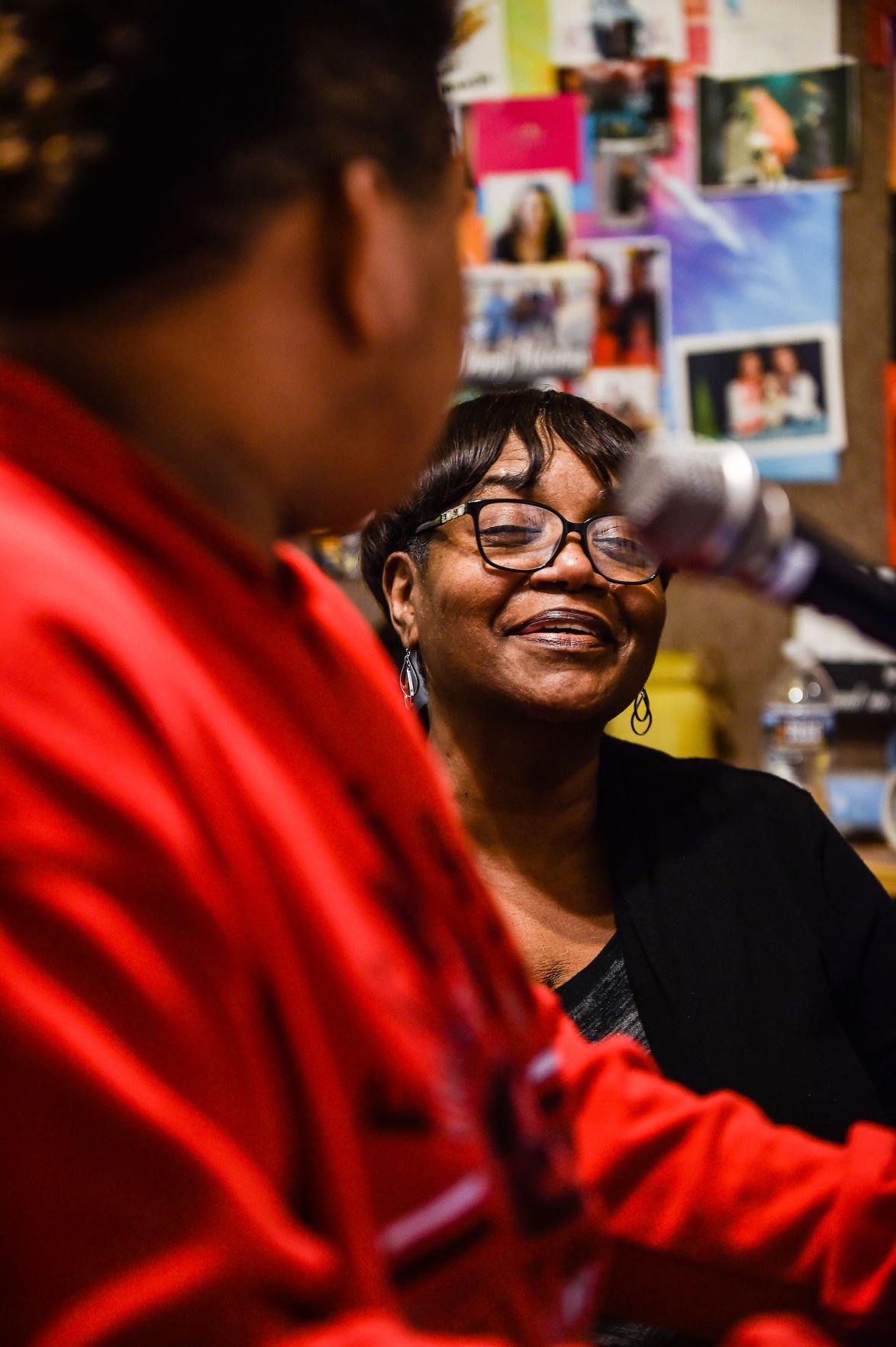 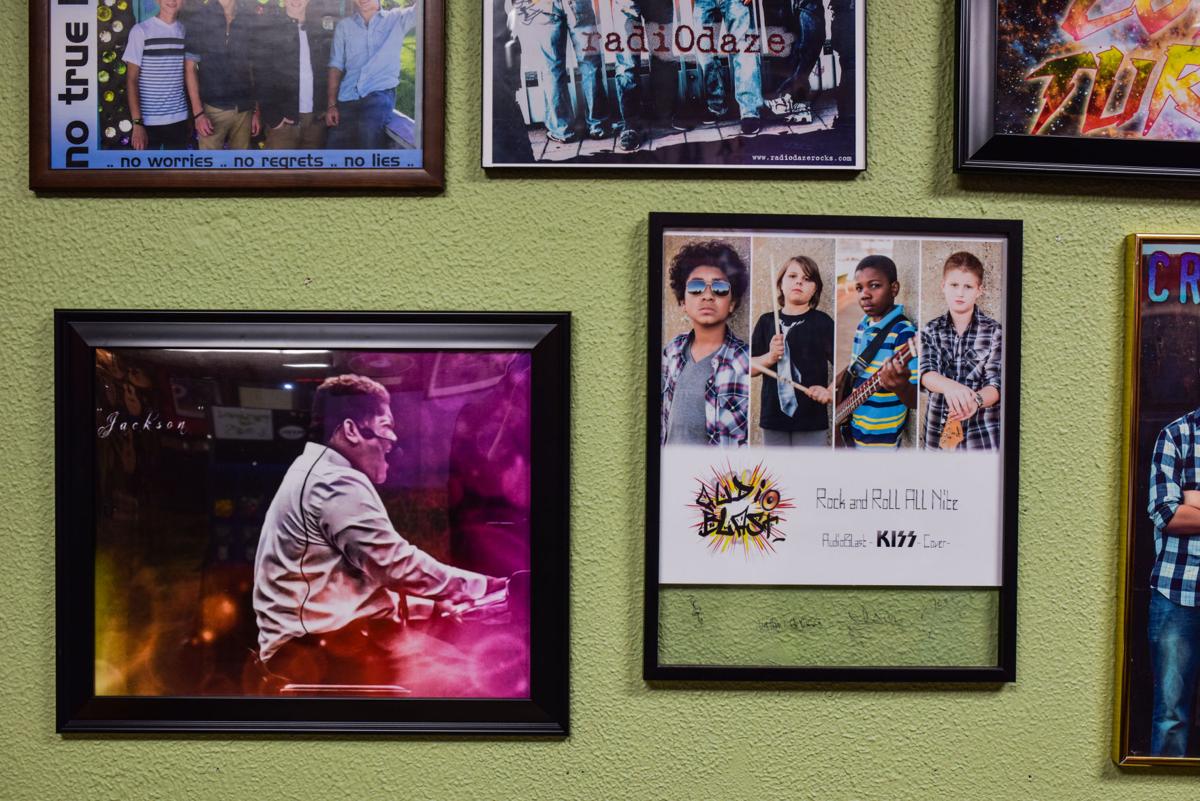 A portrait of Jackson Snelling hangs in a hallway at Maxwell's House of Music in Jeffersonville, where he takes private lessons. 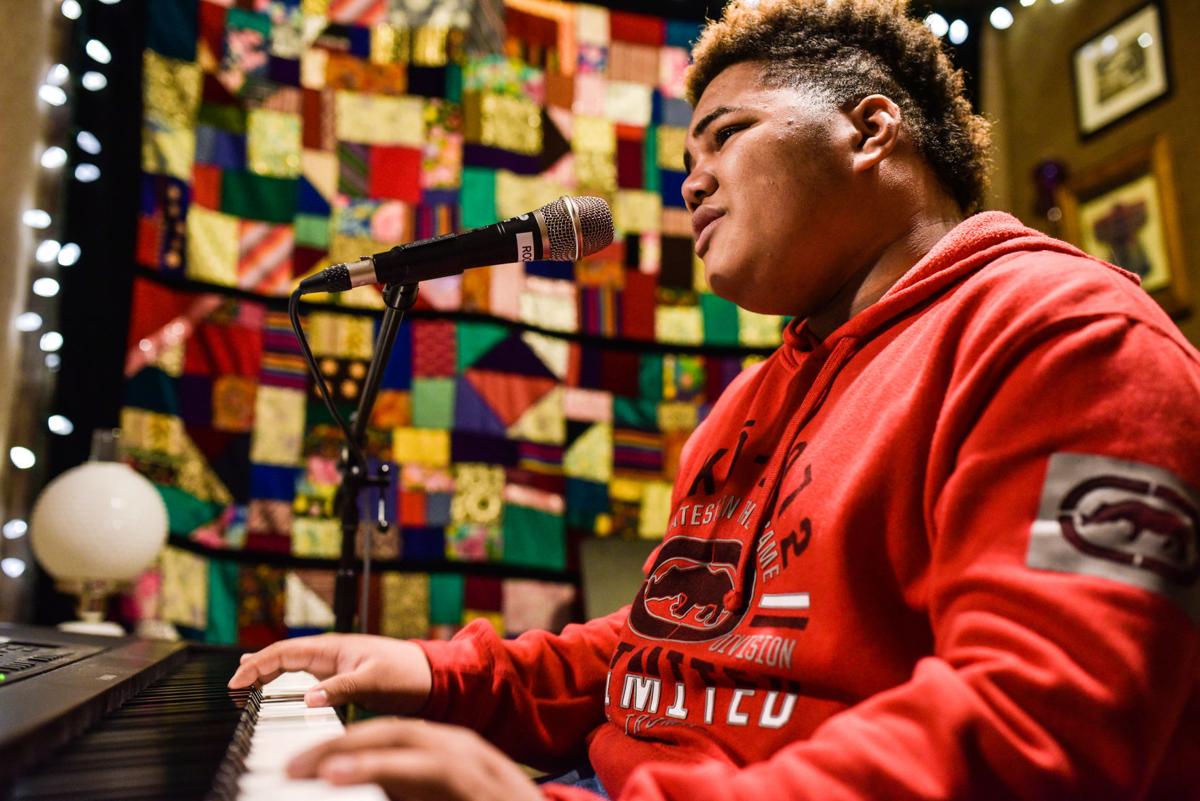 Snelling often draws upon personal experiences in his music, including losing his father to a heart attack at only 7 years old. That experience became the basis for Jackson’s first original song, “Please Listen,” which he says he wrote in about five to 10 minutes.

Jackson Snelling sings during a private lesson with music instructor Sheila O'Bannon at Maxwell's House of Music in Jeffersonville.

As 16-year-old musician Jackson Snelling pursues his talents as a singer and songwriter, he has discovered a powerful outlet for his emotions.

A portrait of Jackson Snelling hangs in a hallway at Maxwell's House of Music in Jeffersonville, where he takes private lessons.

Snelling often draws upon personal experiences in his music, including losing his father to a heart attack at only 7 years old. That experience became the basis for Jackson’s first original song, “Please Listen,” which he says he wrote in about five to 10 minutes.

AUSTIN — Music is so much more than a hobby for 16-year-old Jackson Snelling — it has changed his life.

For the teenage singer/songwriter, music is his dream career. It's a way to help him cope with grief. It's a release for his emotions.

"It’s always been a passion of mine," Jackson said. "I’ve always wanted to follow this path and see where it takes me, and here I am."

Jackson, who lives in Austin, recently released his first original song, along with a music video. He performs pop, country and R&B, and he performs gigs throughout the area.

Jackson is on the autism spectrum, which has made it difficult to express his feelings in the past. But since he's started to pursue his talents as a singer and songwriter, he has discovered a powerful outlet for his emotions, including the pain he’s experienced after experiencing multiple losses.

Jackson has been singing since he was a young child, and his voice has earned him the nickname “Bruno,” after Bruno Mars, one of his favorite singers.

For the past few years, he has been taking voice and piano lessons at Maxwell's House of Music in Jeffersonville. The staff members there have helped him hone his performance skills, find gigs and produce his own music.

However, songwriting is relatively new for Jackson.

He has journaled for years, he said, and he realized that some of his writing could be turned into song verses. He wrote his first song in 2018.

Jackson often draws upon personal experiences in his music, including losing his father to a heart attack at only 7 years old. Throughout the years, having a missing piece of the family has been difficult for him, particularly during the holidays, Jackson's mother, Dacia Snelling said.

His older brother, Dawson, has a more severe form of autism, and he has trouble understanding death. After the loss of their father, Dawson has continued asking his brother when their dad would return, and Jackson would have to repeatedly explain the situation.

"It’s been difficult for Jackson being 7 and growing up having to go through this almost daily with his brother asking, hey, when’s Dad coming home?" Dacia said.

That experience became the basis for Jackson's first original song, "Please Listen," which he says he wrote in about five to 10 minutes.

"My dad was really heavy on my mind that day," he said. "I just came home, went to my piano room and just pretty much sang exactly what I was feeling. Then after all that, I was like, wait, that didn’t sound too bad, so I went back and recorded it, and then took some verses and wrote the song."

In addition to the death of his father, Jackson has experienced many other losses in recent years. One of his favorite teachers at Austin High School died of cancer, and two of his friends died in a car crash.

One of his friends recently died from suicide, and Jackson was asked to sing at his funeral, which was one of the toughest experiences he has faced, he said. He wrote another song about the loss, which has not yet been released.

For Jackson, both writing and performing his songs serve as coping mechanisms that allows him to release his emotions.

"It’s an awesome stress reliever to be able to put your feelings on paper and just sing it," he said.

PURSUING A CAREER IN MUSIC

Jackson said his autism is mainly behavioral — it can be difficult for him to keep his emotions in check, and he has trouble understanding some social cues.

He said he has become much more social since he started taking lessons at Maxwell's, and now that he's started songwriting, he doesn't hide his emotions as much as he used to. His music tells people how he feels, he said.

Sheila O'Bannon, his voice and piano coach, is like his "second mom," according to Jackson. He already came equipped with a beautiful voice when he came to Maxwell's, she said, and he was eager to learn piano and songwriting.

In his years at Maxwell's, he has grown from a shy kid to a musician who's not afraid to entertain audiences onstage, she said.

"He provides the example for anyone that you can do things that you can’t imagine if you just keep very persistent," O'Bannon said.

Jackson has found plenty of support within the community. He’s received a standing ovation after performing his songs for his school, and he’s performed for WHAS 11's Great Day Live, the Kentucky State Fair and many other local gigs. In 2018, he won the Kentuckiana Karaoke Contest.

Since the release of "Please Listen" in December, Jackson has also received both national and international attention from fans, including people who have reached out through social media to share their own stories of loss.

People he's never met feel close to him because of his music, he said, and he likes to reply to the many messages and comments he's received. He tries to write relatable music about topics that are often difficult to address.

"I try to express all of my emotions into my music so people know that they’re not alone," he said. "When you lose someone really close to you, it’s hard to describe exactly how you’re feeling. It could be mad, sad, confused. I try to channel all of that in my music so that people can relate."

Jackson's music is therapeutic both for him and for other people, O'Bannon said.

"He believes music saved his life, and he is working hard to for it to be that way for other people," she said.

The musician has big ambitions for his future — he hopes to be discovered, he said, and he hopes to be famous someday. He’s already auditioned twice for "American Idol."

Jackson is always thinking of his future and ways to care of his family, Dacia said, and he is much more focused on his music than many others his age.

“This is his career, so he is so serious about this,” she said.

Dacia said she’s amazed to see the amount of support Jackson has received from the community.

"What do they tell you, that you have to be a star in your hometown before you become a star anywhere else?” she said. “I think he’s got that."