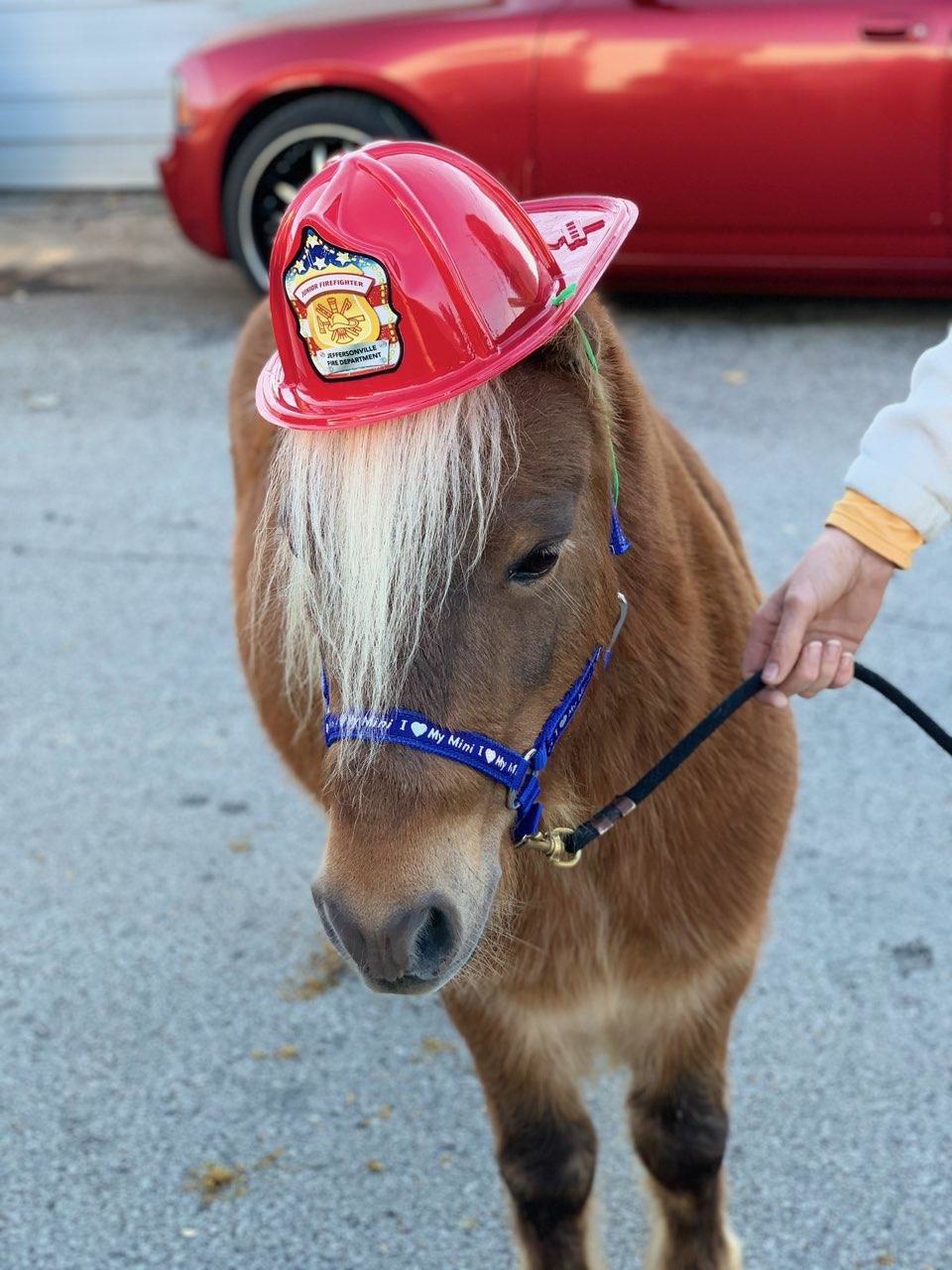 Sebastian was one of two miniature therapy horses to visit firefighters of the Jeffersonville Fire Department Friday. 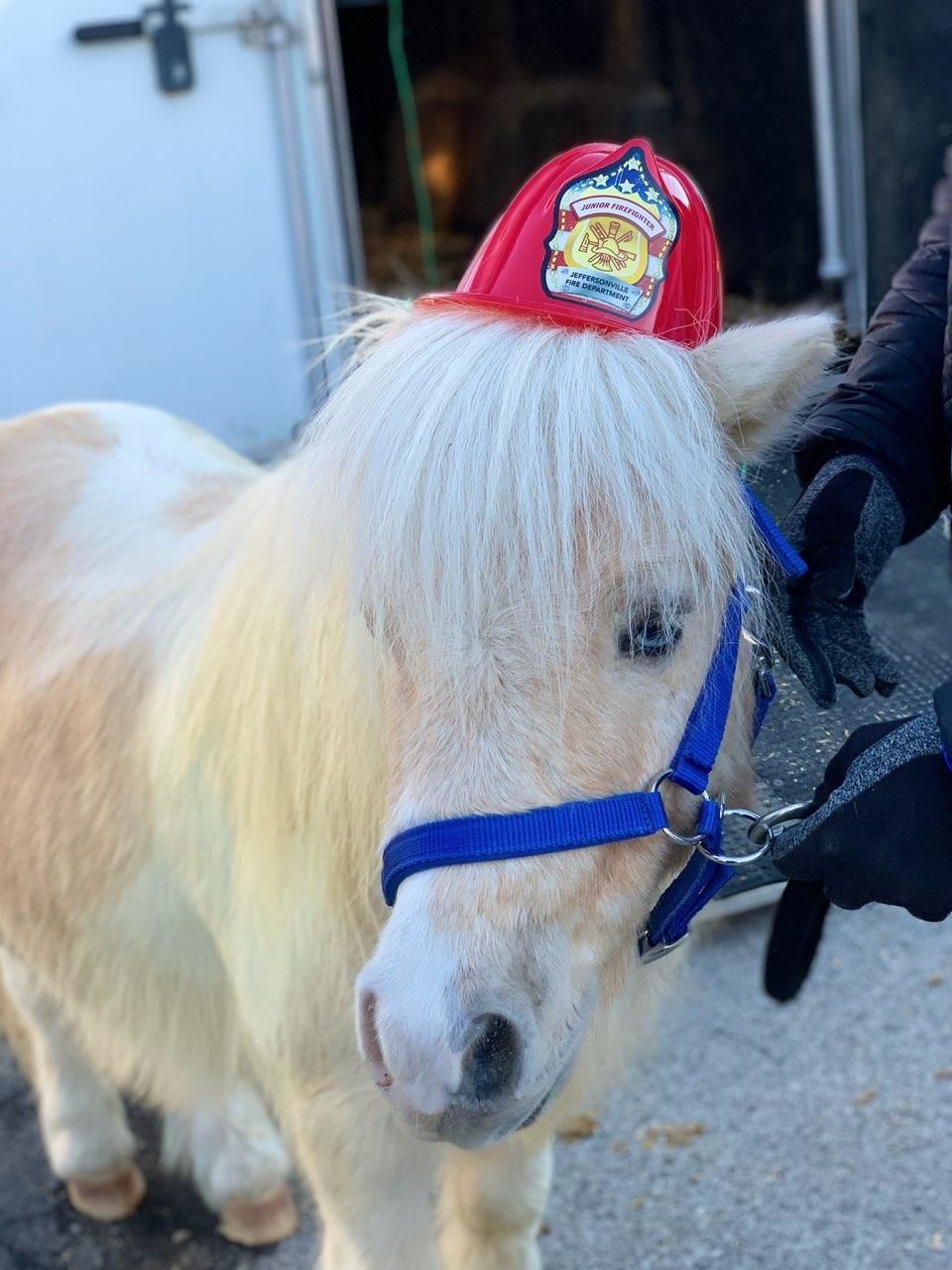 Teke was one of two miniature therapy horses from Opening gates, Inc. to visit the firefighters at the Jeffersonville Fire Department Friday. 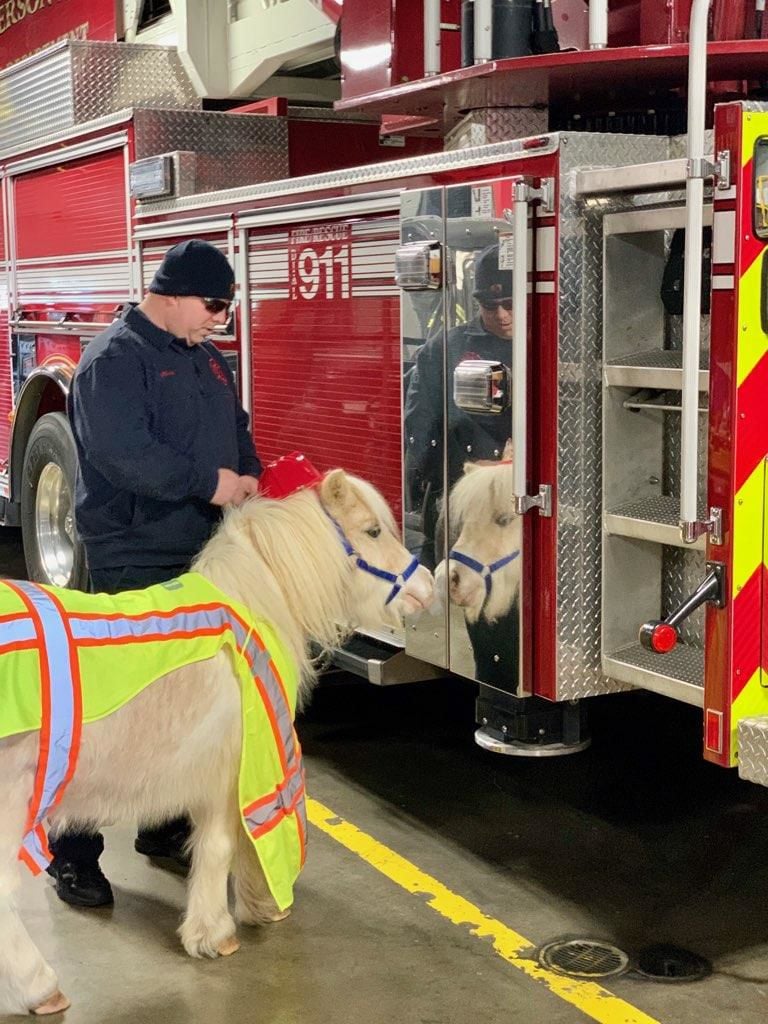 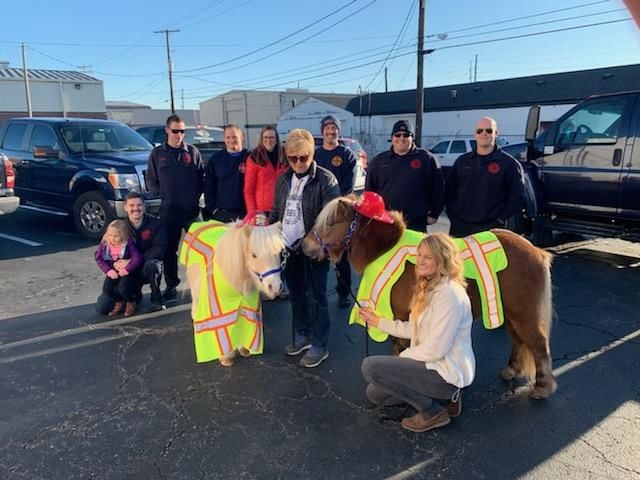 Sebastian was one of two miniature therapy horses to visit firefighters of the Jeffersonville Fire Department Friday.

Teke was one of two miniature therapy horses from Opening gates, Inc. to visit the firefighters at the Jeffersonville Fire Department Friday.

JEFFERSONVILLE — A local nonprofit organization brightened the day for some Jeffersonville firefighters recently by bringing some special guests to the firehouse.

On Friday, Teke and Sebastian, two miniature therapy horses from Opening Gates, Inc., made a visit Friday to fire station No. 1, in a session to help ease the tensions firefighters face on a regular basis.

During the visit, firefighters walked with and petted the horses, and even had them race one another, a firefighter running alongside each with its lead in hand.

Firefighter Jason Wisenauer's wife, Shara, operates Opening Gates and offered the service to the firefighters. The organization specializes in equine therapy for individuals, families and groups — including social skills and self-esteem improvement for youth.

"I think it went very well," Wiesenauer, the firefighter, said. "It took a second for them to warm up but all day they were asking when the horses were going to be there so I know they were excited."

He said things like Friday's visit are crucial to combating some of the things firefighters are faced with during emergency situations that can build up over time.

"We talk about cumulative stress in the fire service so over a 20- or 30-year career, your stress slowly builds up until you're about to retire and you're anxious and angry and we don't want that," he said.

"Each day we get something special like the horses or therapy dogs, it eases some of the stress so it kind of balances out the books — at least for that day, if not longer."

He said the firefighters try to do other things too, like go to dinner together once a month and stay active in the community, to help stay positive in the stressful environment.

"With firefighters, we're supposed to be big strong tough guys and girls; we're not supposed to show emotions about things that we see or do or experience on the job," Sgt. Justin Ames, with the Jeffersonville Fire Department, said. "So we build it up and it affects us mentally. We exercise our bodies, but we also have to exercise our minds and relieve some of those mental stresses."

A firefighter might be faced with finding a person in a burned home that wasn't able to be rescued in time, responding to a child who died from Sudden Infant Death Syndrome, or being first on the scene of a fatal motorcycle crash.

"There's times when you make runs that you cry after it," he said. "It's all about learning how to deal with it and if you never learn what's happening to our mental health, we never really understand what's going on."

He said that can manifest in various ways — from firefighters becoming withdrawn or angry, to experiencing things like post traumatic stress disorder when they pass an area where they have responded to a tragic situation.

But with the horses, Ames said Shara explained to him, "They forget about all that because they just think about how cool it is what they're doing," he said.

"That's another reason we like to do a lot of positive things in the community — it actually heals us. If we saturate ourselves with the positive stuff more so than the negative, then it counteracts and makes our mental health better."

Opening Gates, Inc. is a 501c3 nonprofit based in Carl County. To learn more, email openinggates@yahoo.com or visit the organization's Facebook page.

A fundraiser is planned for this Wednesday, Nov. 6 starting at 5:30 p.m. at Growler's in Jeffersonville.

Jerry S. Curry passed away on April 1 at Methodist Hospital in Indianapolis, IN. He was born at the same hospital on November 15, 1943 to Bernard and Vivian (Sanders) Curry. He is survived by his wife, Sara (Denie) Curry and her children, daughter Catherine (Phil) Anderson and children, son …

Timothy "Job" Leadingham, 37, went Home to be with the Lord April 4, 2020 after a long, hard fought battle that ended in victory with him going to his Eternal Home in Glory. Job was born to Tim and Ann Leadingham in Chickasha, OK, the oldest of four siblings. Job was more than a son, he was …

Ilma Hutcherson Chaney, 86, of Hodgenville, KY, went to be with her Heavenly Father on Monday, April 6, 2020. with her family by her side. Ilma was born on July 13, 1933 in Larue County, KY to the late Volney Eldred Hutcherson and Bernice Ray Johnson Hutcherson. Ilma was a teacher and was re…