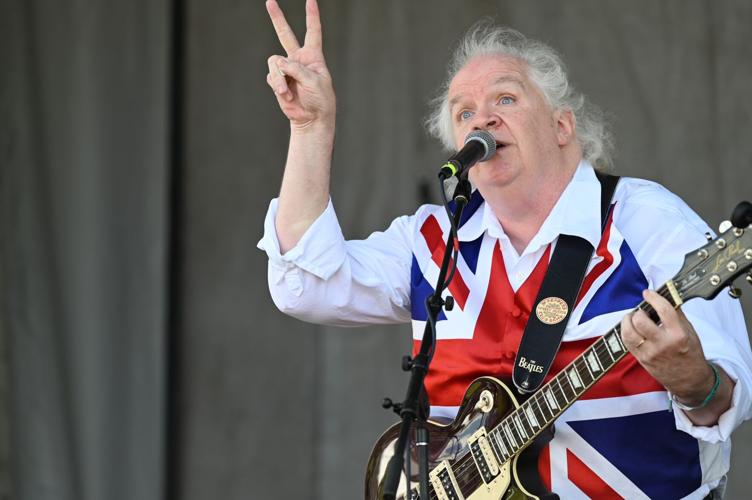 Rigbys bandmate, Gary Metcalf, flashes a peace sign at Sunday afternoon‘s crowd during performances by area bands at Penny Lane at the Park in Jeffersonville. Rigbys was among the bands featured. 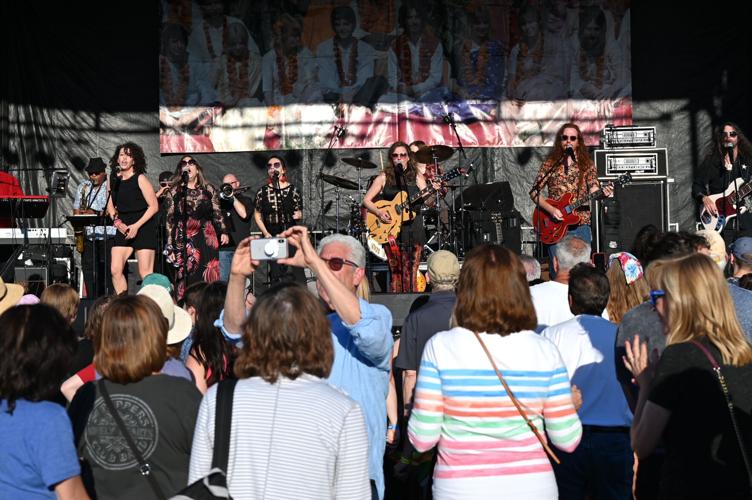 The Newbees entertained the crowd at Penny Lane at the Park with near perfect weather Sunday evening. Event organizers touted the weekend show as one the best they’ve produced. 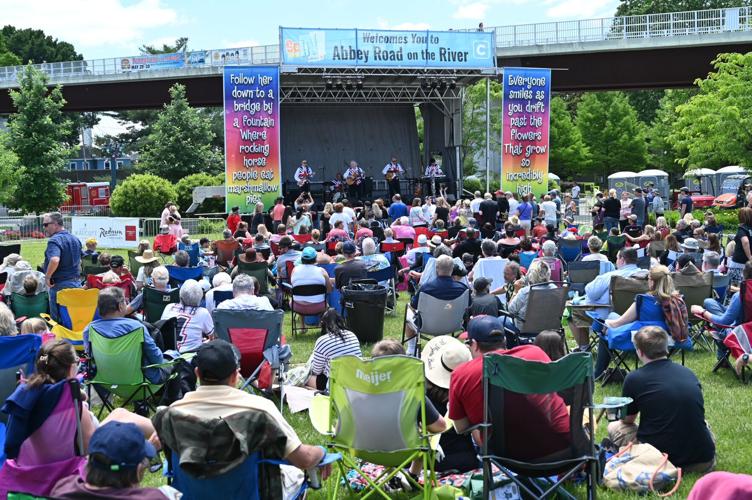 About 3,000 people were in attendance Sunday at Penny Lane at the Park in Jeffersonville. About 5,000 attended the music festival Saturday and Sunday at Big Four Station.

Rigbys bandmate, Gary Metcalf, flashes a peace sign at Sunday afternoon‘s crowd during performances by area bands at Penny Lane at the Park in Jeffersonville. Rigbys was among the bands featured.

The Newbees entertained the crowd at Penny Lane at the Park with near perfect weather Sunday evening. Event organizers touted the weekend show as one the best they’ve produced.

About 3,000 people were in attendance Sunday at Penny Lane at the Park in Jeffersonville. About 5,000 attended the music festival Saturday and Sunday at Big Four Station.

JEFFERSONVILLE — The Abbey Road on the River music festival isn’t taking place until Labor Day, but over the past weekend a new event brought thousands to downtown Jeffersonville to enjoy the music of The Beatles.

Event producer Gary Jacob said Penny Lane at the Park was a “brilliant, beautiful event,” and it was a successful “warmup” to the upcoming Abbey Road on the River festival.

Abbey Road typically takes place Memorial Day weekend. It was canceled last year due to the pandemic, and this year, organizers moved it to Labor Day weekend.

“We are coming out of a long shutdown, and it had been two years since we had done a festival,” Jacob said.

About 5,000 people came out for the two-day music festival, and Friday’s preview events brought in 500 people, according to Jacob.

About 2,000 people came to the festival Saturday despite the chilly weather, and about 3,000 people attended Sunday.

Jacob said that in his four decades of organizing events, Penny Lane at the Park is one of a few he would rate as a “10 out of 10.”

The event “hit the bullseye,” he said.

Jacob intends to continue the Penny Lane at the Park festival in coming years in Jeffersonville, and he is also considering the expansion of the small festival to other cities. He hopes to get sponsorships that would allow the festival to take place in different markets.

Floyds Knobs resident Ashley Schulz attended both days of the festival, as well as the two preview concerts on Friday. Attending the Abbey Road on the River festival is a longtime family tradition — her parents have attended the festival every year since 2008, and she has attended each festival since 2012.

As she enjoyed Penny Lane at the Park with her family and friends, it felt like “going back home,” she said.

“It honestly felt like it was yesterday that we had been there,” she said. “I know it’s been two years, but we felt like we were right back in it. I saw all my friends I’ve seen at every Abbey Road, and it felt almost back to normal.”

Schulz is fully vaccinated against COVID-19, so she felt safe the entire time she was attending the music festival, she said. She will be back for Abbey Road on the River in September.

John Auker performed at Penny Lane at the Park with Hard Day’s Night, a Beatles-tribute band based in Cleveland. He performs vocals and guitar in the role of George Harrison.

The band has performed at Abbey Road on the River since the Beatles festival was founded in Cleveland in 2002.

The band hasn’t been able to perform at many live events during the pandemic, so they were happy to get back in the swing of things. The band is also planning to perform at Abbey Road on the River in September.

As they performed, there was a feeling of “mass elation,” Auker said.

“Everyone was just so overjoyed to be back singing and dancing and being together,” he said. “It was great.”

Jeffersonville Mayor Mike Moore said Penny Lane at the Park was the “perfect medicine” for the past year.

Moore attended the festival Saturday, and one of his friends from high school came from Pennsylvania to attend the event.

“It’s always such a fun, peace-loving crowd, and with everything that’s been going on [with the pandemic], it’s great to see so many people come out and just smiling and having a good time,” he said.

Moore said he is excited to begin the city’s summer concert series at RiverStage. Starting this Friday, there will be free concerts staged on Fridays throughout the summer.

To create more space for outdoor dining and pedestrians in downtown Jeffersonville, the city will close Spring Street from Maple Street to Riverside Drive from 6 p.m. to 11 p.m. on these Fridays.

Moore looks forward to “get back to the way things were,” he said.

The past year was tough, Jacob said, and the pandemic caused the festival to lose a full year of revenue. But he feels positive about the future for Abbey Road on the River.

“We’re OK — we’re not hurting, and we do have a chance to come out of it better than ever,” he said.

Jacob said he is still working out the specifics of plans for Abbey Road on the River, and he notes it will still be somewhat scaled compared to previous years. There will likely be fewer stages and musical performances, and it might take place across four days instead of five.

Usually, more than 20,000 people attend the music festival, but Jacob said there will likely be fewer in attendance. He is viewing this year’s Abbey Road as a “next step to get to next May, when there will be a full return to normalcy.”