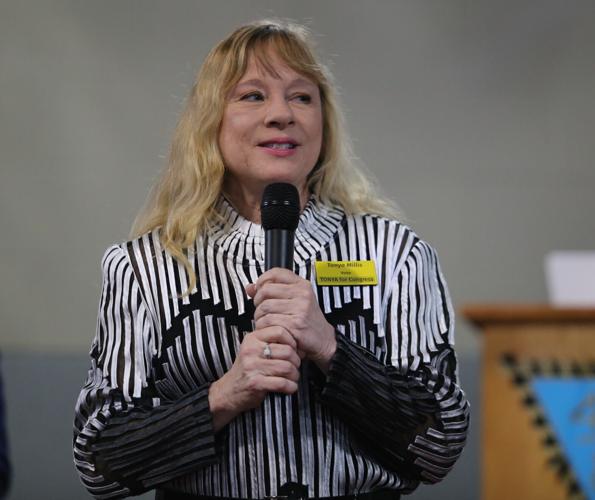 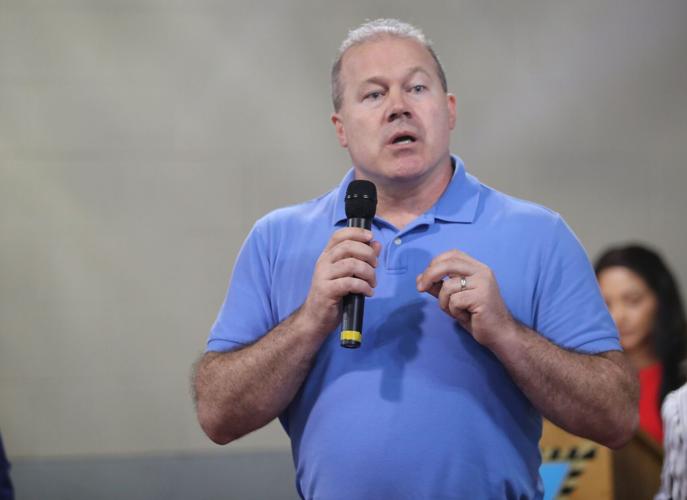 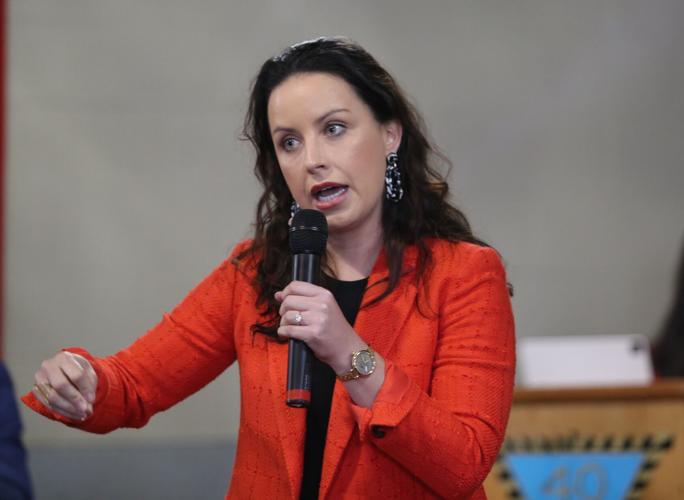 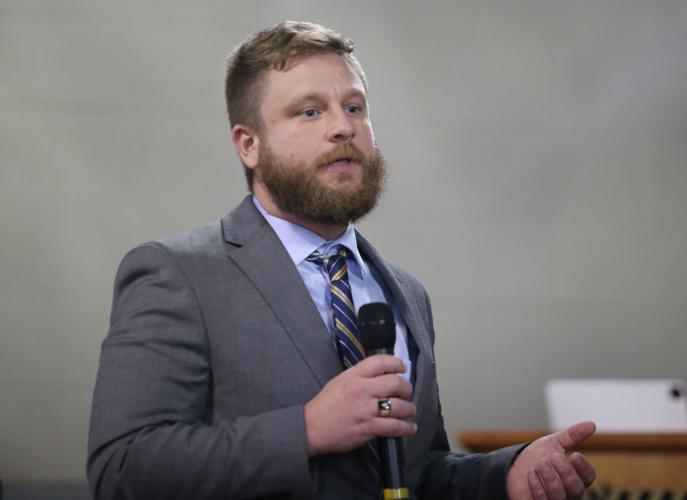 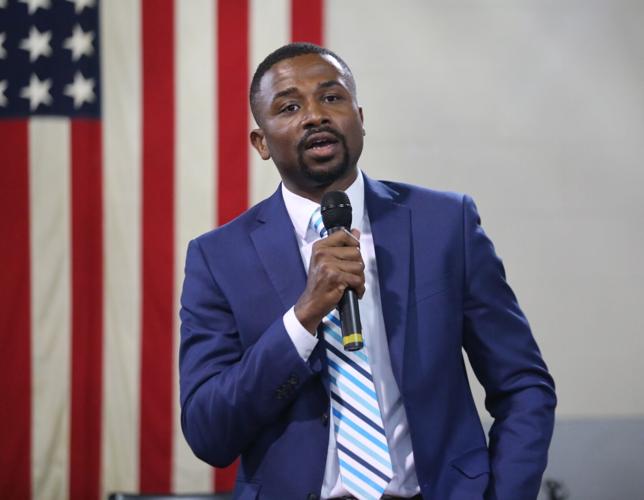 Candidates from the Indiana Republican Party were also invited to take part in the town hall, but they declined to join for “partisan reasons,” according to a Democratic Party news release.

Sceniak is running on inflation concerns, medical freedoms and creating a veteran care program across the state to allow for more money to go directly to veterans and for them to have more of a say in their health care.

Marshall told the audience he is focused on improving the foster care system, having grown up in the system as a child. He is also looking to help create economic mobility and tackle opioid and drug abuse.

Having run for the same seat two years ago, Millis is concerned with inflation and fixing what she called the broken two-party system in the country.

Roark said that after his time as an electrical engineer and in the military he has a lot to give back. He is focused on inflation and changing the age when guns can be purchased.

Wells has spent time in the military and as an attorney and pointed to her experiences as helping her be able to come from a place of empathy. She is looking to become a leader because she said Indiana needs new leaders as Hoosiers are beginning to feel left behind.

Tom McDermott, Mayor of Hammond and U.S. Senate candidate, was set to take part in the event as well but was unable to participate because of health reasons.

Each candidate was given two minutes for an introduction before spending the following two hours answering questions from the audience.

The topics included gun control, abortion rights, inflation, the legalization of marijuana, police handling in relation to the Black population, the right to privacy, climate change and voter security.

In light of the elementary school shooting in Uvalde, Texas on Tuesday, the topic of gun control weighed heavily on the panel of candidates and the audience.

When asked about their plans to combat gun violence and implement gun control, the candidates shared a variety of perspectives.

Roark said that something he thinks can get passed on the state level is changing the age required to purchase a gun from 18 to 21.

“I think that might have some good bipartisan support to get that done,” Roark said.

Marshall said that it’s now about gun safety rather than gun control. He said there needs to be conversations about how to be safe, mental health evaluations, background checks and red flag laws.

If elected he said he will try to get background checks and red flag laws implemented and stop under-the-table gun sales.

Wells said that the state can work to close the loophole of private sales of guns.

“You can have a private sale between two people of a rifle and there is no background check,” Wells said.

Sceniak said that the issue in the country is violence, and it does not matter what weapons are used.

“I believe that how we reduce violence is through opportunities, through love and through creating safe environments for Hoosiers and for our nation,” Sceniak said.

On a state level, Sceniak said providing knowledge to communities is the number one asset when talking about reducing violence. He mentioned that educating the public on gun safety and providing mental health resources will help with violence.

Millis referred to herself as a constitutionalist and said that the state is limited on what can be done at its level to make new laws that could go against the constitution’s Second Amendment.

She said that citizens need to be legally authorized to carry guns to stop people that are carrying them illegally.

Millis and Roark also said they believe that violent video games are desensitizing children. Roark said that there is something that can be done at a state level to deal with that issue.

A member of the audience asked what each candidate plans to do to protect the right of an abortion if Roe v. Wade is overturned by the Supreme Court.

Marshall said that he knows how important it is to have systems in place to support women if abortions are restricted in the state. He said that those systems do not exist.

“If that does happen, I will start working day one to get that system ready,” Marshall said.

In general, Sceniak does not believe that politicians should make medical decisions or regulations, and he said the abortion debate has been used as a way to manipulate votes. Instead, he said that they should be using this as an opportunity to have a conversation about medical rights.

Millis called herself pro-life and said that she does not believe that the federal government should dictate people’s health decisions.

Roark said that he believes women should have the right to control their own bodies and thinks that he can use his “magical powers of influence” to prevent Republicans from creating a total ban on abortion in the state.

Wells had not arrived at the town hall in time to respond to the question.

As households deal with higher prices of goods, the candidates each took two minutes to discuss the issue of inflation.

“The feds are printing money and they don’t have anything to back it up. We are so far in debt, our country’s not paying its bills, folks. They barely pay interest on the loans that they have,” Millis said.

Should he be elected, Roark said there are four things he would advocate in regard to inflation: six-month holidays for the gas tax, property tax and sales tax along with tax credits for small businesses.

He said these changes could help people manage inflation until their wages catch up to the increased prices.

While Sceniak thinks that the gas tax holiday is something that could be accomplished on a state level, he compared it to putting a bandage on a wound that is still bleeding.

“It’s only going to slow down the harm that’s affecting you and your paychecks,” Sceniak said.

What he said is really needed is for Washington to stop spending and printing money.

Marshall suggested that there be a cap to the gas tax.

“Right now Indiana has $3.9 billion surplus, and the gas tax is still going up. By the end of July, I believe so, it will have now a surplus of $6 billion because of the gas tax,” Marshall said, “We have the ability to take the harm off some people.”

He suggested that money be used to help people where they are hurting, like by making day care affordable and health care available.

Wells discussed how she can be a “Democrat voice in a sea of Republicans.” She said that because of gerrymandering, Indiana voices are not being heard so representatives don’t have to answer to them about the gas tax.

Each candidate was given 20 seconds to state a stand on the legalization of marijuana.

All of the candidates except Roark supported its legalization.

Wells and Marshall noted the disproportionate criminalization of Black and brown people in the state and nation for the use and possession of the drug.

Sceniak asked why the state was using money to jail people for non-violent crimes, such as possession of marijuana. He noted that it connects back to the broken criminal justice system he mentioned in regard to policing.

Wells also said that as a veteran she knows how the opioid epidemic has impacted the veteran community and supports marijuana use for them as well.

For Millis, she said she never understood how the government could make a plant illegal and has supported its legalization for her entire adult life.

Roark said that he does not support its legalization until there is a way to test for marijuana from a driving impairment perspective.

McDermott and Sceniak will face the other Indiana U.S. Senate candidates, including Republican Todd Young and Independents Jason Gabehart and Ellen Kizik, in the November election.

U.S. House of Representatives District 9 candidates also include Democrat Matthew Fyfe and Republican Erin Houchin, who will be on the ballot with Millis.

The Indiana State Senate District 45 race will include Marshall and Republican Chris Garten.

Roark will be opposed by Republican Ed Clere in the general election.

On Wednesday afternoon, Indiana politicians running for state and federal office met at the 40/8 Veterans Hall in New Albany as part of the In…