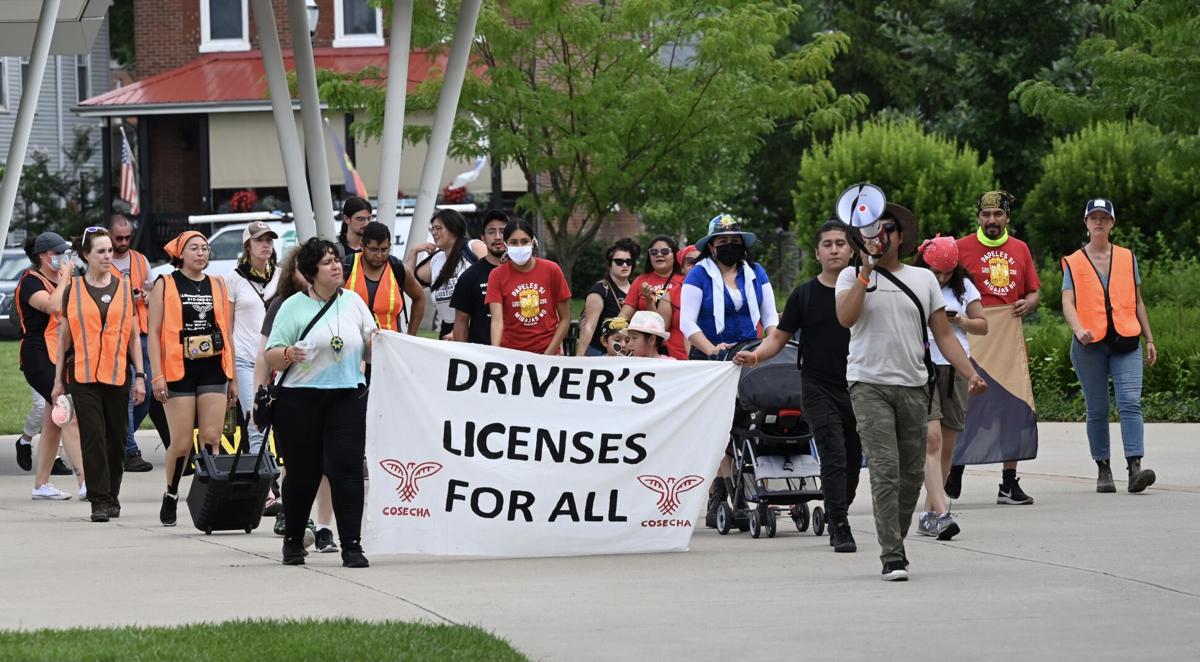 A group gathered at Big Four Station in Jeffersonville Friday to advocate in support of undocumented immigrants receiving driver licenses, which is not supported under Indiana law. The group walked from the Big Four Bridge to Beechwood Park in Clarksville. 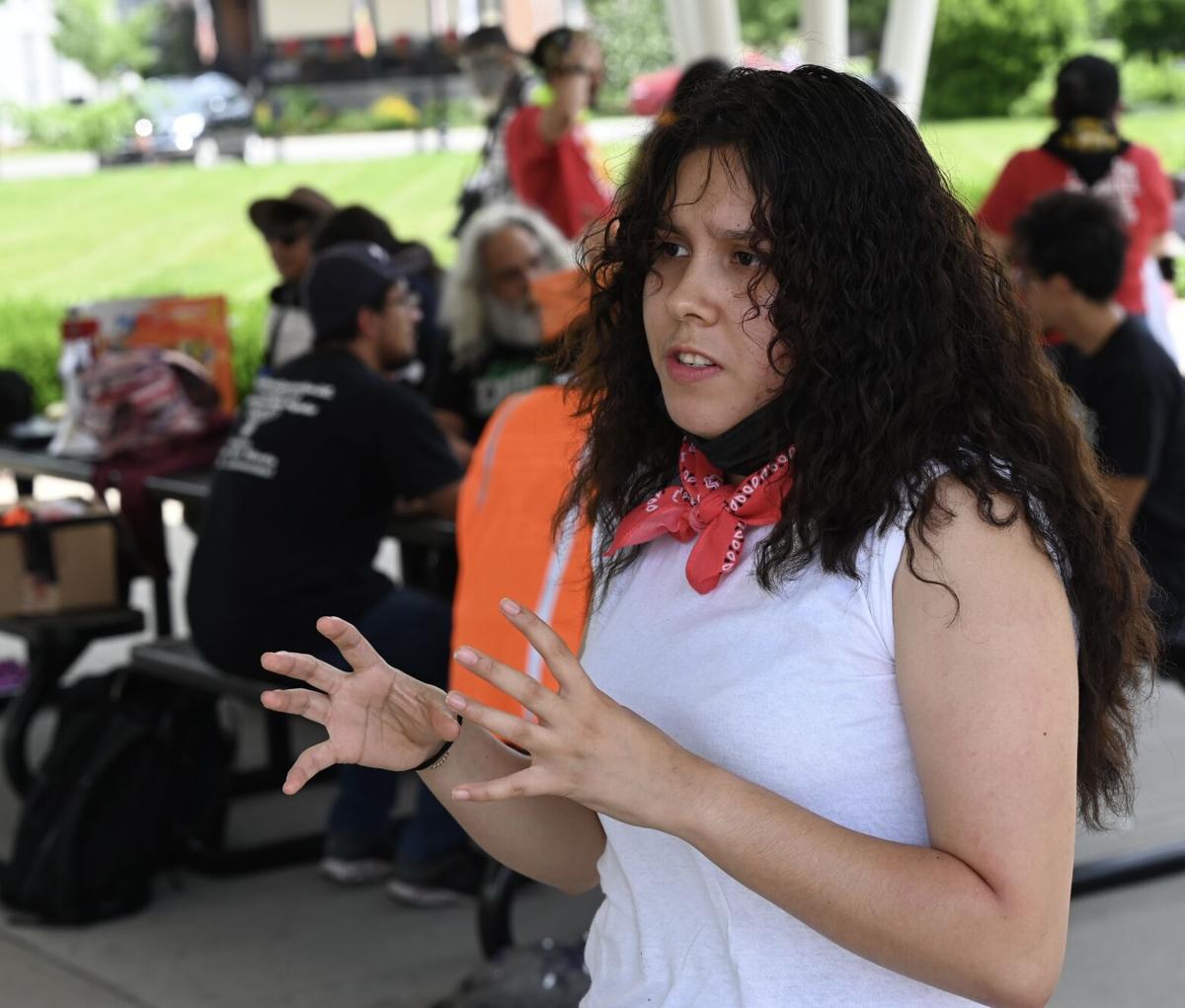 Charlestown resident Laisha Serrano was among the participants in a Friday demonstration at the Big Four Station in Jeffersonville advocating for undocumented immigrants to be eligible for driver licenses.

A group gathered at Big Four Station in Jeffersonville Friday to advocate in support of undocumented immigrants receiving driver licenses, which is not supported under Indiana law. The group walked from the Big Four Bridge to Beechwood Park in Clarksville.

Charlestown resident Laisha Serrano was among the participants in a Friday demonstration at the Big Four Station in Jeffersonville advocating for undocumented immigrants to be eligible for driver licenses.

JEFFERSONVILLE — Charlestown resident Laisha Serrano, 19, joined a demonstration this week for an issue of personal significance to her and her family.

Since she and her parents are undocumented immigrants, they are unable to receive driver licenses, an obstacle that has had a major impact in their lives.

On Friday, she joined a Southern Indiana demonstration to advocate in support of driver licenses for undocumented immigrants.

The march was organized by Cosecha Indiana, a state chapter of a national organization called Movimenta Cosecha.

The group met Friday afternoon at the Big Four Station in Jeffersonville and marched to Beechwood Park in Clarksville. The demonstration included some who have been marching throughout the state, as well as local residents who joined for the Southern Indiana march.

The seven-day, 300-mile march started Saturday with marches in East Chicago and Gary, Indiana, and will end Sunday in Indianapolis.

Cosecha is a “non-violent movement fighting for permanent protection, dignity, and respect for all undocumented immigrants,” according to the national movement’s website.

In Indiana, House Bill 1138 and Senate Bill 319 were proposed earlier this year with the goal of allowing undocumented immigrants to receive driving cards, but similar bills have failed in previous years.

Serrano said she recently participated in a Washington, D.C. march with Cosecha for International Workers’ Day, and she helped organize the Southern Indiana demonstration for this week’s Cosecha Indiana movement.

The inability to receive a license in Indiana has been a major challenge for Serrano and her family.

“Growing up, we really weren’t able to go anywhere fun, because they only wanted to drive for necessities, and that kind of sucked,” she said. “For me, I couldn’t get a license either, and I was studying to be a pilot and couldn’t even take my private pilot’s test, because you needed a license for it.”

Her family is from Mexico, and she came to the United States around age 4.

“[My parents have] been trying to legally process and all that, but it’s been hard and it’s been long, and we’re just waiting and hoping everything goes well,” she said.

Serrano had applied for the Deferred Action for Childhood Arrivals (DACA) program several years, but the program was canceled by President Donald Trump’s administration the week she submitted her application.

She applied again in November as the program has opened back up, but she is still waiting, she said.

Serrano said it “emotionally affected her knowing she could not continue” studying to become a pilot, and not being able to drive has restricted what she is able to do.

On Friday, she was at the Cosecha Indiana demonstration to support a cause she believes in, she said.

“Hopefully that can also encourage other people to support a cause that I think is very important,” she said.

Wendy Catalan Ruano, 24, is a field organizer with Cosecha Indiana, and she has been traveling throughout the state this week with the movement.

Ruano said she and other demonstrators were there “raising our voices for our parents, our neighbors and our community.” She said the immigrant leaders at the march “identify with the working class” and the “classes holding up this economy especially during the pandemic.”

Her family is from Mexico; she came when she was only 9 months old.

Ruano is a DACA recipient, and she was able to receive a driver license, but she said “DACA is just a Band-Aid.”

“I have DACA, and that’s what’s been able to give me a level of protection for me and my family, but my parents are fully undocumented,” she said.

Her father was pulled over without a driver license in 2011 and arrested, and he went through immigration proceedings that lasted about six years, Ruano said. He was detained for nine months in 2017 and deported in 2018.