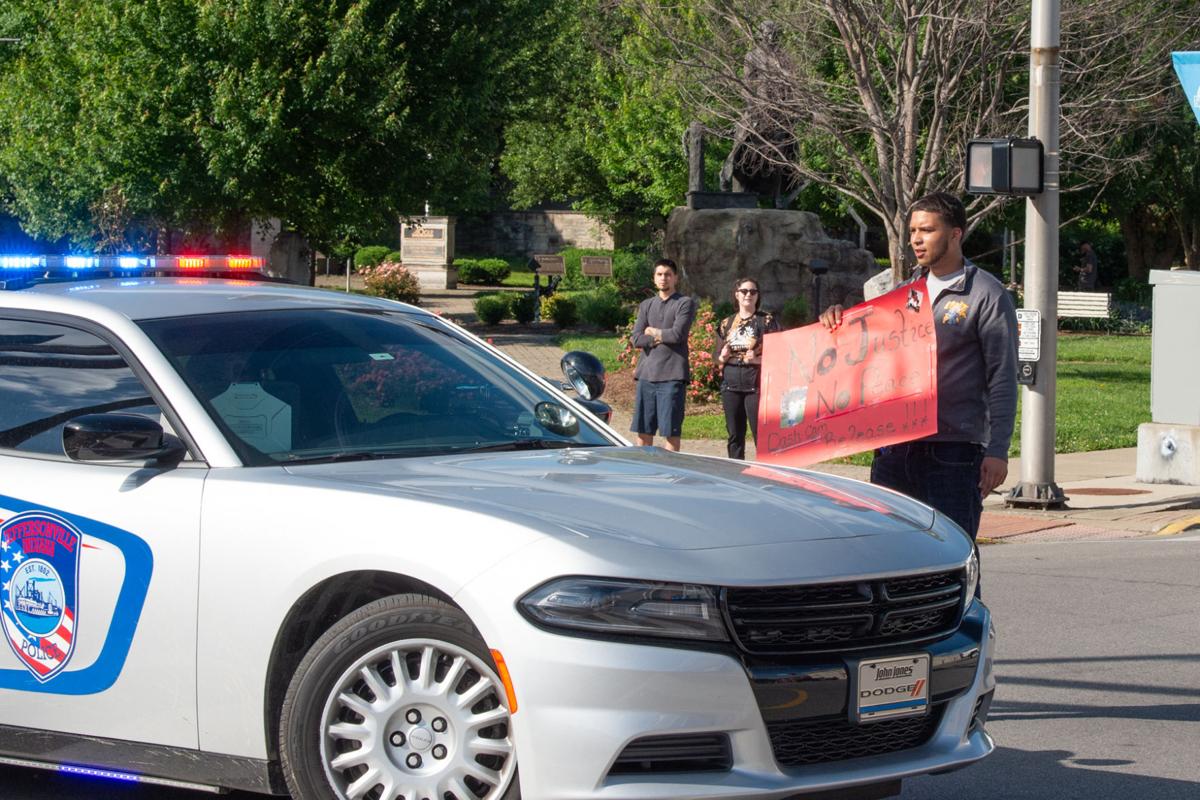 A protester stands near a Jeffersonville Police cruiser during a May 31st protest in the city. 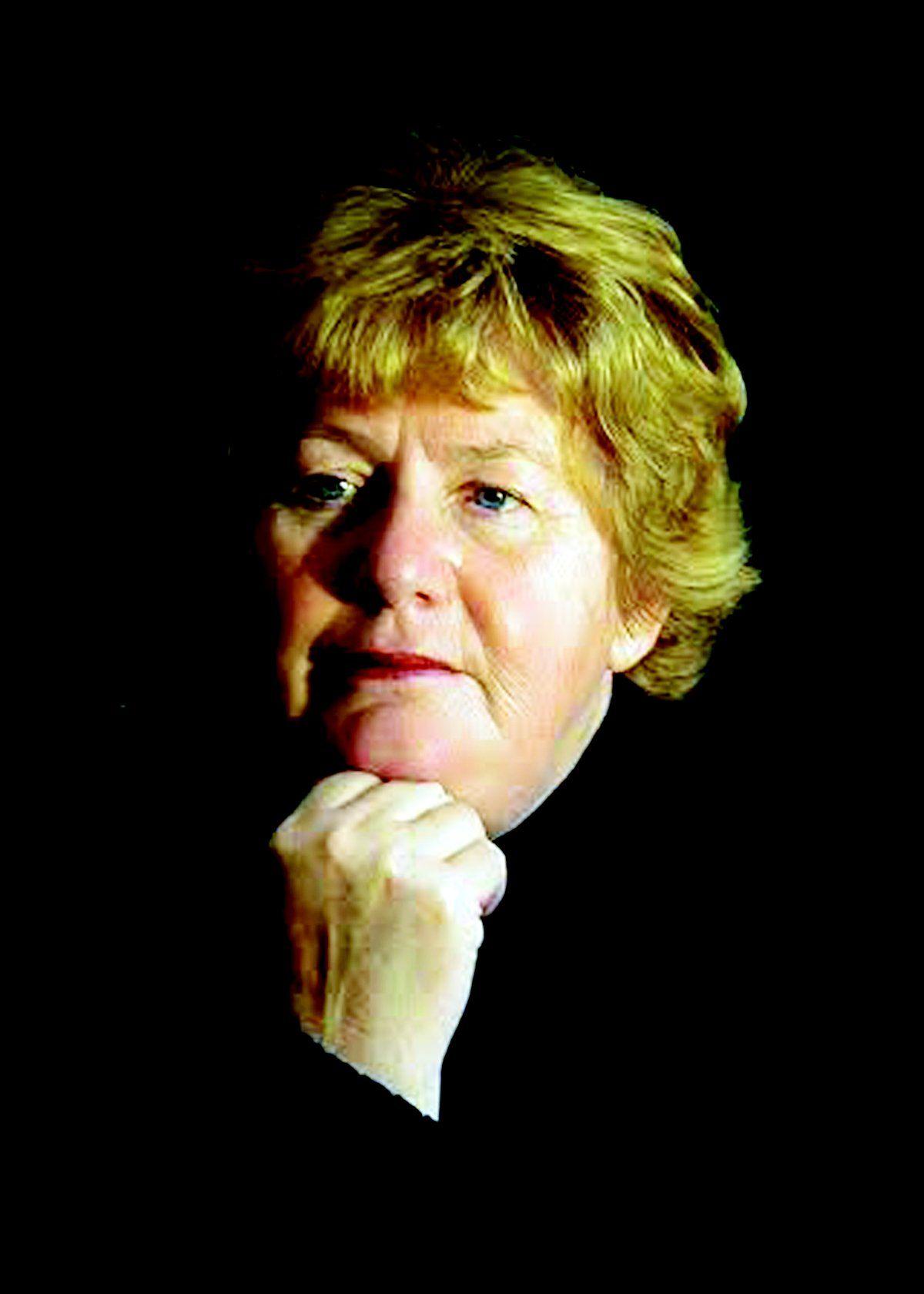 Sunday, July 12, 2020, was a different kind of day in Jeffersonville. As a police officer it had to be a pretty scary day. In their honor a group of well-intentioned citizens responded to a woman from another community reaching out to honor those in Blue. A counter statement to all those speaking of police atrocities across the nation. The effort locally was to honor policemen and women; unfortunately, those from outside the community had a different agenda and that was abundantly clear. So many people came, about 200, to at our beautiful park, many with huge guns, some semiautomatic weapons, across their chests.

They came to protect the Back the Blue folks from the Black Lives Matters folks. Both the Black and the Blue groups were in more danger with them present. I didn’t go to the rally. I listened to several good friends from local law enforcement, who advised against it, and I sat on the porch of a friend living across from the park. I live streamed Miguel Hampton as he was with the Black Lives Matters group and was actively working to show the community what he was witnessing.

I watched as three heavily armed men, with their guns out front, hands on triggers, challenged the BLM folks and tried to bait them. It wasn’t pretty. One of the women behind the armed men called one of the BLM women a profanity; she had not been doing anything to deserve it. Miguel asked why? They then proceeded to tell the BLM folks they were there to protect and make sure that the Back the Blue folks would be able to have their rally in peace. Their position was not peaceful.

I felt so sorry for the police community. Something designed to show respect for them was causing them an awful lot of work and anxiety. The police were positioned to serve and protect both groups gathering and the armed group as well. They did a good job of keeping them separate but they had to work twice as hard as usual because tempers were high. It was scary to watch. As a person who has protested and marched on justice issues for 40 years, I can tell you I have never seen that many weapons in one place at one time before for such a small gathering. It was frightening to see and I was afraid for my friends and neighbors. I was afraid for the police force.

As a person who supports the Black Lives Matter campaign and who supports local law enforcement, I feel like I am being asked to choose who to support, but I refuse. Actually, most of the police officers I know (and I know a few) have always thanked us for stepping up. This is a justice issue. Police officers don’t want what has happened either. George Floyd’s death was as appalling to all of the officers I know and many across this nation. Most people go into law enforcement to protect and serve, not to intimidate and scare. But, just like in every group of people in every walk of life, there are exceptions.

I used to say the Peter Principle was alive and well. Eighty percent of the people are good and solid. You need to appreciate that because the 20 percent who are not so good and solid can create some chaos. It works that way in life. We cannot defund the police; we need police protection. Black Lives Matters knows that, but we can develop new methods that can take the pressure off the police so they can do their jobs and not the work of social workers, mental health experts, domestic violence specialists, or drug recovery experts. My Lord, we expect a lot from the people wearing blue.

Does that mean there aren’t problems? No. Historically Police Departments were to help and assist but as crime, gangs, guns, drugs, and every other ill in a community grew, they had to adapt. My son wanted to be a police officer. I prayed he would change his mind because I feared for him. And then several of my friends children became local law enforcement. There isn’t a day I don’t worry about them. It is easy to look at a group and pin your anger there, something the Black and Blue communities have in common. What we have to do is take the onus off the Black community and the Blue community and put it squarely on the shoulders on which it belongs — OURS.

We allowed things to go backward after the 1960s and ‘70s and we didn’t continue the discussions and the changes proposed then. We fought progress because it was hard. And here we are today. In an even harder place. Still not understanding each other, still not listening to each other, still ready to hate for hate’s sake, and still not clear on what to do. It has to stop.

If you do nothing else but get mad over these words, do one thing for me, read the Book of Isiah. If you are truly Christian you cannot misread what is written. Accept each other, pay a man a fair wage, take care of the poor and the homeless, heal the sick, and be humble. We talk so much of being a Christian nation, yet we have taken Christ out of the equation. I don’t speak for God, but I cannot imagine that he isn’t pretty upset with the way we’ve been handling things.

So, thank those who serve and protect you. Forgive those who trespass against you or injure you in any way, and do what we were told to do — love each other as He loved us.

Barbara Anderson is a local human rights activist. Contact her at barbanderson_1@yahoo.com.

As a person who supports the Black Lives Matter campaign and who supports local law enforcement, I feel like I am being asked to choose who to support, but I refuse.