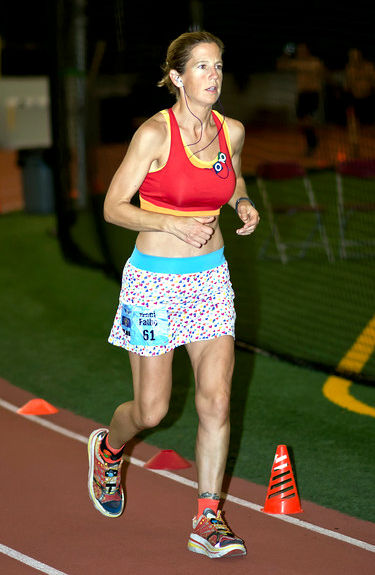 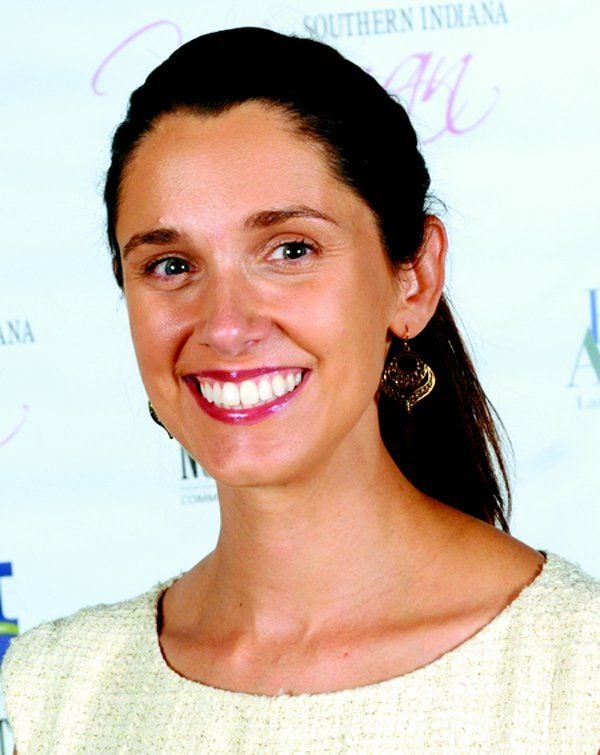 When Traci Falbo walked in to the coffee shop, I expected her to be wearing a cape. If not that, the 42-year-old mom of two deserved at the very least to be adorned in those cool golden cuffs that dazzle Wonder Woman’s wrist or The Flash’s lightening bolt spandex suit.

Instead she wore the disguise of a mere mortal. Clark Kent has his glasses. Falbo has the comfortable shirt and shorts she wears as a pediatric physical therapist, where she helps kids to recover from all sorts of injuries and illnesses.

Her powers, you see, span the hero gamut.

It’s easy to think of Falbo as superhuman after her amazing accomplishment at Six Days in the Dome, an endurance event held two weeks ago in Anchorage, Alaska. Falbo ran 242.09 miles in 48 hours, crushing not only the U.S. women’s records for any surface or venue for that time period, but the 48-hour women’s world indoor record as well.

“I’ve run the furthest in that time by an American woman ever,” she said. “I don’t know if it has really settled in. It seems surreal. It was a goal, and I went after it.”

This wasn’t Falbo’s first lap around the track. Ten years ago, she started running to become healthier. Eighty pounds lighter and more than 95 marathons and 20-plus ultras later, the Charlestown resident has done much more than that. She’s become an endurance legend.

To give you some perspective, add 20 more miles to her record run and Falbo could have darted all the way to St. Louis from here in just two days.

Like The Flash, her pace was incredible. Figuring in bathroom and rest breaks and approximately 30 minutes worth of naps, Falbo generally maintained around an 11-minute mile. The second half of the second day of her run, she had negative splits, meaning she ran faster at the end of her day than at the beginning. Her final two of the 242 miles, she sped forward at an 8-minute pace.

Yeah, that’s down right unimaginable. My quads scream just thinking about it.

“How do you pick it up at an end of a 48-hour? I have no idea. I have no idea,” Falbo said. “What kept me going is the motivation that I wanted to get a record and do the best I could.

“It’s though at times. You feel crappy.”

Pain may be some indication that Falbo is indeed human and not immortal. After a few hours of running, blisters formed on her feet. During the second day, she experienced periods of feeling dizzy and had some stomach issues. At her husband Mike Falbo’s request, she laid down for a half an hour. When she stood again, she barely could move.

Mike, her constant crew and greatest supporter, knew what to say. He gently reminded her she had agreed to take the rest and that she was there to break a record. So start walking, he urged, and do just that.

At the end of the race, Falbo collapsed in Mike’s arms, exceeding her original goal by more than nine miles. Her feet the following days “blew up like balloons” as a result of her dedication, the veins popping out from her skin in an act of defiance.

Even after this great feat, she keeps on going. Blisters and bagging those world and American records won’t stop her thirst. Endurance running, she said, is what she does best.

Next up? The World Championships in Torino, Italy, next year where she’ll be competing again as a member of the U.S. team. Personal records always need shattering, too. Although Falbo sometimes uses marathons as “training runs,” she’d love to conquer the three-hour barrier. In addition, she hopes to take two hours off her 100-mile time and accomplish one in under 15 hours.

For her perseverance this time around, she received a special native Alaskan knife and cutting board. The knife resembles a weapon used by Klingons in the Star Trek universe, a gift worthy of the budding superhero.

Above all, Falbo gave the rest of us a reward that knowing humans can achieve anything with hard work and a healthy mindset. Life, she said, is what you make it. Believe in yourself and dastardly villains, tall buildings and unthinkable goals can be vanquished one blistery step at a time.

“Ten years ago I was a severely overweight person and now I’ve got an American record,” Falbo said. “I mean, that’s insane.”

— Amanda Beam is a Floyd County resident and Jeffersonville native. Contact her by email at adbeam47@aol.com