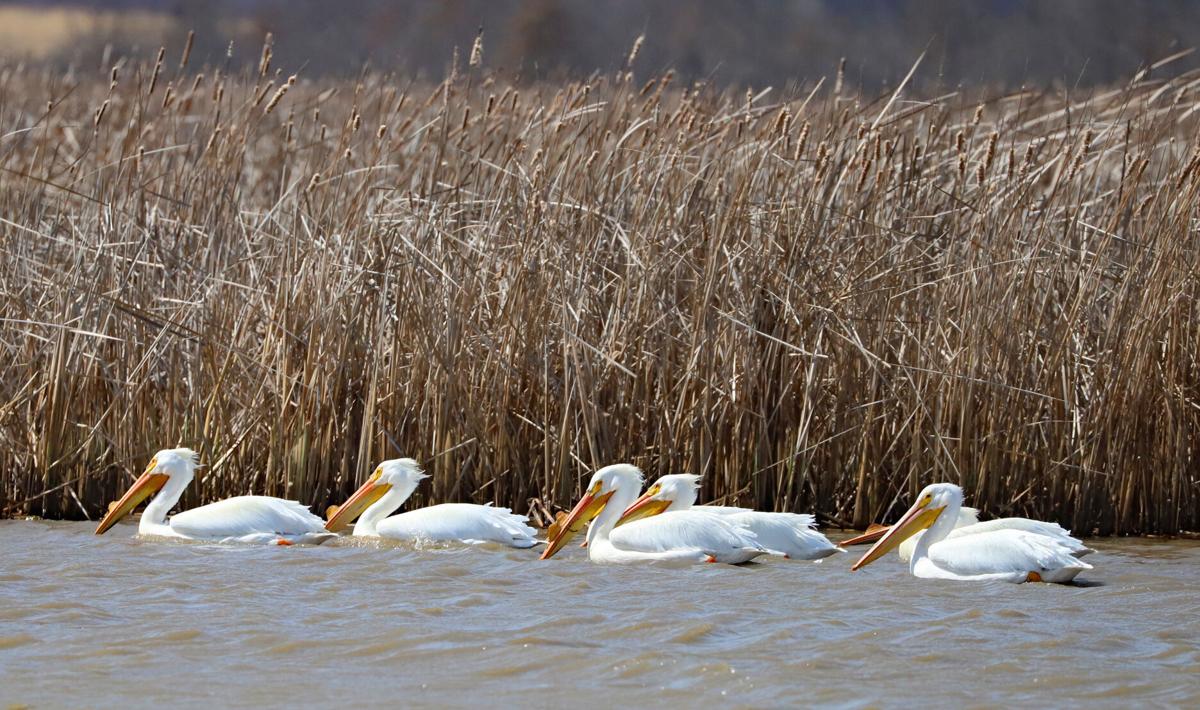 A line of American White Pelicans troll the waters of a Goose Pond wetlands in late March.

A line of American White Pelicans troll the waters of a Goose Pond wetlands in late March.

My two favorite hiking mates and I wandered a grassy Goose Pond levee a few weeks ago, all the while eyeing a flock of American white pelicans as they milled about on the wind-blown chop.

It was a warm day — nearly hot — as we exposed the white skin of our arms and necks to the sun and endured a steady southern gale that kept us holding onto our hats with one hand while managing binoculars and cameras with the other. In all, we saw Canada geese and pied-bill grebes, blue-winged teals and American coots, a few utility line-sitting kestrels and the usual collection of crows, woodpeckers and sparrows. Despite seeing plenty of wood ticks as well, it was a good day to simply be outside, and the strong wind assured us that we would hear that which was only quite close and immediate.

Although we drove the hour or so south to Greene County in hopes of seeing a few of the pelicans still straggling behind the big flocks that have already migrated north and west to breed, I hoped, perhaps most of all, to see a personal favorite bird, the big Northern harriers that hunt the wild grass prairies there. Despite spotting a few of them hovering over the swaying grasses well out of camera range, we were probably most entertained — awed, actually — by the odd-looking pelicans that have — undoubtedly, because of clean water and habitat preservation legislation — been on the increase in this country since the 1970s.

American Pelicans are one of the largest birds in North America. To put it in perspective, their wingspans often exceed those of bald eagles, and they can easily weigh well over 30 pounds. The birds tend to feed communally, and, if those watching are lucky enough, pelicans will take off en masse to form ponderous and slow-moving fleets that resemble white-winged heavy bombers turning to line-up for a sortie.

It’s believed pelicans work together to forage for food, sighting then pushing fish toward shallower water, so they can be caught more easily. They do not dive for their prey, but rather use their huge bills to trawl while staying on the surface. Often considered a threat to commercial and recreational fisherman, pelicans actually feed on “rough” fish, crayfish, even salamanders.

As we watched, a flock of no fewer than several hundred pelicans trolled about in the rain-fed brown water between marsh-like stands of cattails and reed grasses. On rare occasion, a loner would leave the group and fly off, but for the most part, they stayed together, a few grunts their only real sound, even as we came to within 50 or 60 yards of them.

According to my birding friend, Dr. Peter Scott, the pelicans should mostly be gone by late April, many already nesting on fresh water lakes in the far northern Great Plains and west-central Canada; they’ll begin to migrate back to us (over the last decade we have become part of the eastern border of their annual path) by late July. They then will head farther south, although Scott suggests that growing populations may mean that some will stay this far north in the winter.

Another thing we noticed was how quickly time passed for us. We spent the better part of a day at Goose Pond, often walking back to our family wagon to drive to another area a few gravel roads away. We heard virtually no man-made noises and were open to discovery like grade-schoolers on a field trip: a pile of owl feathers left in the greening grass; a painted turtle sunning at the edge of pond; a muskrat that swam toward us unaware that we stood on the bank of a pond; the rhythmic lap of water on the sides of a wooden footbridge…

Today, we observe Earth Day for the 51st time. Originally promoted by San Francisco activist John McConnell and Wisconsin Senator Gaylord Nelson, Earth Day itself became a movement that led President Richard Nixon to create the Environmental Protection Agency (arguably his greatest achievement), which in turn led to the passage of such monumental pieces of legislation as the Clean Air Act, the Clean Water Act, and the Endangered Species Act. I don’t feel that my daughter and my wife and I would have been standing in the midst of over 9,000 acres of wetlands at Goose Pond watching pelicans had that legislation never happened.

It’s important that we reinvest ourselves in the places where we live. We can do that by buying environmentally friendlier products, by picking up the trash others have left behind, by merely walking in and appreciating the woods, and, of course, by urging our own state lawmakers to act responsibly in supporting ecologically-responsible legislation, not that which benefits a vested few at the expense of our land and water.

We can plant trees, repair dripping faucets, take the time to recycle, turn down the volume, consolidate trips in the car, a myriad of things that will matter plenty in the long run. But perhaps above all, developing a sense of appreciation for the natural world, and our responsible place in it, drives all the rest.

It came to me that day at Goose Pond, as it has many times before, that noise makes life harder for us, that we all need to escape it and hear and see only that which nature provides. The pelicans were proof of that.