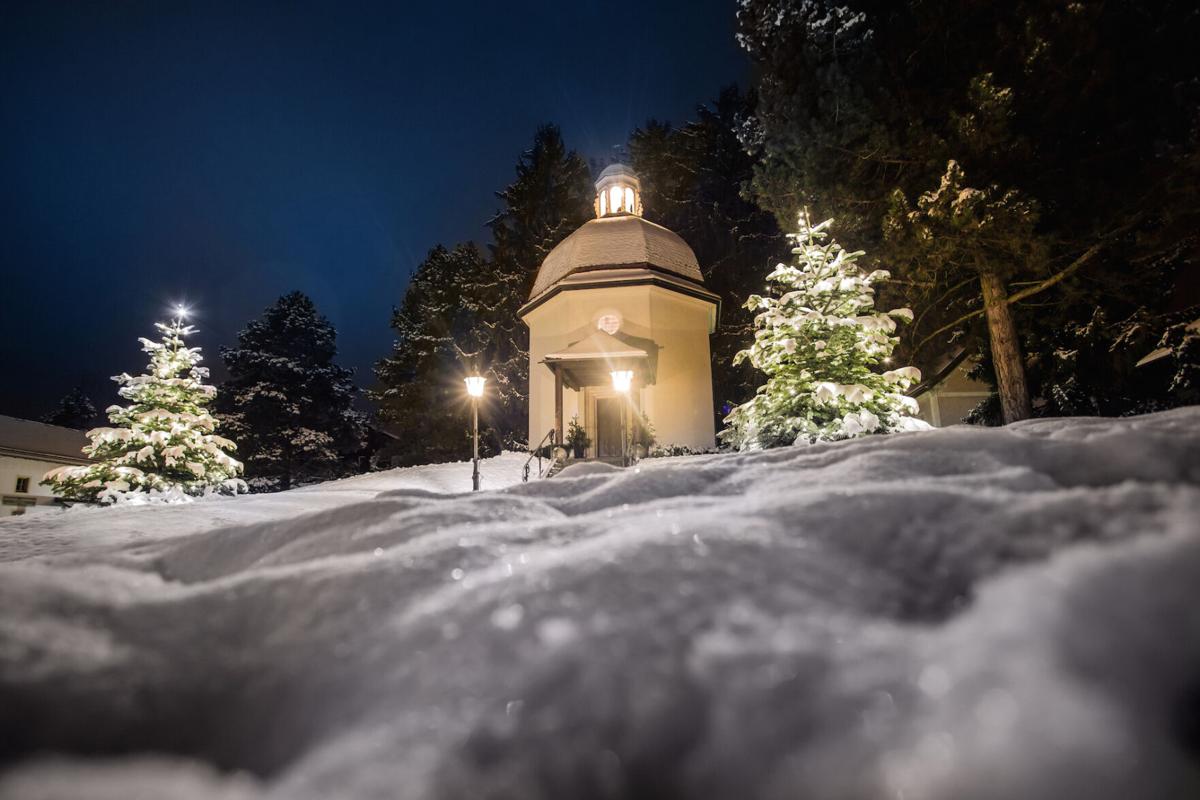 The “Silent Night Chapel,” located in Oberndorf bei Salzburg in Austria, stands on the site of St. Nicholas Church, where Joseph Mohr and Franz Gruber performed “Silent Night” for the first time on Christmas Eve, 1818. 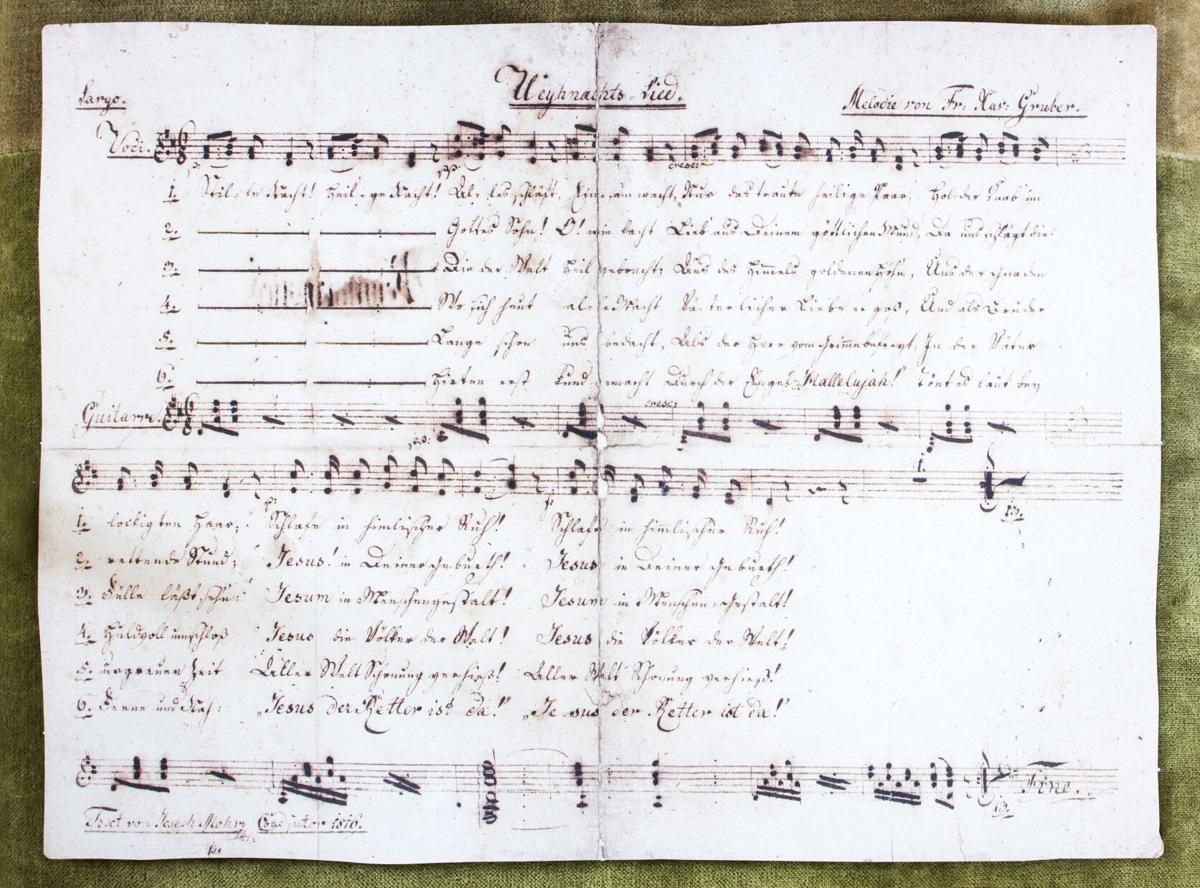 This is a photo of the score of “Silent Night,” as credited to Franz Gruber.

The “Silent Night Chapel,” located in Oberndorf bei Salzburg in Austria, stands on the site of St. Nicholas Church, where Joseph Mohr and Franz Gruber performed “Silent Night” for the first time on Christmas Eve, 1818.

This is a photo of the score of “Silent Night,” as credited to Franz Gruber.

Like most people, nostalgic or not, I like Christmas music. There are few things I enjoy more than sitting in my writing space on a wintry December night, a cup of steaming coffee nearby, a comforting Christmas classic playing in the background, the glimmer of colored lights at the eaves.

This year has been a difficult one for just about everybody, and although I dearly treasure Bing or Nat, Perry or Rosemary crooning “I’ll Be Home for Christmas” or my personal favorite, “Have Yourself a Merry Little Christmas” (best if Judy Garland sings it), I feel good that during the holidays a few songs of faith end up on digital playlists and traditional radios and even old record players.

As expected, most Christmas hymns had their origins steeped in the church, although a few were considered both militant and secular. For instance, much has been written about “O Holy Night,” which began as a French poem by Placide Cappeau, a wine merchant from the south of France.

In 1843, Cappeau wrote a poem, “Minuit Chretians,” in celebration of repaired stained glass in the church of his hometown, Roquemaure. Cappeau’s poem, like his politics, was said to be “leftist,” and critics read into his verse a veiled criticism of the French government and the powerfully wealthy, both which faced bloody revolution just a few years later.

In that same year (some say it was 1847), Cappeau’s poem was set to music by Adolphe Adam, a composer of operas. Adam, believed to be Jewish (doubtful) and an atheist (possible), was an acquaintance of Cappeau; he was almost immediately labeled as a “socialist drunk” by critics. What Adam thought of the uproar over his composition was never known, for according to a piece by Benjamin Ivry in “America” magazine a year ago, the memoirs the composer wrote a little over a decade later have no mention of the tune at all.

Instead of searching online for additional stories, I turned to an older source: a yellowed library book I picked up years ago, Cecilia Rudin’s “Stories of the Hymns We Love,” first published in Chicago in 1934. From that book, I learned that until Martin Luther led the Reformation, congregational singing in churches was uncommon. By the mid-1520s, the most popular Protestant hymnal in Europe had only eight hymns, four of them written by Luther, who believed that music could “…make men forget all wrath.”

Born the son of a poor German miner, Luther’s attachment to music came with a beautiful singing voice; in fact, he often sang with friends as a means to raise money for the poor. By 1529, his “A Mighty Fortress is Our God” was wildly popular, and the great reformer was, as Rudin says, seen as the “the father of congregational singing,” which was growing more popular each year. Although Rudin gives Luther credit for writing “Away in a Manger,” referring to it as a “lovely cradle song” written in 1530 for his young son, Hans, he didn’t.

In fact, “Away in a Manger” was probably composed in the late 19th century in the United States, included in a popular songbook published by James Murray in 1887 and given the title, “Luther’s Cradle Hymn.” It has been speculated that Murray may have written it himself, but the first two verses of the song were first published as a poem in 1885 in “The Little Children’s Book,” while the tune was probably composed by J.E. Clark. A third verse was added to the song when it was revised and printed by Charles Hutchinson Gabriel in 1892, and although yet another man — Dr. John McFarland — has been long credited with it, Gabriel probably wrote it himself. So, the romantic image of German mothers singing the song to their children in the 16th century had its origin in 19th century America.

Another revered Christian hymn is “Silent Night, Holy Night,” and it too has an interesting origin. Written first as a poem by an Austrian priest named Joseph Mohr in 1816, the song was nearly lost to the world before it was ever found. The town that Mohr ministered to lay high in the Tyrolean Alps and, as legend has it, an evening walk and the snow-filled silence of the town inspired him to write a poem.

Mohr eventually took his work to his friend, Franz Gruber, the village schoolmaster and church organist, who composed in a single day the simple but beautiful tune we have come to know; the two men sang it together at a Christmas Eve mass at St. Nicholas Church in 1818.

“Stille Nacht” lay on Gruber’s desk for most of the next year, but in November 1819, the church’s organ needed repairs. When the repairman was finished, he asked Gruber to play something, and the young organist played his Christmas song from memory. Charmed by the tune, the repairman took a copy across the mountains to another village, and its use slowly spread. However, it wasn’t until 1842 before “Stille Nacht” was printed, first as “The Tyrolese Song.” By 1854, Emperor Frederick Wilhelm IV, who had come to love it so much, ordered “Silent Night” to be given first place in all Christmas programs from that time on.

A half-century later, German and British soldiers collectively sang “Stille Nacht” from their trenches during the now-famous “Christmas Truce of 1914” during the Great War. As Private Albert Moren of the Second Queens Regiment remembered it, “Silent Night” came floating across “No Man’s Land” from the German lines: “I shall never forget it. It was one of the highlights of my life. I thought, what a beautiful tune.”

On the winter solstice Monday, two giant planets, Jupiter and Saturn, were aligned so closely — despite still being over 400 million miles apart — that to some viewers it may have appeared as a single elongated and bright star. The two haven’t been this close in the sky for 800 years, and not this easily seen since Galileo was probably watching nearly 400 years later.

As the sun faded on the shortest day of the year, we were able to see this once-in-a-lifetime event, just as we have struggled with another rarity in the form of a deadly virus. Add with it the conflict of a disputed election, with the universal roar of unhappiness and despair that seems to be common, and perhaps the simple songs of Christmas and two normally distant planets coming together can remind us that we can, at least for a while, “forget all wrath.”

Mike Lunsford can be reached at hickory913@gmail.com; webpage is at www.mikelunsford.com. Mike’s books are available at many local stores and at Amazon.com.