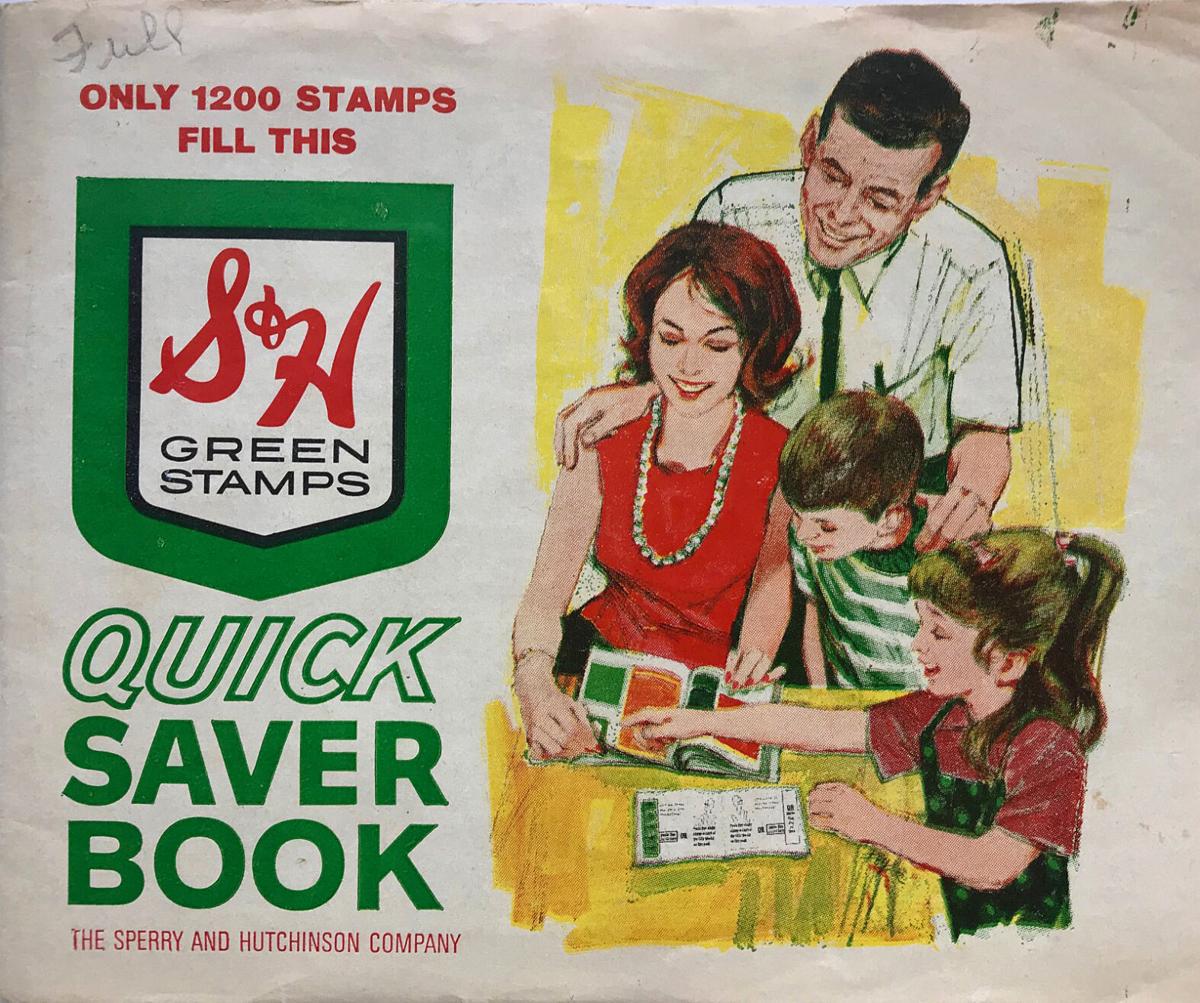 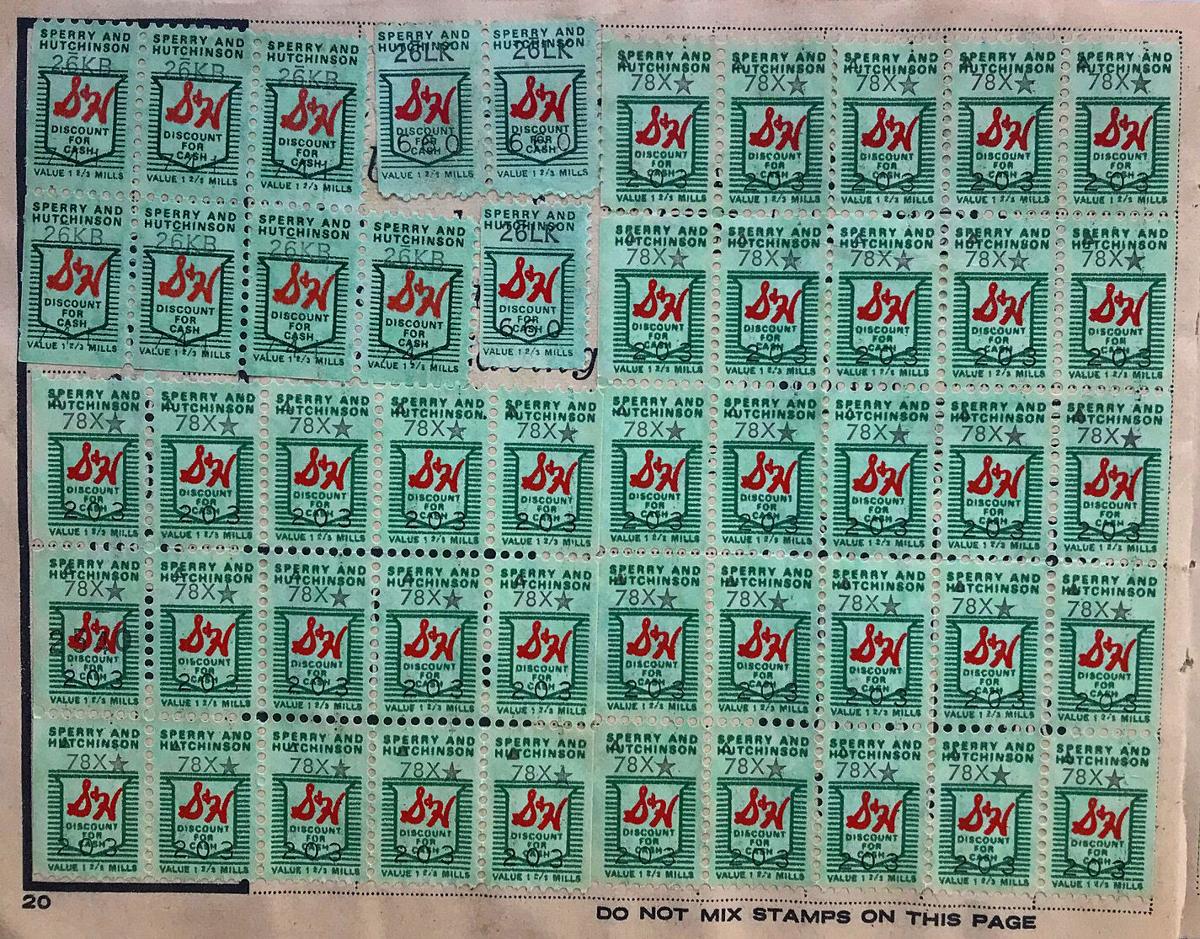 I recently thumbed through a book of memories: a 1956 S&H Green Stamps catalog my wife unearthed in her mom’s treasure trove of an attic. It didn’t take looking at two pages of the thing to have me recalling the half-century-old aftertaste of unpalatable glue and the roar of the mint green upright hair dryer that my sister brought home after a particularly gratifying visit to the library-quiet showroom that sat near the corner of Eighth and Ohio streets in Terre Haute.

For decades, S&H Green Stamps dominated the redeemable bonus stamp market in America. Most popular from the late 1950s into the ‘70s, it has been estimated that nearly 80% of all American households saved, then exchanged stamps at one of the 600 redemption centers located across the country. By the mid-1960s, the S&H “Ideabook” had grown to a hefty 178 pages, and stamp savers could buy anything from blenders to bras, bedspreads to “Big Boy” grills.

Yet, for my sister, it was the hair dryer that proved memorable. “Well, it sure beat the one Grandma gave to us. Hers had a cap with a tube that ran down the back, and it scalded your neck. The cap left red ridges on my forehead that seemed to be there for days. The new dryer may have taken seven or eight books of stamps — a lot of licking — but it was worth it,” she told me.

S&H were actually people: Thomas Sperry and Shelly Byron Hutcheson, who founded their company in 1896. Sperry died in 1913, but Hutcheson — who lived to be 97 — saw it explode in popularity during the Great Depression. By far the most successful of the redeemable stamp companies, S&H sold the stamps — three times more than were produced by the U.S. Postal Service — along with the requisite “Quick Save” booklets, to retailers, who then doled them out to customers after sales. It was likely that if you or your parents saved the stamps, you got them at local gas stations and supermarkets.

Friend John Camp recalled: “I remember my mother, while visiting another town, driving from gas station to gas station till she finally found one with Green Stamps. Her purchasing options, from groceries to furniture, were based on Green Stamps.”

My mom, as frugal as they came, religiously asked for the stamps, too, and would shop few places that didn’t offer them. If I recall, we got Green Stamps at Al’s Texaco, which sat at the end of the county line road, and even at tiny Bonacorsi’s Grocery in Clinton, where our purchases were brought out to our car, even if we parked a few blocks up Main Street near G.C. Murphy’s five-and-dime.

A lot of my readers must have had the same fond Green Stamp experiences. When I mentioned I wanted to do this story, Tom and Terry Webster offered a small stack of the old booklets to me, and with them came a re-learned lesson in perseverance, patience and thriftiness.

The small S&H stamps were worth just a single point, and a full booklet page took 50 of them. If you spent enough, it was possible to earn the 10-point stamps; it took only five of those to fill each of the booklet’s 24 pages. So, a single book — often a long time in filling — was worth 1,200 points. In 1956, a set of four Cal-Dak metal TV tables cost four books of stamps, but, after all, they were “stain resistant.” A 1975 catalog I came across listed a Joy transistor radio — with “compact design” — at 10 booklets.

Friend Cheri Peacock told me, “We used Green Stamps for end tables and lamps when we got married in 1972. We still have the end tables…” Sue Snedeker McCallum said, “My mom loved to get them and save the books. I would say she was a bit fanatical about them, with four children, and she was a good saver in general for the family. She saved the yellow ones (probably Top Value stamps), too.”

Other friends had fond memories of the stamps, including Joyce Mattick, who belonged to a youth group at Lyford Bible Church that diligently saved stamps and payed for most of a church organ. Cathy Baker told me her mother-in-law bought her an entire set of dishes (24 of each item) with Green Stamps, and she sold the last of them at a yard sale in 2013; she’s since seen the dishes in antique shops. Marge Piguet added, “Through high school and college I was saving Green Stamps for one particular thing. There’s a piece of furniture in my living room I especially cherish. Many babies and grandbabies have been rocked to sleep in my Colonial rocker. Yes, I purchased it with Green Stamps quite a while ago.”

A few friends told extended stories just at the mention of Green Stamps, which surely are reminders of simpler times, perhaps simpler people. Kristi Johnson related one such tale: “When my parents moved in 1974, their new neighbors, Wilmer and Maxine Williamson, gave them two books of Green Stamps. It was their way of welcoming them to the neighborhood. My parents used the stamps to buy a few items for their home, including a heating pad my mother still uses. Maxine lived to be 100 years old… One day, Wilmer saw me wreck my bike and run into the house in tears… When I came back outside, I found my bicycle complete with a new steering wheel! What sweet memories.”

Recessions in the early ‘70s led to the eventual decline of Green Stamps. The company was sold for the first time in 1981, and eventually came into the hands of Thomas Sperry’s great-grandson, who attempted to turn the program into an online venture. The stamps remained redeemable — at $1.20 a book — through S&H Greenpoints for a few more years, but now are no more than collectors’ items, stowed away in closets and attics, and, of course, in our fond memories.

Contact Mike Lunsford at hickory913@gmail.com; his website is at www.mikelunsford.com. Mike’s newest book, “This Old World,” is available at Amazon.com.