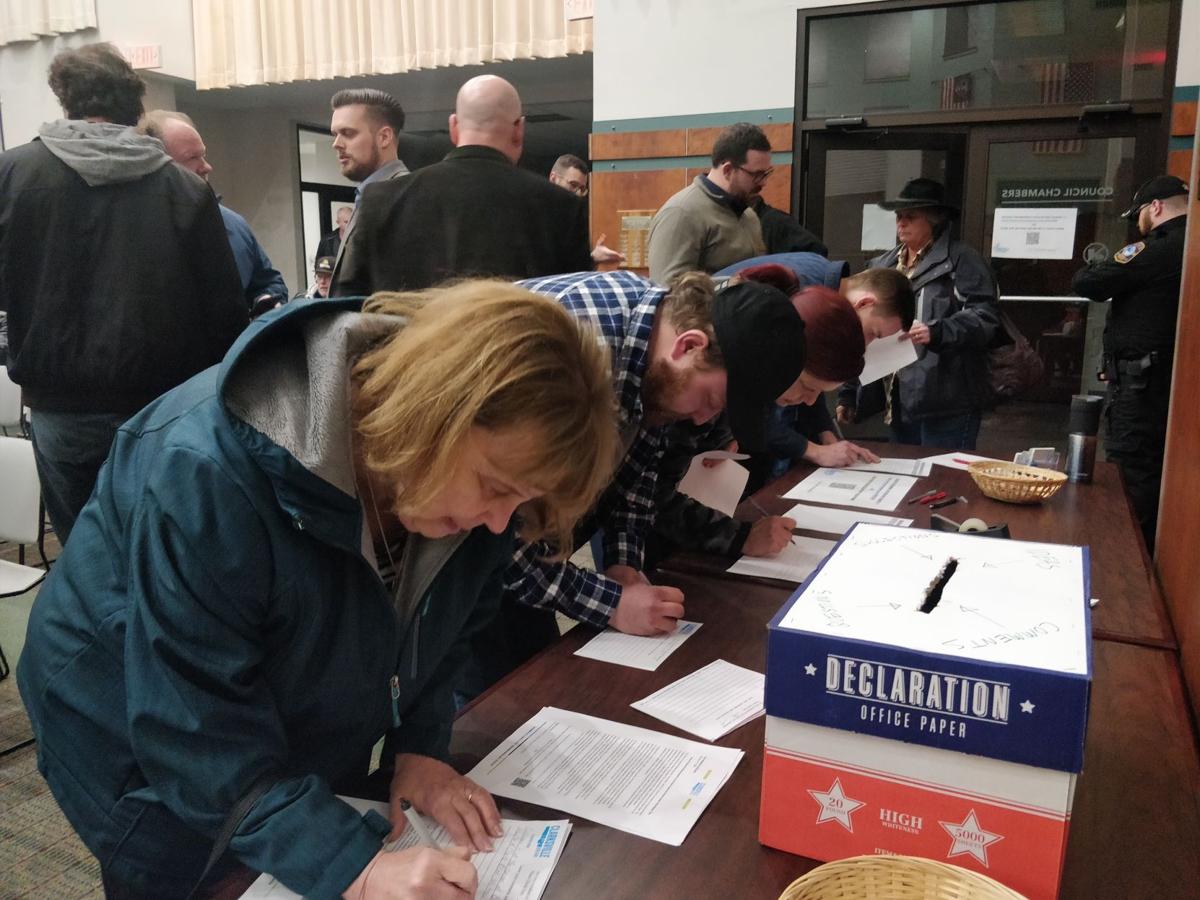 Linda Harris gives her input on the recently approved Brown’s Station Way Master Plan at a meeting in Clarksville Thursday. 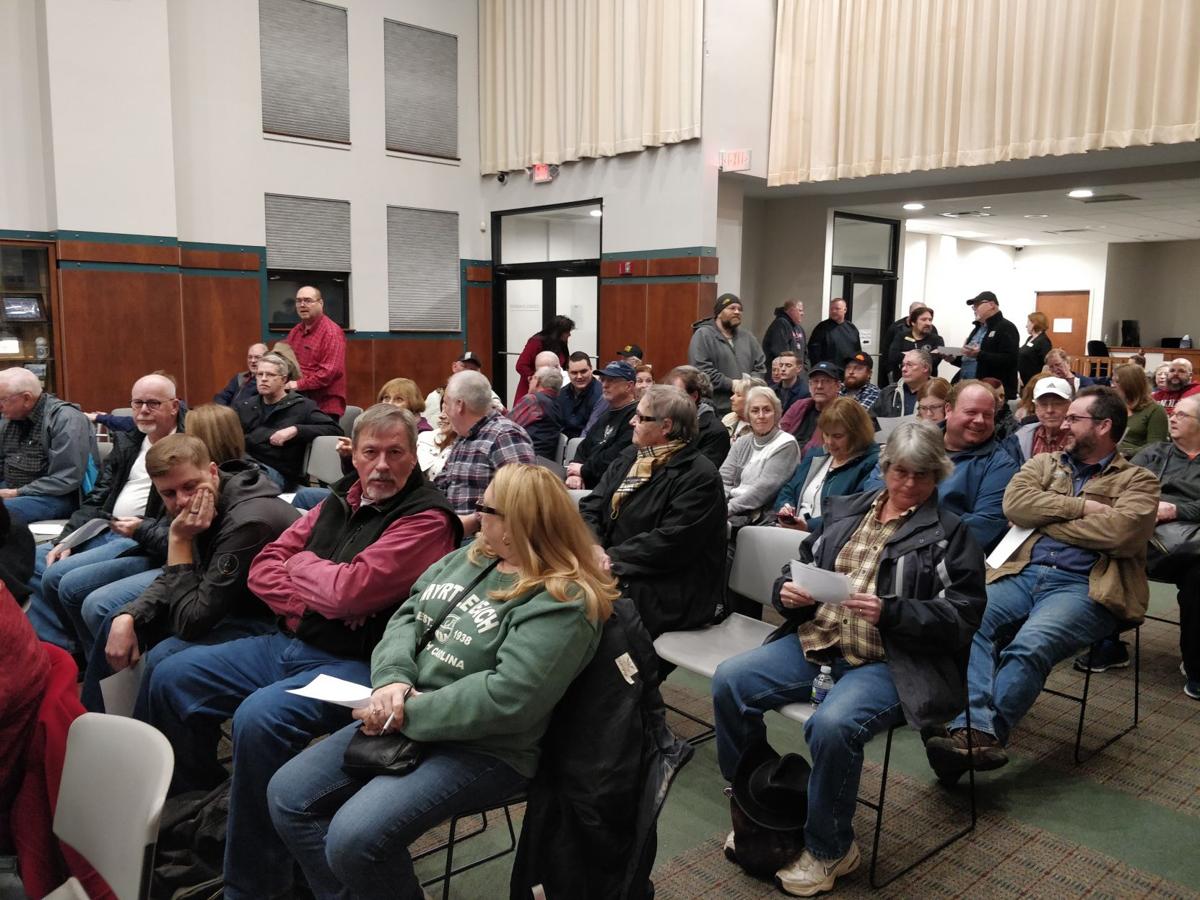 It was standing room only at a meeting Thursday to provide the public with more information on the recently approved Brown’s Station Way Master Plan, and receive their input.

Linda Harris gives her input on the recently approved Brown’s Station Way Master Plan at a meeting in Clarksville Thursday.

It was standing room only at a meeting Thursday to provide the public with more information on the recently approved Brown’s Station Way Master Plan, and receive their input.

CLARKSVILLE — More than 100 people packed into the Clarksville Town Hall Thursday to learn more about a controversial road plan, and offer input on potential projects within it.

In late January, the Clarksville Redevelopment Commission approved 3-2 the Brown’s Station Way Master Plan, which includes a series of recommended changes over the next 10 years to the two-mile stretch of road that has historically served as a cut-through between Interstate 265, Floyd County and beyond.

Created by Clark Dietz Engineering, the plan recommends turning the road into a two-lane town parkway from its current four lanes, reducing speed to 35 miles per hour from 45, adding two small roundabouts and constructing a new pedestrian bridge after the previous one was destroyed in early 2018 during a fatal truck accident.

The redevelopment commission has already voted to move forward with design of the pedestrian walkway/gateway into town, expected to be completed by late 2021. But town representatives say the other projects within the plan are not set in stone; the plan is a guide to help them move toward improving safety and connectivity over the next decade.

Preliminary costs for the pedestrian walkway are $3.35 million and $12.5 million for the remainder of the road improvements. Town officials say they will seek state and federal funds where available for the potential projects.

Clarksville Redevelopment Commission President A.D. Stonecipher said the purpose of the meeting was to “make sure that the public has the facts on the vision and initial design and to have a final opportunity to provide input on that,” he said. “There will be opportunities as we move forward to make compromises, make changes on the final design.”

He added that it was “prudent to get additional feedback given that the commission and the council have been divided on what that final design should be.”

Wes Christmas, civil engineer with Clark Dietz, presented an overview of the plan to those in attendance, outlining the five main goals the team focused on when creating the plan and forming recommendations — improving safety, connecting Clarksville, planning for maintenance, creating an identity and strengthening the sense of community.

He said a lot of things have changed since the road was built in the 1950s, including billions of state dollars invested in nearby interstate systems. He said the impetus of the plan was not just to look at ways to improve things right now, but include future additions to the area, such as the River Heritage Conservancy.

“There are [current] problems, but a lot driving this was the future of Brown’s Station Way,” he said, adding that there are safety concerns with the road as it is — a “partially limited access highway,” which also allows things like left-hand unsignaled turns across multiple lanes.

At the start of the meeting, attendees could write down questions or concerns they had, many of which were read and answered by town staff after the presentation.

One of those who submitted her input was Linda Harris, who’s worked 39 years at Culligan water Systems on North Clark Boulevard.

“I feel very concerned because our business is on the corner of Clark Boulevard and Brown’s Station Way and we have lots of trucks that use that interchange daily, plus all the semis that come and deliver to us daily,” she said before the meeting had started. “How are we going to be able to continue our business if we don’t have direct access?”

Another was Patrick Tucker, a Clarksville resident who works at Tucker’s Garage on North Clark Boulevard.

“Honestly, I think it’s just a complete waste of money,” he said. “I don’t see there’s a public safety problem with it at all...$12 [million], 16 million dollars, that’s quite a chunk of change.” Tucker said he sees better use for it — like putting it toward other aging corridors or fixing flooding issues around Blackiston Mill Road.

Mary Tucker, the owner of the garage, is worried about what the potential changes could do to business — including neighboring businesses.

“We need people to hear what’s going on,” she said. “What they’re trying to do they’re going to hurt us business people.”

The public can view the plan and participate in a related survey though March 6 by visiting https://www.townofclarksville.com/project/brown-station-way-master-plan/. The questions and concerned posed at Thursday’s meeting will also be published and answered on the website.

To learn more about the Brown Station Way Master Plan or offer input on the projects via survey, visit https://www.townofclarksville.com/project/brown-station-way-master-plan/.

The survey will be available until March 6.