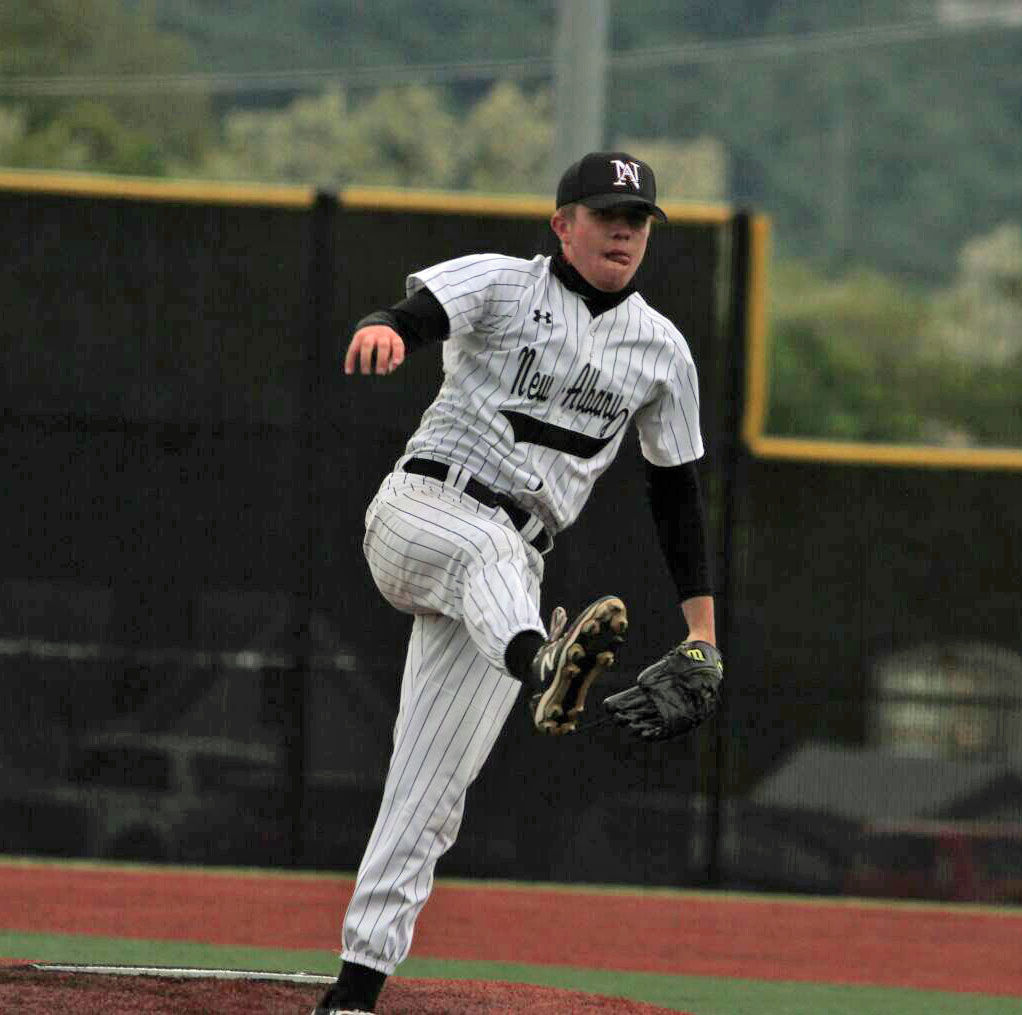 New Albany junior Tucker Biven tossed a 1-hit, complete-game shutout to lead the Bulldogs to a 5-0 victory over visiting Columbus East in the first round of the Hoosier Hills Conference Tournament at Mt. Tabor Field. 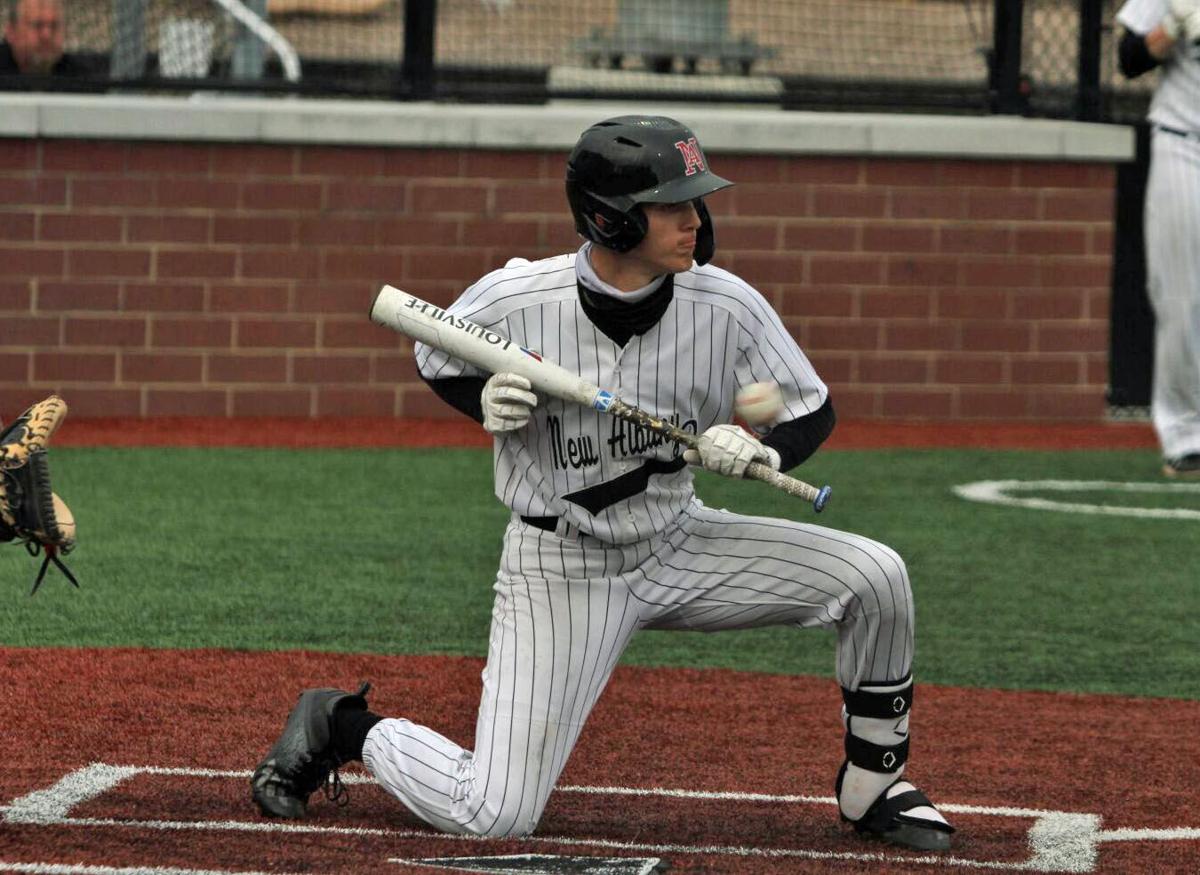 New Albany’s Landon Tiesing tries to lay down a bunt during the Bulldogs’ 5-0 victory over visiting Columbus East on Monday evening at Mt. Tabor Field.

NEW ALBANY — Tucker Biven tossed a one-hit, complete-game shutout to lead Class 4A No. 6 New Albany to a 5-0 victory over visiting Columbus East in the first round of the Hoosier Hills Conference Tournament on Monday evening at Mt. Tabor Field.

Biven only allowed a single with one out in the top of the seventh while walking two and striking out eight to improve to 4-0 on the mound.

The Bulldogs scored single runs in the first and fifth frames before tallying three times in the sixth.

Landon Caswell and Mitchell Meyer each had two hits and an RBI to lead New Albany at the plate. Garrett Jones also had a hit and an RBI for the Bulldogs (17-4), who will host Floyd Central at 6 p.m. Wednesday evening in the HHC Tournament semifinals.

FLOYDS KNOBS — A seven-run sixth inning propelled Floyd Central to a 9-4 victory over visiting Bedford North Lawrence in the first round of the HHC tourney at Highlander Field.

The game was tied 2-all until the Highlanders’ huge inning.

Sorg also picked up the win on the mound. The senior allowed four runs (three earned) on five hits while walking two and striking out six over the seven innings.

JEFFERSONVILLE — Three-time defending champion Jeffersonville rallied for a 5-4 nine-inning victory over visiting Seymour in the first round of the HHC Tournament at Don Poole Field.

The Owls led 4-2 with two outs in the bottom of the seventh before Kannon Stull tied it up with a two-run homer.

Then in the bottom of the ninth three straight walks set the stage for sophomore Brett Denby, who singled to left field to score Josh Weiser with the winning run.

“I was telling everyone in the dugout, if I get up (in the ninth) I’m going to end the game,” the Georgia commit said. “I knew it off the bat — game over.”

“We fought,” Jeff coach Derek Ellis added. “We didn’t fold and we kept battling right down to the last out. The disappointing thing is we were losing a game in the seventh inning and (Seymour) only had two hits. That’s a little frustrating.”

Stull led the Red Devils at the plate, going 2-for-3 with a double, home run and four RBIs.

Jeff (14-8), which has won six straight and nine of its last 11, will host Madison at 6 p.m. Wednesday night in an HHC semifinal.

Creek scored single runs in the third and seventh frames to go along with two in the fourth.

Decker and Bailey Hale had two hits apiece for the Dragons. Decker also had a pair of RBIs for Silver Creek (13-5-1), which is scheduled to host Kentucky’s top-ranked team, Louisville Trinity, at 6 p.m. Tuesday night.

"I was pretty pleased with our pitching, however we had a few errors that allowed them to score," Clarksville coach Jamie Knight said. "Offensively, we just didn’t make adjustments to their pitchers who did a good job of mixing up their pitches."

The Braves had nine hits, including a second-inning grand slam by Gavin Gentry, in the win. Meanwhile on the mound, Samuel Gasper earned the complete-game victory. Gasper allowed one earned run on four hits while walking one, hitting one and striking out four.

Also for Borden, Kaden Holmes went 3-for-4 with an RBI; Alex Schuler was 2-for-3 with a double and an RBI and Dylan Toler homered.

"Sam threw really well tonight. He went the distance and gave us a great start on the mound," Braves coach Eric Stotts said. "Gavin Gentry's grand slam in the second was huge. Dylan Toler had a solo shot in the fifth too, but we had contributions throughout the lineup. Guys took walks, got runners in by putting the ball in play and (we) had a number of quality at-bats. Our defense was solid tonight too. It was a good win against a potential sectional opponent."

PEKIN — Charlestown held off host Eastern for a 4-3 win in a Mid-Southern Conference contest Monday evening.

The Pirates plated single runs in the first, third, sixth and seventh innings while the Musketeers tallied twice in the fifth and once in the seventh.

Ethan French, the third Pirates pitcher, picked up the win. In two innings of relief, the freshman allowed one earned run while walking three and striking out one.