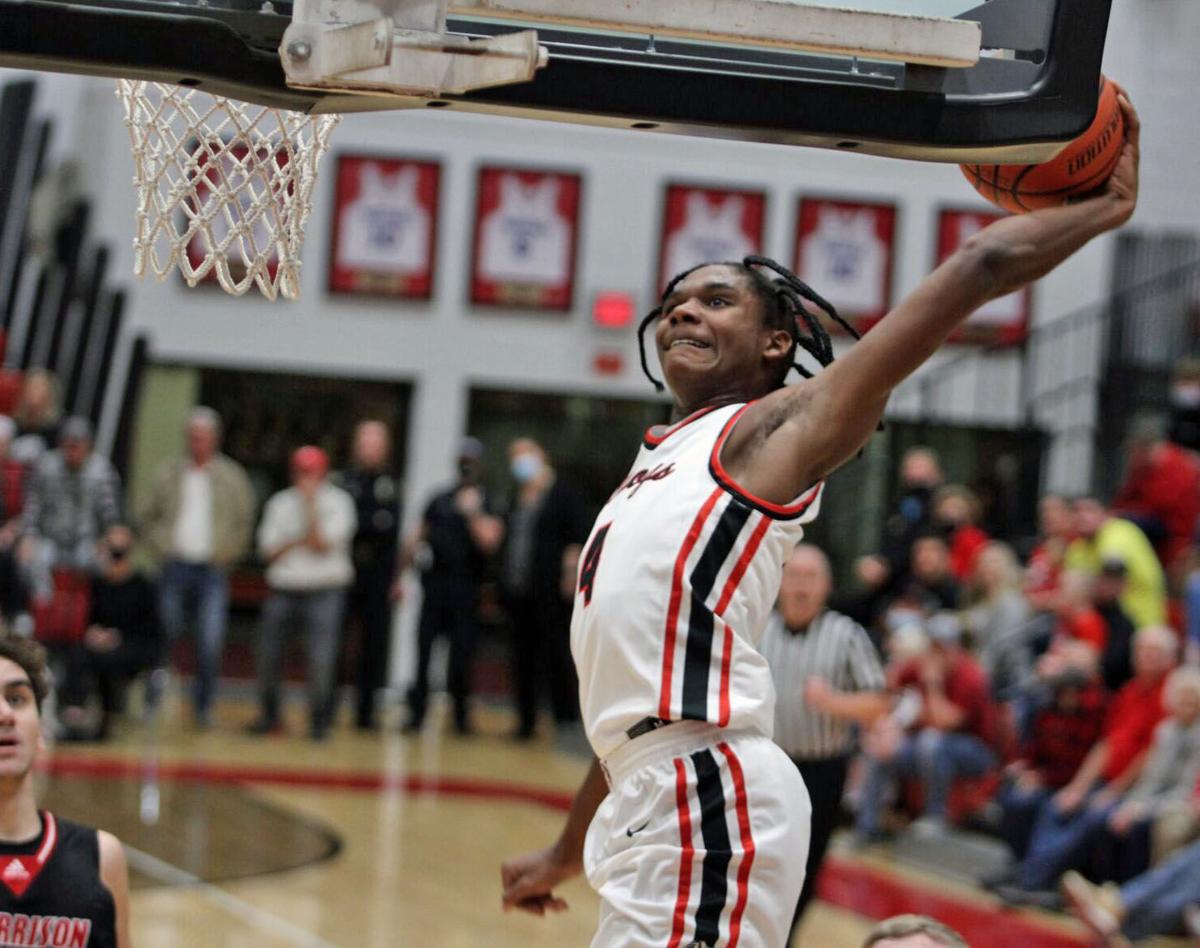 New Albany junior Josten Carter rises for a dunk during the Bulldogs’ 61-59 come-from-behind victory over visiting Evansville Harrison on Friday night at the Doghouse. Carter tallied a game-high 22 points in the win. 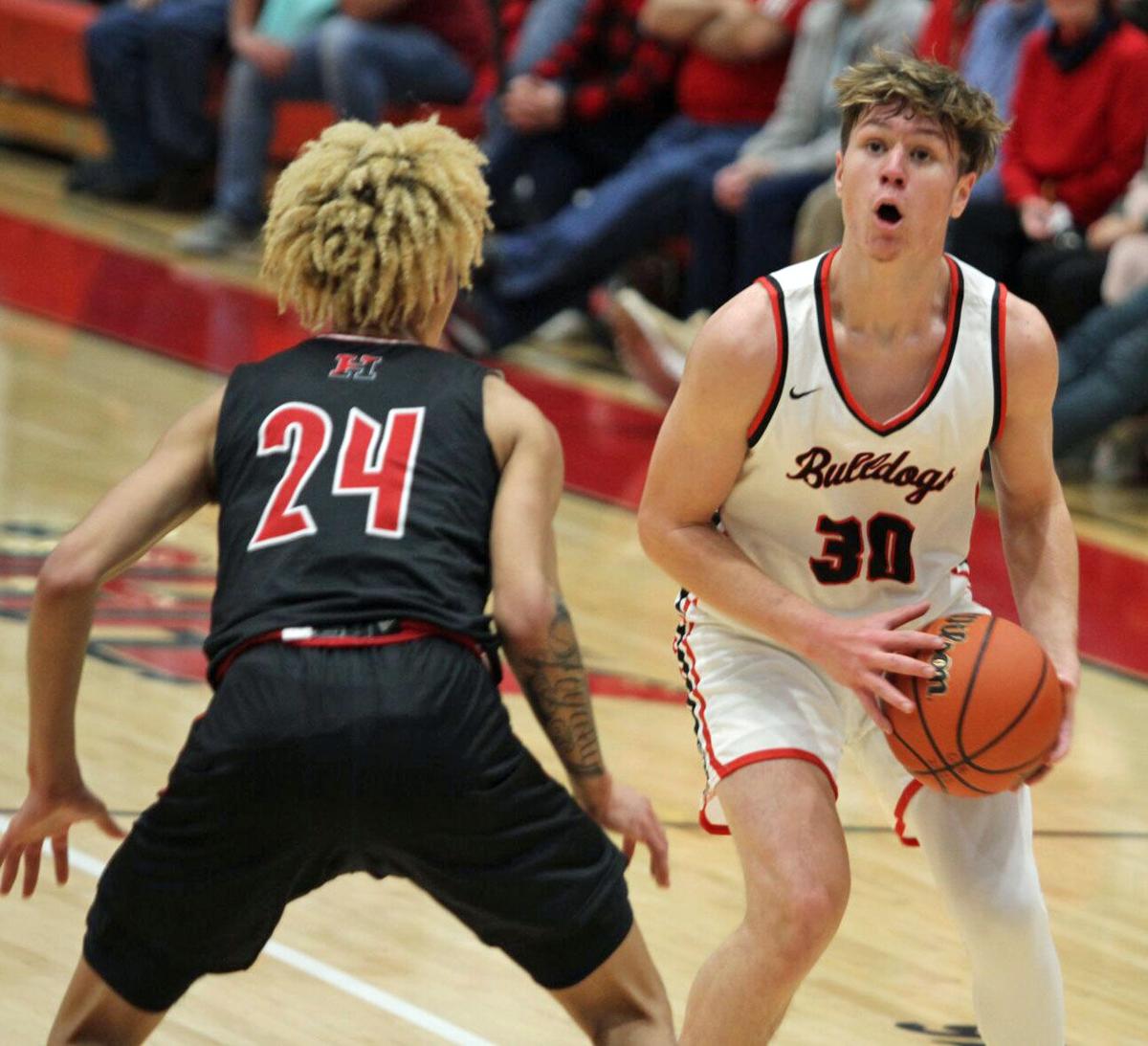 New Albany senior Jayden Thompson eyes a 3-point shot during the Bulldogs’ 61-59 victory over visiting Evansville Harrison on Friday night at the Doghouse. Thompson tallied 19 points, including 11 in the third quarter, for New Albany. 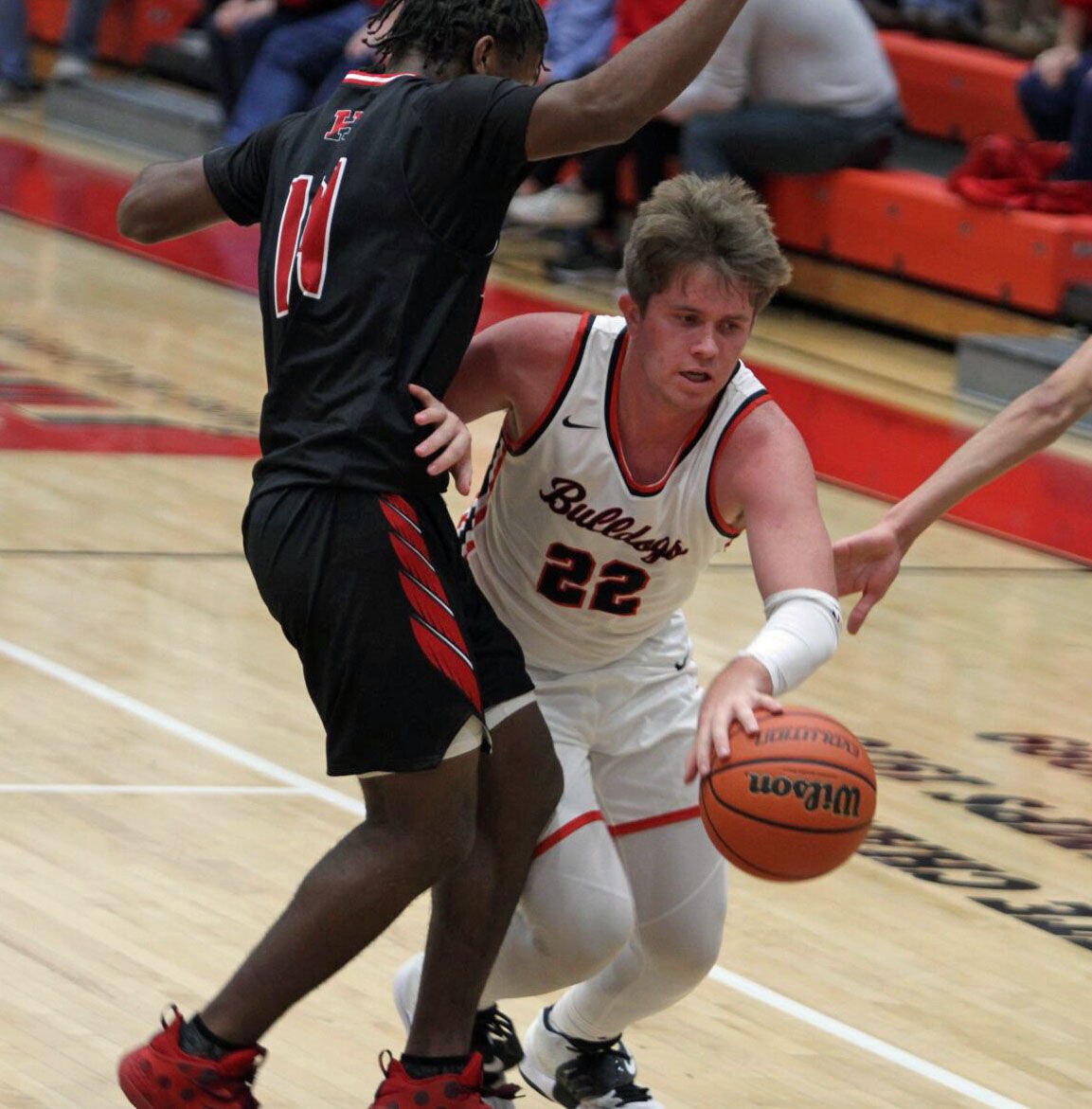 New Albany senior Tucker Biven gets around an Evansville Harrison defender Friday night during the Bulldogs' 61-59 win over the Warriors. Biven scored nine points and dished out four assists.

NEW ALBANY — Senior Jayden Thompson admits that there have been some growing pains with this New Albany team, which features several new faces.

Friday night, though, the Bulldogs learned a lot about themselves.

Once trailing by as many as 13 points in the first half, New Albany rallied for an exciting 61-59 victory over visiting Evansville Harrison at the Doghouse.

Thompson made a late steal, then passed ahead to Josten Carter, who was intentionally fouled by Darius Suggs with 6.2 seconds to play in a tie game.

Carter, who led the Bulldogs with 22 points, made the second of two foul shots to put the hosts on top 60-59. Then, Tucker Biven was fouled with 2.6 remaining and he made his first free throw to put New Albany up two.

After a timeout, Harrison pushed the ball down the floor, but Jerry Hooks’ wild shot never had a chance and the ‘Dogs secured the win.

“I knew they were going to try and go to (Johnny) Summers for the last shot,” said Thompson who finished with 19 points including four second-half 3-pointers. “They needed a bucket and he’s a good driver. As soon as he got the ball on the elbow I knew he was going to try and do something. He kind of put the ball behind his head, so I thought I had to go take it.”

A Thompson layup and his 3 from the right side gave the Bulldogs their first lead, at 53-50, with 36 seconds left in the third quarter.

“We dug ourselves a hole,” New Albany coach Jim Shannon said. “We talked at halftime about … ‘We are just going to have to go back out and get ourselves back in the game.’ I thought things would turn around offensively. But defensively, that was what was going to get our motors going. I thought we played pretty good defense in the second half.”

Harrison jumped ahead 55-53 early in the fourth quarter, but a Thompson 3 gave the lead back to New Albany with 2:33 to play.

Suggs, who had 19 points to lead Harrison, made two foul shots and a layup after a steal for a 59-58 lead.

Harrison then decided to spread the floor and hold the ball. However after a missed shot, New Albany rebounded and Carter made the second of two free throws to tie the game at 59 with 1:25 left.

Then came the heroics by Thompson and Carter.

“He is so darn quick,” Shannon said of Carter. “He gets his hands on a lot of deflections and loose balls. If he gets out ahead of people he is really hard to catch.”

Thompson was happy with his team’s play in the second half.

“Shoutout to my teammates,” he said. “They started screening for me and I was able to hit my shots.

New Albany trailed 17-13 after a steal and a thunderous dunk from Harrison’s Summers late into first quarter. A Dashawn Willett 3 early in the second quarter pushed Harrison to a 21-13 lead.

The ‘Dogs cut the deficit to six, but the Warriors responded with seven straight points to go ahead 33-20.

The Bulldogs went on a run of their own, scoring nine straight points.

Carter, who had 18 points in the first half, had seven during the spurt as his team trailed 39-34 at the break.

Harrison had a good shooting first half making 15 of 26 from the field while New Albany was 11 of 21.

“We have a completely different team this year,” said Thompson. “Everything is a little different. It was a must-win for us. I feel we faced adversity, but we stayed together.”