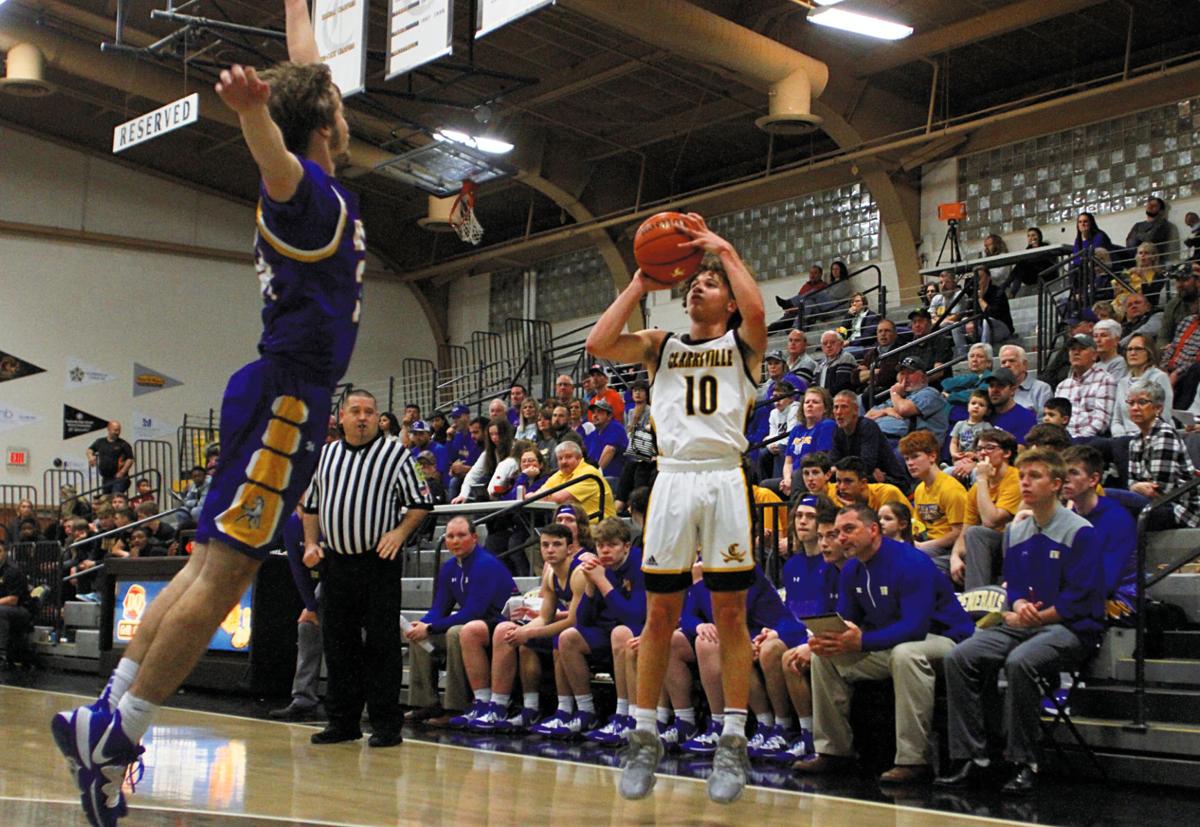 Clarksville guard Jaren Starks puts up a 3-pointer Saturday against New Washington. The junior guard hit eight 3-pointers over the weekend for the Generals. | 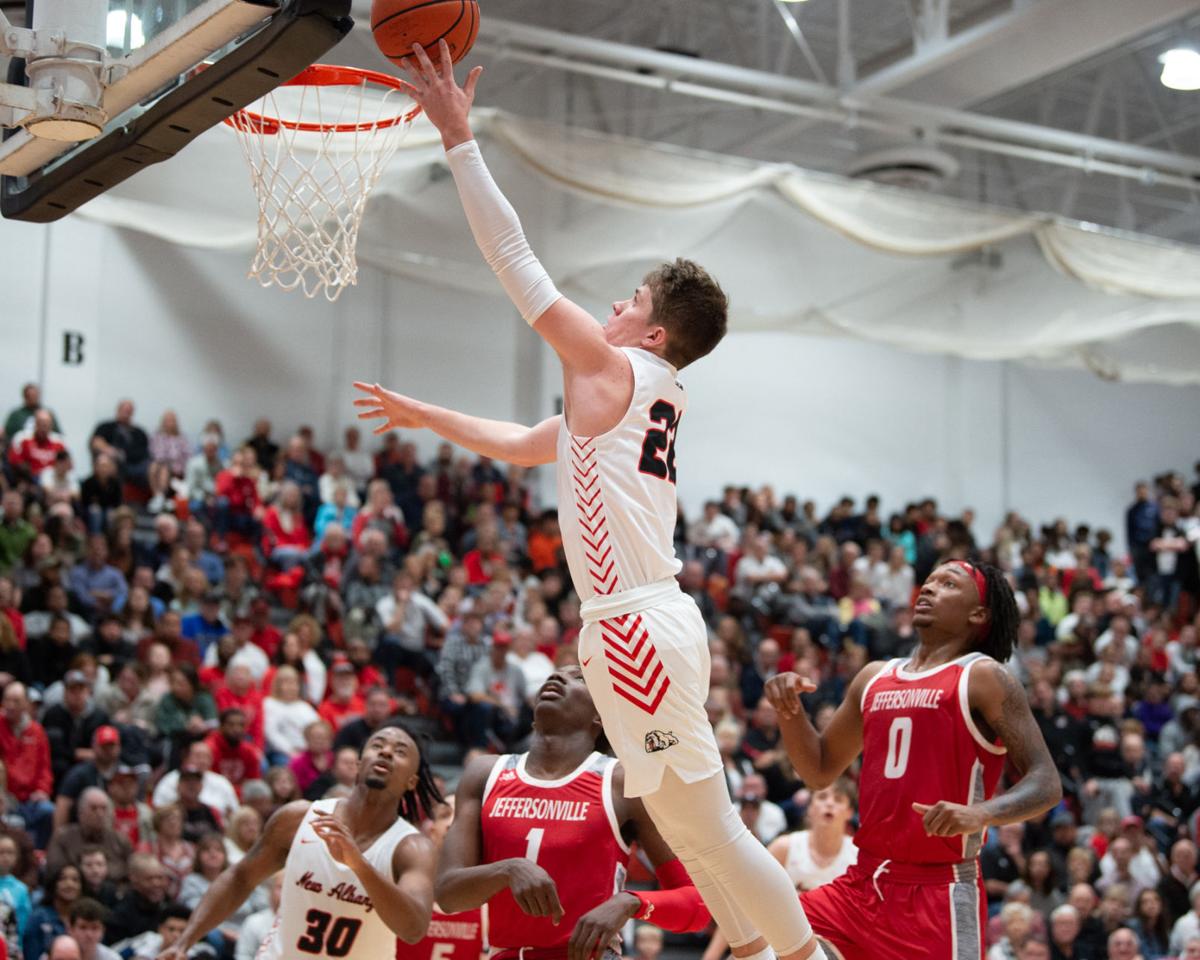 New Albany's Tucker Biven lays in a shot during the Bulldogs' 59-52 overtime loss to visiting Jeffersonville on Friday.

Clarksville guard Jaren Starks puts up a 3-pointer Saturday against New Washington. The junior guard hit eight 3-pointers over the weekend for the Generals. |

New Albany's Tucker Biven lays in a shot during the Bulldogs' 59-52 overtime loss to visiting Jeffersonville on Friday.

Welcome back to Tuesday’s Takeaways, where we take a look back at the weekend that was in boys’ high school hoops.

Here are a quartet of our thoughts to get the ball bouncing this week.

1. SHANNON NOT DISCOURAGED, AND HE SHOULDN’T BE

In spite of his team’s fifth loss in 11 games, New Albany coach Jim Shannon was anything but crestfallen following Friday night’s 59-52 overtime setback to archrival Jeffersonville. And he shouldn’t have been.

The Bulldogs gave the Red Devils all they wanted, and then some.

In fact, if they could’ve corralled a late steal at the end of regulation, the ‘Dogs might have had a shot to win the game.

Despite that, there was plenty for Shannon to like about the way his team played. One reason for optimism was the overall grittiness of the Bulldogs, especially that of sophomore guard Tucker Biven, who single-handedly helped force overtime by scoring seven points in the final 1 minute, 25 seconds of regulation to tie the game. Another was the play of junior big man Jordan Thomas. The 6-foot-7 forward tallied 10 points off the bench and gave Shannon valuable minutes when he rested senior forward Julien Hunter, who was playing only his second game of the season since returning from a stress reaction in his foot.

“Julien’s still fighting, trying to get back,” Shannon said. “He’s going to be so much better. His legs, he’s trying to go and he’s just getting tired so quick. I think he played about 18 minutes, but that’s OK. We don’t want to play him 30 minutes right now. We want to make sure he’s healthy before we up his minutes. And besides, Jordan Thomas was playing great tonight, so we really couldn’t take him out.”

Thomas’ continued development will be key for the Bulldogs in the second half of the season.

2. STARKS ONE OF TOP SHOOTERS AROUND

Clarksville junior guard Jaren Starks knocked down eight 3-pointers over the weekend, averaging 20 points as the Generals lost to Providence on a last-second shot Friday before bouncing back to rout New Washington 61-39 Saturday.

“He can really shoot the ball and he gets it off quick,” Clarksville coach Brian McEwen said. “He’s also really putting some effort into defending, so if your focus is there you’re not worrying about whether it’s going in or not. It’s good to see him get rewarded.”

Dae’von Fuqua, Clarksville’s top scorer, showed that he and Dakota Capps are both capable of creating shots for teammates. Fuqua leads the team with 4.3 assists per game to go with his 15.4 scoring average.

“He could get five to 10 assists a night. He’s a kid you can’t keep out of transition unless you score,” McEwen said Saturday, adding that he was pleased with the way his team responded from its loss the night before. “That was the best we’ve played. New Washington’s a good club. We came out focused and played with good effort.”

3. WILKERSON HAS MADISON ON A ROLL

In his first year at the helm of the Madison program, former Jeffersonville standout — and Red Devils assistant coach — Sherron Wilkerson has the Cubs off to their best start in 20 years.

With its 57-55 win at Scottsburg on Friday, followed by its 94-69 victory over Charlestown on Saturday night, Madison is 10-2 — its best start since the 1998-99 season. Despite the 25-point triumph over the Pirates, Wilkerson told the Madison Courier afterwards that his team wasn’t as sharp as he would have liked.

“It’s something where we need to be really focused. We’re trying to prepare for when you’ve got teams like Silver Creek and North Harrison in your sectional, your room for error is limited,” Wilkerson, who coached Shawe Memorial last season, told the Madison Courier following Saturday’s win. “We’ve really tried to focus on the process and I don’t think we did a very good of making the process happen. We got a win, which is good, but in comparison, we’ve got a lot of loose ends to tie up.”

The Cubs will carry a six-game winning streak into Friday night’s home game against New Albany. After that, Madison hosts Floyd Central on Jan. 25, plays at Class 3A No. 1 Silver Creek on Jan. 31 and entertains North Harrison on Feb. 1. For those looking ahead, Wilkerson brings his Cubs to Jeffersonville on Feb. 25.

The Cardiac Pioneers did it again Friday night, beating Clarksville 46-44 on Zack Johnson’s last-second shot. The victory was Providence’s third on a last-second shot (the Pioneers also won another game by hitting three free throws with seven-tenths of a second to play) this season. It also improved the Pioneers to 6-0 in games decided by four points or less.

Saturday night Providence blew out Shawe Memorial 64-43 for its eighth win — matching last season’s total. Under the direction of first-year coach Ryan Miller the Pioneers (8-3) have been one of the area’s surprise teams so far. However, they made need some more divine providence in the second half of the season. That’s because the back-end of the schedule includes games against Jeffersonville, Silver Creek, Christian Academy, New Albany, North Harrison and New Washington.

With another dominant win, the Dragons are up to 14th in the state in scoring average at 72.8 points per game. Last week: 1

The Highlanders’ ranking will be on the line against the Red Devils at home Friday night. Their only home loss the past three seasons came this season to unbeaten Bloomington South. Last week: 2

The Red Devils have played one of the toughest schedules in the state and that continues this Friday against Floyd Central. The Jeff seniors have led the way in three straight wins. Last week: 3

The Bulldogs saw plenty of positives against Jeffersonville and look to avoid falling to 1-3 in the Hoosier Hills Conference on Friday at Madison. Last week: 4

The Pioneers are simply getting results. The Pioneers are 0-2 so far against teams in our rankings — dropping games to Floyd Central and Silver Creek — and will get a shot at Jeffersonville on Saturday.