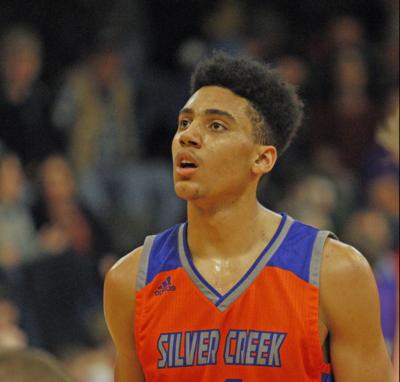 The 6-foot-9, 215-pound junior forward led the Dragons to a 25-2 record and a berth in the Class 3A regional semifinals at the time of his selection. Kaufman averaged 25.8 points, 9.6 rebounds, 2.9 assists, 1.6 blocks and 1.1 steals through 27 games as Silver Creek pursued its second straight state title. Ranked as the nation’s No. 28 recruit in the Class of 2021 by 247Sports.com, he entered the regional semifinals with 1,243 points in his prep basketball career.

Kaufman has volunteered locally as a youth basketball coach.

“Trey has 3-point range, can put it on the floor and at 6-9 can obviously score in the paint,” said Jim Shannon, head coach of New Albany High. “He takes a pretty good beating from the opposing team each game, but I have never seen him lose his cool.”

Kaufman has maintained a 4.0 GPA in the classroom and ranks No. 1 in his class. He will begin his senior year of high school this fall.