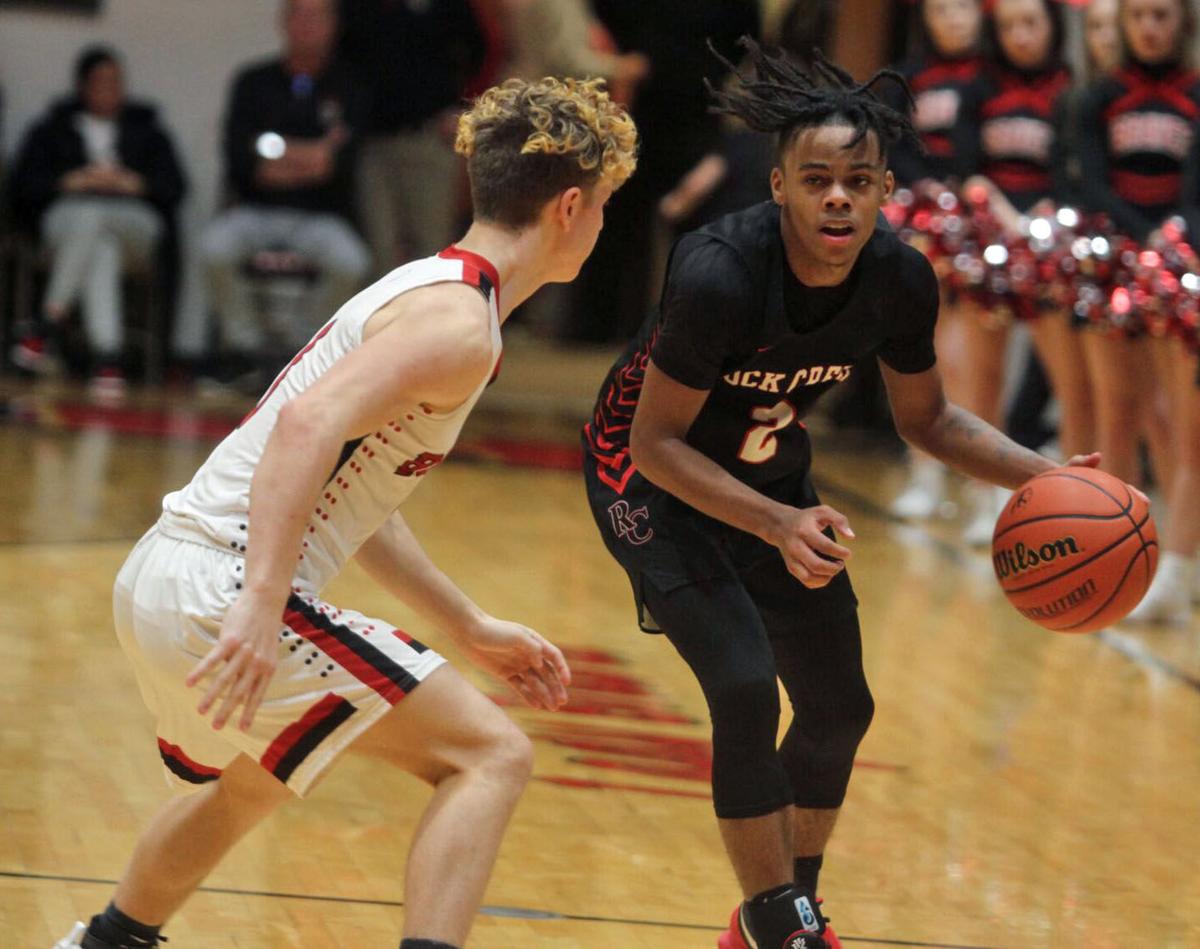 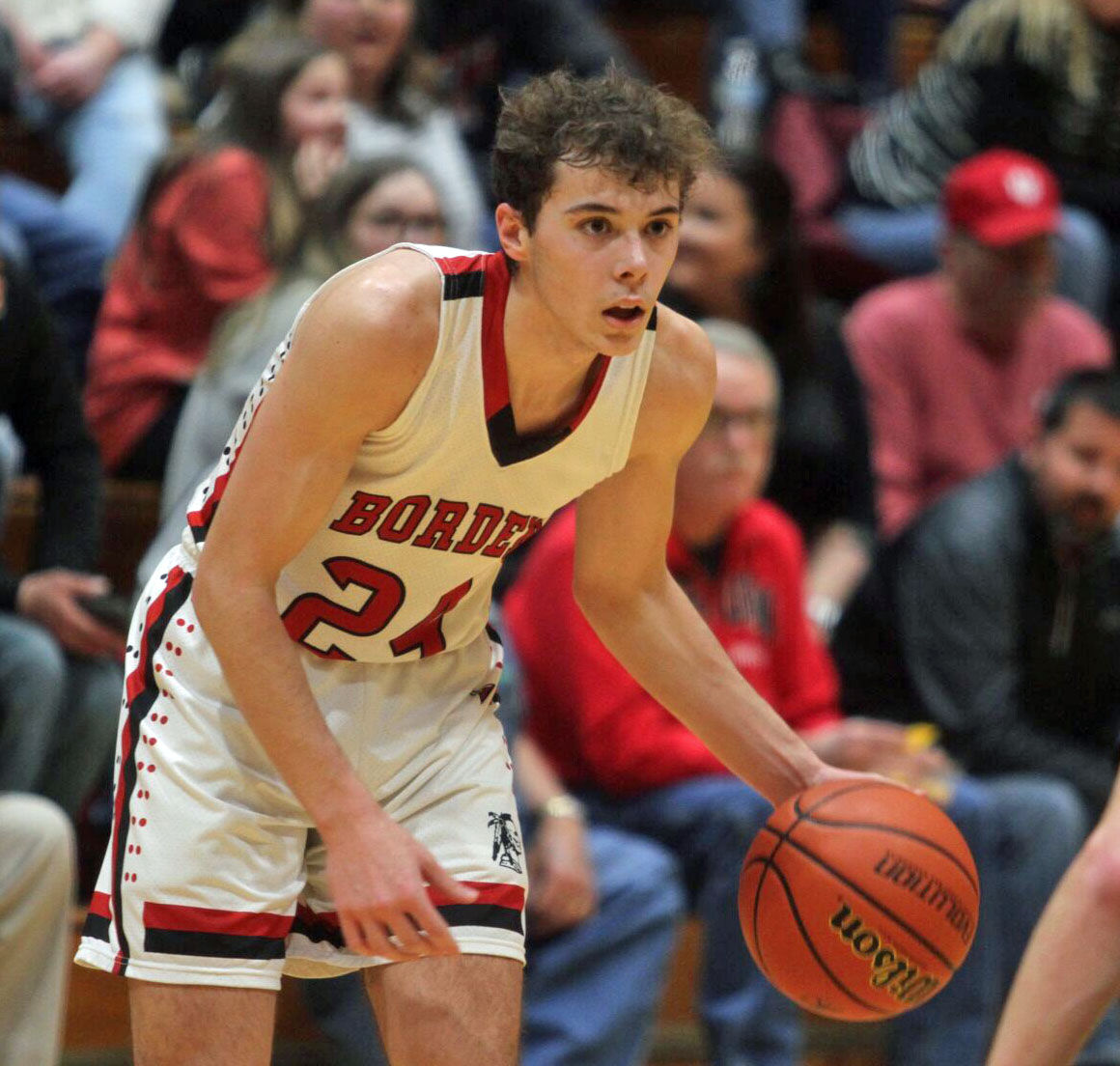 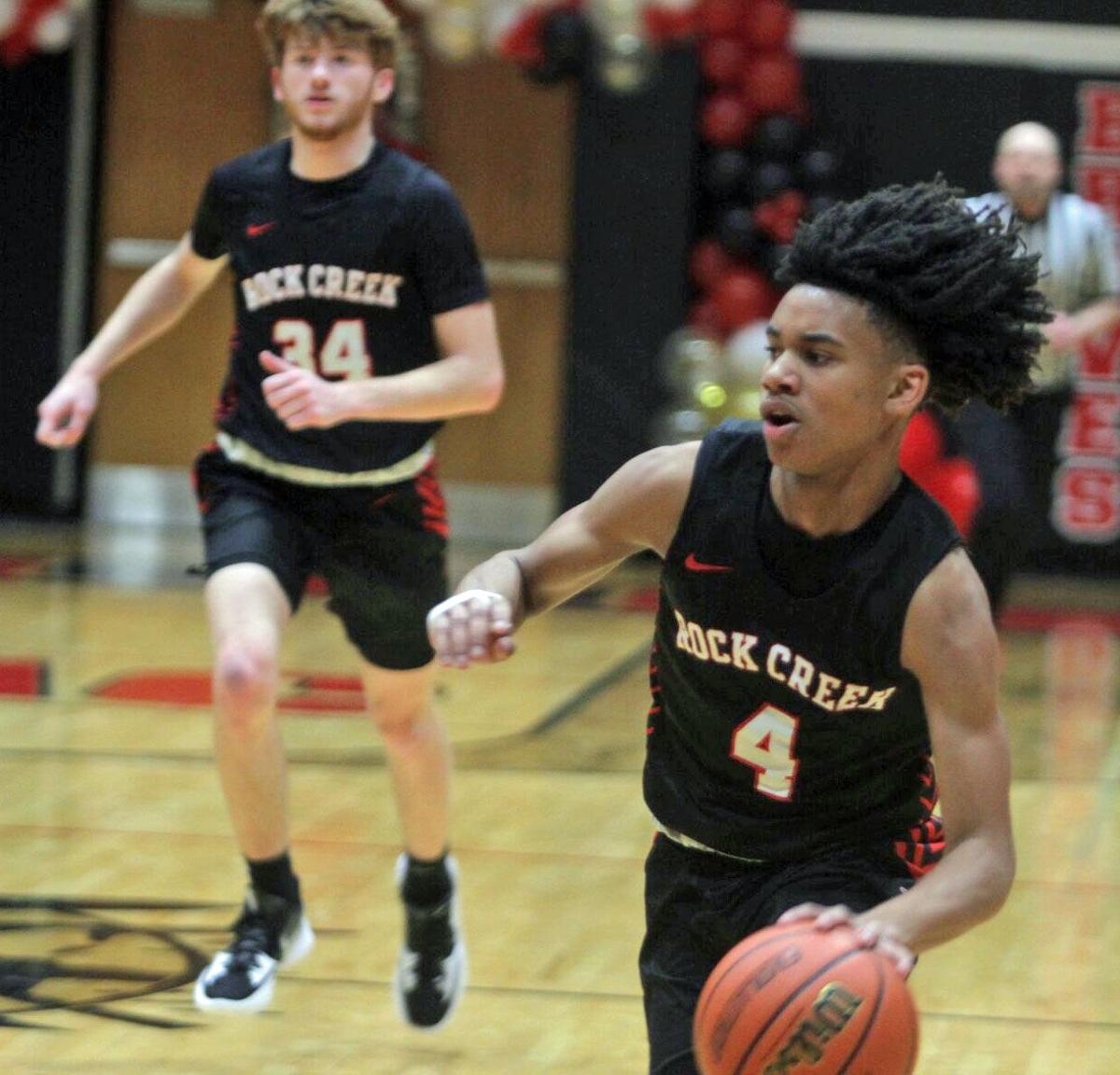 Rock Creek’s Keajuan Beco drives to the basket during the Lions’ 57-42 win at Borden on Saturday night.

Rock Creek’s Marial Diper prepares to take a jumper during the Lions’ 57-42 win at Borden on Saturday night.

Rock Creek’s Keajuan Beco drives to the basket during the Lions’ 57-42 win at Borden on Saturday night.

Rock Creek’s Marial Diper prepares to take a jumper during the Lions’ 57-42 win at Borden on Saturday night.

BORDEN — Rock Creek ran out to an early lead and never looked back en route to a 57-42 win at Borden in a matchup of sectional foes Saturday night.

Sparked by 6-foot-7 junior forward Jaleb Treat, who scored eight first-period points, the Lions led 16-7 at the first stop. The Braves then pulled within 26-18 by halftime.

The Lions added to their lead in the final frame on their way to ending a four-game losing streak.

“It was a good win for us. We needed it,” Rock Creek junior point guard Ladarius Wallace said. “We lost four games in a row and I think we needed that to set the tone for the season for us. It was a good game, there were no arguments or none of that, we’ve been preaching that in practice. We’ve been having decent practices so I think that just carried on to the game.”

Treat tallied a team-high 14 points while Diper added 12 for the Lions, who had their way inside. Wallace and Keajuan Beco netted nine apiece for Rock Creek (5-5).

“We really just wanted to get everybody on (the same) page,” said Wallace, whose team is slated to host Louisville Portland Christian at 7:30 p.m. Friday night. “We were going to just work as a team and just get used to that. Once we get used to that I think we’ll be a hard team to beat this year.”

Sophomore Kasym Nash netted a game-high 18 points, on the strength of four 3-pointers, to lead the Braves. Mason Jones added eight for Borden (8-4), which next hosts Austin at 7:30 p.m. Friday night.

New Wash led 11-8 at the end of the first quarter before the Generals pulled within one by halftime (23-22) and tied it (at 36) by the conclusion of the third period.

Dakota Capps tallied 10 of his team-high 24 points in the final frame as Clarksville rallied for the win. Alex Titus added 12, all on 3-pointers in the second quarter, while newcomer Nadir Muhammad netted nine. Jacob Seward also scored seven in the fourth quarter to back Capps.

Arthur, who scored 15 of his game-high point total in the last period, finished with 12 field goals, including two 3-pointers. He was also 7 for 8 from the free throw line.

His younger brother, Mason, added 19 points on the strength of five 3-pointers for the Mustangs (2-10), who next host Henryville at 7:30 p.m. Friday night.

HENRYVILLE — Sam Guernsey tallied 20 points, including 16 in the first half, to lead host Henryville to a 57-28 triumph over Trinity Lutheran on Saturday night.

Guernsey hit nine field goals and was 2-for-2 from the free throw line in the win.

The Hornets got off to a fast start, outscoring the Cougars 18-4 in the first quarter behind eight points from Guernsey. Lutheran pulled within 11 (26-15) by halftime, but Henryville outpointed the visitors 31-13 over the final two frames.

"Sam Guernsey played a heck of a ball game," Hornets head coach Jared Hill said. "We got back to playing some really tough defense and fighting for one another. I am very proud of these guys."

Henryville (4-7) will next visit New Washington in a Southern Athletic Conference game at 7:30 p.m. Friday night.

NEW ALBANY — Class 4A No. 8 Cathedral got off to fast start, then received a red-hot third quarter from Tayshawn Comer, en route to a 94-56 win at New Albany on Saturday night.

Six-foot-10 junior center Xavier Booker, who is being recruited by Indiana among others, added 16 points — 14 in the first half — for the Irish. Jaron Tibbs also netted 16 while Jaxon Edwards chipped in with 12 for Cathedral.

Meanwhile Tucker Biven scored a game-best 30 points for the Bulldogs. The senior hit 10 field goals, including six 3-pointers, and was 4 for 7 from the free throw line. Newcomer Future Brooks added 15 points and Chase Loesch tallied 10 for New Albany (4-5), which next visits Southwestern at 7:30 p.m. Tuesday night.