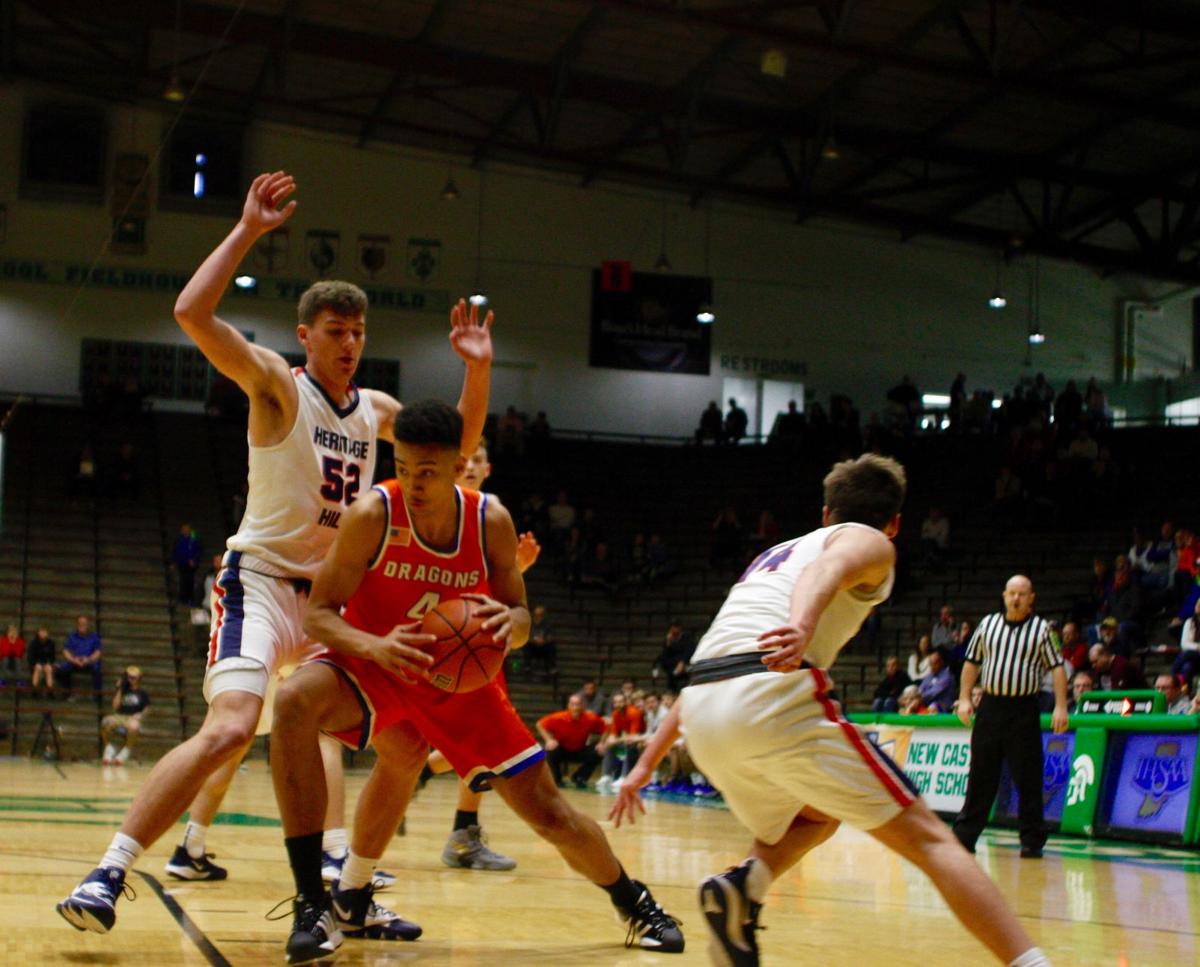 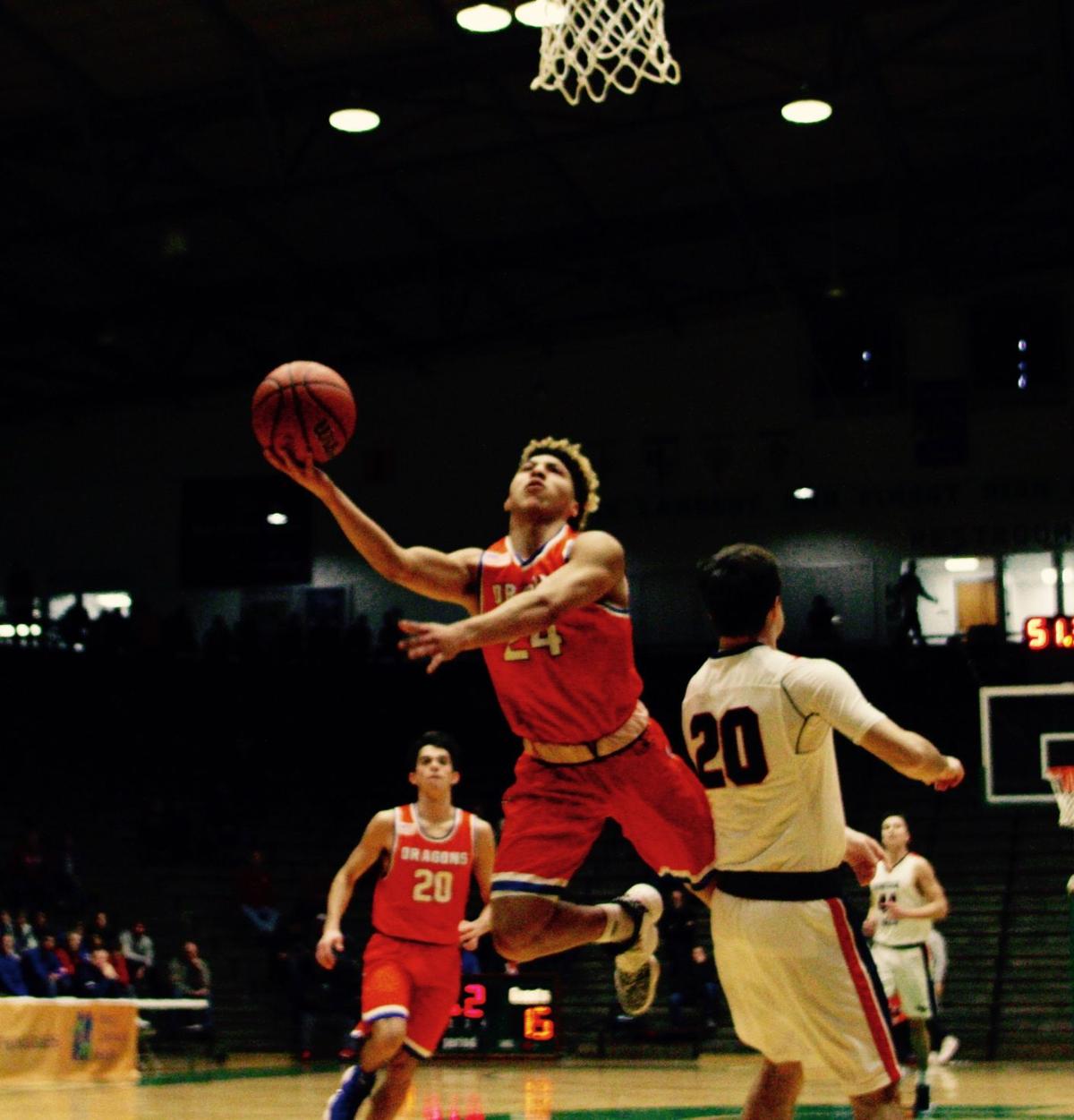 Silver Creek's Branden Northern gets in the lane for a layup Saturday morning during the Dragons' overtime win against Heritage Hills. | STAFF PHOTO BY CRAIG PEARSON 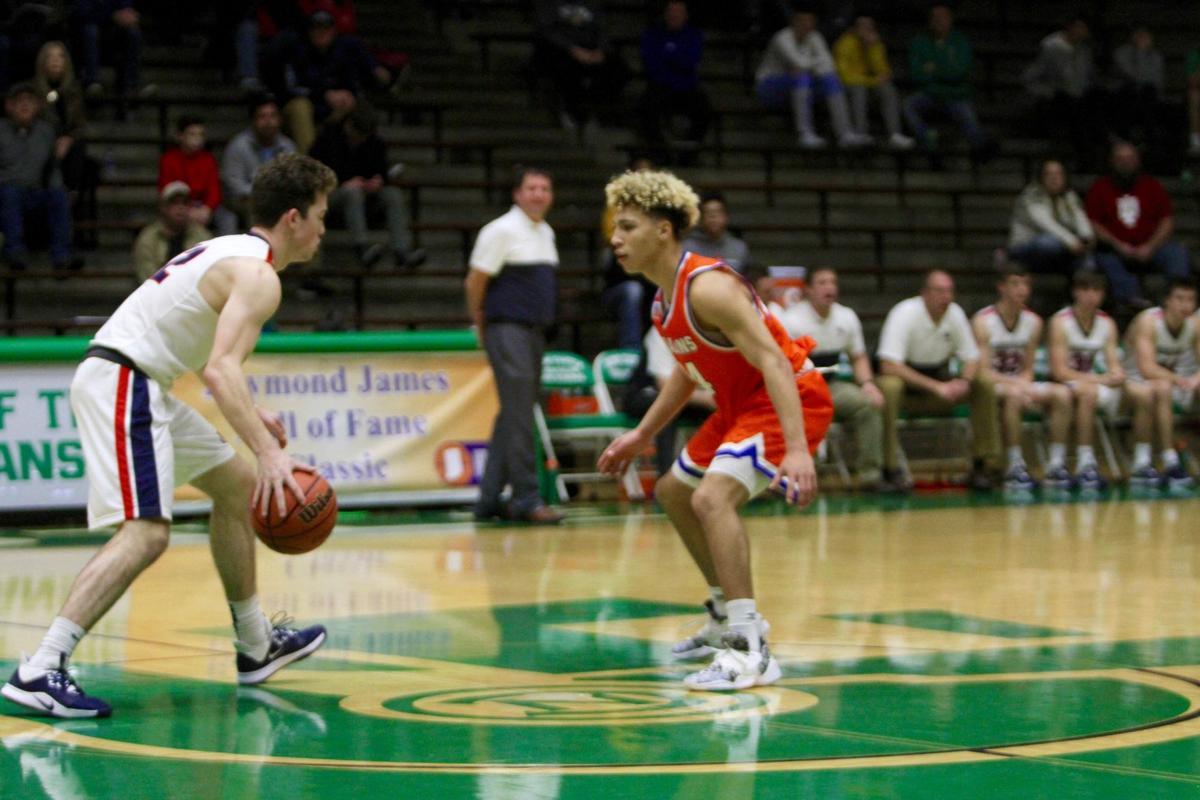 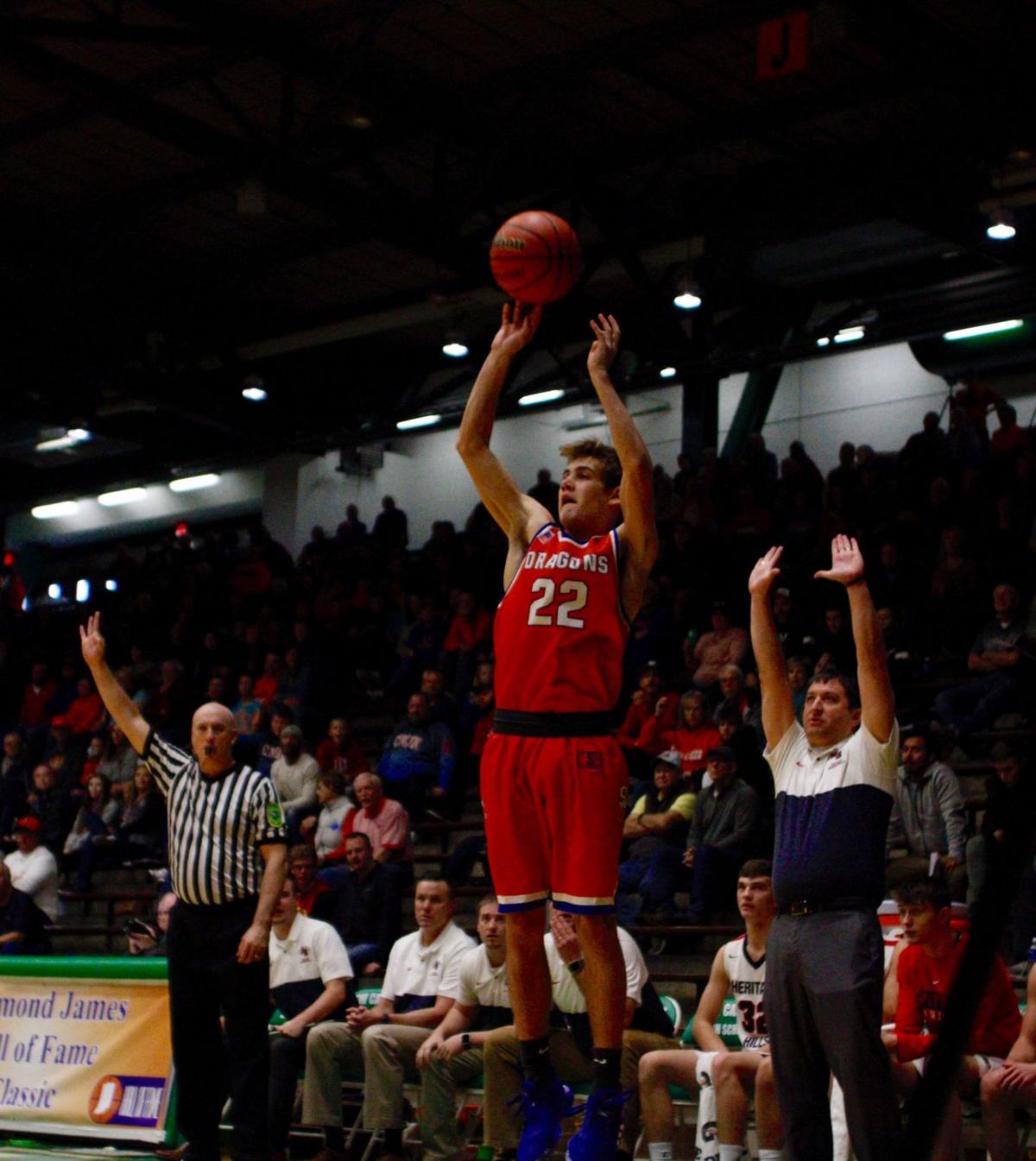 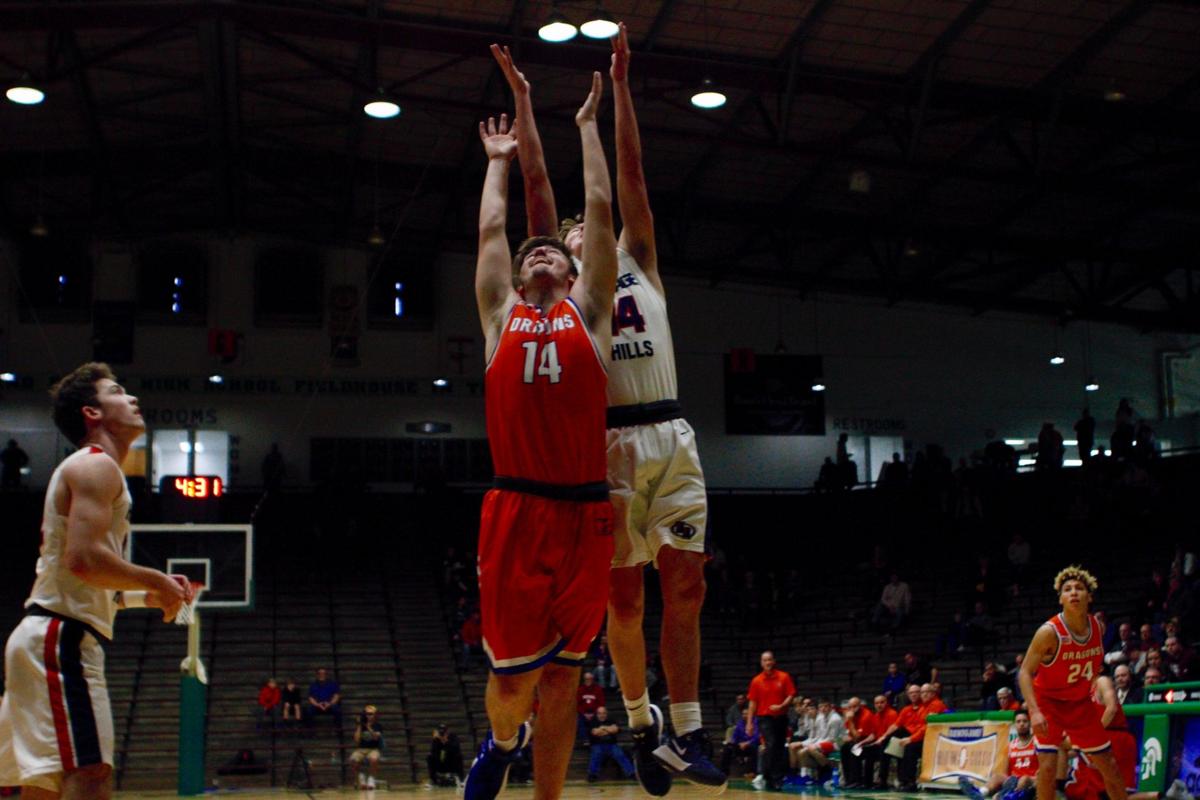 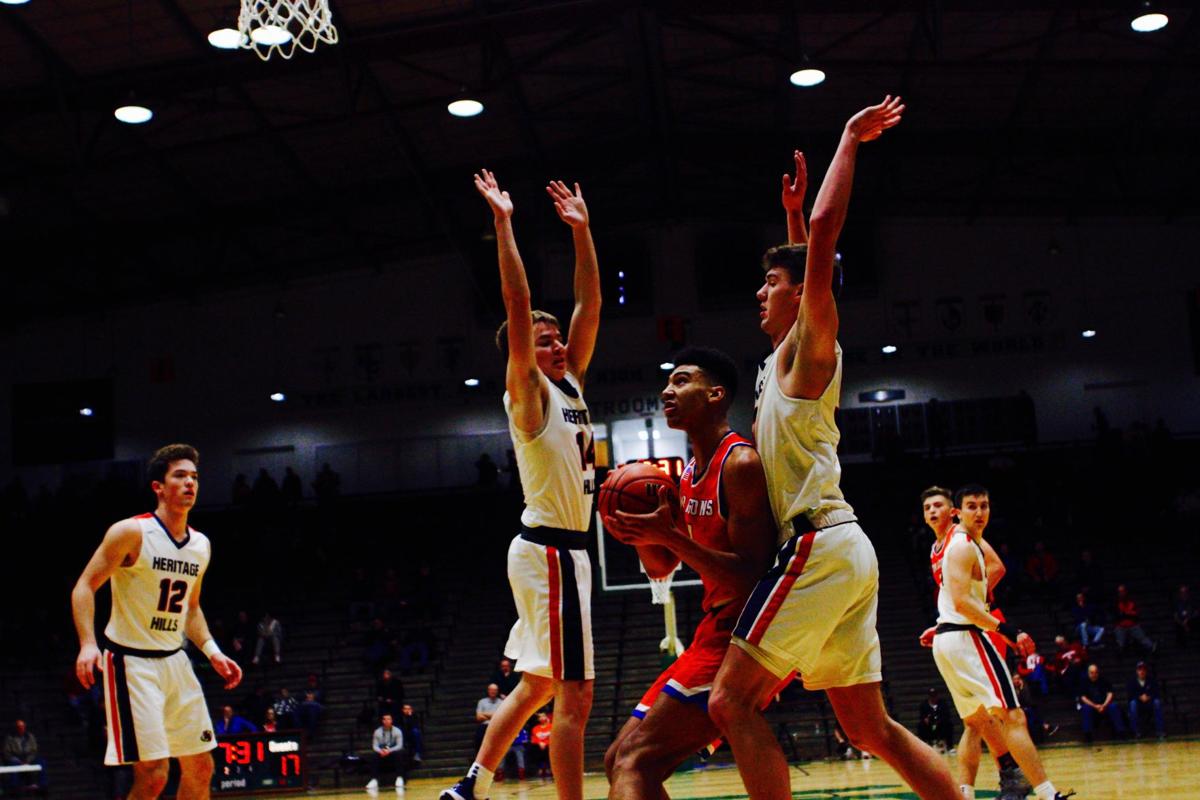 Silver Creek's Branden Northern gets in the lane for a layup Saturday morning during the Dragons' overtime win against Heritage Hills. | STAFF PHOTO BY CRAIG PEARSON

Kooper Jacobi kicked out to Branden Northern for a 3-pointer at the top of the key and the comeback had begun. Similar execution at the offensive end continued and the Dragons’ full-court pressure wreaked just enough havoc to spark a rally that forced overtime. Silver Creek did not need a comeback in overtime, scoring on its first five possessions before Trey Kaufman and Jacobi drained free throws to ice an 82-78 win in the first round of the Raymond James Hall of Fame Classic.

The Dragons, ranked No. 1 in Class 3A and No. 4 in the one-class Indiana Basketball Coaches Association poll, will face Lawrence Central (5-1), ranked No. 4 in both the 4A AP and the coaches’ poll, in tonight’s championship game at New Castle Fieldhouse. The Bears held off No. 3/No.5 Lafayette Jeff 78-60.

“We’ve got to play hard and play our game. If we play together, we have a chance,” said Northern, who finished with 14 of his 19 points in the fourth quarter and overtime.

Kaufman had game-highs of 32 points and 13 rebounds for the Dragons. Sisley led 3A No. 2 Heritage Hills with 24 points, 12 rebounds and four assists as a matchup of Division I prospects lived up to the billing.

"He’s a great player,” Kaufman said. "He’s gonna go to college to play basketball so it’s fun playing against him but at the end of the day it’s Silver Creek vs. Heritage Hills so I’m glad we got the win.”

Kaufman was outstanding throughout the game. He and Northern combined for 17 in the fourth quarter and teamed up on a key bucket during the rally.

The deficit was still five points, 65-60, with 1:01 to go when Kaufman drove baseline and kicked out to Northern, who faked, took one dribble and drilled another triple.

"They were collapsing on [Kaufman] and that led to some offensive rebound and everyone was crashing the glass and hitting open shots,” Northern said. "He started hot and ended hot, we knew that throughout the game if we kept feeding him the ball he would keep producing.”

Northern attacked again, this time from the right wing, to cut it to 66-65 with 22 seconds left. The Dragons trapped in the corner and Kaufman was a step quicker to a pass intended for Murray Becher, drawing a whistle with 16 seconds on the clock.

Kaufman missed the front end of the one-and-one but Heritage Hills’ Sigler returned the favor at the other end with two misses.

Kaufman got the ball on the baseline against 6-foot-9 Blake Sisley and Sisley was whistled for a foul on attempt to swipe it away as Kaufman went by.

Kaufman hit 1 of 2 double-bonus attempts to force overtime after Sim Scherry’s 3-pointer at the buzzer was no good.

The Dragons’ began overtime with a 5-0 run. Kaufman drove for two and then Northern connected on his third 3-pointer of the game after Trey Schoen hauled in an offensive rebound.

After Heritage Hills terrorized Creek on the offensive glass throughout the game, the Dragons were flipping that script in crunch time.

Nolan Gilbert, who finished with 11 points and six rebounds, followed up a Northern miss in the lane and knocked down two free throws. Northern converted a 3-point play to stretch the Dragons’ lead to 78-71.

Hoffman loved the play of his role players in this win, especially with Jacobi battling foul trouble that prevented him from getting in the flow of the game.

In addition to Gilbert’s contributions, Schoen had five points, three assists and a steal and Isaac Hinton had seven points. Taylor Betts converted a bucket in the second half as well.

Ultimately, the win came down to getting back to toughness, Kaufman said. Heritage Hills had 17 second-chance points after three quarters and didn’t get any in the fourth quarter.

"One of the things coach told us at halftime is we weren’t being tough enough. That’s a team we’ll play in regional and they’re going to give us their best game and we have to be tougher. Later in the game, we did that,” Kaufman said.

Coach Nate Hawkins thought his team played well enough to win, but the Dragons pulled through in crunch time.

"They’re a great team, we’re a great team. Somebody’s gotta win. We were in great position to win in regulation. We had one costly turnover and missed a couple turnovers. Those are things that happen in December. We’re going to grow from this. All the issues we had are very fixable,” Hawkins said.

The Patriots won the rebounding battle 38-33 and scored 21 points off Silver Creek turnovers.