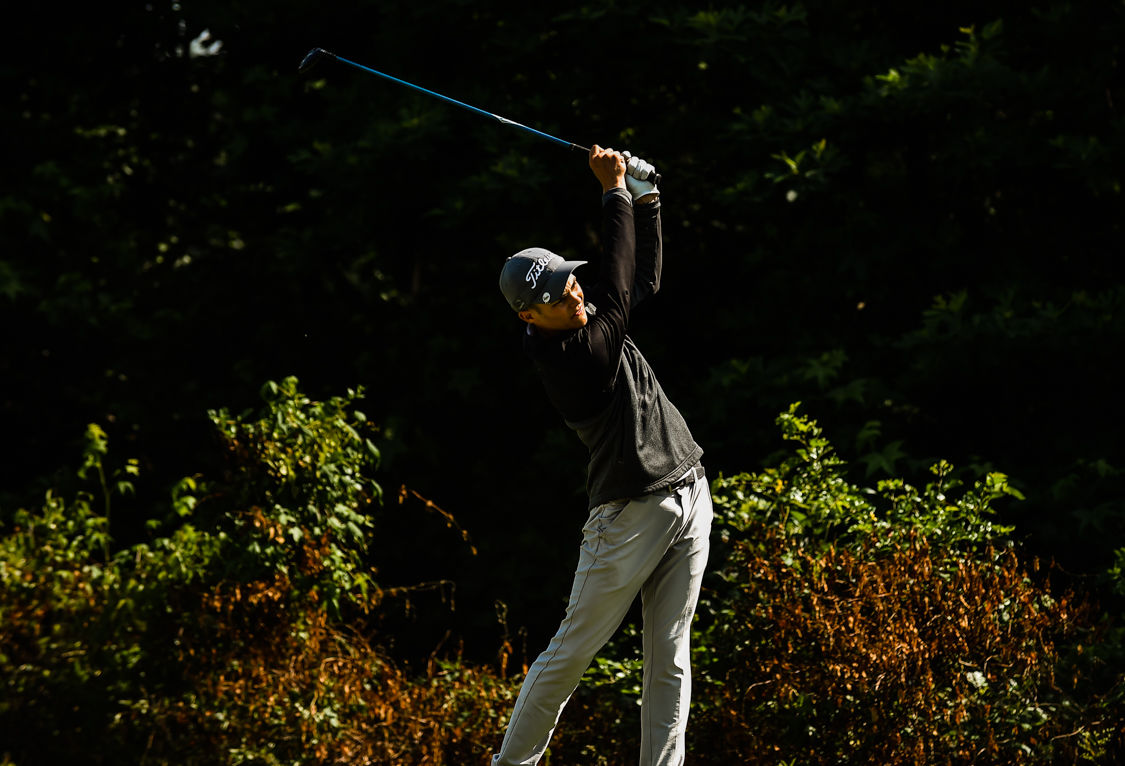 Floyd Central’s Christian McIntosh drives from the tee box during sectional play two years ago. The senior will try to lead the Highlanders back to the IHSAA State Finals. 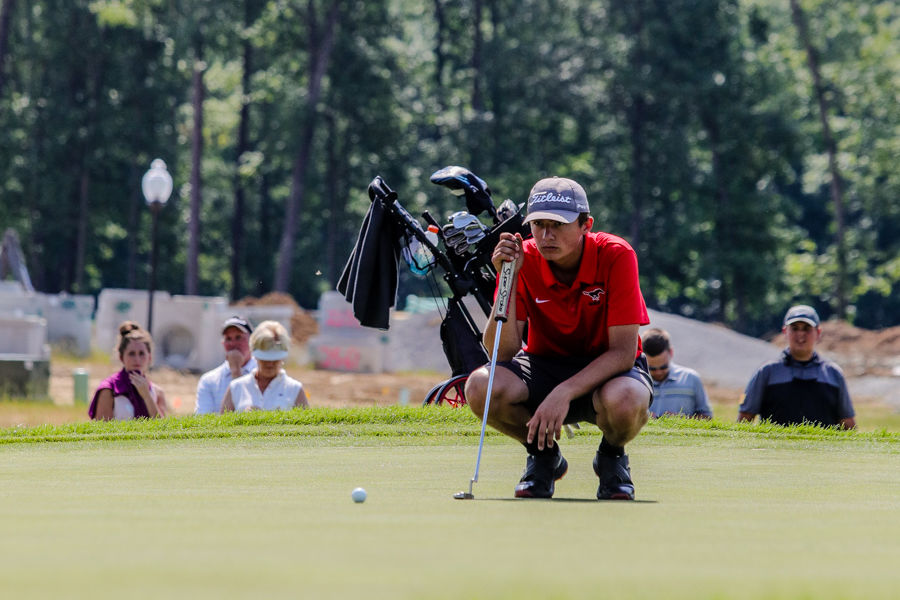 Henryville’s Westin Allen reads a green during the Providence Regional tournament two years ago at Champions Pointe Golf Course. Allen, now a senior, will lead the Hornets this season. 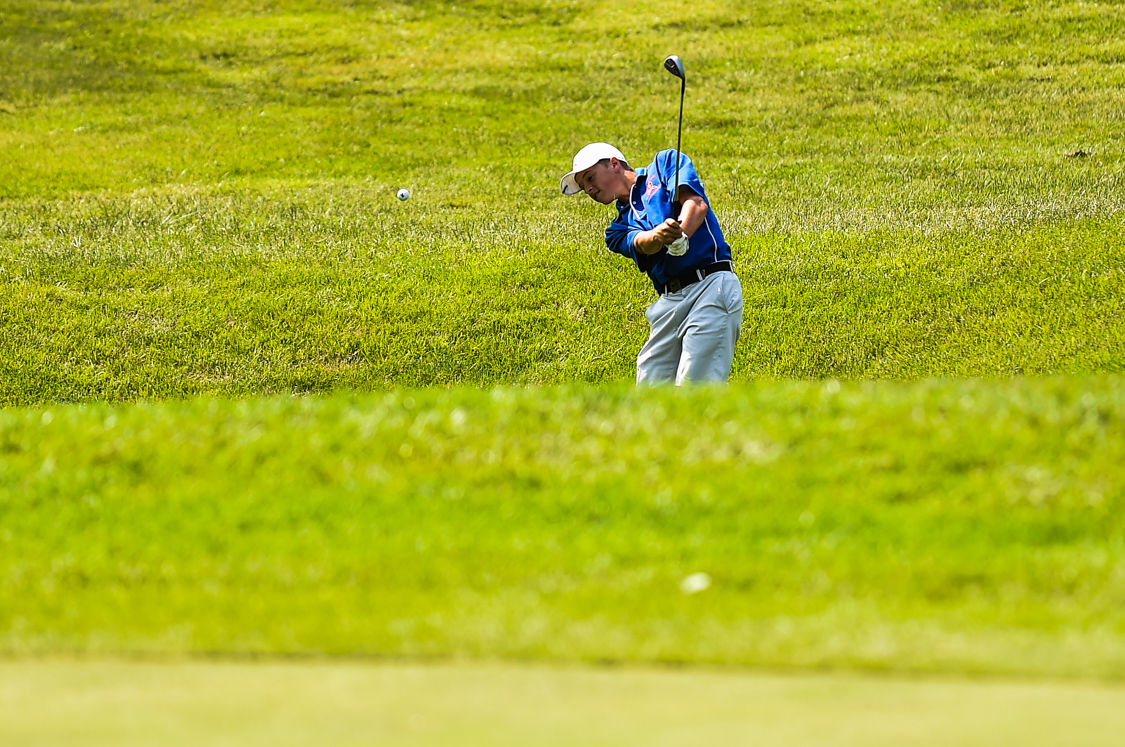 Silver Creek’s Carter Smith finds the green off a short chip during the Providence Sectional two years ago at Champions Pointe. 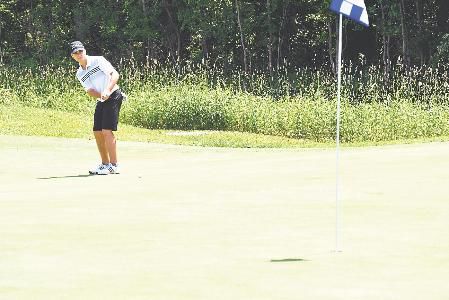 Floyd Central’s Judson Dukes putts for a birdie on the par-3 No. 15 at Prairie View Golf Club in Carmel. Dukes hopes to help the Highlanders return to the IHSAA State Finals this season. 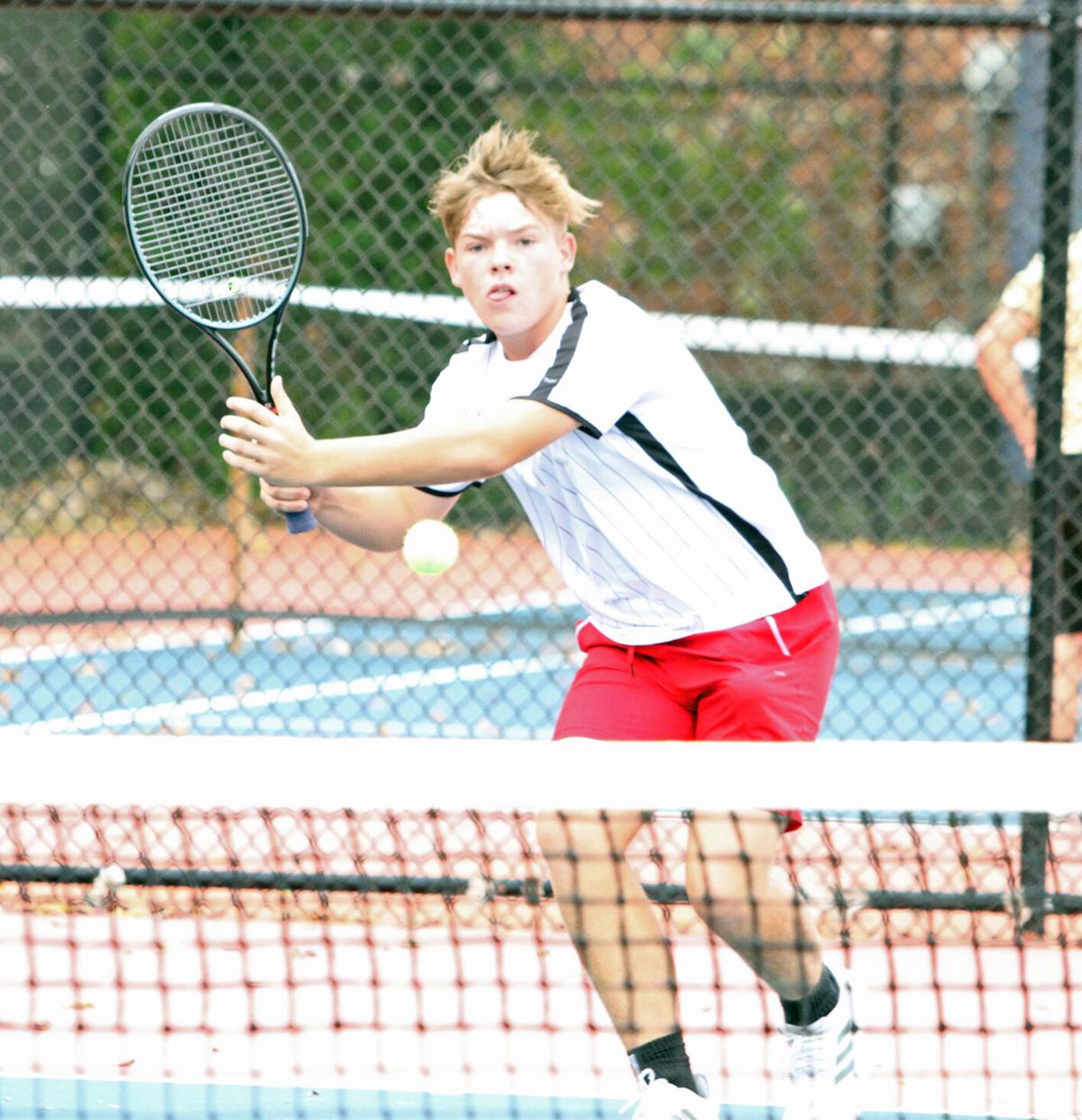 Borden’s A.J. Agnew played tennis in the fall and basketball in the winter. During the spring he’ll play baseball and golf for the Braves. 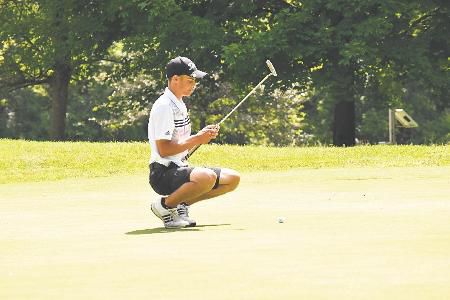 Christian McIntosh evaluates the lines on the putting green Tuesday at Prairie View Golf Club in Carmel on June 11, 2019.

For the first time in two years, after losing last season to the coronavirus pandemic, area golfers are ready to tee off around the state.

With that in mind, let’s take a quick look at five area golfers to watch this season.

The sophomore, who is one of the top players in the state in his age group, didn’t get a chance to show off his skills last year. He will this spring.

Agnew will be busy, though, as he’s also playing for the Braves’ baseball team.

By June, he could be one of the top contenders for the sectional title.

The senior was the team’s No. 1 player and earned a regional berth two years ago as a sophomore. He shot a very solid 78 at the Providence Regional.

Allen, who was a second-team News and Tribune All-Area selection in 2019, will look to build off of that this spring.

The senior was the team’s No. 4 player in its sectional lineup two years ago, when the Highlanders captured their third straight title.

Dukes shot an 80 at the regional before tying with teammate Christian McIntosh for 49th at the IHSAA State Finals. He shot 78 and 82 at Carmel’s Prairie View Golf Club to help Floyd finish in a tie for seventh-place on his way to earning first-team All-Area honors.

The senior was the team’s No. 1 player in the Highlanders’ sectional and regional lineups two years ago. He took third at the Providence Sectional in 2019, shooting an even-par 72. He followed that up with a 77 at the Providence Regional, helping Floyd to a runner-up finish.

At the IHSAA State Finals, McIntosh shot a 4-over 76 in the first round before carding an 84 in the second to finish in a tie for 49th with Dukes. Like his teammate, McIntosh also earned first-team All-Area honors.

Two years ago, as a freshman, Smith was the Dragons’ No. 1 player. He was the individual runner-up while leading Creek to its third straight Mid-Southern Conference title. A few weeks later he shot a 79 at the sectional, where the Dragons finished two shots shy of a regional berth.

The junior, who was a third-team All-Area pick in 2019, should help Silver Creek return to the top of the MSC and the regional, if not more.

Now, let’s take a quick look at each area team below.

• 2019: Finished ninth at the Providence Sectional.

• OUTLOOK: Smith, who was the No. 1 player in the Braves’ sectional lineup two years ago, returns. The Braves will be bolstered by a pair of newcomers. “This year we have some big incoming help from the sophomore class that didn’t have the opportunity to help us last year due to no season/COVID,” Potts said. “Two consistent scores we should be able to count on this year will be coming from A.J. Agnew and Branson Wagoner.”

• POTTS SAYS: “My assistant coach (Trevor Wagoner) and I have pretty high expectations for this upcoming season. This team has the potential to be the best we’ve had since we’ve taken the reigns coaching for Borden. We are hoping to contend with the top spots in our invitationals as well as have success within our weekly matches!”

• OUTLOOK: The Pirates return Martens, who was the team’s No. 2 player at sectional two years ago. Gillooly is back after earning MSC honorable mention as a freshman.

• TOLLIVER SAYS: “Overall, as it appears now, we should be able to put up our best team scores in several years. On top of that, I am expecting a really fun season. The guys we have are good kids, have a desire to get better and I am looking forward to watching them put the parts of their games together.”

• OUTLOOK: The Warriors don't return any of the players from their sectional lineup from two years ago.

• MARSH SAYS: “This season we are looking to build a strong foundation for our golf team. Our players have a lot of athleticism and a fierce drive to succeed in the sport. They are all relatively new to the sport, but are on track to become well-established golfers by the end of the season. I have already seen great improvements, and I am certain I will see even more as each player acquires a complete season under his belt."

• OUTLOOK: The Generals look to improve on their sectional finish from two years ago.

• OUTLOOK: The Highlanders return two (McIntosh, Dukes) of their top four players from their sectional lineup two years ago. Howell also has a good deal of experience. All three will try to help Floyd make a third consecutive trip to the IHSAA State Finals.

• EADES SAYS: “We are very excited simply to have an opportunity to play competitive golf again this year! After missing out on a potential third straight trip to the State Finals our upperclassmen are very much looking forward to a chance to return to Prairie View (Golf Club). We have a few seniors that have been working on their game over the past 18 months, as well as a good mix of freshman and sophomores who will be competing for most likely our fourth and fifth spots in the lineup. This competitiveness throughout our team, I feel like, will help us out come postseason time and prepare us for another run at State!”

• 2019: Finished fourth at the Madison Sectional.

• OUTLOOK: The Hornets return their top two players (Allen, Davidson) from their sectional lineup from two years ago.

• EMBRY SAYS: “Westin and Sam are both good, experienced players. We’ll be counting on them for good scores and leadership. Until we practice a bit more and begin matches, it’s difficult to set expectations for the others. We’re hopeful they’ll card competitive scores. After a few weeks, we’ll be able to tell what we have. As always, our priority will be to represent our community, school and selves in a high-character manner and improve our golf skills throughout the season. I’m looking forward to coaching this group!”

• 2019: Finished sixth at the Providence Sectional.

• OUTLOOK: The Red Devils return their Nos. 3-5 players from their sectional lineup from two years ago. Leading the way will be Williams, who shot 84 at the sectional in 2019. The other four spots are up for grabs, according to Corum.

• CORUM SAYS: “The outlook for this season is for Charley to advance to regionals as an individual and for the other team members to improve their games.”

• OUTLOOK: The Bulldogs return two players from their sectional lineup from two years ago in Crum and Knoy. Crum shot 85 at sectional then while Knoy carded an 86.

• BELCHER SAYS: “We only have four guys this year, so we will have to be at our best every time. The bad news is that we don’t have that fifth player to rely on if someone has a bad day. The good news is that each guy’s score is going to count, so there is no giving up on the day. They have been working hard in the offseason and continue to improve every day. Hopefully we can be at our best at the right times this season and compete at a high level.”

• 2019: Finished ninth at the Madison Sectional.

• OUTLOOK: Curry, who was in the sectional lineup two years ago, is the team’s lone player right now. “We are trying to get a few more players,” Diaz said.

• 2019: Seventh at the Providence Sectional.

• OUTLOOK: The Pioneers return two players (Beeler, Heldman) from their sectional lineup from two years ago.

• BEELER SAYS: ”Providence, like every other school in Indiana, is looking forward to getting back on the course after losing last season to the shutdown of the schools and sports programs by the COVID pandemic. Every season we expect to compete at the highest levels. As a small institution in a single-class sport not participating in conference play, sectional wins and advancement are always the goal. Our program continues to grow in numbers and we look for our upperclassmen to lead this season by continuing to foster our culture and passing it on to the underclassmen.”

• 2019: Finished fourth at the Providence Sectional.

• OUTLOOK: The Dragons return two players from their sectional lineup from two years ago in Smith, who was their No. 1, and Terry. Newcomers Graston and Hooe, who didn’t get to play last year due to COVID, and Coleman will bolster the team.

• GRASTON SAYS: “We have very high expectations this year. Overall we are young, but I like our spot. We ramped up our schedule, which includes the Spring Preview and the Hall of Fame (tournaments), so we are going to run into top-tier teams all season long. These guys are anxious for the starting gate to open and the opportunity to go out and try to add themselves to the conversation with the great programs like Floyd (Central) and the Indy-area teams. Hopefully the tough schedule and some hard work will help get them in that spot at some point this season.”