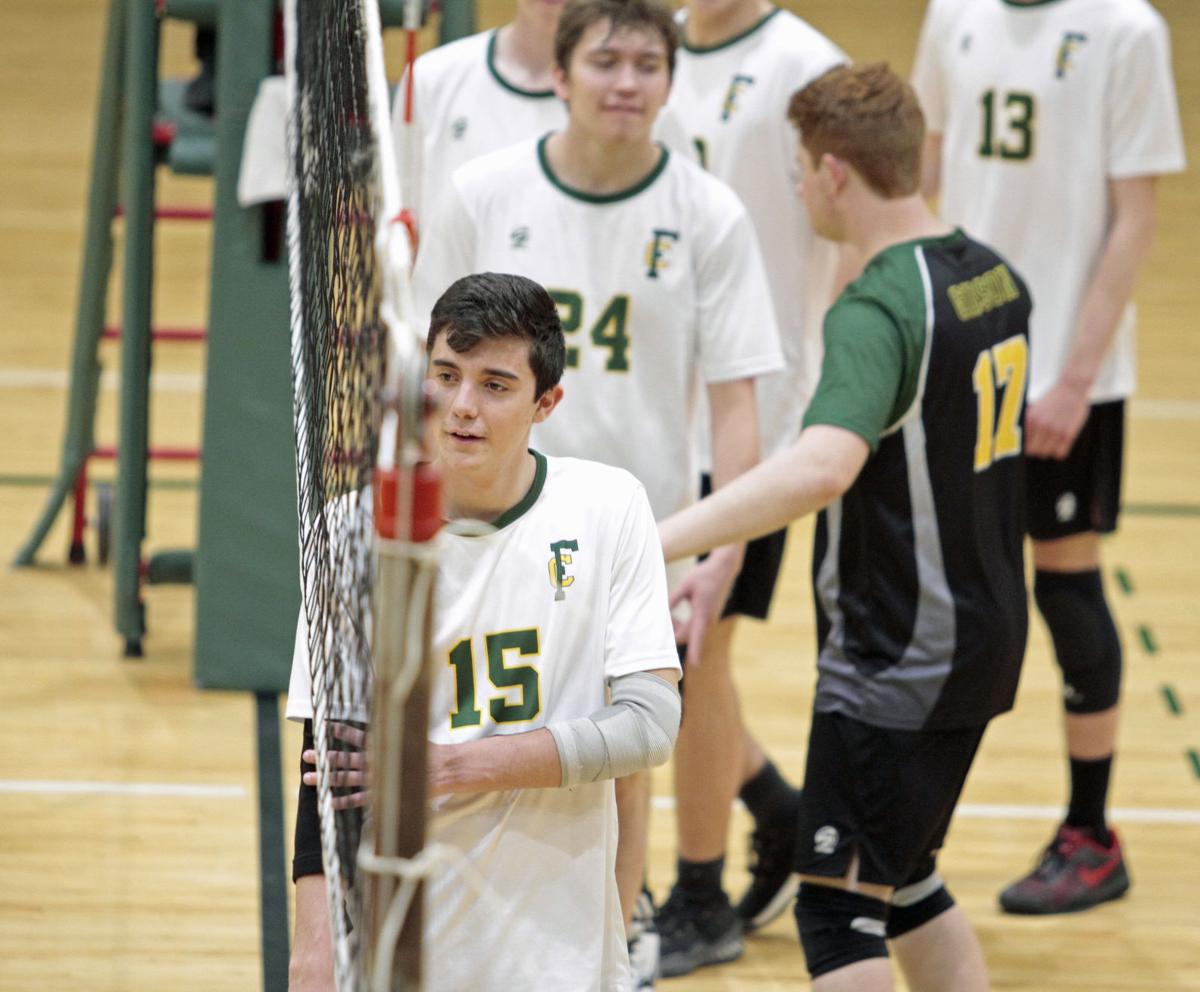 Floyd Central senior Mason Gamero, who is in his fourth year as a member of the school's club volleyball team, leads the Highlanders through the post-game handshake line after a recent match. The Highlanders were the lone local squad for awhile, but this spring they've have a lot more company. 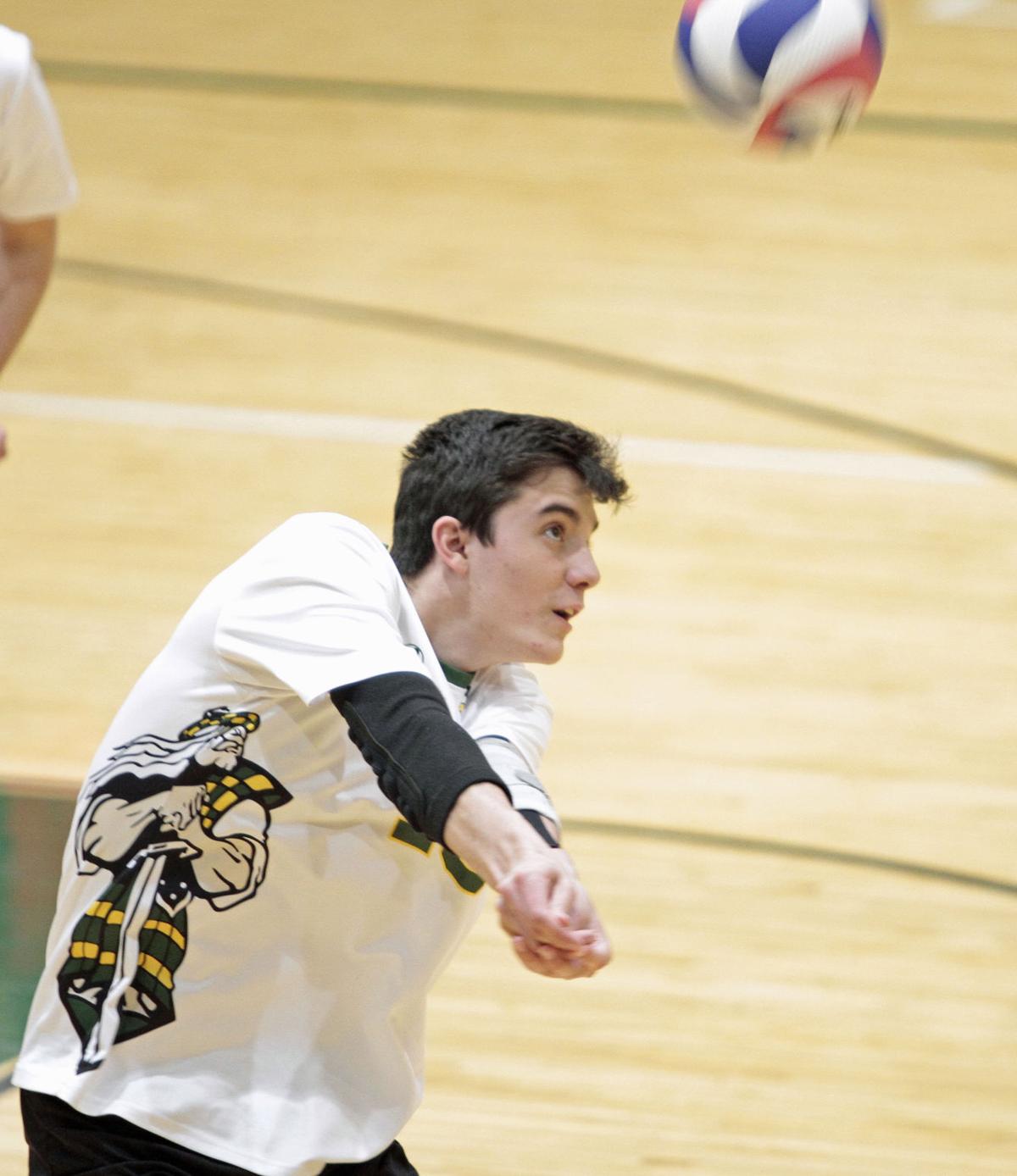 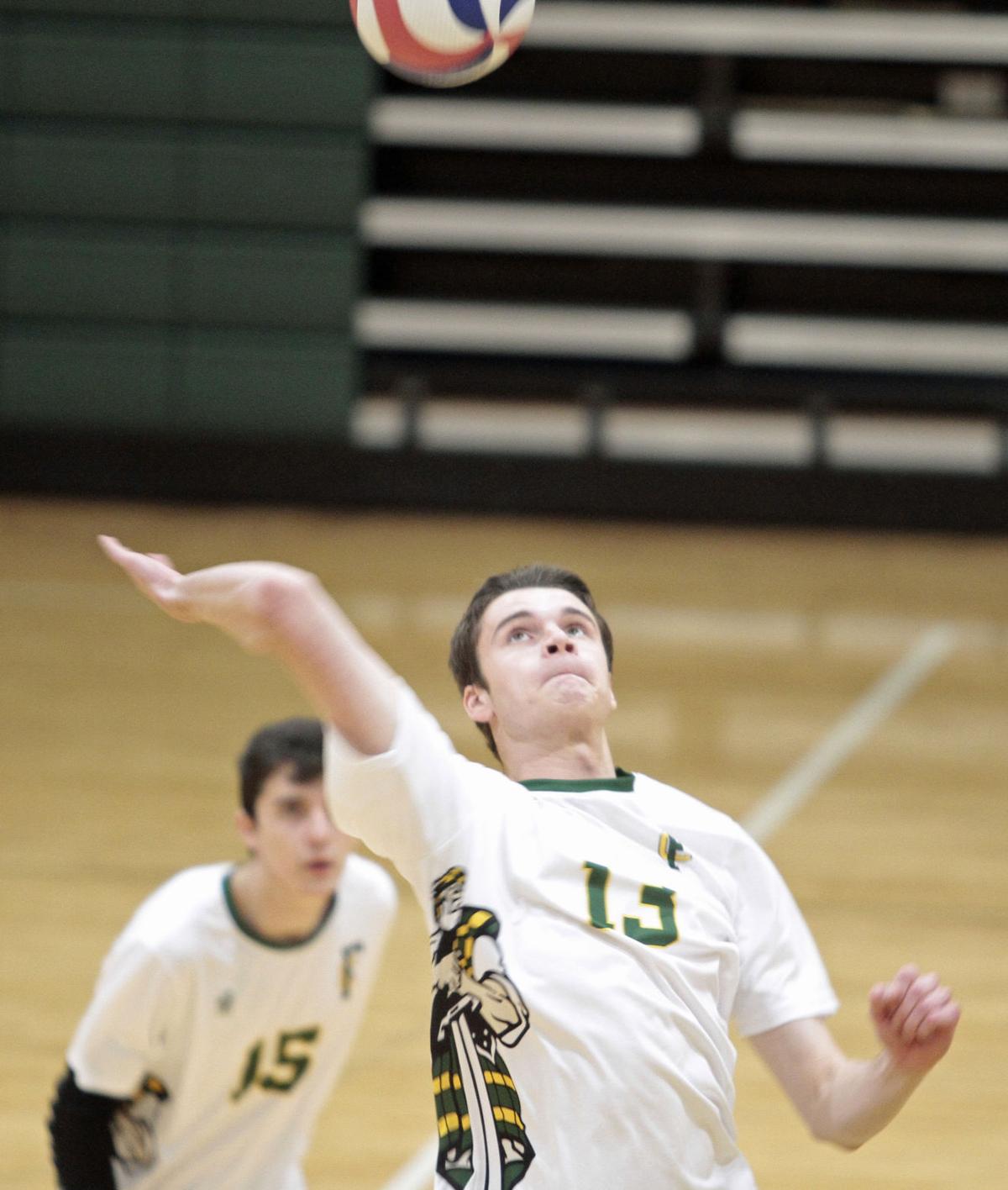 Floyd Central junior Drew Cromwell goes up for a spike during a recent match. 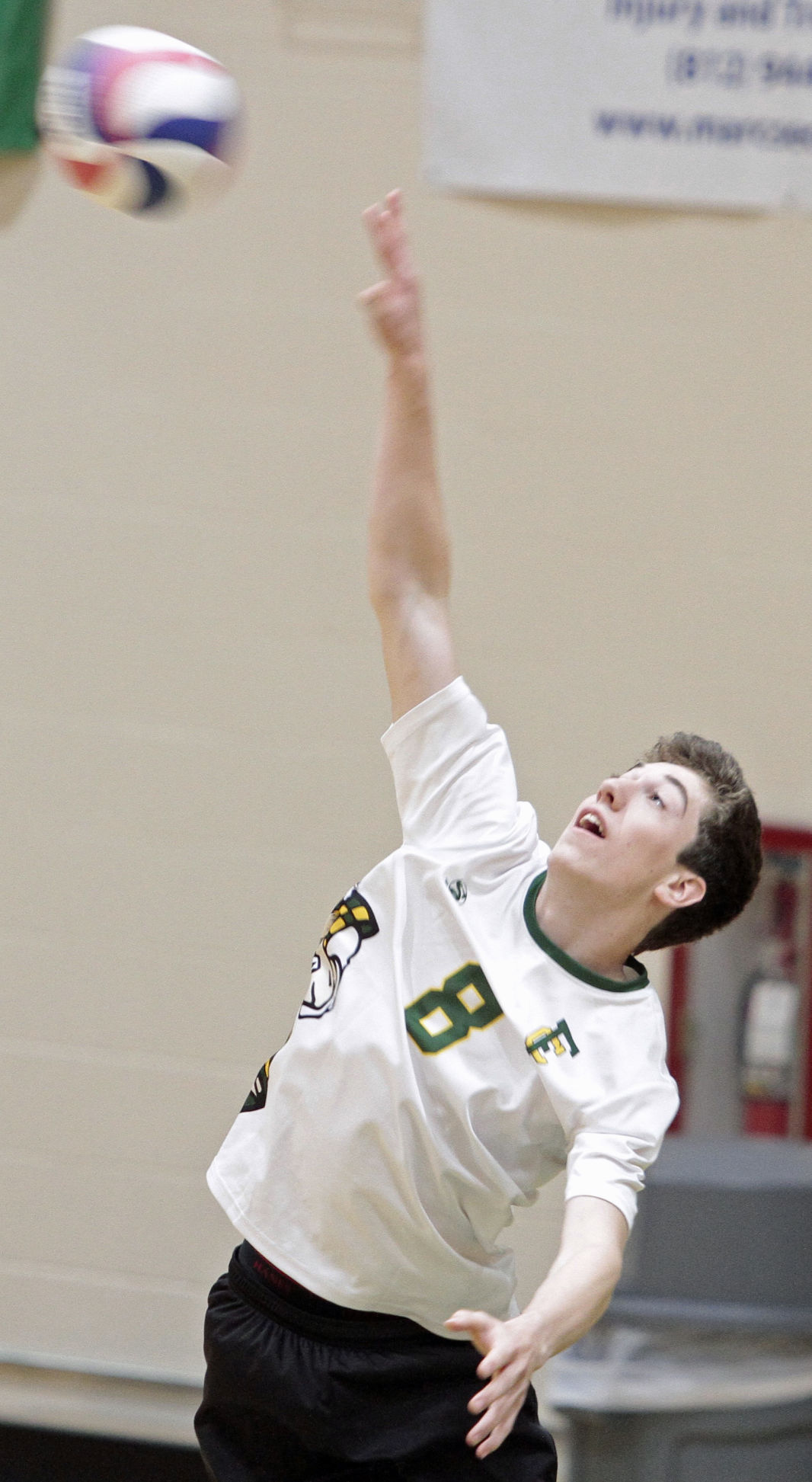 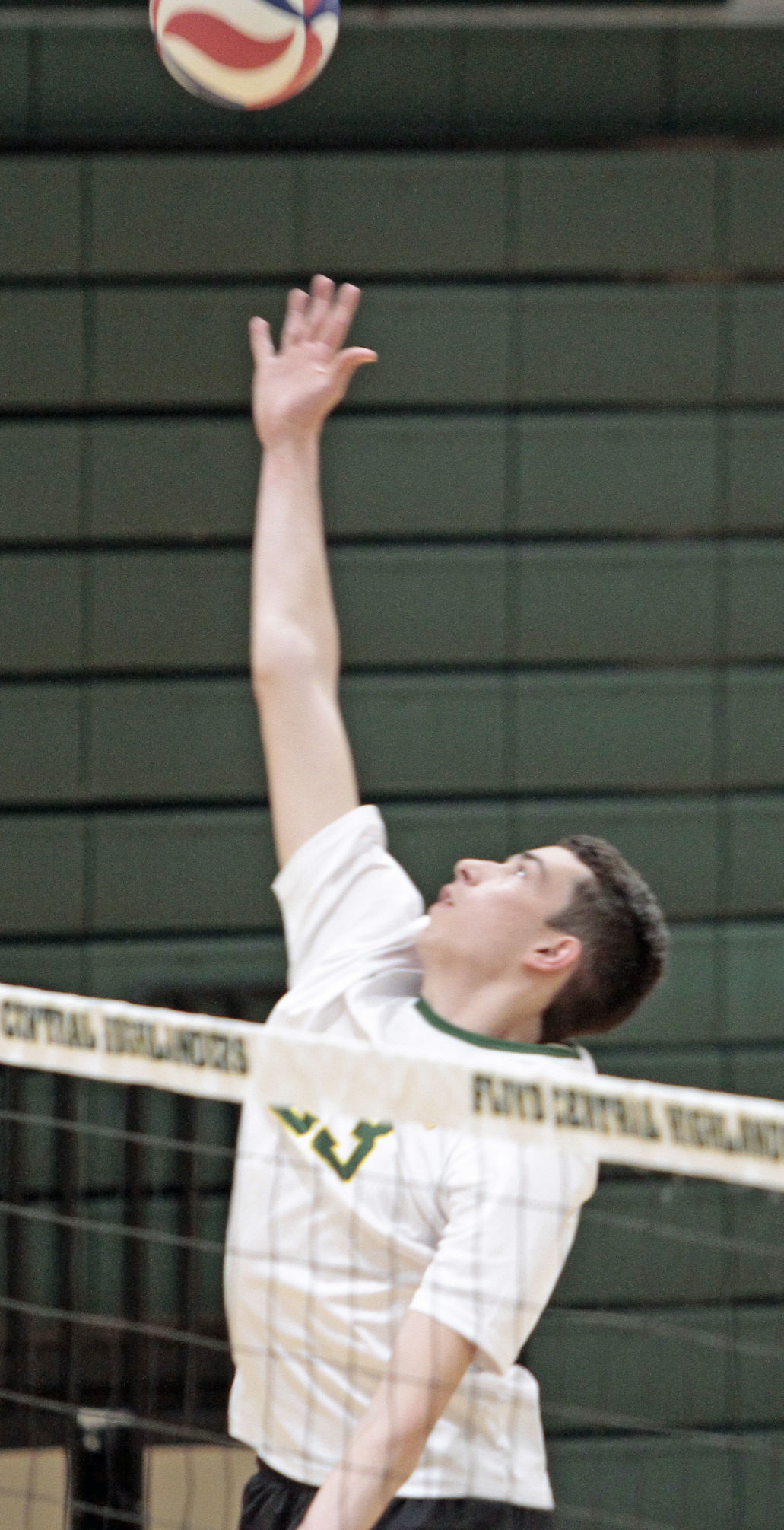 Floyd Central senior Mason Gamero, who is in his fourth year as a member of the school's club volleyball team, leads the Highlanders through the post-game handshake line after a recent match. The Highlanders were the lone local squad for awhile, but this spring they've have a lot more company.

Floyd Central junior Drew Cromwell goes up for a spike during a recent match.

Southern Indiana has long been a hotbed for girls’ volleyball.

Over the last 30 years, four local schools — Christian Academy, Floyd Central, New Albany and Providence — have played in the IHSAA State Finals. Since 2012, the Warriors and Pioneers have each played in five state championship matches with Providence winning three titles and CAI one.

“I think girls’ volleyball has been so big around here the past few years, with a lot of teams being successful in the regular and postseason, I think the guys are starting to want to get in on the action,” Providence senior Joe Gryboski said.

It’s a trend that isn’t just local. According to the National Federation of State High School Associations, 24 states with nearly 2,500 schools had a boys’ volleyball team during the 2017-18 school year.

“It’s amazing all the new teams, it’s so exciting,” Floyd Central assistant coach Casey Gamero said. “It’s really great to see all the new programs, the new kids out there growing the sport. It’s a lot of joy. For me, it’s a great satisfaction. We started as the only school in Southern Indiana, but now it’s grown into so much more.”

Floyd Central is the most established, and most successful, local club to date. The Highlanders have been ranked in the Top 10 of the Indiana Boys’ Volleyball Coaches Association's rankings most of this season and one of their seniors — Mason Gamero — recently signed to play NCAA Division I men’s volleyball for Purdue Fort Wayne. They, however, had a modest beginning in 2016.

“We had three club-players who wanted to play high school ball and they got asked to play for DeSales High School [in Louisville], and we just didn’t think that was the right thing to do, so at the very last minute we started our own program,” Casey Gamero, a former University of Louisville player and Mason's mother, explained. “We literally threw it together within 48 hours. We threw a team together, had tryouts and made a schedule — we winged it.”

The Highlanders had about 20 players that first season.

“I was surprised about the turnout our first year, how many boys came out,” Mason Gamero, one of those three aforementioned club players, said. “We just put it out in the announcements [at school] and had about 20 kids show up for the first tryout, which was basically practice.”

Many of the first-year programs have similar stories.

“There were a lot of questions going in, if we were going to be able to get a team, but we ended up with enough numbers to put six on a court,” Gryboski said. “One of our seniors [Austin Hughes] sent an email to the whole student body, saying any guy who wants to play volleyball can come out to practice and, 'We’ll just have fun from there.'”

While some teams have struggled to have enough players to field a team — Charlestown had to fold it early on this season due to injuries — the Highlanders are thriving. They have around 30 in the program, which includes varsity, JV and ‘C’ teams.

“That first year we had three kids that played club ball. This year we have seven or eight kids who play club ball, which starts in October and goes all the way until July,” Casey Gamero said. “The first year the commitment level was kind of iffy, they had travel basketball, or travel soccer, or this and that. But now the kids have kind of put all that to the side. It’s all about volleyball — ’When’s our next practice? When’s our next game?’”

Many, it seems, have caught volleyball fever.

“It’s a fun sport to play,” Gryboski said. “It’s kind of a big deal at Providence High School, so it’s fun to be able to play it instead of just watching it from the sidelines. We’ve had a lot of fun building this program this year and we’re hoping in the future we can improve our record against these local teams. We’ve got a lot of young talent coming up. It’s been a lot of fun this year.”

And not just for the players.

“It’s so much fun," said Rock Creek coach Jennifer Brown, who is also in charge of the school's successful girls' program. "It’s so much different than coaching girls because they really don’t know anything and they listen to everything that you say. From Day One when we played Silver Creek at the very beginning of the season, until now, it’s like a 90-percent improvement. It’s amazing to see the progress they’ve made.”

In most cases it's been because of practice and repetition — "We spend all of our time working on passing and fundamentals, instead of hitting and serving like they probably want to," Brown said — but in other cases it may be due to osmosis.

“We’ve got a couple of seniors who their sister plays, or their best friend’s sister plays and they say, ‘Oh, I want to play that.’ And they have, and they’ve done really well with it,” said Providence coach Brandy Denning, who is an assistant coach for the school’s girls’ team. “One of our players, Sam Kruer, in practice one day he was top-spin serving and our assistant coach is like, ‘Who taught you how to top-spin serve?’ And he was like, ‘Oh, I just looked at [former girls' standout] Marissa Hornung when she was here and that’s what she did.’”

FUTURE OF THE SPORT

Like some club sports, there has been a grassroots movement to make boys’ volleyball an IHSAA-sanctioned sport. However a proposal to reduce the percentage of member schools that must be participating in a sport before a state tourney series, from 50 percent to 30, failed to receive enough support at the recent IHSAA Board of Directors meeting.

Still, it's hard to deny the sport is growing.

“I think it’ll continue, definitely in this Southern Indiana region," Denning said. "It’s going to be a hotbed. I hear that New Albany might be trying to form a team next year, so that would be another school, a big 4A school."

Beginning this weekend 47 teams — 16 of which are in the South Region — will compete in the IBVCA state tournament. Floyd Central will host one of the regionals Saturday at Highland Hills Middle School.