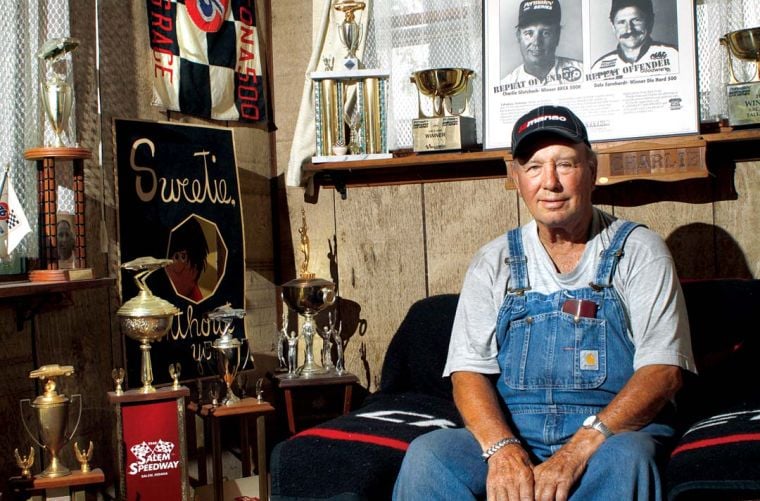 Former NASCAR driver Charlie Glotzbach poses for a picture in a room filled with trophies from his 40-year career. Glotzbach lives in Jeffersonville. 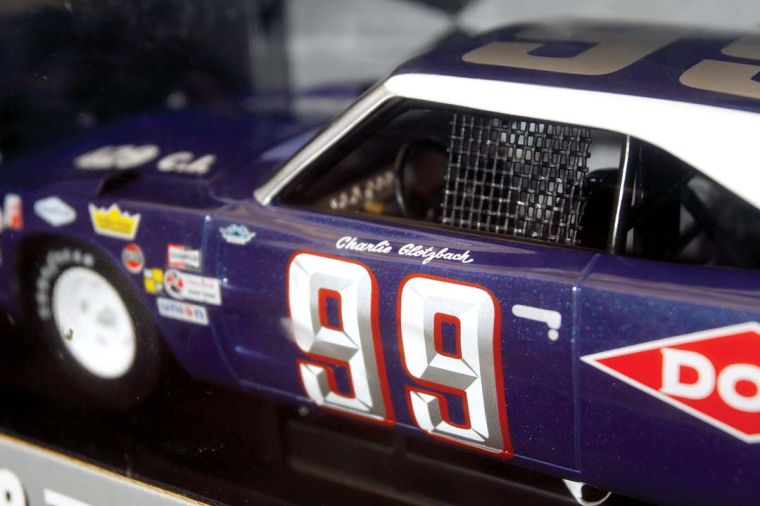 A replica of the car Glotzbach would have driven in the inaugural race at Talladega is one of several replicas he keeps in his trophy room. Glotzbach won the poll for the race, but due to the concerns over the racing surface most drivers, including Glotzbach, refused to race. 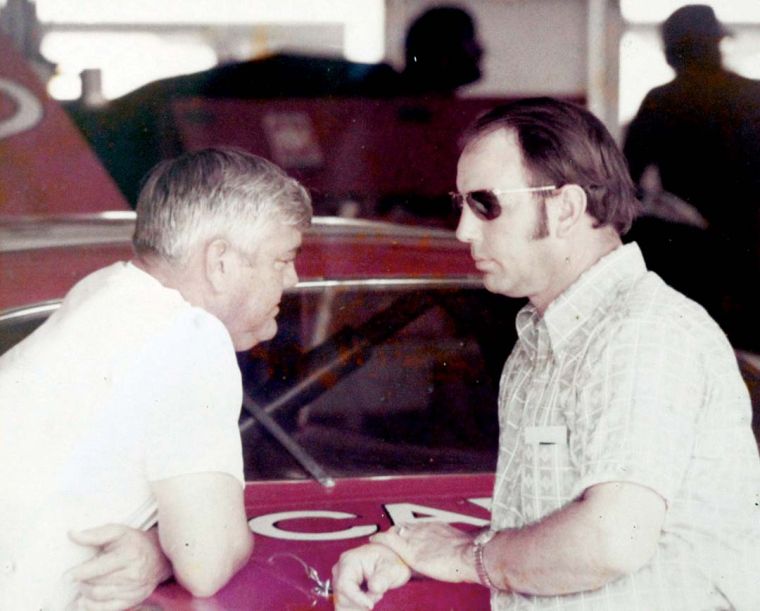 Charlie Glotzbach, right, talks with NASCAR legend Junior Johnson at a race in 1971. Glotzbach won at Bristol that year, setting a track record with a winning speed of 101.074 mph. The record still stands.

Former NASCAR driver Charlie Glotzbach poses for a picture in a room filled with trophies from his 40-year career. Glotzbach lives in Jeffersonville.

A replica of the car Glotzbach would have driven in the inaugural race at Talladega is one of several replicas he keeps in his trophy room. Glotzbach won the poll for the race, but due to the concerns over the racing surface most drivers, including Glotzbach, refused to race.

Charlie Glotzbach, right, talks with NASCAR legend Junior Johnson at a race in 1971. Glotzbach won at Bristol that year, setting a track record with a winning speed of 101.074 mph. The record still stands.

Consider Charlie Glotzbach one of the fortunate Southern Indiana race car drivers to compete against the big boys of NASCAR.

Out of hundreds and hundreds of Southern Indiana racers, Glotzbach is one of the few drivers from the region to compete at stock-car racing’s top level: the Sprint Cup Series.

And he is thankful to have gotten the opportunity.

“I’m proud to have run in NASCAR,” the 73-year-old Jeffersonville resident said. “I was proud just to do it, but I’m also proud of the races I won. Plus I had a good percentage of finishing in the top five or top 10 of the races I ran.”

But Glotzbach, whose nickname was “Chargin’ Charlie” in his NASCAR days, did not participate in races to just help fill the field and try to get a top-10 finish.

While racing a part-time schedule during his Cup career, Glotzbach won four races and 12 poles in the late 1960s and early 1970s, when NASCAR’s top level was known as the Grand National division. In his 124 Cup starts, Glotzbach finished in the top five 38 times and the top 10 in 50 instances.

Along with his NASCAR exploits, Glotzbach primarily raced a part-time ARCA Racing Series schedule in his career. He has eight career ARCA victories and was named the ARCA Rookie of the Year in 1964.

“He was your typical hard-nosed racer. You knew when you raced him, you have to give him a lot of respect,” Frank Kimmel said about Glotzbach. “You knew if you tried to pass him, you needed to pass him clean and treat him with respect or you were going to have problems with him.”

Glotzbach thinks if he ran a full-time slate in NASCAR, he is fairly confident that he would have had more victories and top-five finishes.

Glotzbach’s name is etched in the record books at one of NASCAR’s most popular tracks.

One of Glotzbach’s four Cup victories came in the 1971 Volunteer 500 at Bristol (Tenn.) Motor Speedway. Driving a Chevrolet for NASCAR Hall of Fame driver and car owner Junior Johnson, Glotzbach set a track record for the fastest average speed during a Bristol race at 101.074 miles per hour. That mark still stands today.

The remarkable thing about that race was the caution flag did not wave once during the 500-lap event. Usually, a typical Bristol race will have at least 10 caution periods.

Glotzbach gives a couple of reasons why that particular Bristol race went caution-free.

“NASCAR didn’t throw the caution flag as much back then. Now, they throw it for anything,” Glotzbach said. “Plus drivers respected each other more back then than they do today.”

Another historic victory for Glotzbach came in 1970 when he won the Yankee 400 at Michigan International Speedway in a Dodge Daytona. That was the first-ever Cup race to use carburetor restrictor plates.

Glotzbach’s first Cup win came in the 1968 National 500 at Charlotte (N.C.) Motor Speedway. His second victory was in a Daytona 500 qualifying race in 1970 at Daytona International Speedway.

Glotzbach also was involved in one of NASCAR’s most controversial moments.

In September 1969, NASCAR was preparing to race its first Grand National race at the 2.66-mile Talladega (Ala.) Superspeedway. Glotzbach won the pole for the inaugural Talladega 500 by almost breaking the 200 mph barrier with a lap of 199.466 mph in a winged Dodge Daytona Charger.

But the Professional Drivers Association, a drivers’ union led by seven-time Cup champion Richard Petty, decided to boycott the race because it declared the race would be run in unsafe conditions. The PDA thought the speeds were too fast and most importantly the tires would wear out after running only a few laps because tire manufacturers Firestone and Goodyear failed to develop a tire compound that could withstand the high speeds for an extended amount of time.

Thirty-one drivers boycotted the race, including Glotzbach. Journeyman driver Richard Brickhouse replaced Glotzbach in his Dodge and won the race.

Glotzbach said the majority of the drivers who raced in the first Talladega 500 did not run their cars at full throttle.

“You couldn’t run five laps without the tires falling off,” Glotzbach said. “If you’re a racer, you want to run wide open. Somebody was going to get hurt, so we decided not to run.”

The last time Glotzbach competed in a race was in March 2010 in a 35-lap exhibition race at Bristol. But it was a race that Glotzbach wants to forget.

Larry Pearson, the son of NASCAR Hall of Famer David Pearson, spun out in Turn 2 and hit the wall. While sliding down the track, Pearson’s car got struck in the driver’s side door by Glotzbach.

Glotzbach suffered a broken sternum and fractured a bone in his lower back, while Pearson had a compound fracture of his left ankle and fractured his hip and right wrist.

Amazingly, it was the first time that Glotzbach, who started racing at the age of 16, has ever gotten injured in a race.

With the exception of some pain in his back, Glotzbach has made a full recovery from the accident.

“It still hurts in my back, but I’m getting better,” Glotzbach said. “I saw him spin and I thought he was going to hit the brakes and slow down going down the track. But he went too fast down the track and he didn’t put the brakes on in time. It was just one of those deals.”

Saturday, a NASCAR Cup race will be taking place an hour away from Glotzbach’s Jeffersonville home. Kentucky Speedway in Sparta, Ky., will be hosting its first-ever Sprint Cup race. Glotzbach is glad to see the 1 1/2-mile track finally get a Cup race and he wishes he had a chance to participate in it.

“I think it’s a good deal for the fans in this area. It gives them a good opportunity for them to drive only 65-70 miles to go see a race,” Glotzbach said. “(The track) has a good drawing area from Cincinnati and Indianapolis. I just wish I was racing there.”

* DAVID PEARSON: “The Silver Fox is what they called him. He took it easy until the end.”

* BOBBY ALLISON: “A hard racer. He raced every chance he got, that’s for sure.”

* NED JARRETT: “Ned was a gentleman.”

* LEE PETTY: “He started it back in the day and helped make NASCAR what it is.”

* DARRELL WALTRIP: “He likes to run his mouth a lot.”

* DALE INMAN: “Dale is a nice guy and a hard worker. He made Richard Petty.”