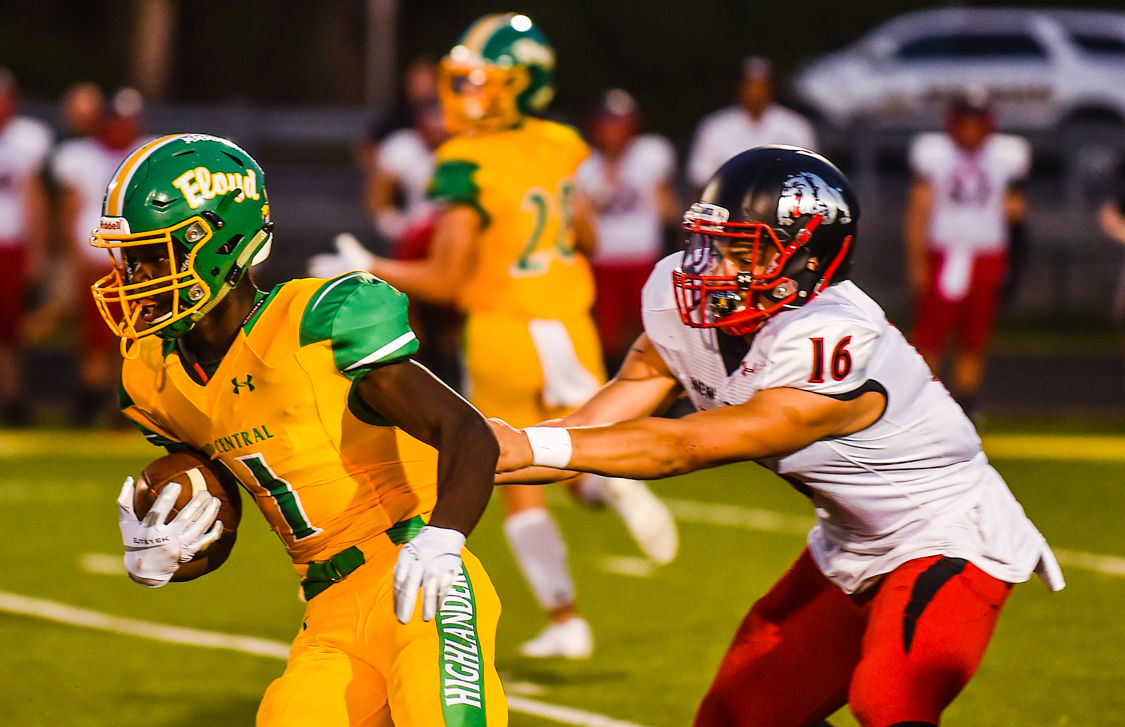 Floyd Central running back Wenkers Wright is snagged by New Albany's Kaden Callaway as he carries the ball up field during the Highlanders' match against the Bulldogs on Friday. 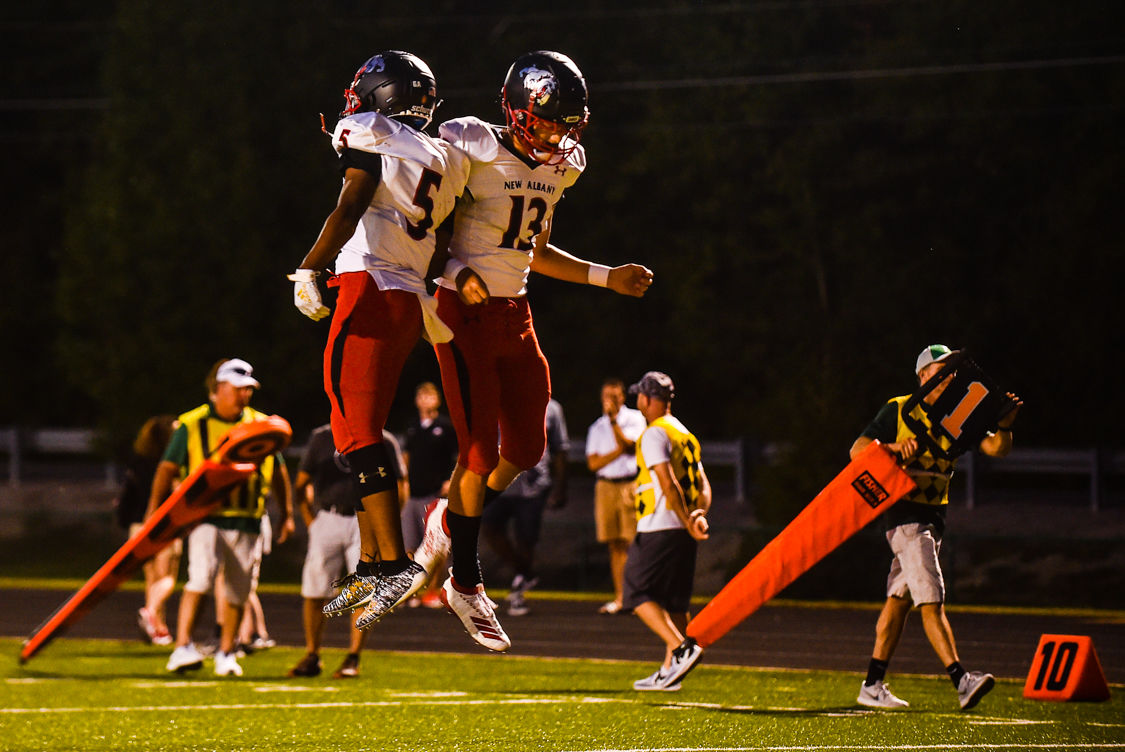 New Albany's DeJon Winburn (5) is met by wide receiver Malachai Peters after scoring a touchdown for the Bulldogs during Friday's game against Floyd Central. 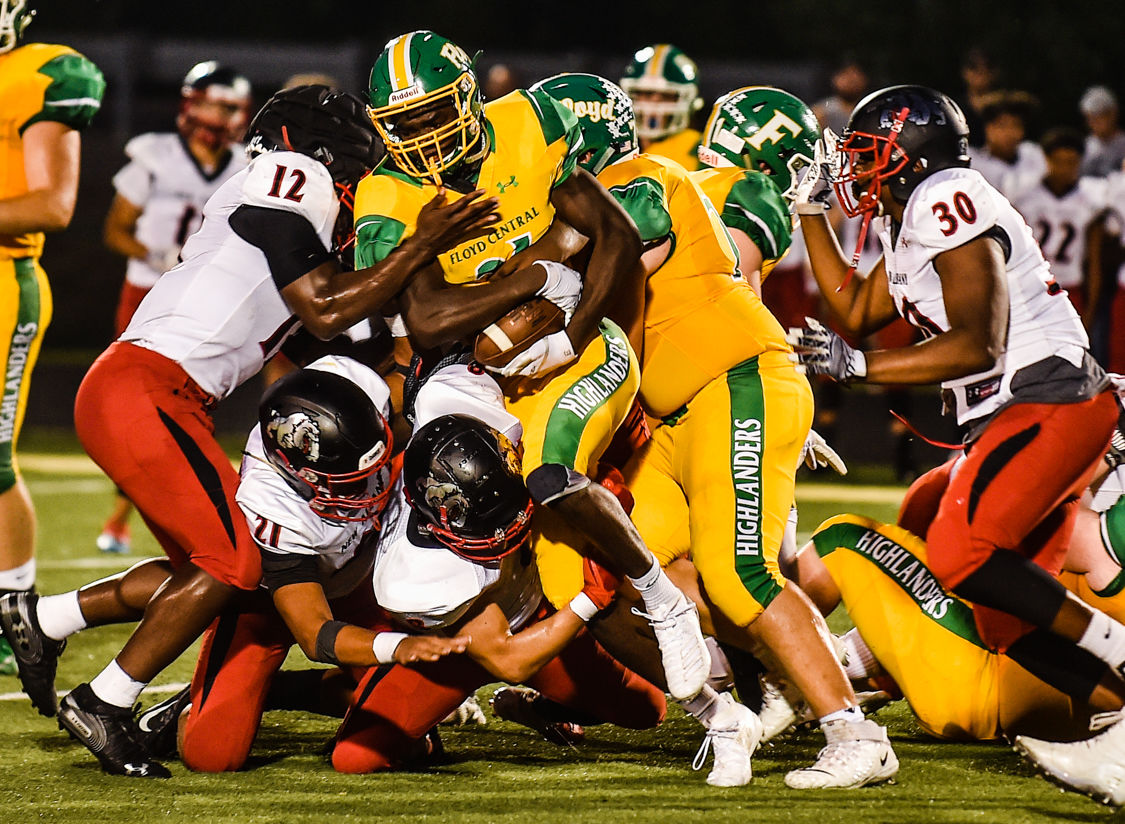 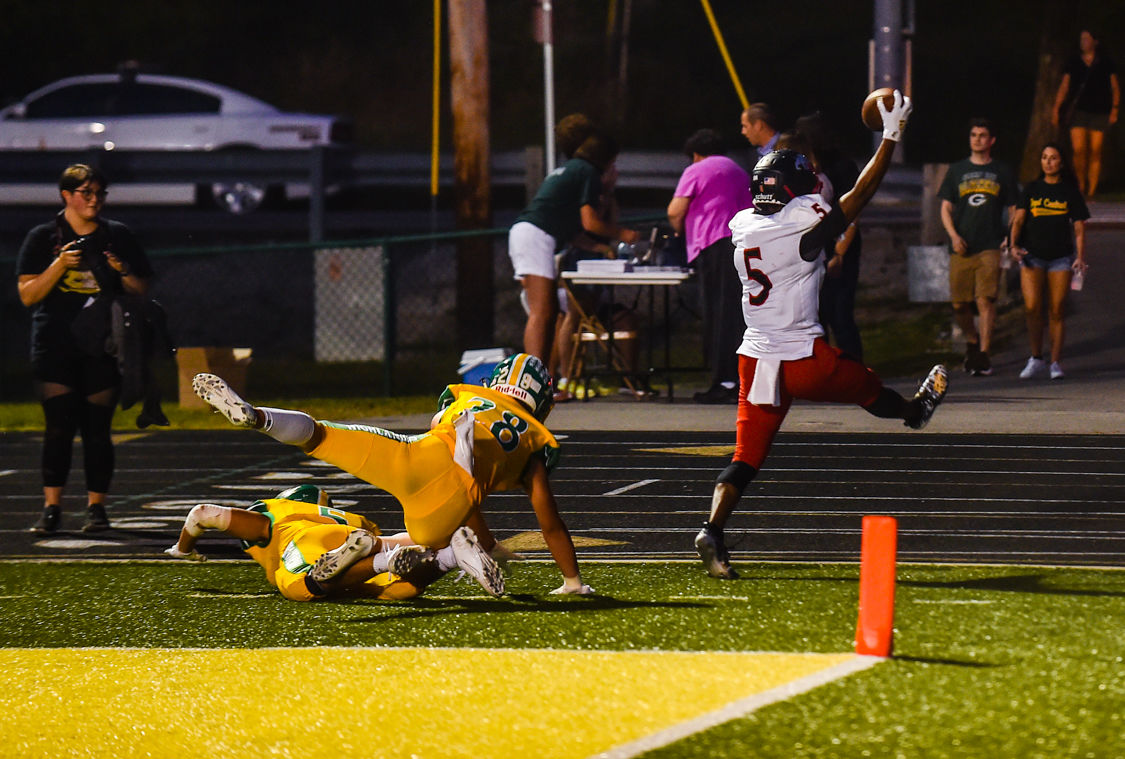 New Albany running back DeJon Winburn celebrates after a first quarter touchdown to put the Bulldogs ahead during Friday's game against Floyd Central. 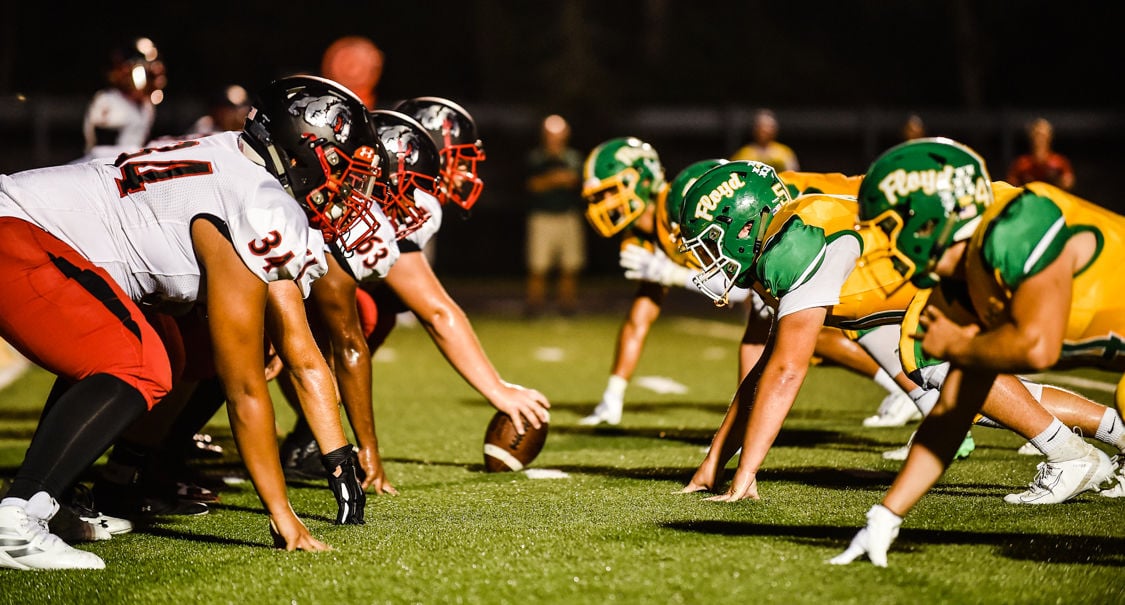 The Bulldog offensive line measures up with the Highlander defensive line before snapping the ball. 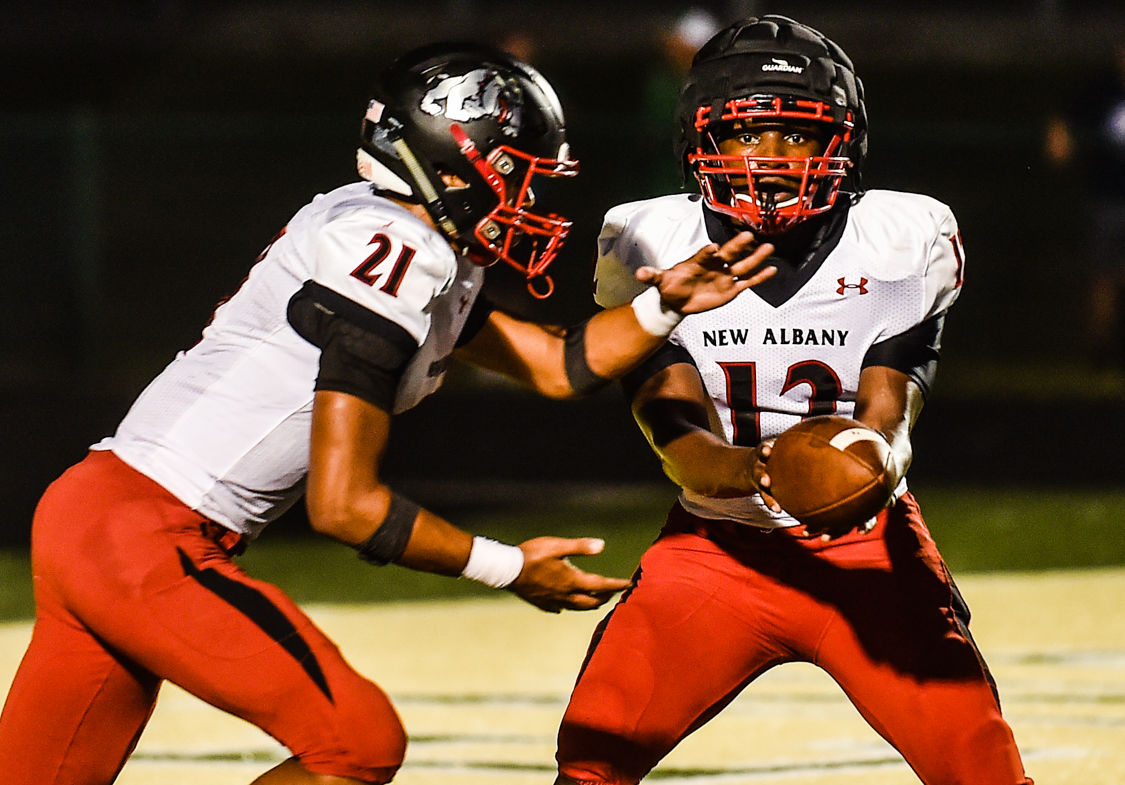 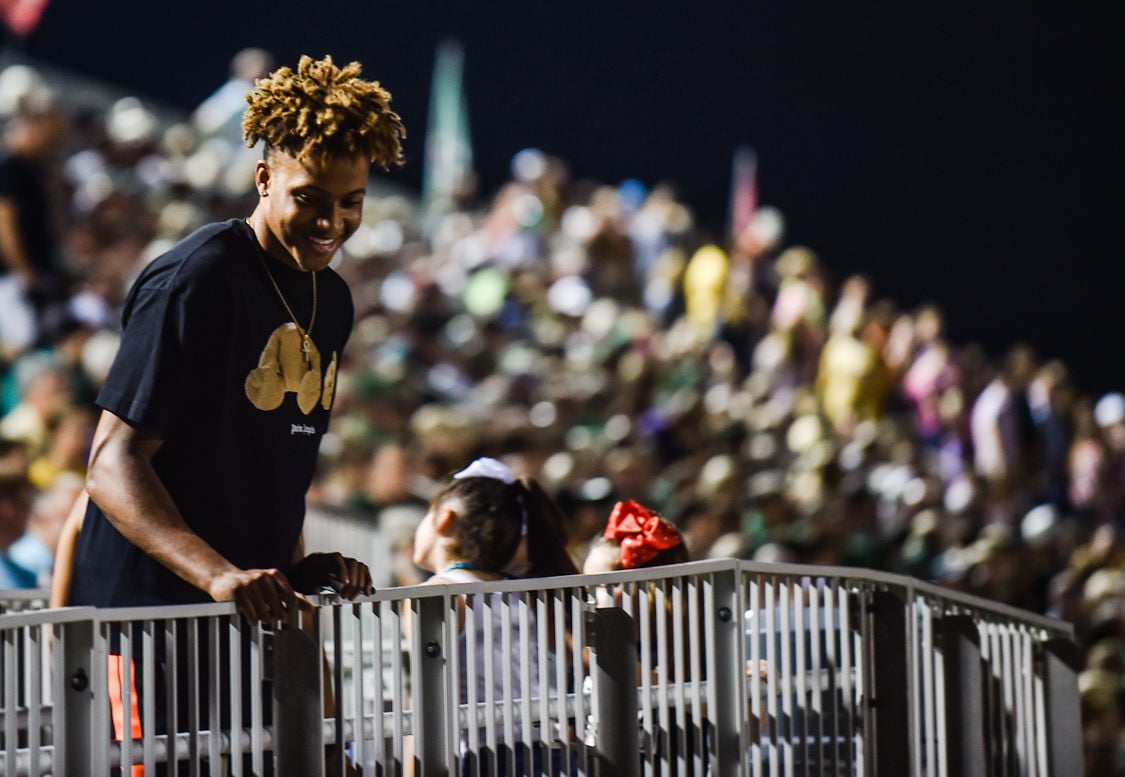 Floyd Central running back Wenkers Wright is snagged by New Albany's Kaden Callaway as he carries the ball up field during the Highlanders' match against the Bulldogs on Friday.

New Albany's DeJon Winburn (5) is met by wide receiver Malachai Peters after scoring a touchdown for the Bulldogs during Friday's game against Floyd Central.

New Albany running back DeJon Winburn celebrates after a first quarter touchdown to put the Bulldogs ahead during Friday's game against Floyd Central.

The Bulldog offensive line measures up with the Highlander defensive line before snapping the ball.

FLOYDS KNOBS — The Rusty Anchor is staying put. Although, it looked like it might be on the move for awhile Friday night.

Floyd Central junior Wenkers Wright ran for 362 yards and five touchdowns to help the host Highlanders to 50 unanswered points and a 50-14 win over archrival New Albany in a Hoosier Hills Conference game at Ron Weigleb Stadium.

“Down 14, we could’ve hit the panic button, but we didn’t. We stayed the course,” Highlanders coach James Bragg said. “We did a lot of motion [on offense] in the beginning to see how they’d adjust. Sometimes you’ve got to throw the gameplan out and go to the bread and butter that you want.”

And that was Wright, who sliced through the New Albany defense like a knife through warm butter.

“We ran a lot of inside zone like normal, we got Wenkers rolling,” Bragg said.

Wright had touchdown runs of 41, 82, 55, 44 and 60 yards to help the Highlanders hold onto the game’s traveling trophy (i.e. the Rusty Anchor) for another year.

“That was the biggest game of the season right there,” said Wright, who ran for 285 yards in the second half after gaining 77 on 10 carries in the first half. ”The anchor, it’s been four years now, the seniors of this year, they’ve won it for the past four years, so this is just huge for everybody. And next year we’re going to try to win it again.”

New Albany (1-3, 0-2), coming off back-to-back losses at Castle and Jeffersonville, started strong, scoring the first 14 points of the game. After the Dogs' defense stopped Floyd on fourth down on the first drive of the game, their offense came out strong. New Albany went 59 yards in nine plays, taking a 7-0 lead on Kyondre Winford's 16-yard touchdown pass to Dejon Winburn.

The Bulldogs' D then came up big again, forcing Floyd to go three-and-out on its second possession. Cole Hussung's punt pinned New Albany at its own 2, but it didn't matter, because three plays later Myles Johnson broke free for a 92-yard TD run. Just like that it was 14-0 Bulldogs, with former basketball star Romeo Langford looking on.

After that, though, it was all Highlanders.

A poor New Albany punt early in the second period gave Floyd the ball at the Bulldogs' 14. On the very next play quarterback Tristan Polk ran for a 14-yard touchdown.

On the Highlanders' next possession, Wright ran for 41 for his first TD. New Albany still led, though, 14-13 after blocking Hussung's point-after attempt. The Dogs' lead didn't last long.

Hussung hit a 36-yard field goal with 36 seconds left in the second quarter to put Floyd on top to stay, at 16-14.

The half ended with a pair of turnovers. New Albany fumbled on its first play from scrimmage following Hussung's kickoff, then Winford picked off Polk's pass into the end zone on first down.

New Albany got the ball to start the second half and tried answer, advancing to midfield before the drive stalled.

The Highlanders took over at their own 18 after a Bulldogs punt. On Floyd's first play from scrimmage, Wright busted free for an 82-yard touchdown. It was the first of five consecutive TDs for the Highlanders.

After New Albany went 3-and-out on its next possession, Wright did it again — running 55 yards for a score.

On Floyd's next possession Polk found Landon Deweese for a 46-yard TD.

“All of the sudden our passing game came together," Bragg said. "It’s something we’ve been practicing for a couple weeks. When we can throw the ball well it opens up more lanes in the run game and that’s what happened tonight.”

Wright ran for touchdowns of 44 and 60 yards on the Highlanders' next two possessions. The latter enacted the "mercy" rule and a running clock.

“This is a big win for us, it’s awesome," Bragg said. "Anytime that you can beat the team in the valley down there it’s huge."