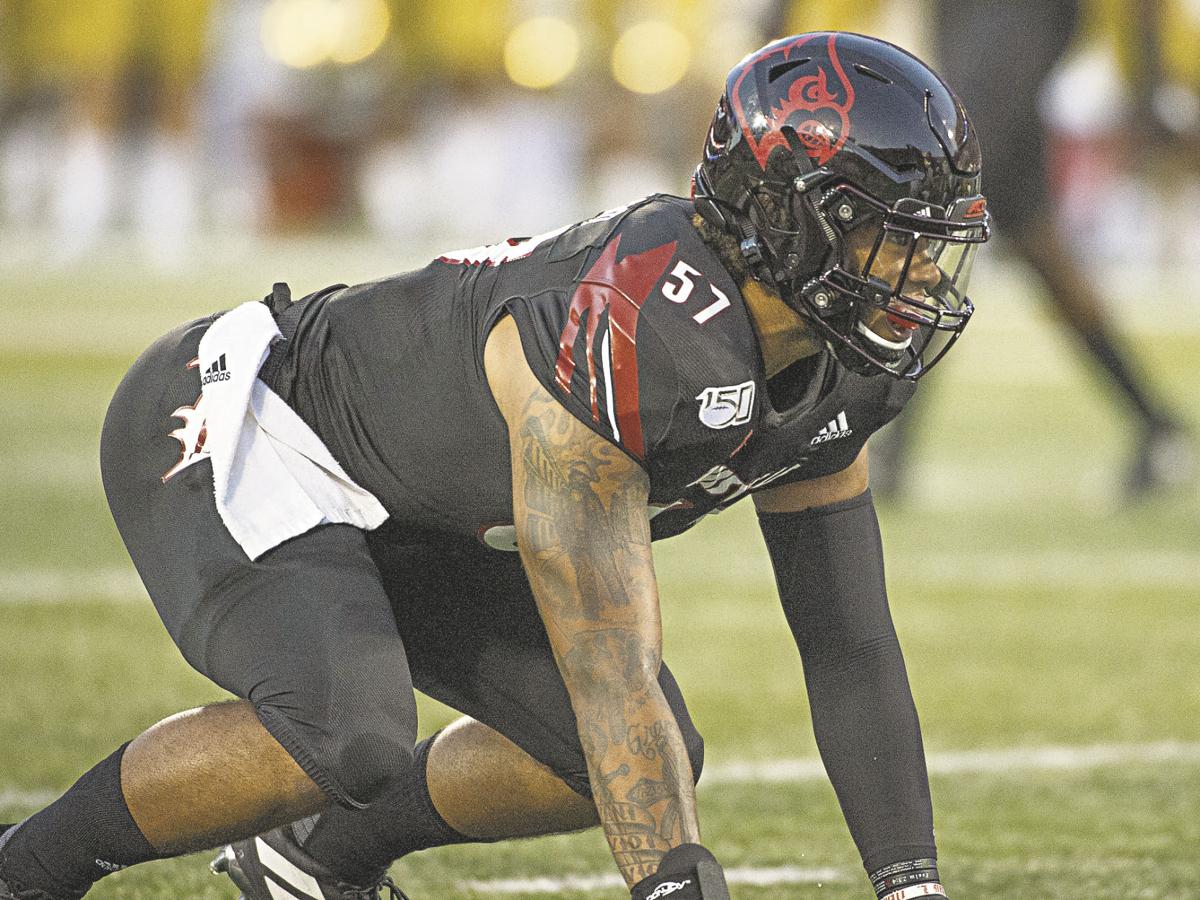 Louisville defensive lineman Dayna Kinnaird lines up during the Cardinals game against Notre Dame at Cardinal Stadium on Monday. Photo by Joe Ullrich 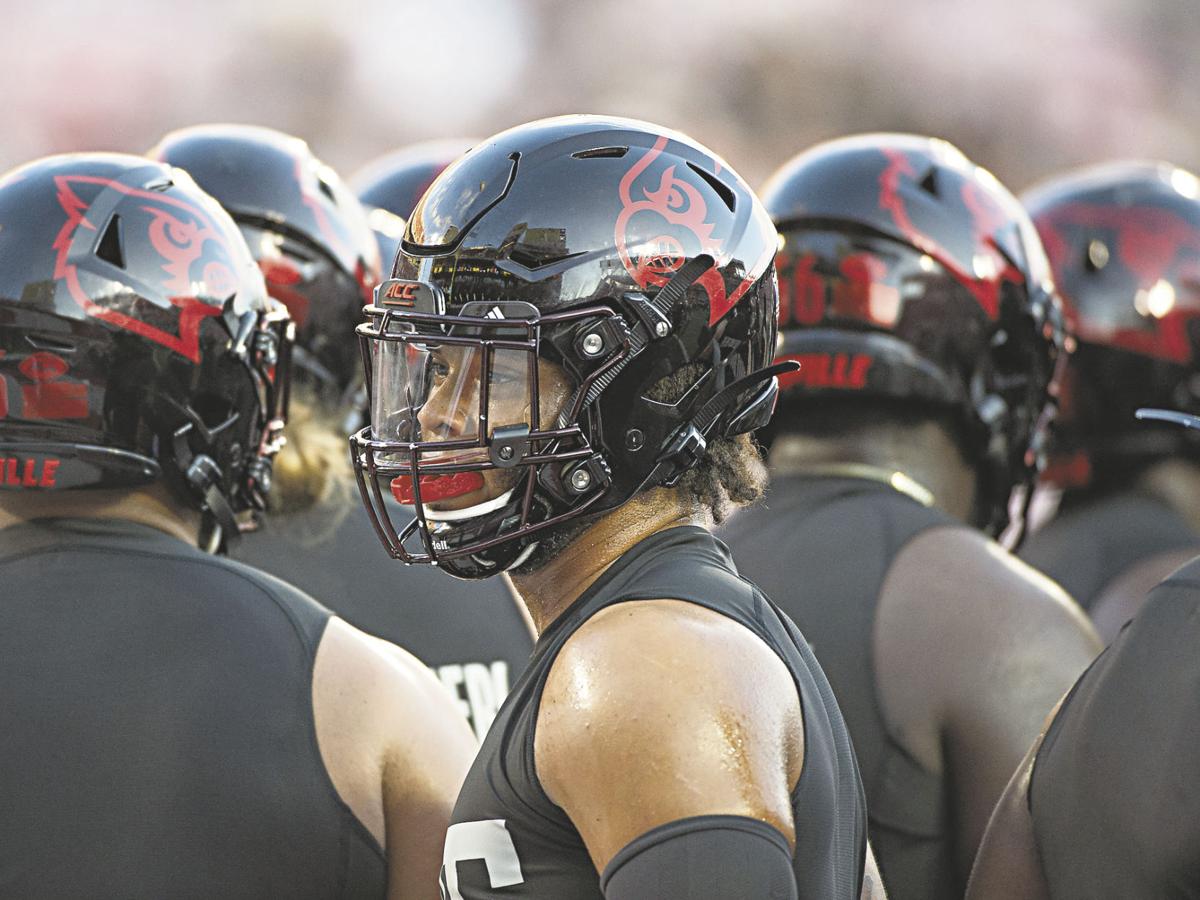 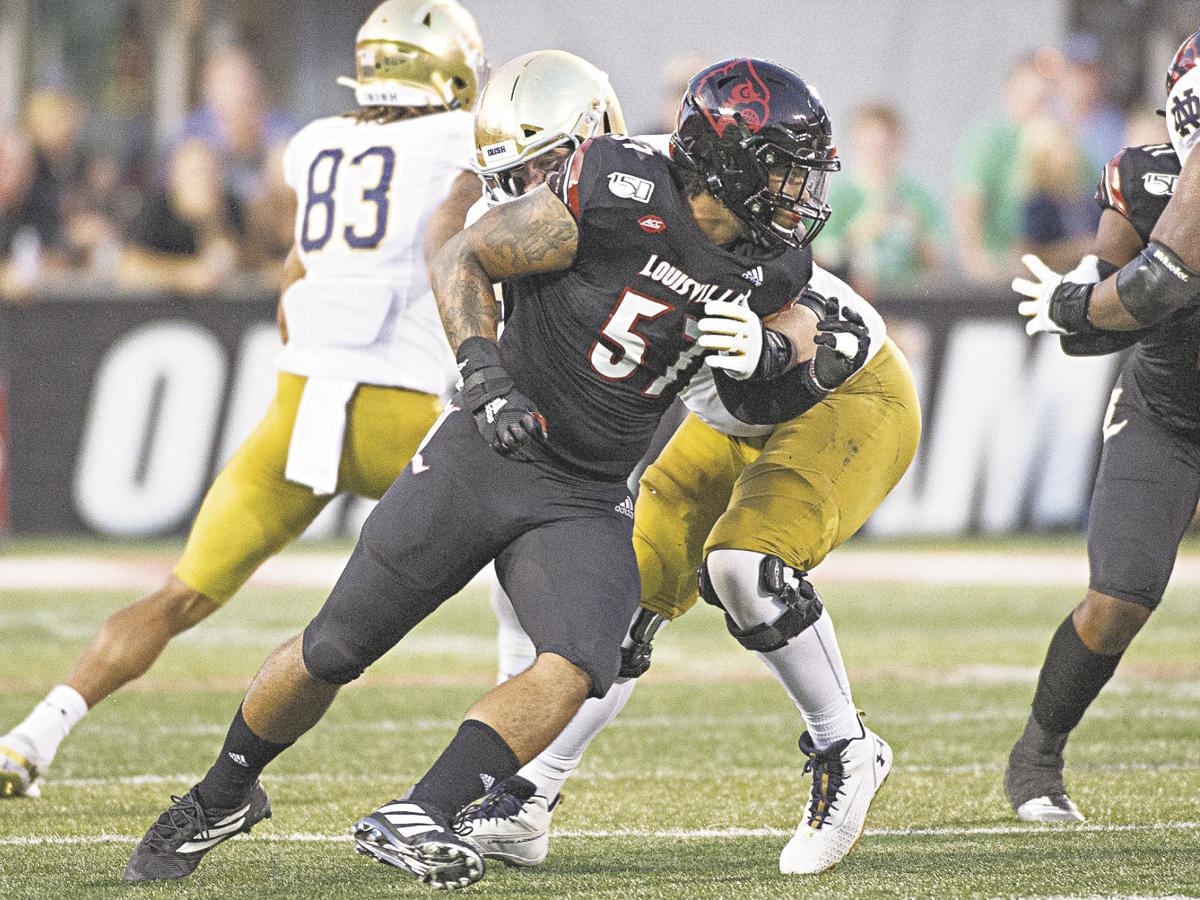 Louisville defensive lineman Dayna Kinnaird drives into the backfield during the Cardinals game against Notre Dame at Cardinal Stadium on Monday. Photo by Joe Ullrich 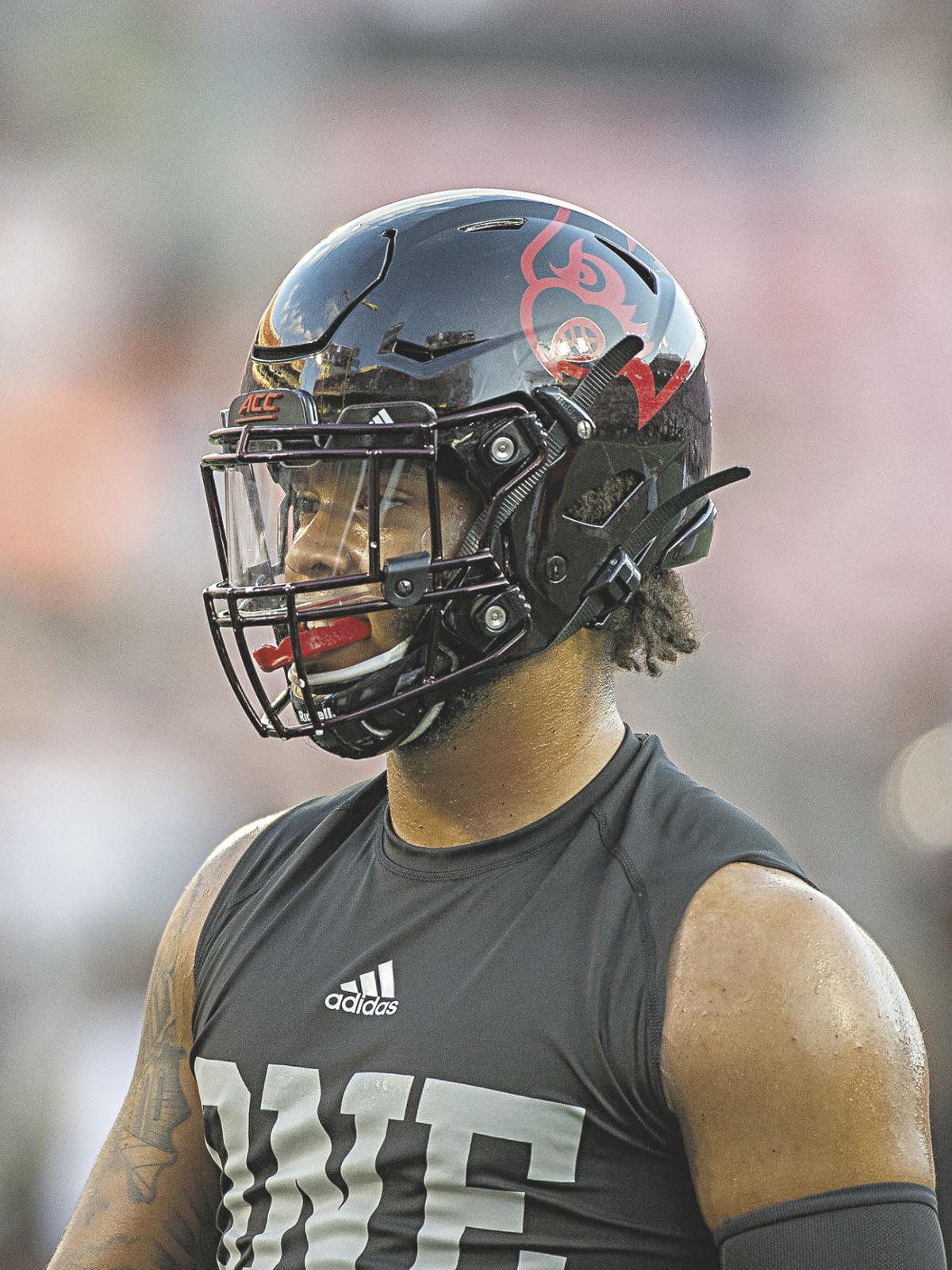 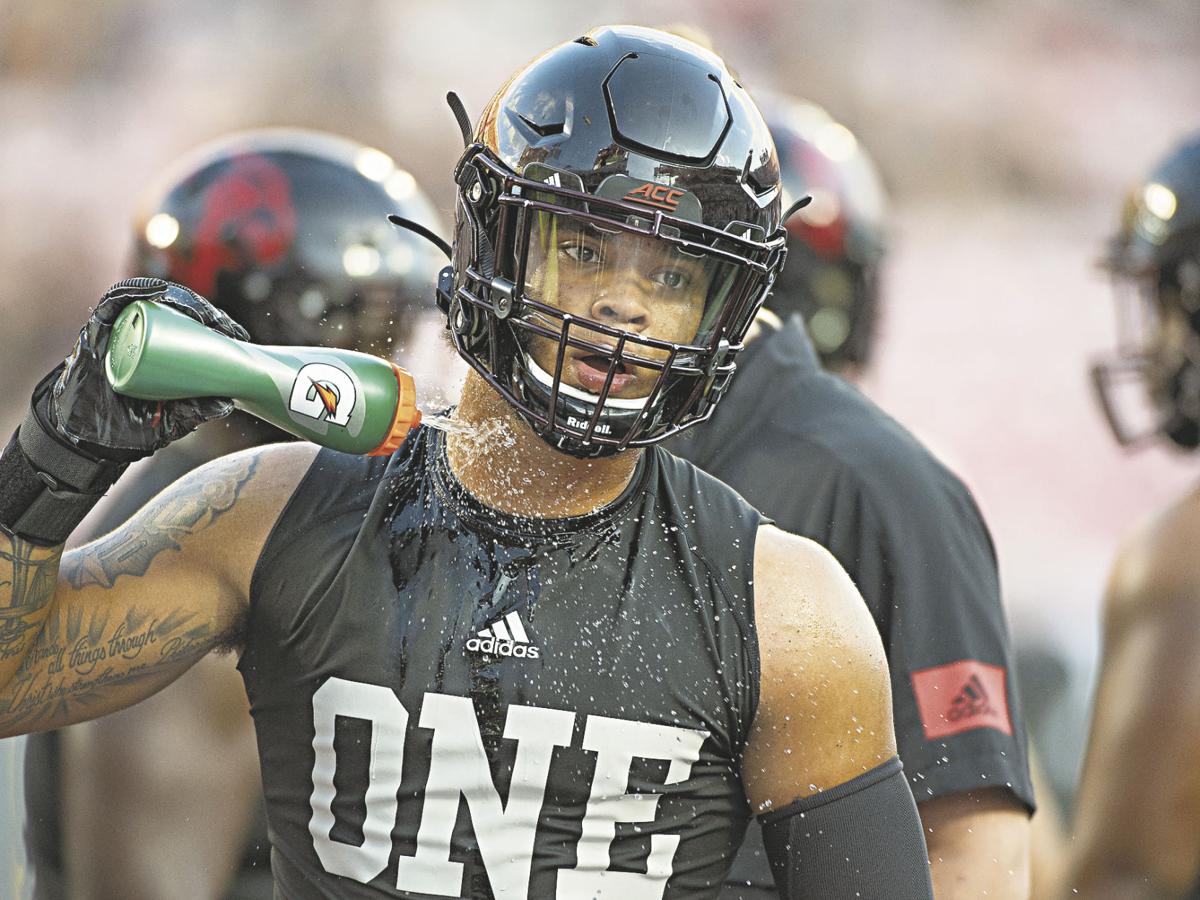 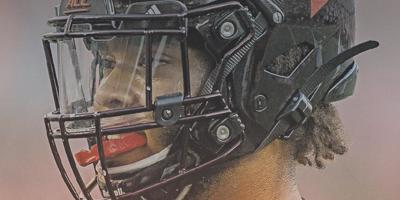 LOUISVILLE — Successful athletes — or anybody really — need to hear the truth from the mentors and role models in their lives.

As Dayna Kinnaird was finishing his junior year of high school at Jeffersonville, he was at a pivotal juncture as a football player. His passion for the game was elevated to its peak and he had a dream to play for the University of Louisville. He wanted to spend the summer attending college camps in an effort to get in front of college recruiters.

"My freshman and sophomore years [at Jeff], I was probably 6-[foot-]2, 6-3, 240 [pounds], but had a lot of baby fat on me. I was still sort of new to the game of football. I didn't love it the way I did my junior and then my senior year," said Kinnaird, whose father Gary provided the dose of truth Dayna needed.

"I always said my dream was to play at U of L. My dad came up and told me and said 'Are you really serious about playing college football?' He said, 'You've got a lot of work to do. You've got to change your body, you've got to start lifting.' So that's what I started to do. My dad was a bodybuilder back in the day and my mom had done a little bit of competition. I went to work and I lifted a minimum of four days a week."

Kinnaird, who is now listed at 6-3, 254 pounds, achieved his dream, walking on at Louisville and his strong work ethic was rewarded this past summer with a scholarship by first-year Louisville coach Scott Satterfield.

Kinnaird was in the starting lineup at defensive end when the Cardinals opened the 2019 season against Notre Dame on Labor Day.

“We are so happy for Dayna. He was a kid who was giving maximum effort and was doing everything we ever asked him to do. He deserves this scholarship because of all the work and dedication he put in since we got here as a staff," Satterfield said.

Kinnaird and the Cardinals were ready to fight the then-ninth-ranked Fighting Irish, and it showed with a strong first half. Notre Dame, though, took a 21-14 lead into halftime and pulled away for a 35-17 victory.

"It was so exciting. Just for that first game, a record-breaking crowd, on a Monday night Labor Day against a Top 10 team in the nation. I don't know how you can get much better at kicking off your college career," Kinnaird said.

The Cardinals aren't surprised by the solid start under Satterfield's leadership.

"My teammates, that was the biggest thing, we're so much about family and love and the energy. We call it 'Bringin' juice,'" Kinnaird said. "There's so much juice and so much excitement around this program right now. That game, that experience is something I'll remember for the rest of my life. We didn't win, but we showed a lot of improvement."

For the redshirt sophomore, who started as a walk-on, there has to be a bit of a chip on his shoulder.

"For me personally, for being my first college game, I think I played pretty well. I think I showed a lot of people that I belong here, being a guy that was formerly a walk-on and going to becoming a starting defensive end. I think I proved myself a little bit," said Kinnaird, who recorded one tackle Louisville's 42-0 victory over Eastern Kentucky on Sept. 7.

The challenge of earning regular playing time as a scholarship player after walking on isn't easy. The lack of reps can test your confidence and resolve, but Kinnaird has been relentless since leaving Jeffersonville. Even in the face of some adversity in the form of health.

"I walked-on two days after I left high school in May and went straight to U of L and started out with summer workouts," Kinnaird said. "On my fourth day of camp I had a season-ending injury. I had prepared so much for that moment and just for it to be put on hold was not only physically tough, but mentally it was extremely tough. I owe all credit to my parents. My parents helped me so much in getting back to health. The training staff at U of L are phenomenal people, they helped me get back and strong and put me in the place I am now."

But then it was back to work.

"Being a walk-on, it's pretty tough. Not a lot of people know about it. It's a lot of hard work. You get very limited reps and limited time to get out and show what you can do. This coaching staff, they gave me a chance and I was able to seize the opportunity. This past fall camp, Coach Satterfield blessed me with a scholarship for all the hard work I've been able to put in," Kinnaird said.

Kinnaird began to develop his passion for football, he said, as a junior at Jeff when offensive line coach Isaac Parker — who's now the head coach — found him on the sideline one day at practice.

"I looked over and saw this mammoth of a young man standing on the sideline," Parker recalled. "They were running a defensive drill. I'd only been there two days. I said [to the defensive coordinator], 'Who's this guy?' I asked if I could have him. He goes 'Take him.'

"The next six practices I poured straight into him. [He had] pure athleticism. Once he got excited, once he was confident, his drive and work ethic fired. There was no one who could hold him back."

Parker started him at right tackle and he was a solid performer there, but it was just the beginning. Kinnaird attended camps, including one at U of L, in the summer following that junior season.

"After my junior year, after going to camps and all that stuff, we found out there was no chance of being a college athlete at offensive line at 6-3, 240. You just can't do that. So my senior year, preparing that summer, my very first college camp I went happened to be [at] U of L. That's where I kicked off my recruiting with them. Over that summer, I learned how to play the [defensive end] position. I prided myself on being a big technician, working my hands and stuff. My senior season came and I was the starting defensive end."

Parker wasn't surprised when Kinnaird delivered the news to him.

"He says 'Coach I went to a line camp. They told me that I'm not an offensive lineman,'" Parker said. "You look at him and say, 'That's a D-I defensive end.' He worked hard to make that happen. I've never seen a high school kid work as hard as he did those two years. That's through his own hard work. He's one of the hardest working young men I've ever seen."

By the time his senior season was over, Kinnaird had 66 tackles, 13 for loss, four sacks, one forced fumble and two blocked field goals to earn All-Hoosier Hills Conference honors.

Kinnaird was brand new to football in middle school, playing for coach Danny Struck at Parkview Middle School. Struck, also the Jeffersonville strength coach, got the opportunity to work with him in high school as well.

"He had a great work ethic from the beginning. He had a need to learn and do more," Struck said. 'We joked he was so stiff back then, we called him 'Frankenstein.' So we did yoga and tumbling drills and dots and ladders. He was always up for anything and always said he was going to play for U of L."

Like Parker, Struck didn't miss the chance to see Kinnaird in person start against Notre Dame.

"You would have never known he was that stiff kid. He was a fluid, athletic, big, strong Division I starting athlete," Struck said. "He isn't the best athlete I've ever seen. But he is one of the most special young men I've ever coached. He knew his weaknesses and attacked them."

The culture change, while always a process, was felt immediately, Kinnaird said.

Satterfield and his staff arrived in Louisville after a successful run at Appalachian State and Kinnaird said the U of L players have bought into the shift in culture.

"We have a board in our hallway that is called the 'Can't get right board.' Any kind of little miss, missing late to lift, or didn't make it to a mandatory meal or something like that, guys are held accountable for it. Those type of things factor into how they're getting us to buy into the culture and the winning formula they had at App State," Kinnaird said. "When they came in in January until now, the team has taken a whole 180. We're a totally different team than we were a year ago."

The Cardinals (2-1) open Atlantic Coast Conference action Saturday at Florida State against a Seminoles squad coming off a 31-24 loss to No. 21 Virginia.

"It's the first ACC game. This is a game that last year, they came into Cardinal Stadium, and it was a close game, a game a lot of us felt like we should have won. There's a bad taste in the mouth from it," Kinnaird said. "This being our first ACC matchup, it couldn't get any better to go down and play at a place like Florida State. It think it's going to be a good matchup and we're ready."