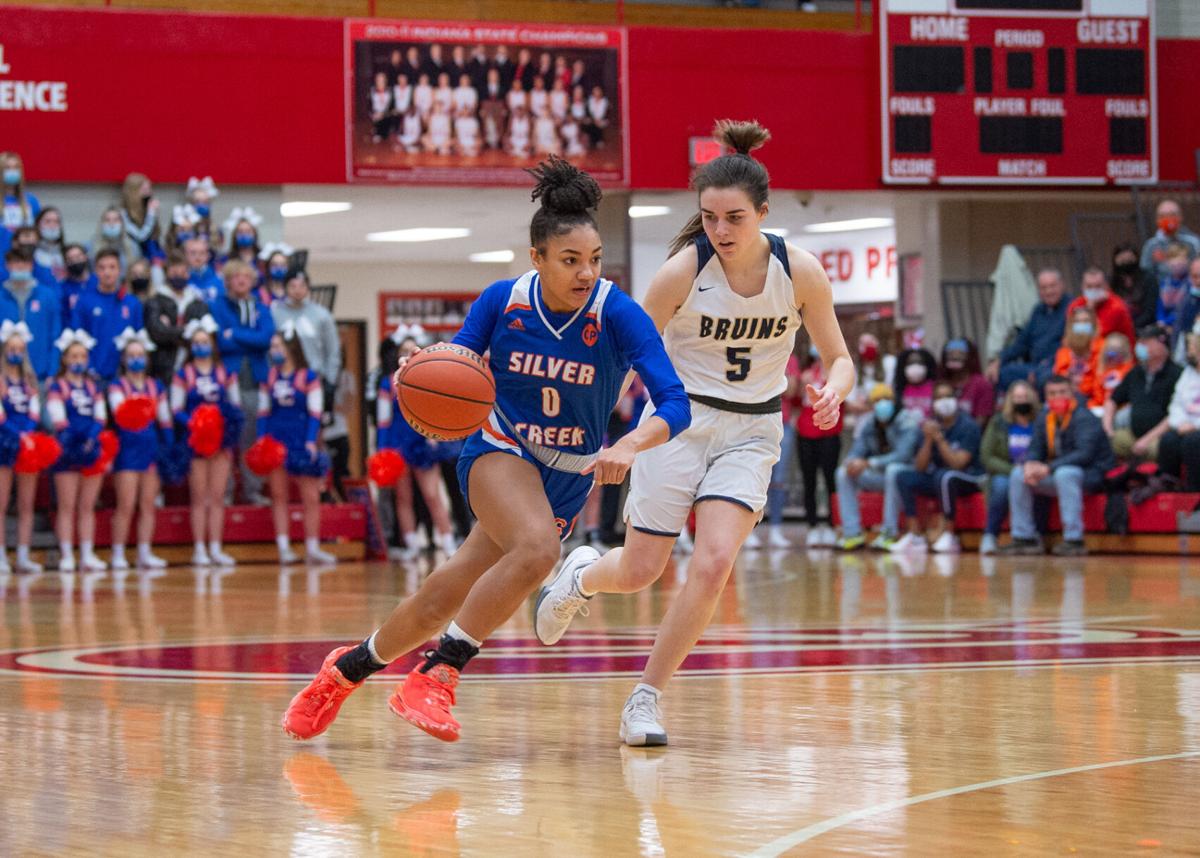 Silver Creek’s Kynidi Striverson drives the ball during the Dragons’ 59-43 victory over Tri-West in the Class 3A Jeffersonville Semistate championship last season. The 5-8 senior point guard averaged 10.8 points, 5.4 rebounds, 4.6 assists and three steals per game running the show for the state-title-winning Dragons. 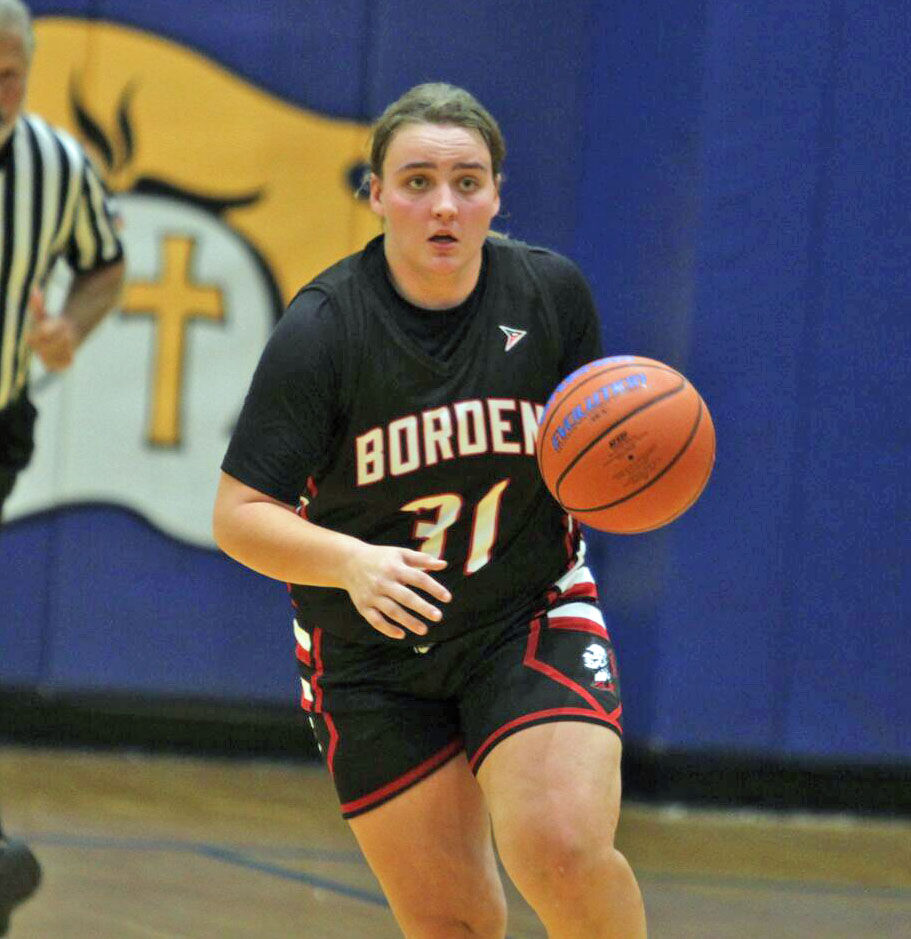 Borden junior guard Emily Cissell looks up the court during a recent game at Christian Academy. She has had the best early-season performance with her 10 3-pointer, 40-point effort against Crothersville in mid-November. 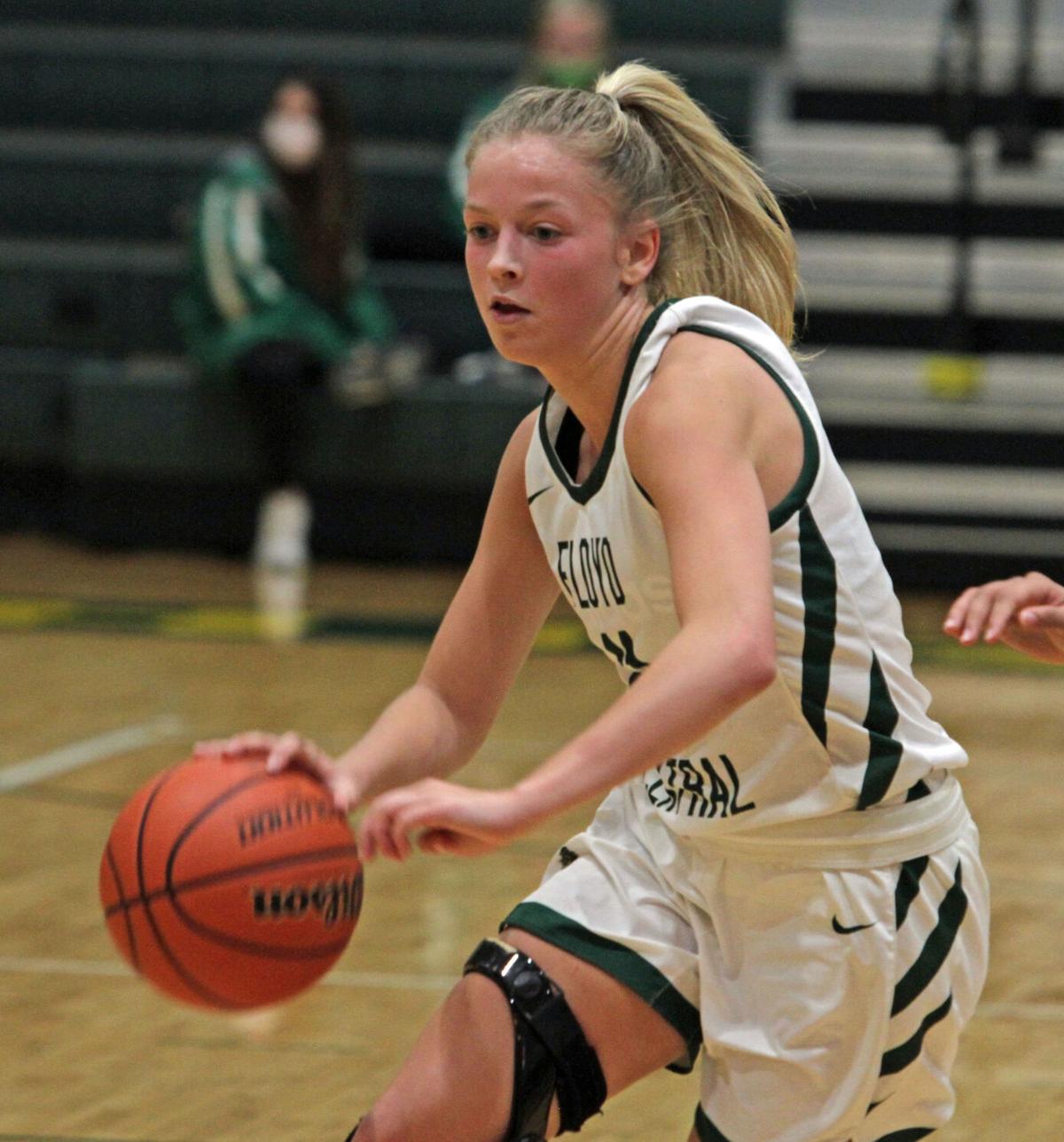 Floyd Central senior guard Keegan Kaiser is off to a fast start for the Highlanders. She’s averaging 15.3 points in Floyd’s first four games. 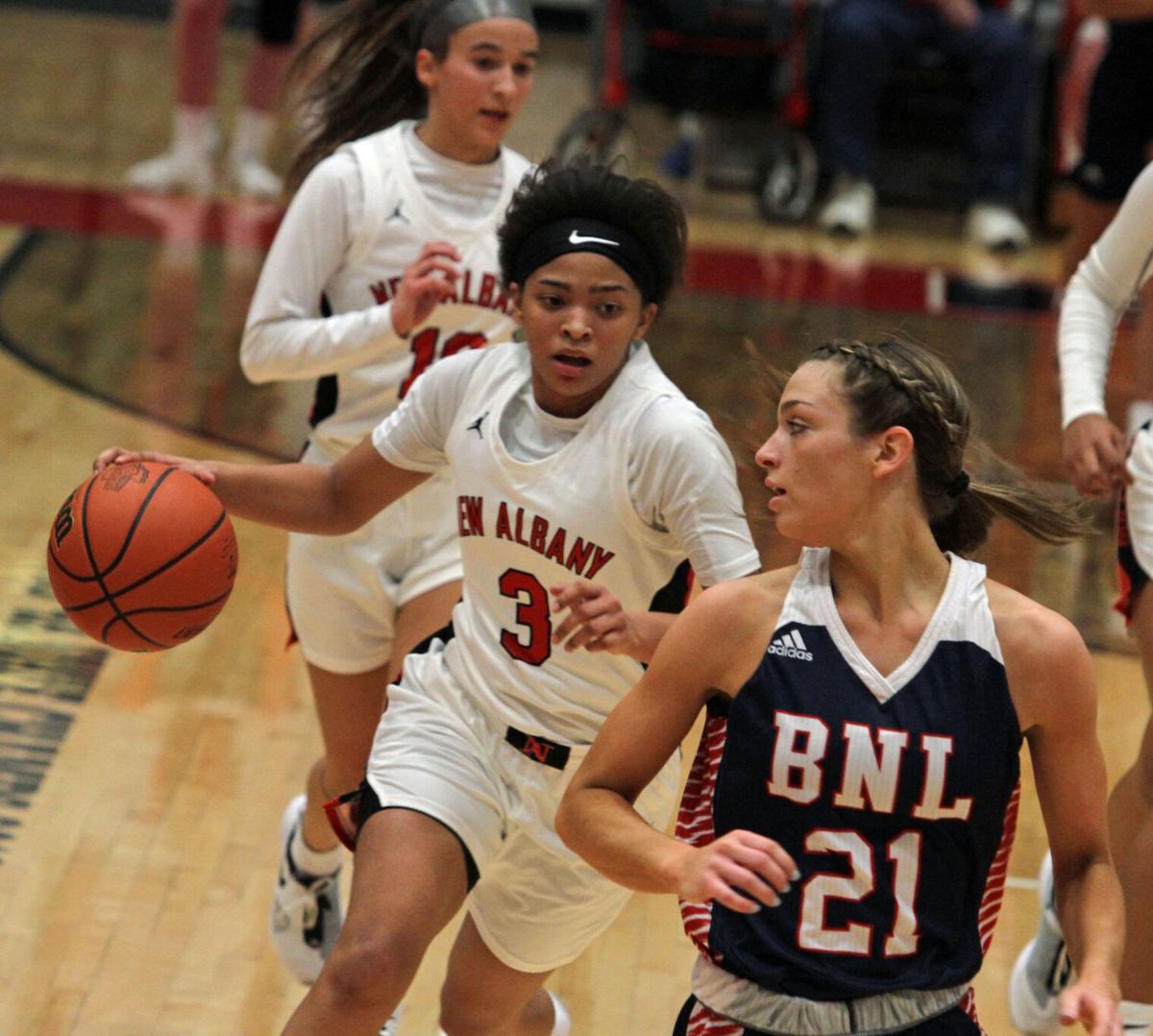 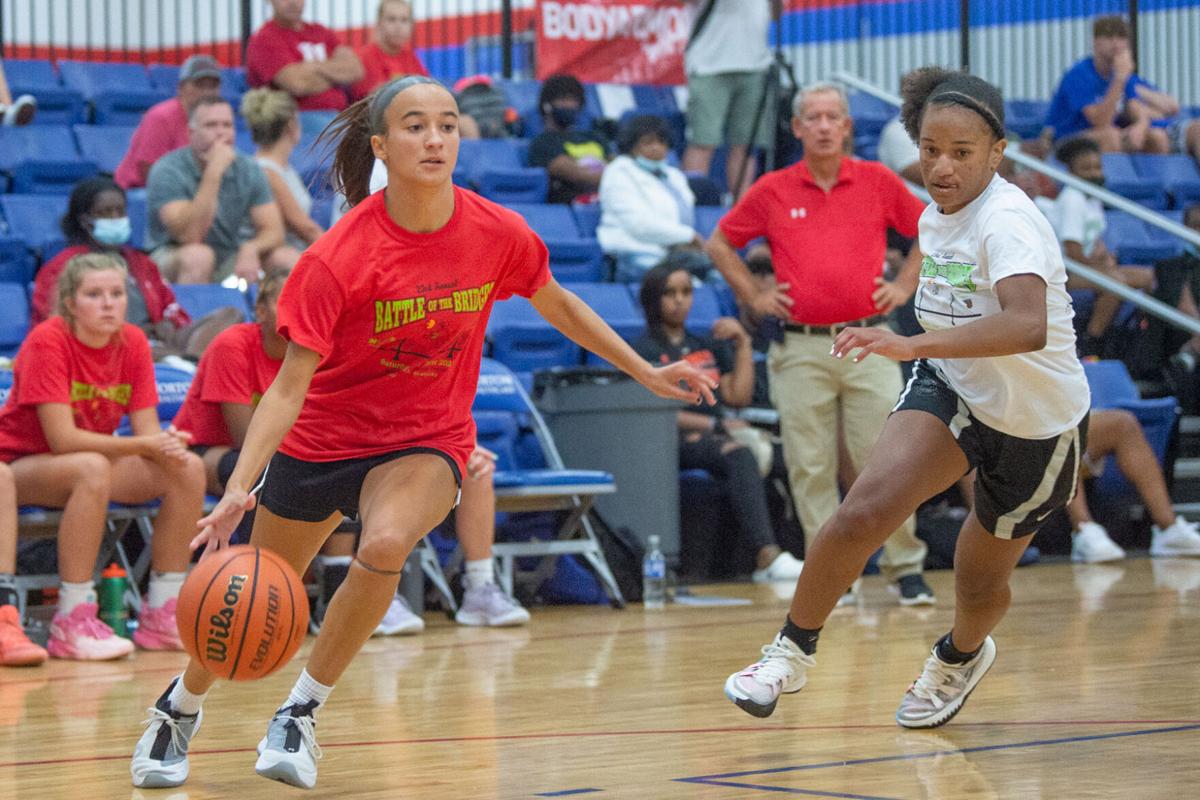 New Albany's Taylor Treat drives the ball during Indiana's 65-50 loss to Kentucky in the 23rd Annual Battle of the Bridges game held in Louisville on Saturday.

The season is underway for all of our area teams.

Once again, there’s plenty of talent in Clark and Floyd counties. With that in mind, here are 20 players to watch this season.

The 5-foot-8 senior wing averaged 4.6 points and 3.9 rebounds as a junior. She likely won’t be a huge scorer for the Red Devils this season, but she’ll be counted on for defense, hustle and leadership.

The 6-2 junior center, the area’s tallest player, can be a difference-maker on both ends of the floor for the Highlanders.

The 5-6 junior guard, who averaged 14 points and 4.8 rebounds per game as a sophomore, can score in bunches. She proved that Tuesday night, when she hit a single-game program-record 10 3-pointers and scored a career-high 40 points against Crothersville.

The 6-0 sophomore wing averaged a team-best 11 points per game, while shooting 52 percent from the field, as a freshman. She’s picked up where she left off this season. She’s averaging 12.8 points through the Pirates’ first four contests.

The 6-0 junior, who was second on the team in scoring (5.8 ppg) as a sophomore, has been sidelined by an injury early this season. Once she gets healthy, Crisp can give the Pioneers a much-needed inside presence.

The 5-8 junior point guard, who averaged only 3.5 points per game as a sophomore, has had to pick up the scoring slack after the graduation of Jasmine Walker and Kylie Perez, who combined to average 23.3 ppg last season. She’s proved up to the challenge early this season, outscoring Crothersville 24-21 in the Generals’ victory over the Tigers on Nov. 9.

The 5-8 sophomore guard averaged a team-best 13.1 points and 8.1 rebounds a game as a freshman. She scored a career-high 30 points in the Mustangs’ 60-23 win at Christian Academy last Saturday.

The 5-9 senior guard averaged 8.5 points, 3.4 rebounds and two assists a game as a junior on her way to earning All-Hoosier Hills Conference honorable mention for the second straight year. She’s off to a strong start in her final season, averaging 15.3 points in Floyd’s first four games.

The 5-10 senior forward nearly averaged a double-double (9.2 ppg, 9.4 rpg) as a junior. She should have a shot at doing that this season.

The 5-8 junior guard was the leading scorer (9.2 ppg) at Jeffersonville as a sophomore. She scored 18 in her first game as a Pirate and has averaged almost 12 through Charlestown’s first four games.

The 5-5 sophomore guard averaged 10.6 points, 3.1 assists, 2.7 rebounds and two steals per game as a freshman. She’s at almost 12 a game through the Pirates’ first four after moving over to the point.

The 5-6 junior guard, who put up 5.6 points a game as a sophomore, averaged 12.3 through the Red Devils’ first four contests.

The 5-7 senior guard, who averaged 6.9 points per game as a junior, is off to a red-hot start for the Bulldogs. She’s put up 17.6 points over New Albany’s first five games.

The 5-9 senior wing averaged 4.8 points a game as a junior on the Class 3A state-championship-winning team. She’ll be looked to for more scoring this season. The DePauw commit proved up to the task in the Dragons’ second game, tallying 20 in a win over Seymour last Friday.

The 5-7 senior guard averaged five points per game as the first sub off the bench for the Dragons’ state-title team last season. She’ll put up bigger numbers this season as she moves into the starting lineup.

The 5-10 sophomore forward, a volleyball standout, didn’t play her freshman year. However she proved in her second game, when she put up a double-double (19 points, 12 rebounds), that she could be a big factor this season.

The 5-8 junior forward, who averaged 3.2 points per game as a sophomore, is scoring at a much higher clip this season. She tallied 23 in a recent win over Clarksville.

The 5-8 senior point guard averaged 10.8 points, 5.4 rebounds, 4.6 assists and three steals per game running the show for the state-title-winning Dragons. One of the best guards in the state, Striverson will continue to stuff the stat sheet this season before heading to the University of Evansville.

The 5-6 senior guard, who put up 12.2 points per game as a junior, is off to sizzling start for the ‘Dogs. She averaging 14.6 points through the first five for New Albany.