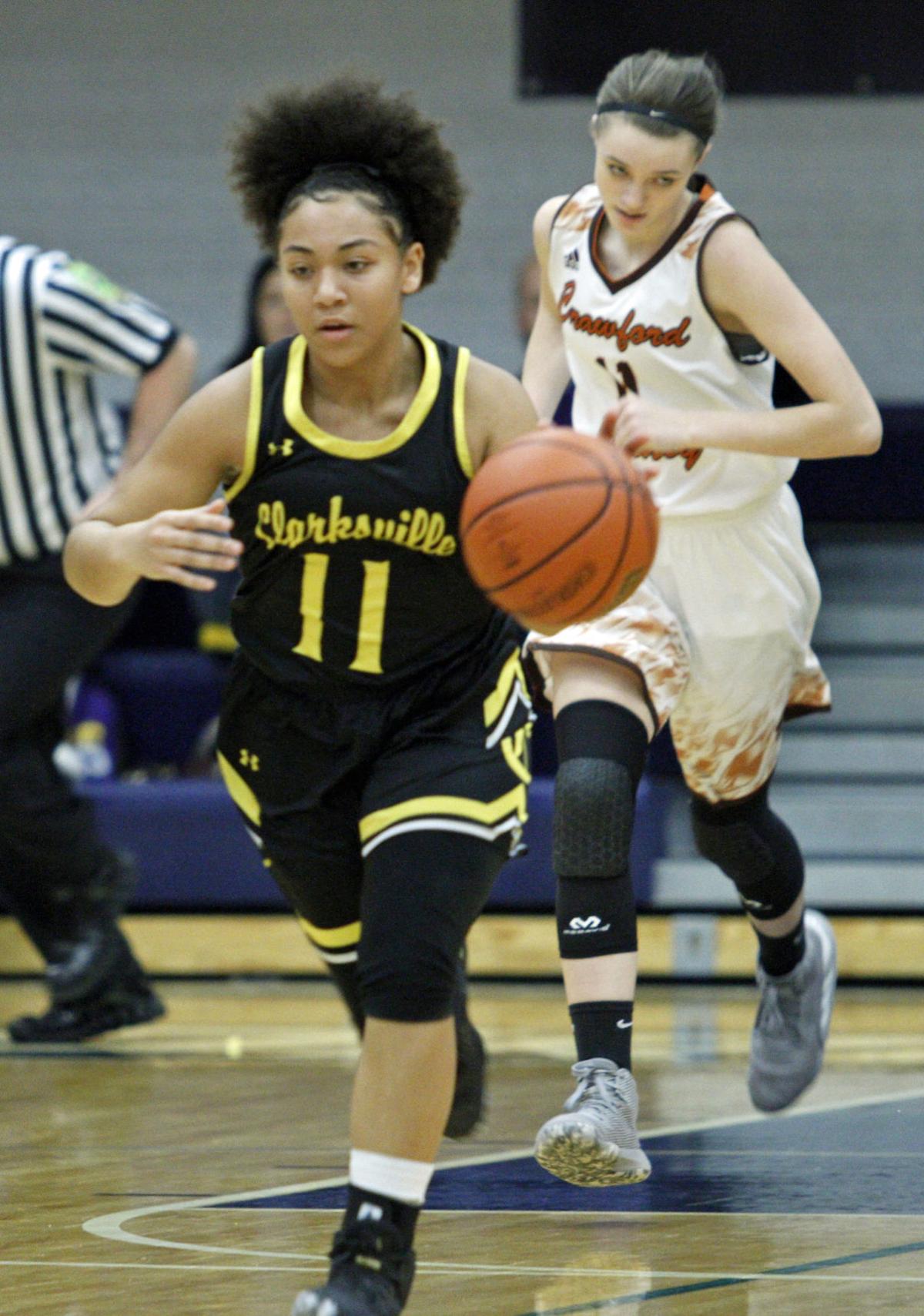 Clarksville freshman Emma Winsor pushes the ball up the court during the Generals’ game against Crawford County in the Class 2A Providence Sectional semifinals Friday night. 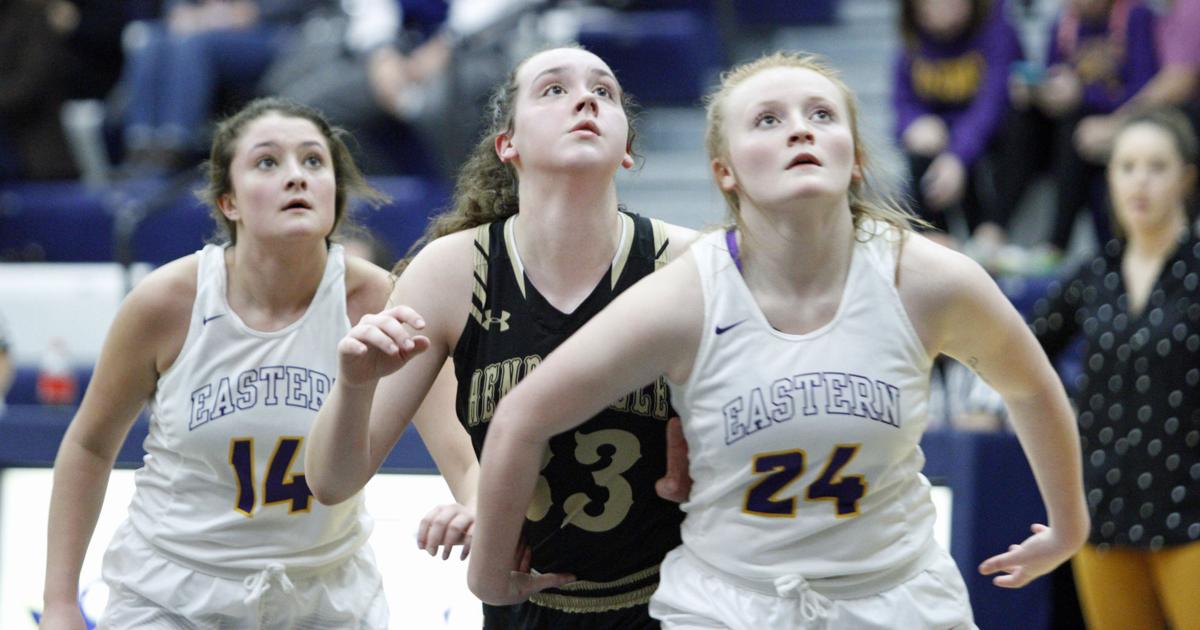 Eastern’s Lily Crumpton (24) blocks out Henryville’s Kaitlyn D’Angelo, as Shelbi Patton (14) looks on, during a free throw in Friday night’s first semifinal of the Class 2A Providence Sectional.

Clarksville freshman Emma Winsor pushes the ball up the court during the Generals’ game against Crawford County in the Class 2A Providence Sectional semifinals Friday night.

Eastern’s Lily Crumpton (24) blocks out Henryville’s Kaitlyn D’Angelo, as Shelbi Patton (14) looks on, during a free throw in Friday night’s first semifinal of the Class 2A Providence Sectional.

CLARKSVILLE — Henryville was able to hang tough against Class 2A No. 7 Eastern, but an early barrage of 3-pointers by the Musketeers proved too much to overcome as they prevailed 52-28 in the Providence Sectional semifinals Friday night at the Robert I. Larkin Center.

In the second semi, 11th-ranked Crawford County was sloppy and struggled to score but still came away with a 38-19 win over Clarksville.

The Musketeers had beaten the Hornets by 37 on Jan. 30, so four 3-pointers by Eastern in the first quarter looked like more of the same on the way to an 18-6 lead.

But Henryville didn’t fold. Three-pointers by senior guard Allison Horn and junior guard Riley Nunn helped the Hornets outscore Eastern in the second quarter, making it 26-15 at the break.

“I just wanted them to work hard,” first-year Henryville coach Tuesday Guernsey said. “I wanted them going in with their tanks empty.”

Unfortunately for the short-benched Hornets, their tank emptied before the game did. Still, they played hard and made the Musketeers earn it.

“All in all I was pleased with [the effort],” said Guernsey.

Henryville did much of its damage on the free throw line in the third quarter, cutting the deficit to single digits (28-19) on a foul shot by junior forward Anna Knecht at the 3-minute, 30-second mark. A field goal by Horn made it 35-22 inside the final minute of the quarter, but the Hornets were unable to get any closer after that.

A 7-0 run by the Musketeers made it 42-22 early in the fourth quarter and that spelled the end of Guernsey’s first season with the Hornets.

For the game, Horn scored 11 points and Nunn added eight to lead Henryville, which finishes at 8-14. Eastern, which knocked down seven 3-pointers, was paced by Kendra Sill’s 14 points.

Like the Hornets, the Generals had endured a 37-point loss to their semifinal foe, but that came in early December.

The sectional rematch was an opportunity to show if the Generals had improved enough under first-year coach Shelby Gliebe to test the highly-regarded Lady Pack.

Clarksville hustled and played good defense in the first half, but a two-point first quarter put the Generals in a double-digit hole (12-2) heading into the second.

“I really thought our defense would fuel our offense,” Gliebe said. “But their press, we didn’t handle it well.”

Both teams struggled to score in the second quarter and it was 14-4 at the midway point. A putback basket by Clarksville junior forward Kylie Perez made it 14-6 at the 3:30 mark, as the Generals attempted to put some pressure on the Lady Pack before the break.

Crawford County felt the pressure and scored just six points in the quarter, but Clarksville managed just four and trailed 18-6 at the break.

Crawford junior forward Treasure Nickelson led the way as the Lady Pack surged to start the third quarter. Nickelson had six points and two steals in under 90 seconds to make it 24-6.

Clarksville finally got a second-half score when Perez had a fast-break bucket to make it 24-8 with 2:45 to play in the third quarter. The Lady Pack answered with a 4-0 run and led by 20 (28-8) going into the fourth quarter.

Clarksville was able to get some shots to fall in the final frame, but the Generals were unable to overcome the 20-point deficit and finished the season at 4-19.