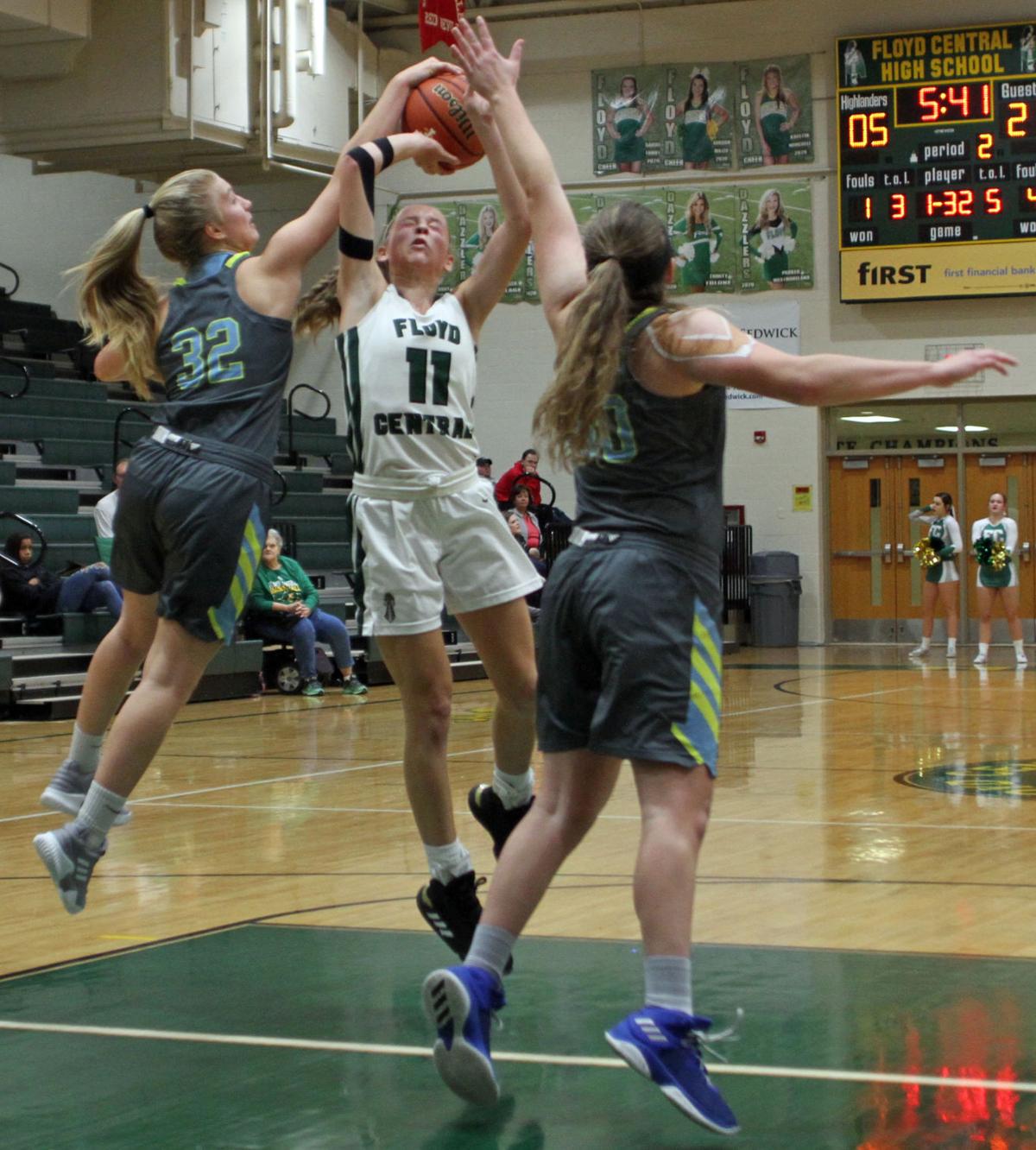 Floyd Central sophomore Keegan Kaiser has her shot blocked by Castle's Natalie Niehaus during the Knights' 57-29 win over the host Highlanders on Saturday night. Niehaus tallied a game-high 23 points while Kaiser led Floyd with nine. 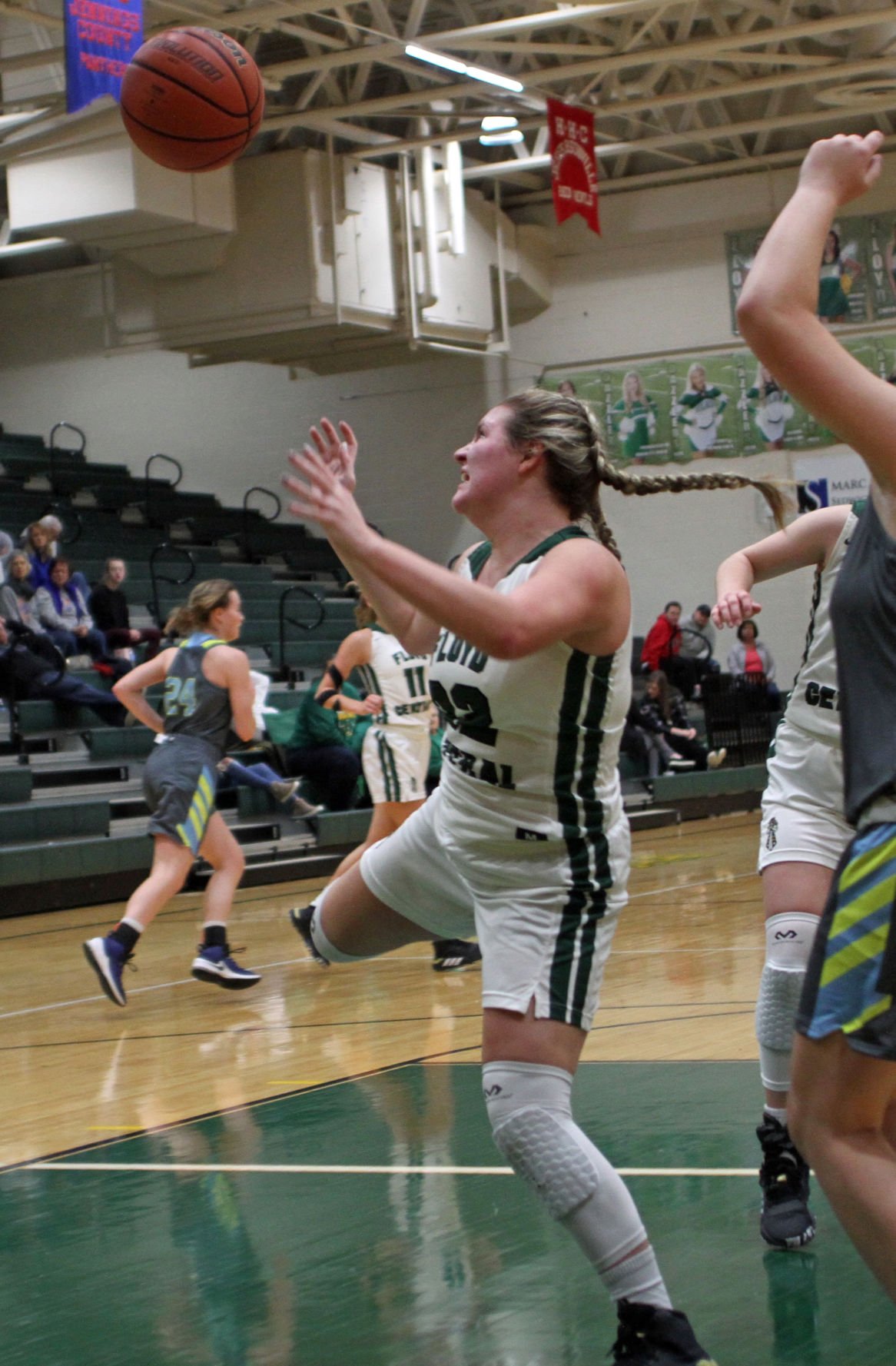 Floyd Central junior Laney Siewert prepares to grab a rebound during the first half of the Highlanders' 57-29 loss to visiting Castle on Saturday night.

Floyd Central sophomore Keegan Kaiser has her shot blocked by Castle's Natalie Niehaus during the Knights' 57-29 win over the host Highlanders on Saturday night. Niehaus tallied a game-high 23 points while Kaiser led Floyd with nine.

Floyd Central junior Laney Siewert prepares to grab a rebound during the first half of the Highlanders' 57-29 loss to visiting Castle on Saturday night.

The Highlanders, already down one starter, lost one player to injury prior to tipoff against Castle, then lost another during their 57-29 loss to the Knights, who used their fleet feet to their advantage.

“This is probably one of those, you have three films on’em, they are much faster in person than they were on film,” second-year Floyd Central coach Randy Gianfagna said. “Their speed, I think, got to us. They were in passing lanes. We had trouble just getting into any of our offense.”

It didn’t help matters that the Highlanders were without junior wing Grace Suer, who is out with a hip injury that she will have surgery on later this month. To make matters worse, freshman guard Hallie Mosier got hurt in warmups. Then, late in the game, sophomore guard Kendall Brown injured her shoulder.

“It’s just part of it,” said Gianfagna, whose first year on the job was earmarked by some key injuries.

Saturday night the Knights, who were a combined 46-6 the past two seasons and are reigning regional champions, got off to a fast start, leading 19-5 at the end of the first period.

“The first quarter I thought we got shook,” Gianfagna said. “We got live-ball turnovers and they turned into easy buckets for them.”

In the second quarter Castle added to its lead, outscoring the Highlanders 17-5 en route to 36-10 halftime lead.

“In the second quarter I thought we just missed a bunch of open shots,” Gianfagna said. “I thought we had shots that we’ve been hitting and they just didn’t go in. We had four or five 3’s rim in and out.”

That wasn’t the case for the Knights in the third quarter, when they hit half of their eight 3-pointers.

“We were going to let them shoot some threes, coming in they were shooting 25 percent from three, and then they hit some in the third quarter,” Gianfagna said.

Sophomore Natalie Niehaus tallied a game-high 23 points for the Knights.

“It’s the fifth game, you just go to work and get ready to go on Monday,” said Gianfagna, whose team is off until hosting Madison on Dec. 4. “It’s early in the season. It sounds cliche, but we'll just try to get better every game.”