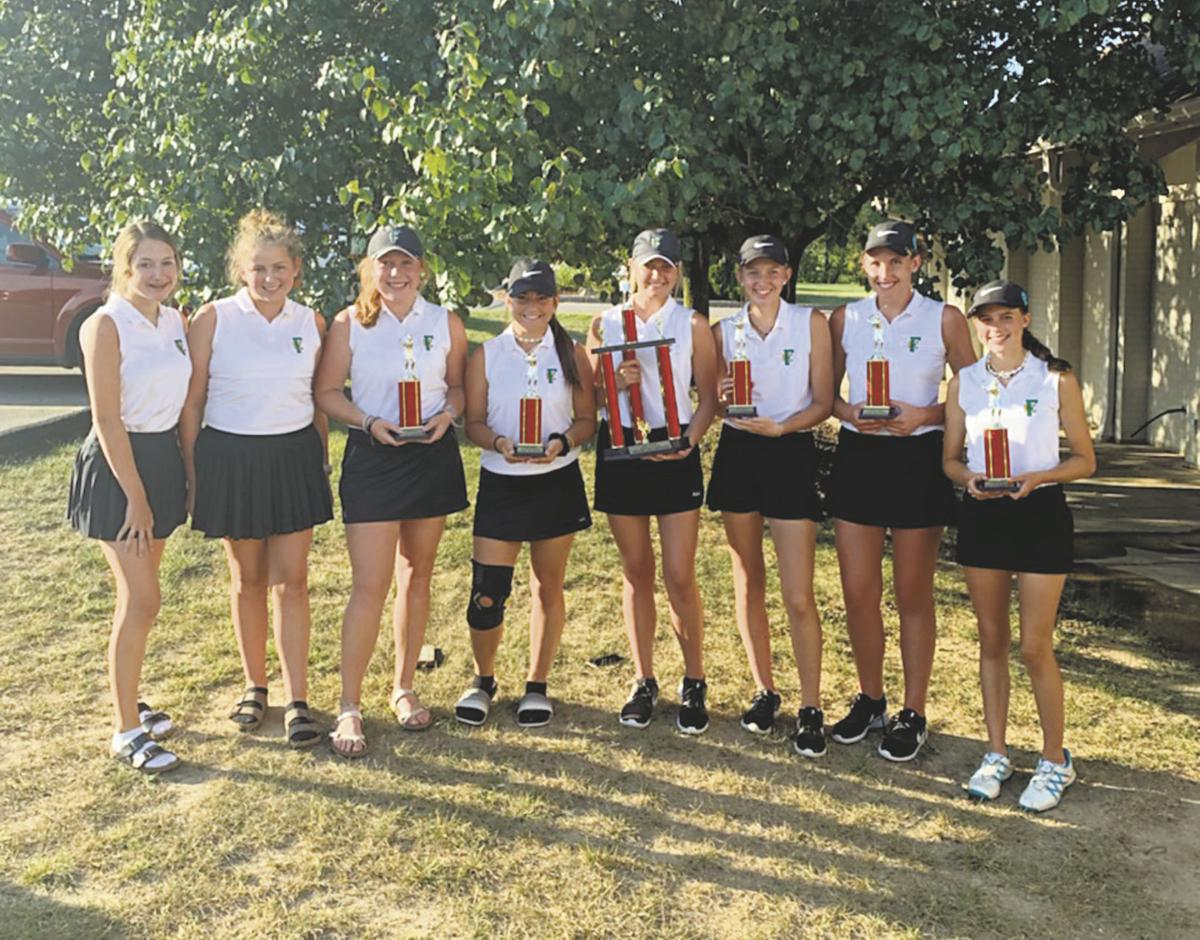 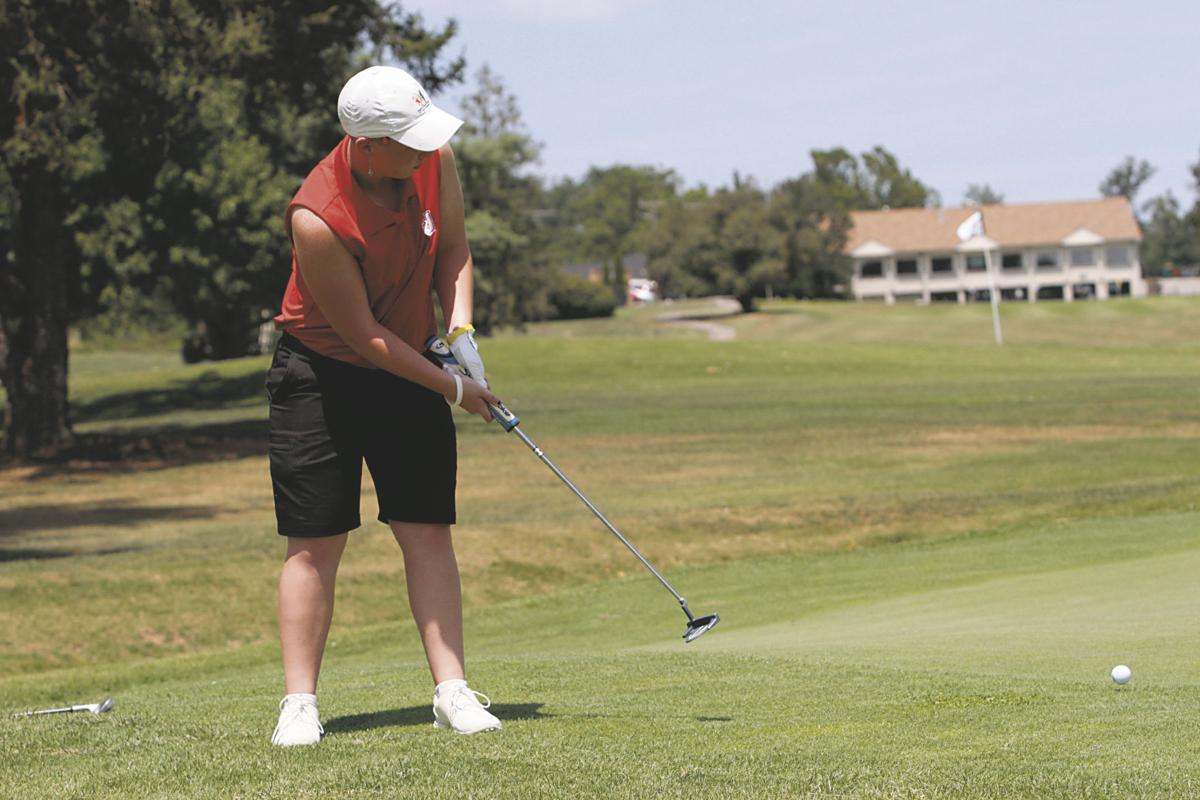 Jeffersonville's Allison Kane knocked in a putt from 20 feet to make par on No. 8 Saturday at Valley View Golf Course. | STAFF PHOTO BY CRAIG PEARSON 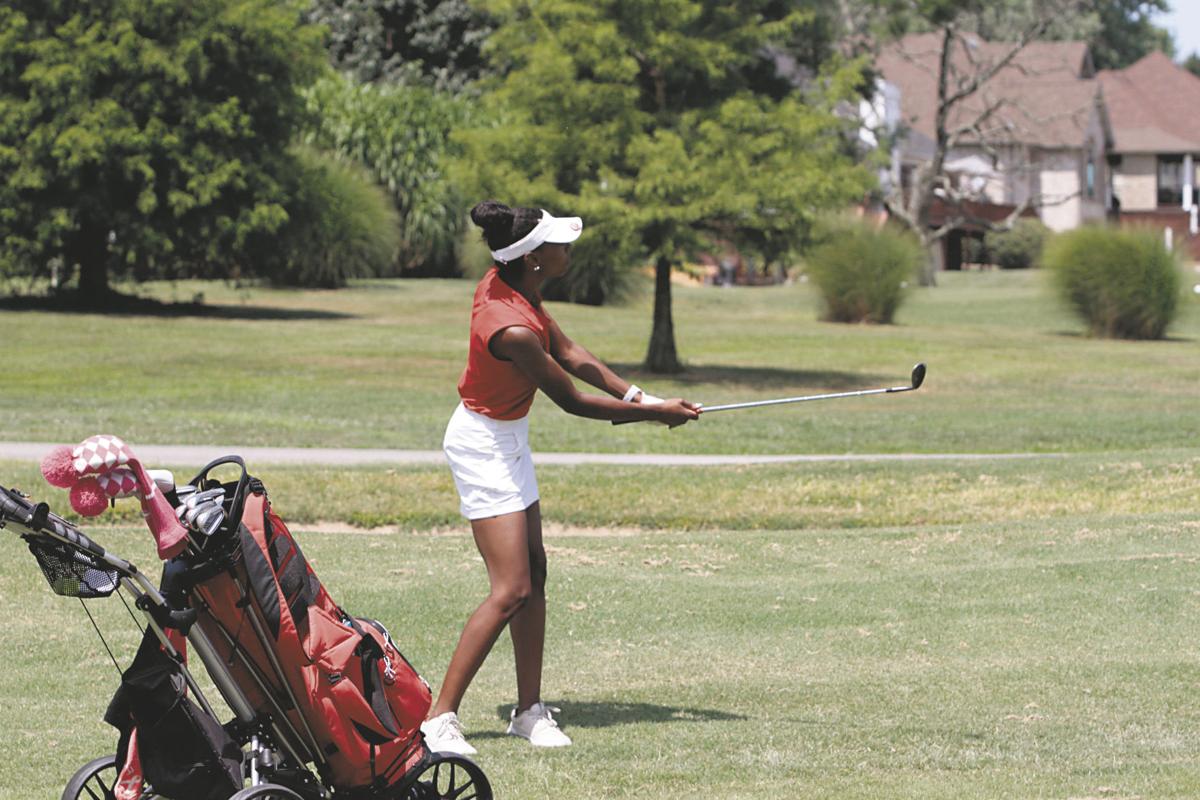 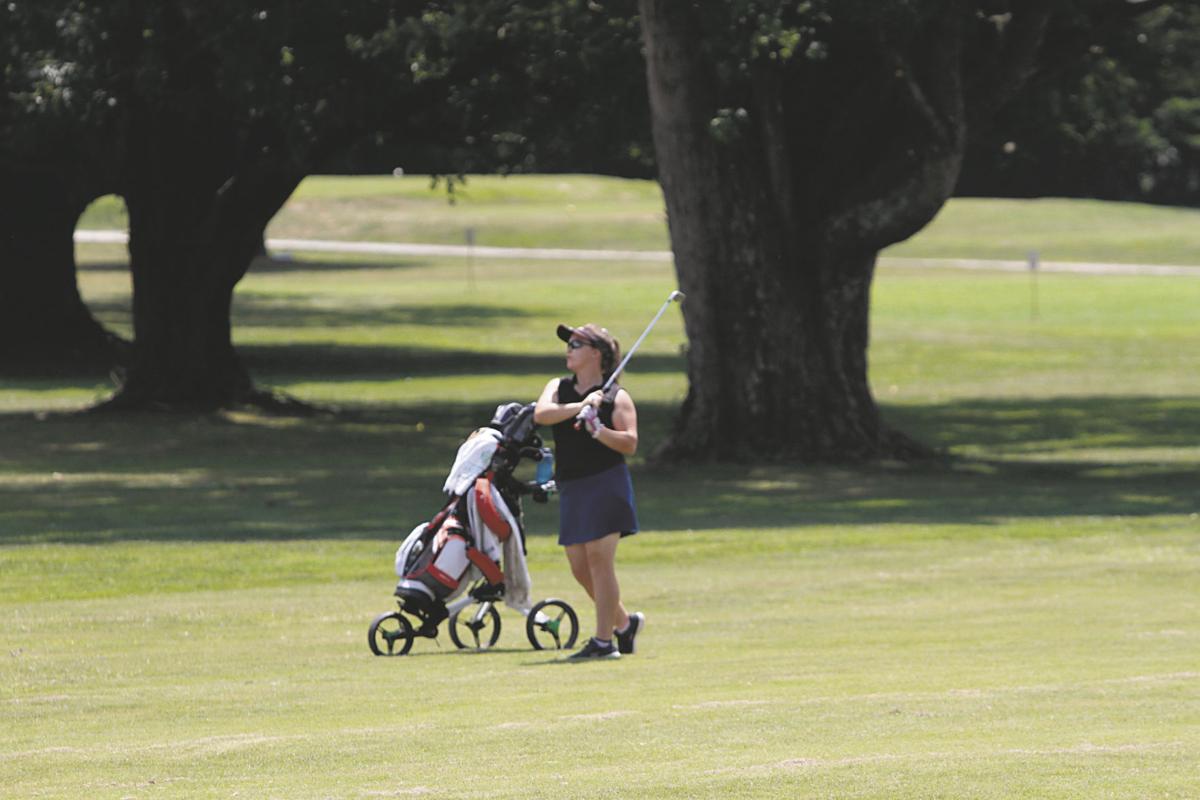 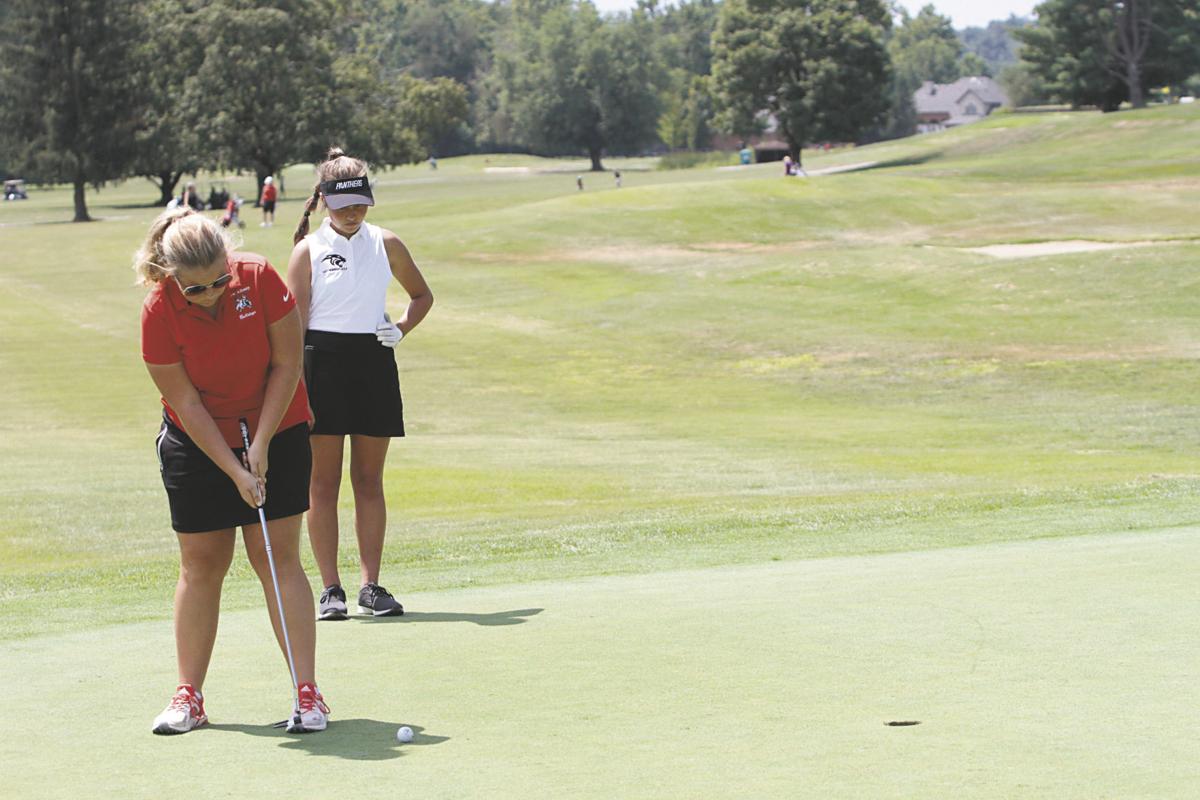 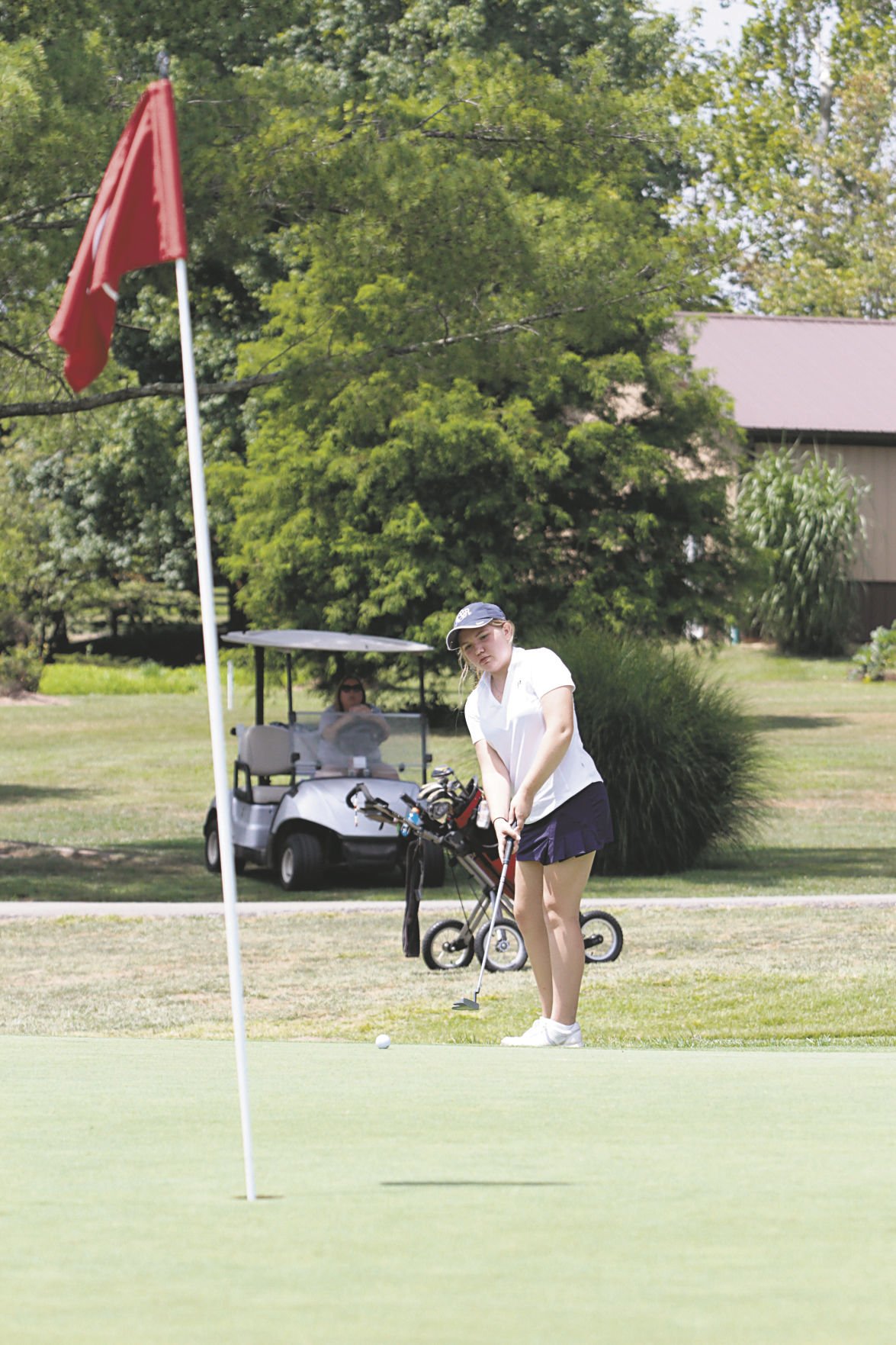 Jeffersonville's Allison Kane knocked in a putt from 20 feet to make par on No. 8 Saturday at Valley View Golf Course. | STAFF PHOTO BY CRAIG PEARSON

The Highlanders won by 50 strokes over runner-up Madison with a total of 345 in the 18-hole tournament. Sophomore Sophie Cook paced the Highlanders with an 82 and Zoe Hoehn was close behind with 86, a score that tied Jeffersonville's Allison Kane for fifth place.

"We've been practicing out here so that really helps. We've been working hard. The girls are starting to see their hard work this summer pay off," Collier said.

New Washington's Katlyn Price was runner-up with a 76. The lone Mustangs golfer made par on seven of the nine holes on the front nine but had back-to-back double bogeys on No. 15 and No. 16 to keep her from contending for medalist.

"I was really happy with a lot of my putts and a lot of my drives," Price said. "That was a pretty good start [to the season]. I'd have been happy with fifth place because it was a 76."

"Mentally she was having a rough week," New Albany coach Rick Belcher said. "She tuned everything off and went and played golf today. Her mental game was strong today. She can play when she does that. Still room for improvement, obviously."

Sarah Jefferson started strong on the back nine with a score of 43 and closed with a 50 on the front nine. Libby Bogdon was the Bulldogs' No. 3 player with a 108.

"Sarah had a first tough hole on 10 with a triple bogey and struggled on the front nine. She's an 80s player as well," Belcher said. "Libby's been struggling with her swing but she'll be there for us in the long run.

Jeffersonville's Kane had a steady round with a 44 on the front and 42 on the back, including a birdie on the par-4 13th.

"Being only five days into the season, I thought it was an outstanding effort. I'm confident she'll improve throughout the season," Jeff coach Dusty Corum said, adding a similar sentiment regarding No. 2 player Baylee Lawler. "Baylee shot 97, that early in the season, she performed excellent. She'll continue to improve."

Providence finished 11 shots better than Jeff with a 418, led by Kennedy Allender's 99.

If given the option, would you work from home permanently?

During the pandemic many workers were transitioned into remote employees, working from their homes instead of office settings. Some found the process convenient and productive; others struggled in a setting they viewed as distractive and isolated.