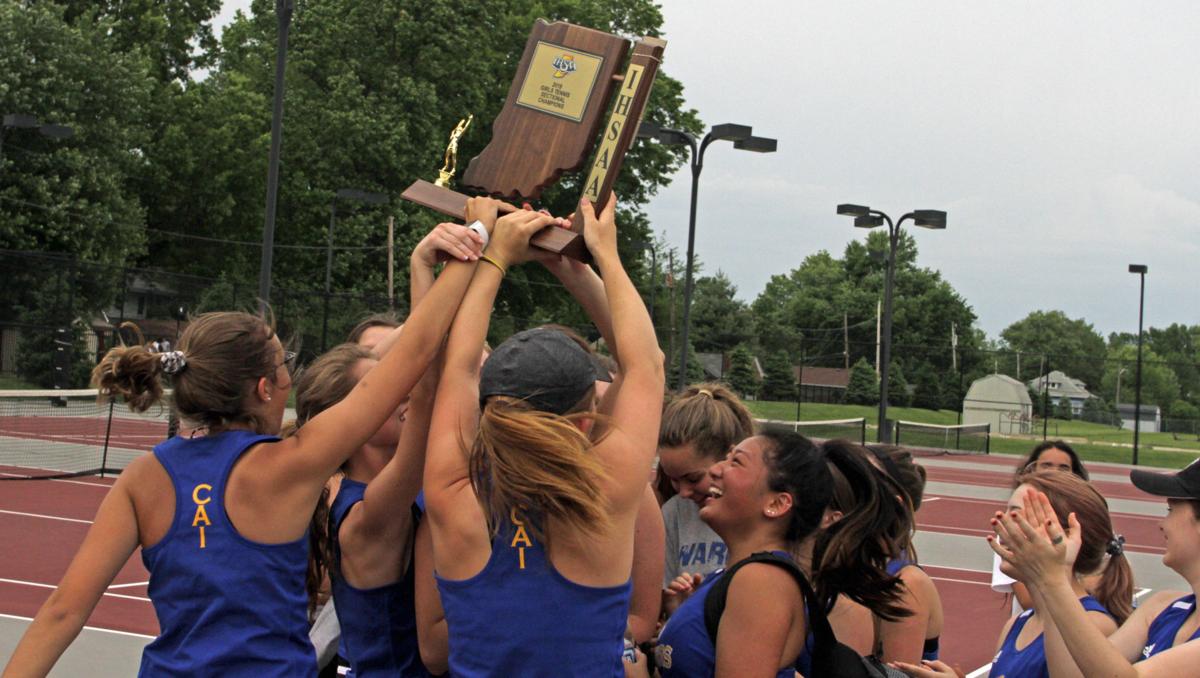 Members of the Christian Academy girls' tennis team hoist the sectional trophy skyward after the Warriors edged host New Albany 3-2 in the New Albany Sectional final Thursday afternoon. CAI advances to next week's Silver Creek Regional. The Warriors will face the winner of the Silver Creek Sectional in Tuesday's semifinals. 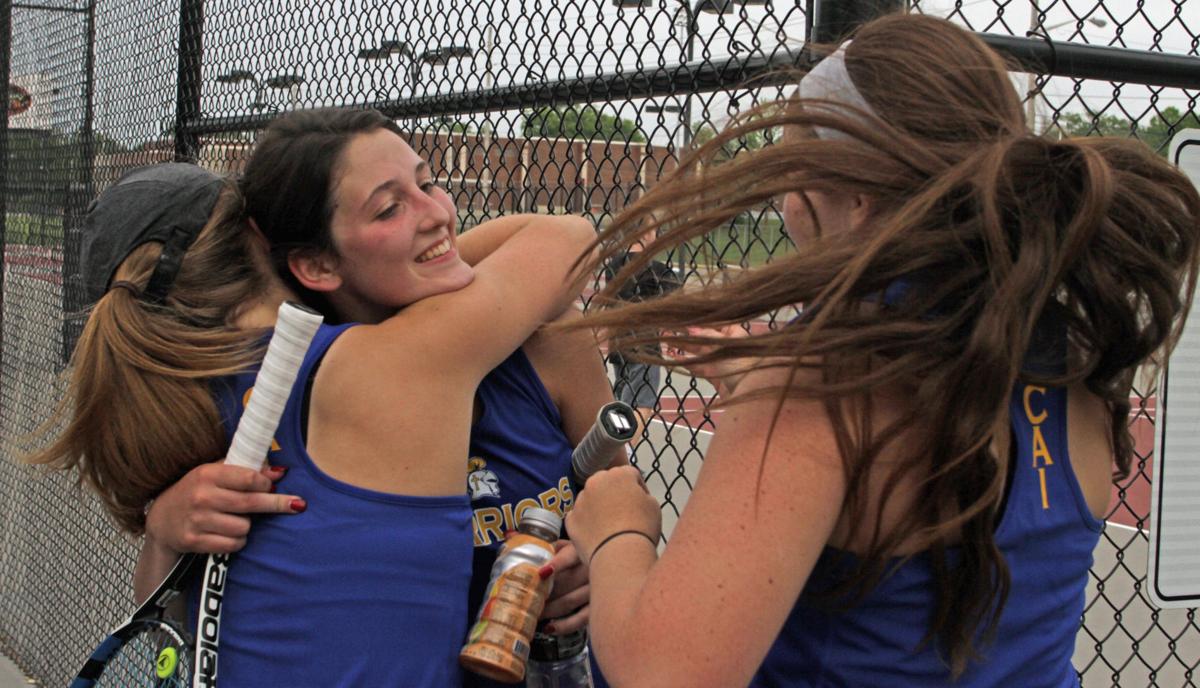 Christian Academy senior Julia Lostutter is congratulated by her teammates after her victory at No. 3 singles. Lostutter's triumph clinched the sectional title for the Warriors. 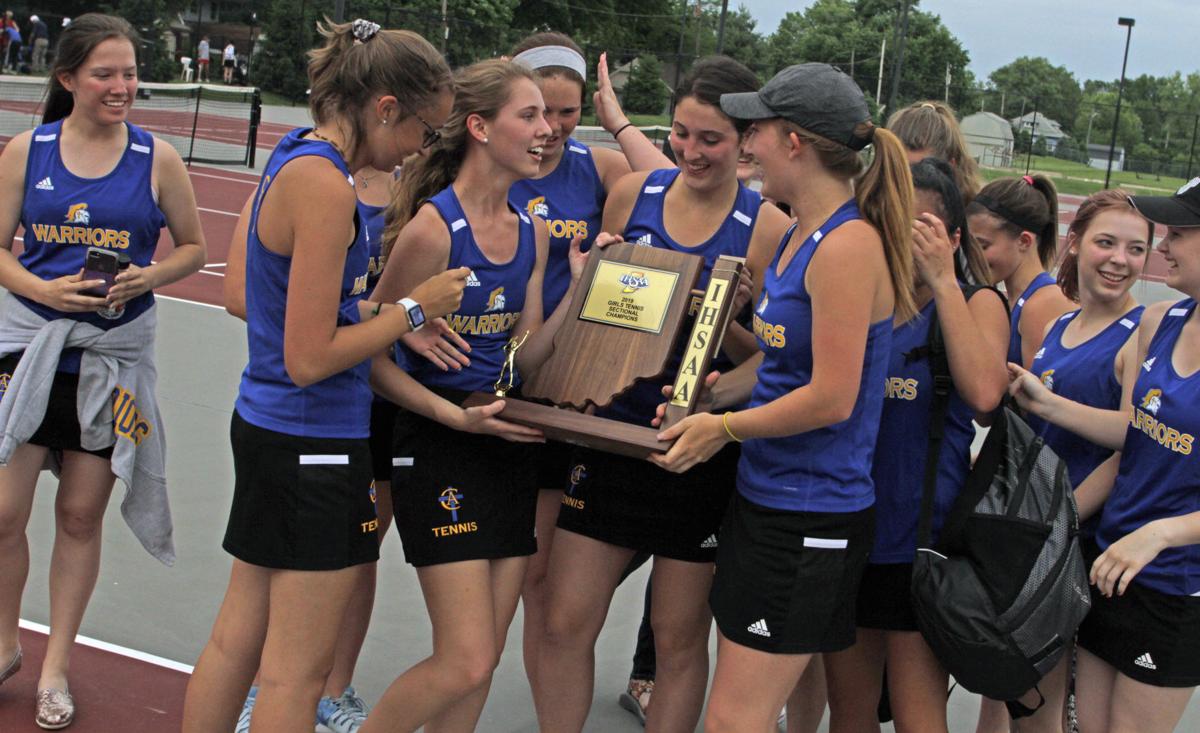 Members of the Christian Academy girls' tennis team hoist the sectional trophy skyward after the Warriors edged host New Albany 3-2 in the New Albany Sectional final Thursday afternoon. CAI advances to next week's Silver Creek Regional. The Warriors will face the winner of the Silver Creek Sectional in Tuesday's semifinals.

Christian Academy senior Julia Lostutter is congratulated by her teammates after her victory at No. 3 singles. Lostutter's triumph clinched the sectional title for the Warriors.

NEW ALBANY — Thursday was more than six years in the making for Christian Academy's five seniors.

Led by their senior quintet the Warriors won their first sectional title in four years, outlasting the host — and three-time defending champion — Bulldogs 3-2 in the New Albany Sectional final.

"My seniors, I've got five seniors, they've all played together since sixth grade. For them to be able to finally get a sectional title is just huge for them," CAI coach Steve Brown said. "I'm just really, really proud of them."

The Warriors swept all three singles matches — all of which were straight-set victories from seniors — en route to their first crown since 2015, when the Class of 2019 members — Meghan Hunt, Lindsey Bilkey, Julia Lostutter, Madelyn Brown and Ashley Moffett — were eighth-graders.

"Teams in the past have won, but we've never won when we've been on the team, it's definitely been a goal of ours," Bilkey said.

"It’s been really exciting to work up to this and we’re super-excited that we won in our senior year and we get to move on and play at regionals," Hunt added.

New Albany, which blanked Christian Academy 5-0 in last year's sectional final, evened it up a short time later after Adrienne Duke and Maddie Inlow defeated Moffett and McKenna Straw 6-0, 6-1 at No. 2 doubles.

"For me it really difficult mentally and physically," Bilkey said. "It was a long match, so I had to keep fighting. Even when I was up I had to keep my mental game on point, so that I didn’t get cocky and just tried to keep moving on and holding onto the strength that I had left."

CAI clinched the title when Lostutter finished off her 7-5, 6-1 win over Ruby Quinn at No. 3 singles.

"My match was really difficult, just with point confusion and keeping a positive mental attitude," said Lostutter, whose match featured a score discrepancy in the first set that forced the two to backtrack and replay several points. "It was all about just keeping my mental attitude up and [my teammates] did a great job helping me through the last set."

The loss ends the season for the Bulldogs (5-5), who will lose five of their top seven players, including Scott and both doubles teams, to graduation.

"We still had a successful season all-in-all, I'm happy with how we played," first-year New Albany coach Matt Briscoe said.

SELLERSBURG — Henryville and Charlestown will vie for the Silver Creek Sectional title today after both won by 3-2 scores in Thursday's semifinals.

The Hornets held off Southern Athletic Conference-rival Borden. For Henryville, Kelsey Stoughton won 6-2, 6-2 at No. 1 singles while Riley Dieterlen triumphed 6-0, 6-2 at No. 3. The Hornets' clinched the victory at No. 2 doubles, where Ally Gardner and Kaylee Hardesty outlasted Lilly Huerta and Maddie Martin 6-2, 4-6, 6-4.

The Pirates, meanwhile, swept the singles matches en route to their victory over South Central.

Today Henryville will try for its first-ever sectional title while Charlestown will aim for its third, to go along with the ones it won 1988 and '89.

FLOYDS KNOBS — The host Highlanders rolled into today's sectional final with a 4-1 win over Salem in the Floyd Central Sectional semifinals on Thursday afternoon.

Floyd will face Eastern, a 5-0 winner over Crawford County in Thursday's other semi, at 5 p.m. in an effort to capture its 19th consecutive sectional title.