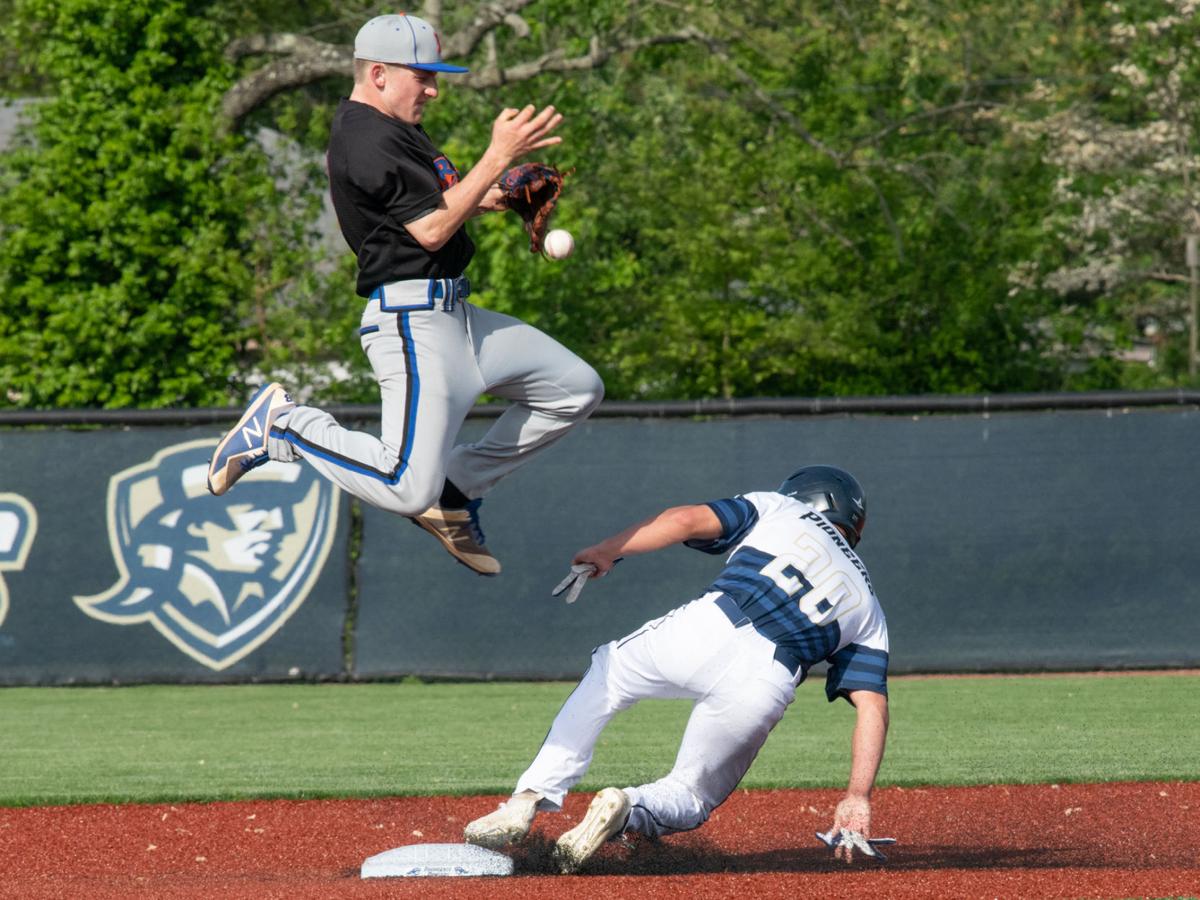 Silver Creek junior Dominic Decker, above in the air, was a key contributor as a freshman for the Dragons, who won sectional and regional titles. 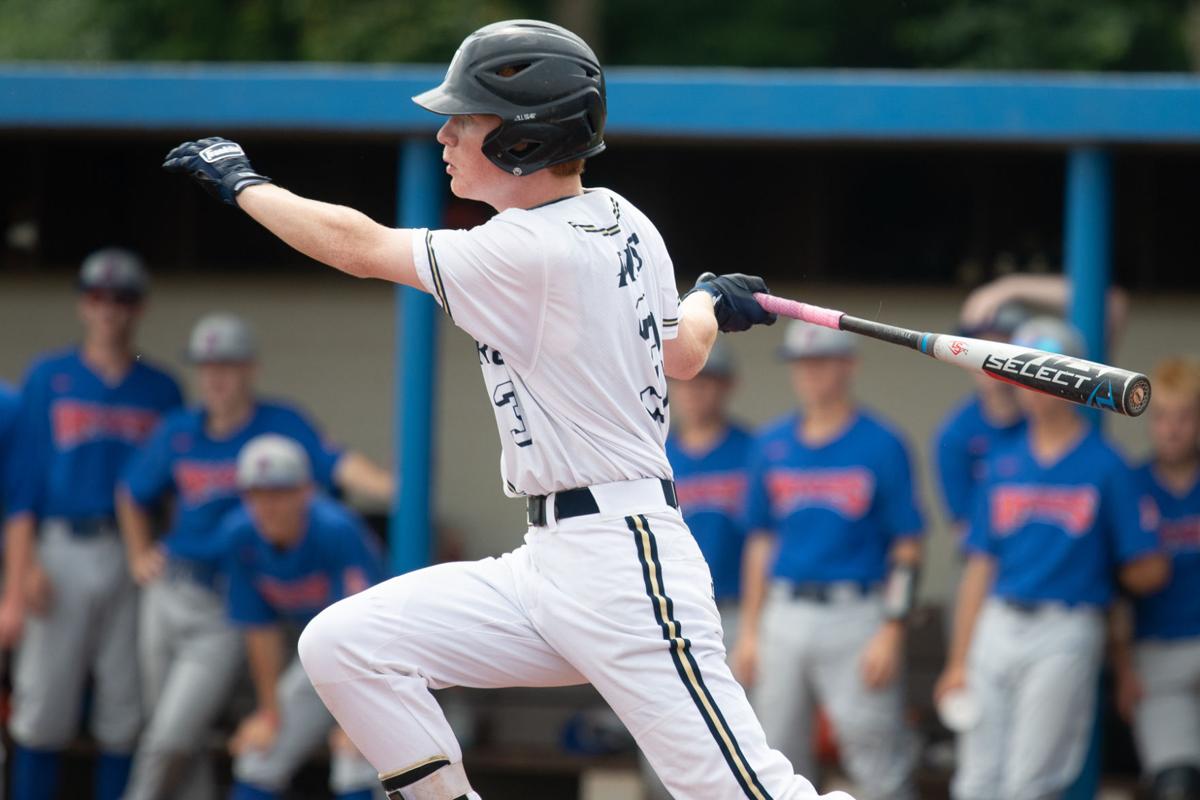 Providence’s Eli Watson takes a cut at the plate during the Pioneers’ 1-0 loss to Silver Creek in the Class 3A North Harrison Sectional final May 27, 2019. Watson, who has signed with Western Kentucky University, hit .397 and drove in a team-high 22 RBIs two years ago. 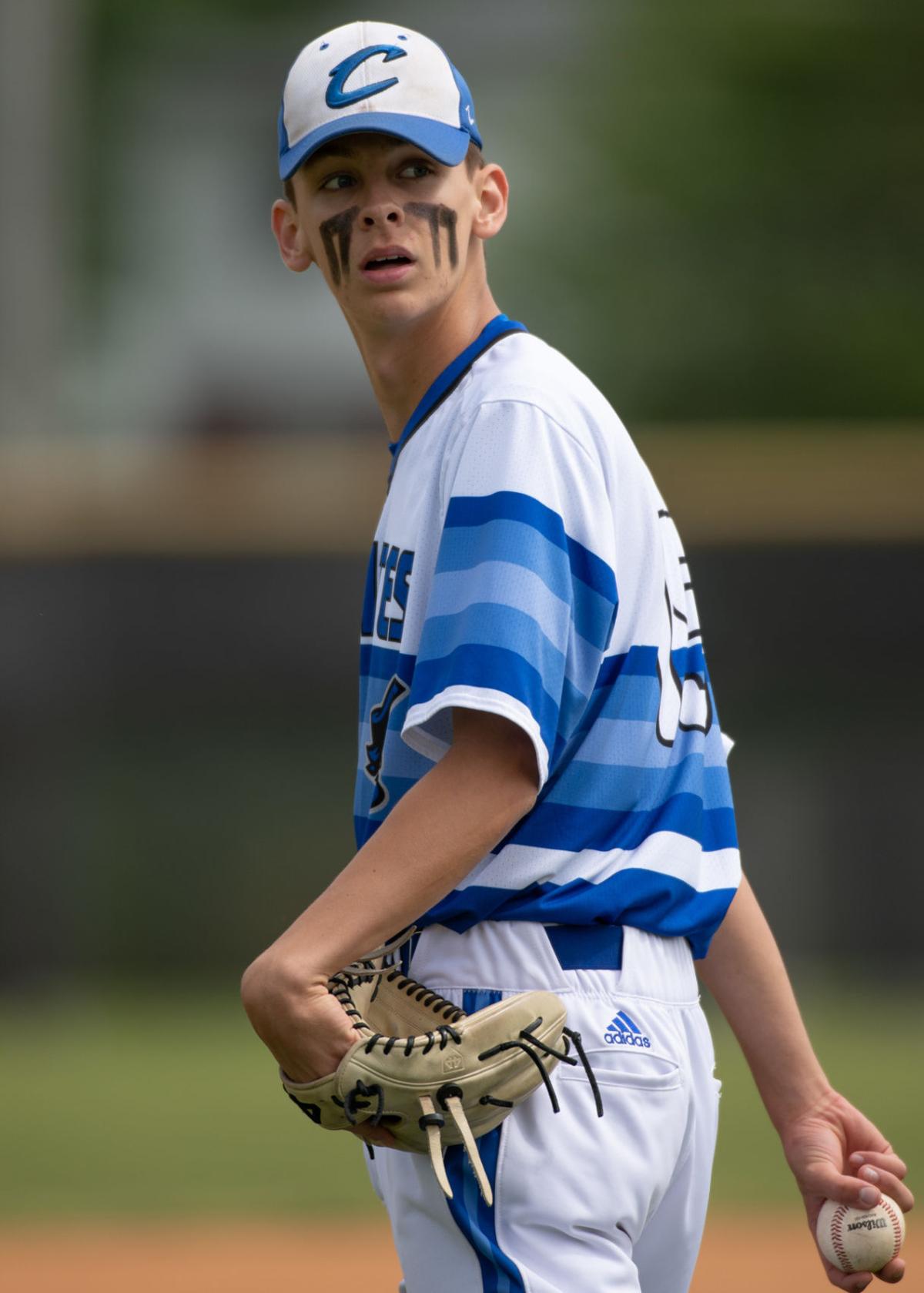 Charlestown pitcher Eric Wigginton looks to home plate during a game in 2019. The senior right-hander has signed with Spalding University. 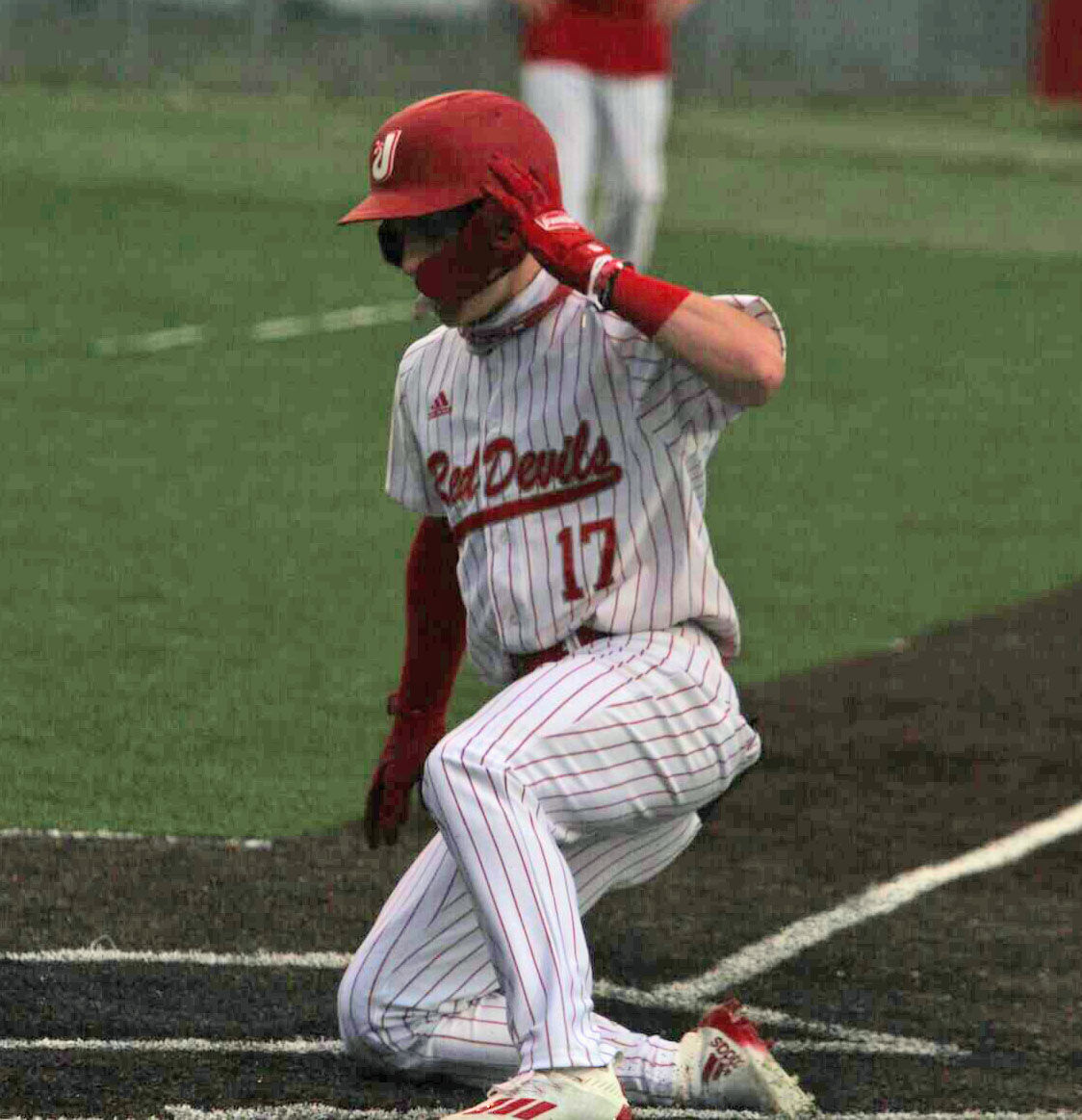 Jeffersonville sophomore Brett Denby is one of the top players in the state in the Class of 2023. He committed to the University of Georgia as a freshman. 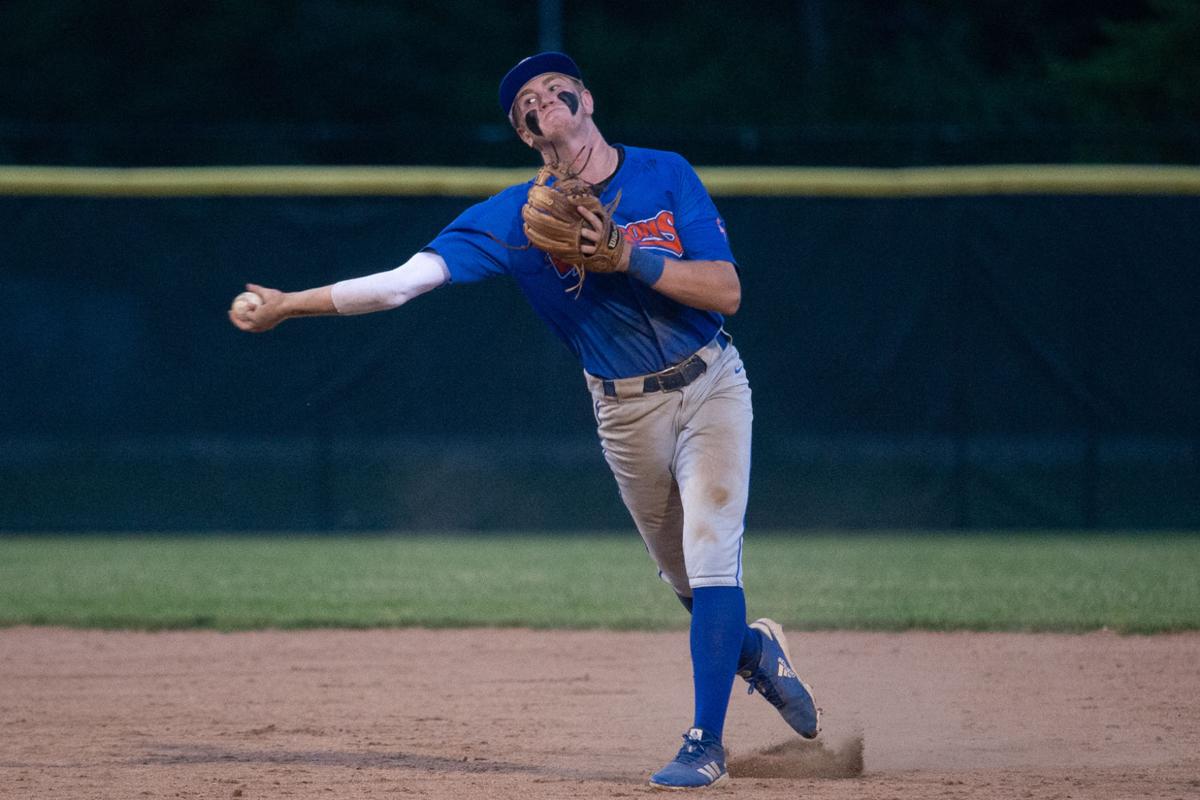 Silver Creek shortstop Holden Groher makes a play to first base during the Dragons' 5-3 victory over Vincennes Lincoln in the Class 3A Evansville Regional championship game at Braun Field on Saturday. 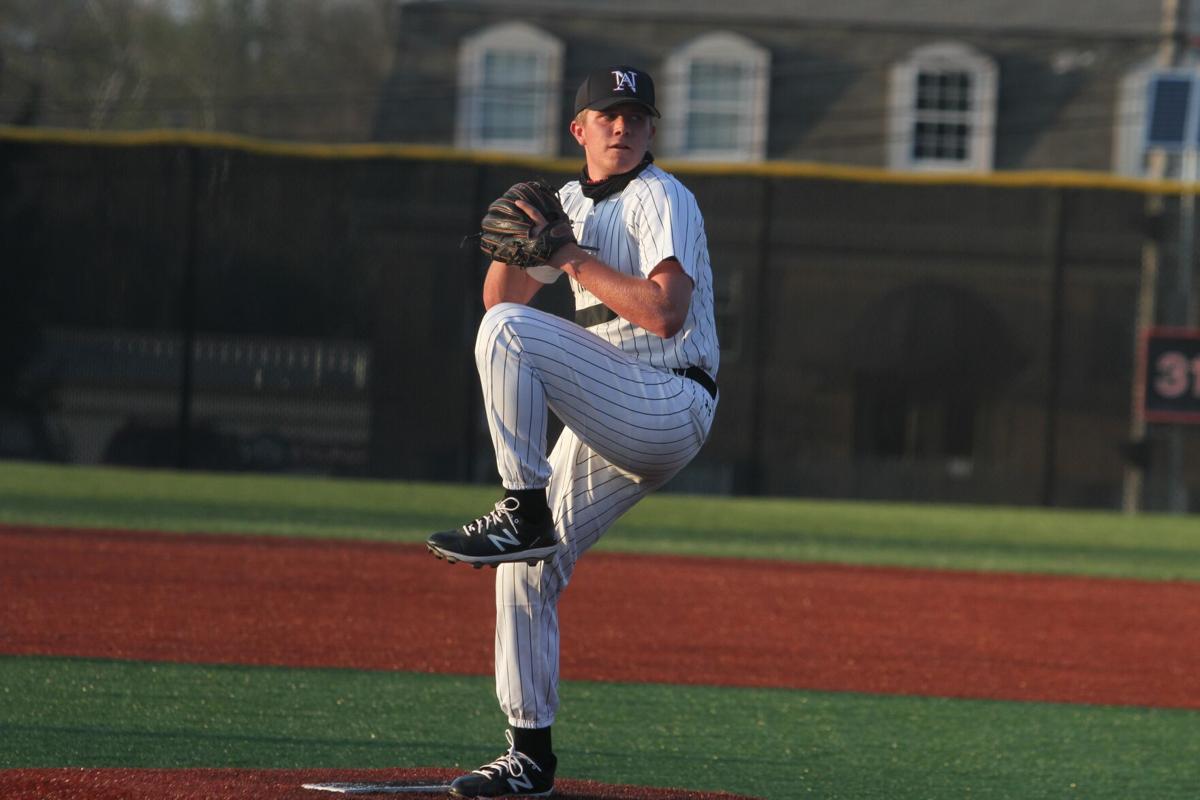 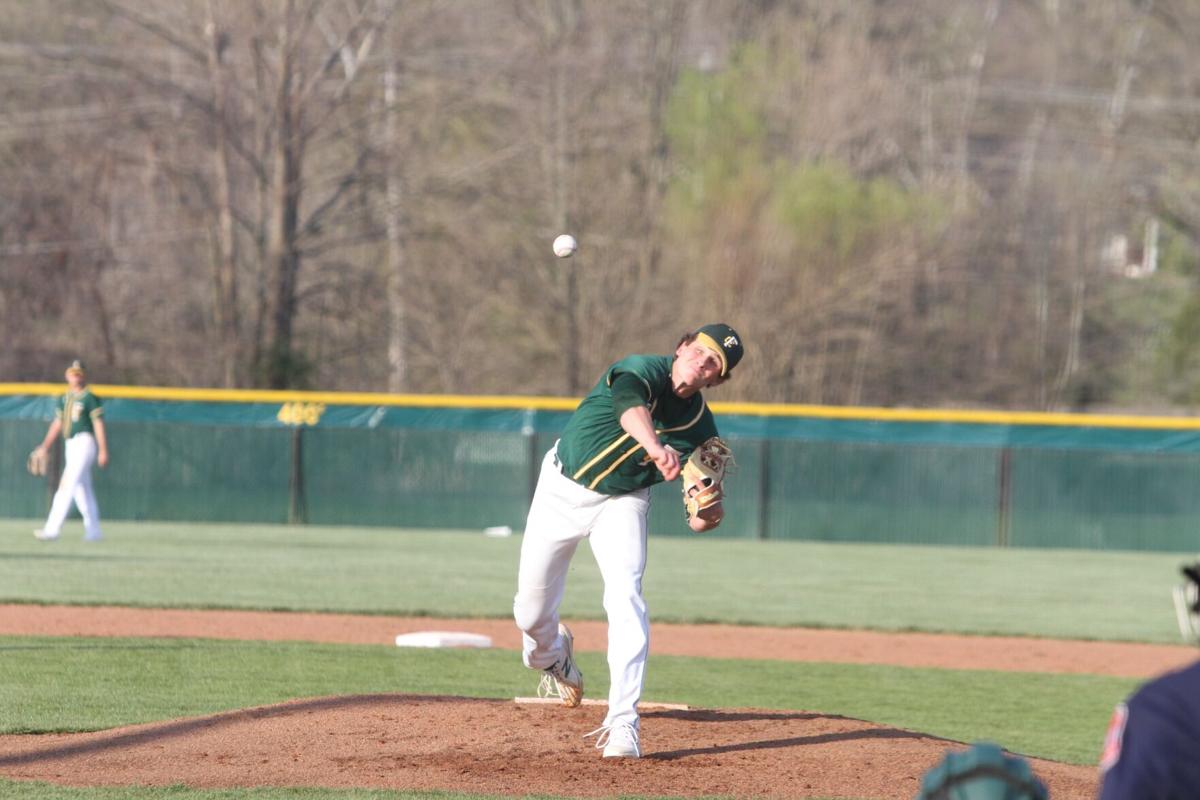 Baseball, like all the other IHSAA spring sports, is back!

Games began last week, but really get going this week.

With that in mind, let’s take a quick look at 12 area players to watch this season.

The junior pitcher/shortstop is one of the top players in the state in the Class of 2022.

Two years ago as a freshman the University of Louisville-commit hit .347 with three home runs and 20 RBIs at the plate. On the mound, the right-hander was 4-0 with 43 strikeouts over 26 2/3 innings.

The senior pitcher/catcher/infielder will help lead the Generals.

The junior shortstop had a fine freshman season for the Dragons, who won sectional and regional titles in 2019. He hit .382 with five doubles and two homers while driving in 18 and scoring a team-high-tying 37 runs. He also stole 15 bases in 16 attempts.

Denby, who committed to the University of Georgia last year, is one of the top sophomores in the state.

He’s a shortstop/right-handed pitcher for the Red Devils, who have won consecutive sectional titles.

The senior first baseman/designated hitter batted .444 with 24 RBIs as a sophomore in 2019.

The senior pitcher/outfielder had a solid sophomore season for the Braves in 2019, hitting .385 with four doubles and two triples while driving in 16 runs. He also scored 24 runs and went 7-for-7 in stolen bases.

The senior pitcher/infielder will try to help the Highlanders capture their first sectional title since 2015. He’s signed with Indiana University.

The senior pitcher/infielder has been a starter since his freshman year for the Dragons.

The junior pitcher/infielder is one of two Division I commits on the Red Devils’ roster. He pledged to Indiana State this past October.

The senior pitcher/infielder, a Bellarmine-signee, got his season off to a solid start Tuesday. The right-hander allowed one earned run on one hit while walking three and striking out six in six innings during the Highlanders’ 7-1 win over Jeffersonville.

The senior centerfielder/pitcher, and Western Kentucky-signee, has been a starter since his freshman year. In his first two years on the varsity, Watson hit .357 while driving in 42 runs and scoring 37 for the Pioneers, who went 49-9 in that span. As a sophomore, he hit .397 with a team-high 22 RBIs.

“I believe he’s one of the top hitters, not only in our area, but in the state,” Pioneers coach Scott Hutchins said. “He is our vocal and emotional leader, and he absolutely works his tail off every single day. He really deserves the success that has come his way over the last few years. We also expect him to help us quite a bit on the mound.”

The senior pitcher/third baseman/outfielder is one of the Pirates’ leaders. The Spalding-signee started the season strong, limiting Lanesville to one hit while recording double-digit strikeouts in four innings.

Now, let’s take a brief glance at each area team.

• LOWDOWN: The Braves return a handful of players from 2019’s sectional runner-up squad, plus have an influx of newcomers.

• STOTTS SAYS: “Like everyone else, we’ll be very green. The freshmen are freshmen and the sophomores are essentially in the same boat. Most of our arms are back this year, so that’s always a plus. We will be an athletic team that will hopefully play solid defensively and be aggressive on offense. We believe we will be competitive in our conference and will vie for a sectional title.”

• LOWDOWN: Hester, a long-time assistant under departed head coach Ricky Romans, has one of the more experienced squads around with 10 seniors on his roster. Wigginton has signed with Spalding University, and McCoy with Hanover.

• HESTER SAYS: ”I’m looking forward to the season. We have a lot of senior leaders that work hard and have great character, so it’s going to be a really fun year with these guys. Our strong suit is probably going to be our pitching.”

• LOWDOWN: The Generals return a few players from the team that lost to Lanesville in the sectional final two years ago.

• KNIGHT SAYS: “In my discussions with our team, I have told them that I believe we have a good opportunity to be competitive in the conference and in our sectional. I am not sure if this is the most-talented team I have had since I have been here, but I do see it as one of my deepest. There are several other players that I would feel comfortable inserting into our lineup without any drop-off. I think we also will have a very competitive JV team this year.”

• LOWDOWN: The Warriors will try to better their one-win season from 2019.

• MANIAS SAYS: ”I think we will be a team that improves the whole season. I am looking forward to our team growing.”

• LOWDOWN: The Highlanders have a solid group of returning players led by Goforth, who has signed with Indiana; Sorg, who has inked with Bellarmine and Polk, who will play football at Marian University. Floyd should have a shot at its first sectional title since 2015.

• LaDUKE SAYS: “We look to have a very competitive team this season with a very challenging schedule. Hopefully this will prepare us for the Hoosier Hills Conference tourney and the sectional later in the season.”

• OUTLOOK: The Hornets return only a handful of players from the team that lost to Clarksville in the sectional semis two years ago.

• SCHROEDER SAYS: “I really don’t know what to expect from our group. Of the 14 players on the roster, only five have significant varsity experience. We have some sophomores who show some promise, but they have not played a game of high school baseball. Essentially, they are freshmen since they missed out on last season. The goal for our team is to progress and get better each day. There is a great deal to learn for most of them so it is my job, and the job of my staff, to teach them. Fortunately, we have players with great attitudes and the desire to get better.”

• LOWDOWN: The Red Devils return only one starter (Stull) and one other significant contributor (Amick) from the team that won a second straight sectional title in 2019. Jeff does, however, have a lot of young talent in Denby (a Georgia commit) and McEwen (a Indiana State commit).

• ELLIS SAYS: ”We are inexperienced, but have the ability to be a good ball club. Our schedule is tough and we may take some lumps early but we expect to be ready and playing well come conference and sectional time.”

• LOWDOWN: The Bulldogs return a couple of key contributors — led by Elliott and Biven — from the team that lost to Jeff in the sectional semis two years ago.

• McINTYRE SAYS: “I honestly have no idea what to expect this season. I’m just glad we get to play again. Like most teams we have a lot of unknowns. Last year was difficult on everyone, so the chance to go out and compete again is exciting. We have some good arms at the top but a lot of our success will depend on how the other pitchers come along. We are a little more athletic overall than we have been in a few years. Baseball in this area is so good with so many good players. Every game is going to be competitive. There are going to be a lot of good games to get out and see this spring.”

• LOWDOWN: Giltner and Baker are the team captains and Thompson will be the team’s pitching ace.

• AARON SAYS: “I can’t wait to get the season started. I really think we are going to shock a lot of people this year. We have a well-balanced outfield, a pretty good infield and a solid pitching staff that throw strikes. I do believe we may struggle at the beginning of the season, because we are so young and some players are in positions they’ve never played before, but I do believe we could make a run for the sectional championship.”

• LOWDOWN: The Pioneers are back in 2A this season after a couple years in 3A due to the IHSAA’s “success factor.” Hutchins, a former long-time assistant, took over the program after Scott Hornung retired in 2019. {span}Outside of the above-mentioned seniors, however, they don’t have much varsity schedule.

• HUTCHINS SAYS:“We have a chance to be a really good team by the end of the season. Developing our pitching staff is a big priority for us. We are excited about our ability to hit and play defense. We have a lot of good arms, particularly young guys, but we are lacking experience. It is a really great group of hard-working kids. They all like each other and are really fun to be around.”

• 2019 RECORD: 23-10 (Won the Mid-Southern Conference, North Harrison Sectional and Evansville Bosse Regional before losing 2-1 to Edgewood in the Mooresville Semistate).

• LOWDOWN: The Dragons, who were ranked No. 5 in the 3A preseason poll, return only a couple of key contributors from the team that won sectional and regional titles two years ago.

• DECKER SAYS: “Everybody’s been off for two years, so it’s a slow process. Their baseball IQ isn’t very good right now because they just haven’t played, because I really don’t count travel-ball as ‘playing’ because they just go out and play, they don’t really learn to do things the right way. We’ve got a long way to go. It’s early, but I think we’ll be fine.”