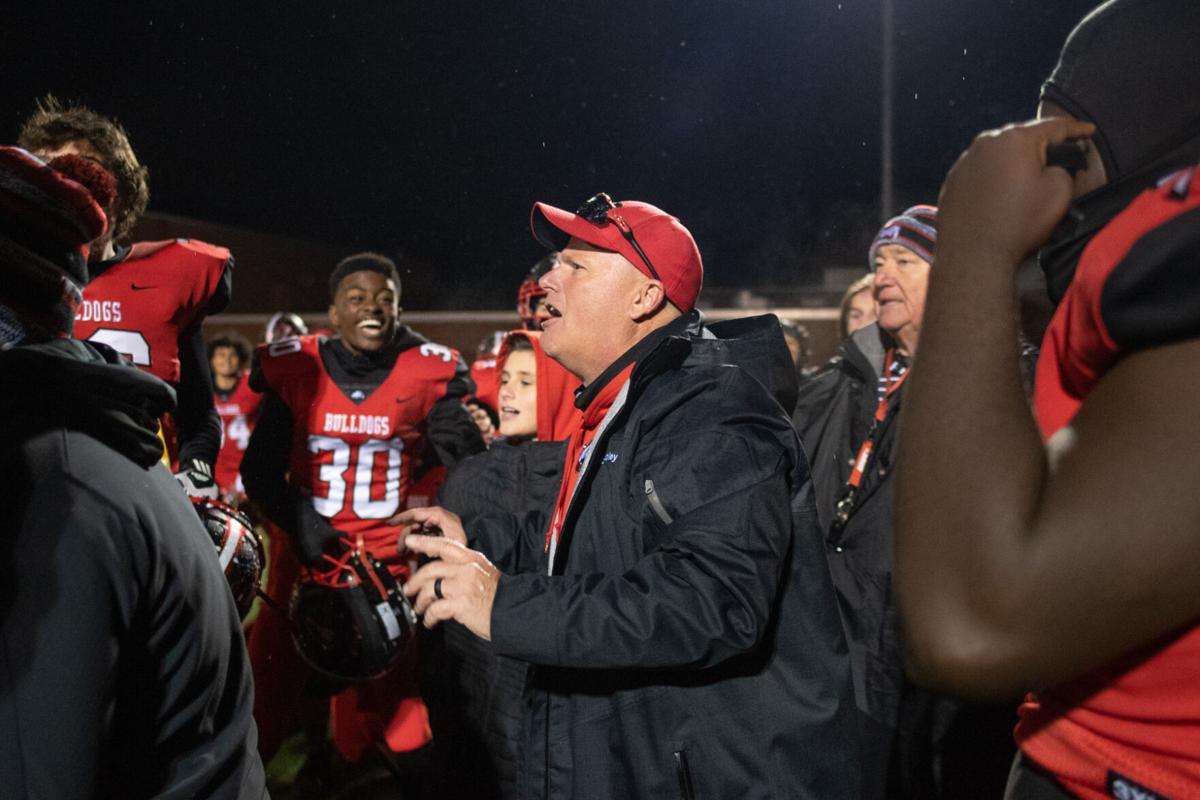 New Albany head coach Steve Cooley addresses his team after the Bulldogs’ 33-14 victory over Bloomington South in a Class 5A regional championship game at Buerk Field last Friday night. New Albany will face No. 1 Cathedral at 7:30 p.m. tonight at Arsenal Tech in Indianapolis with a spot in the state championship game going to the winner. 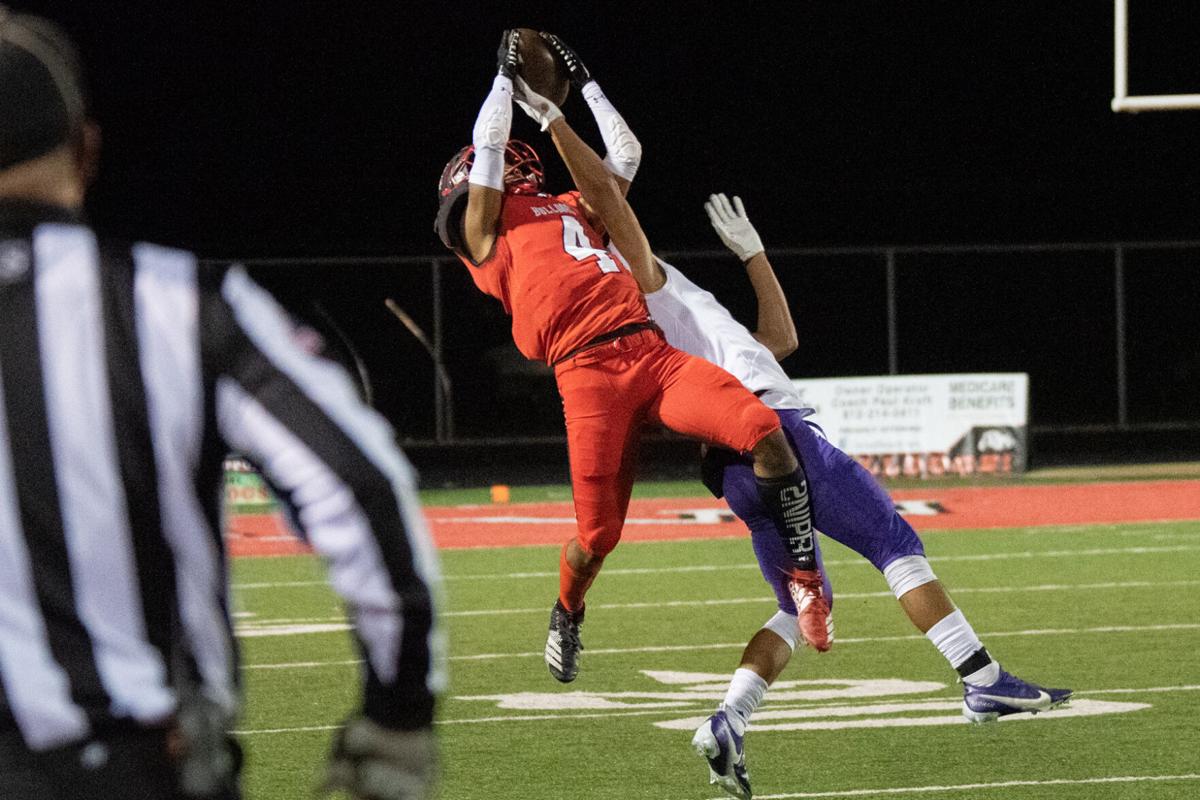 New Albany senior DeJon Winburn soars for a catch during the Bulldogs’ 33-14 victory over Bloomington South in a Class 5A regional championship game at Buerk Field last Friday night. 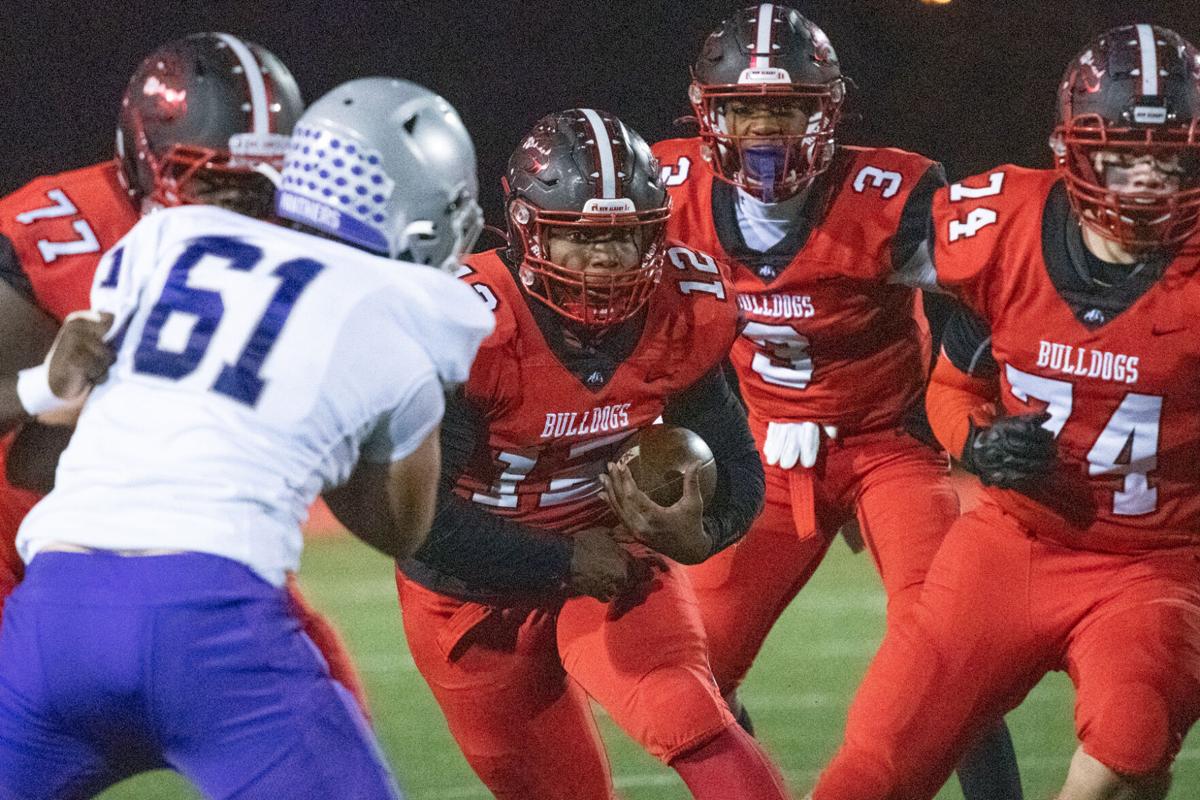 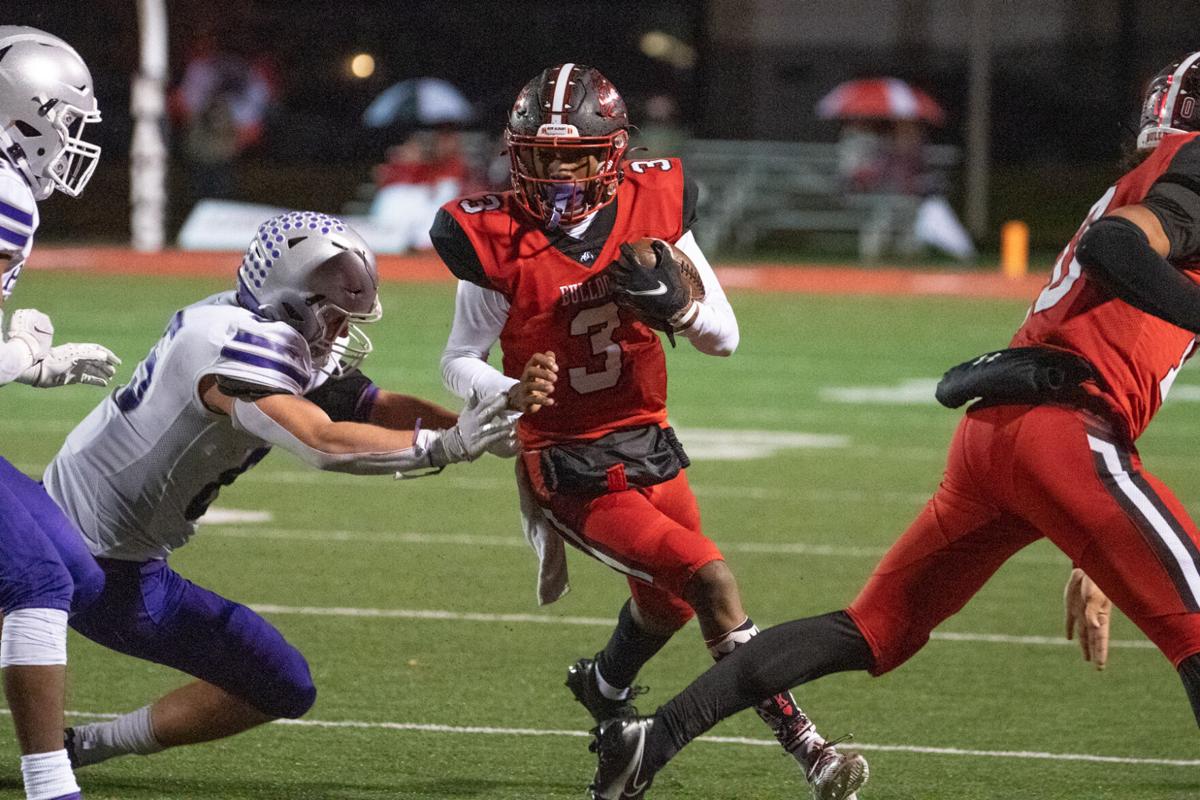 New Albany senior quarterback Derell Simmons looks for an opening during the Bulldogs’ 33-14 victory over Bloomington South in a Class 5A regional championship game at Buerk Field last Friday night.

NEW ALBANY — There’s no doubt that the New Albany Bulldogs will be the underdogs in tonight’s Class 5A south semistate game against Indianapolis Cathedral.

But that’s just fine with them.

“It’s good playing a team coming in as the underdog,” ‘Dogs senior quarterback Derell Simmons said. “Them overlooking us, all we’ve got to do is just come over there and smack’em in the mouth. We’ve got nothing to lose.

“We’ve made so much history already. It’s just a blessing playing here.”

Indeed tonight’s New Albany (9-3) at Cathedral (12-1) contest, which is slated to kickoff at 7:30 p.m. at Arsenal Tech’s Howard Longshore Stadium in Indianapolis has all the makings of a David vs. Goliath matchup.

The Bulldogs enter the game unranked while the Fighting Irish, the reigning state champs, come in as No. 1.

Oh by the way, the Fighting Irish have won 13 state titles while the Bulldogs have never even appeared in a championship game.

“It looks like we’re playing the Fighting Irish of Notre Dame, but you know what, we’re going to give everything we can,” New Albany coach Steve Cooley quipped earlier this week.

The winner of tonight’s clash will advance to the 5A state final, which is scheduled for 7 p.m. next Friday night at Lucas Oil Stadium.

Cathedral won its first state championship 53 years later in Class 3A. Since then the Fighting Irish have hoisted the trophy 12 more times, including six over the last 11 years. Cathedral outscored Zionsville 46-28 in last season’s 5A final.

The Fighting Irish return several key players from that team. Many of them have stepped into much larger roles this season.

Six-foot-1 sophomore quarterback Danny O’Neil, who has completed 195 of 316 passes (61.7 percent) for 27 touchdowns against only two interceptions so far this season, triggers the Fighting Irish’s offense. O’Neil recently took an unofficial visit to Purdue.

On the other side of the ball, the Bulldogs give up 29.3 points a game while Cathedral is allowing only eight, which ranks fourth in the state.

The Fighting Irish also have a very potent kicking game, led by senior Ben Gomez, who is 49 of 50 on point-after-touchdown kicks and is 15 for 22 on field-goal attempts.

“They do a lot of stuff on defense, with a lot of blitzes. We’ve got to handle their pressure early, try to get some first downs,” Cooley said.

Cathedral’s lone loss this season was a 21-6 setback to 6A No. 1 Center Grove, which is generally regarded as one of the top teams in the country.

So Cooley knows his team has a tall task in front of it. But he believes the Bulldogs are ready.

“The kids have had a great week of practice so far, we’re focused,” the New Albany coach said. “We’ve got a solid game plan, we’ve just got to execute. They’ve got really good players, we’ve got good players. You get this far everybody’s good right now.

“We can’t turn the ball over, we’ve got to get off to a good start and our defense has to play well. ... We’re just going to do what we do, and have fun doing it. We’ll come out and play as hard as we can.”

• LAST MEETING: Oct. 21, 1933 — Cathedral 21, New Albany 15: Frank Swindler returned a fourth-quarter interception 75 yards for a touchdown to give the Fighting Irish, who trailed 15-0 at halftime, a come-from-behind victory.

• UPON FURTHER REVIEW: New Albany is the fourth local school to win a regional title. Charlestown was the first (in Class 3A in 1989), followed by Providence (in 2A in '93) and Clarksville (in 2A in '97).