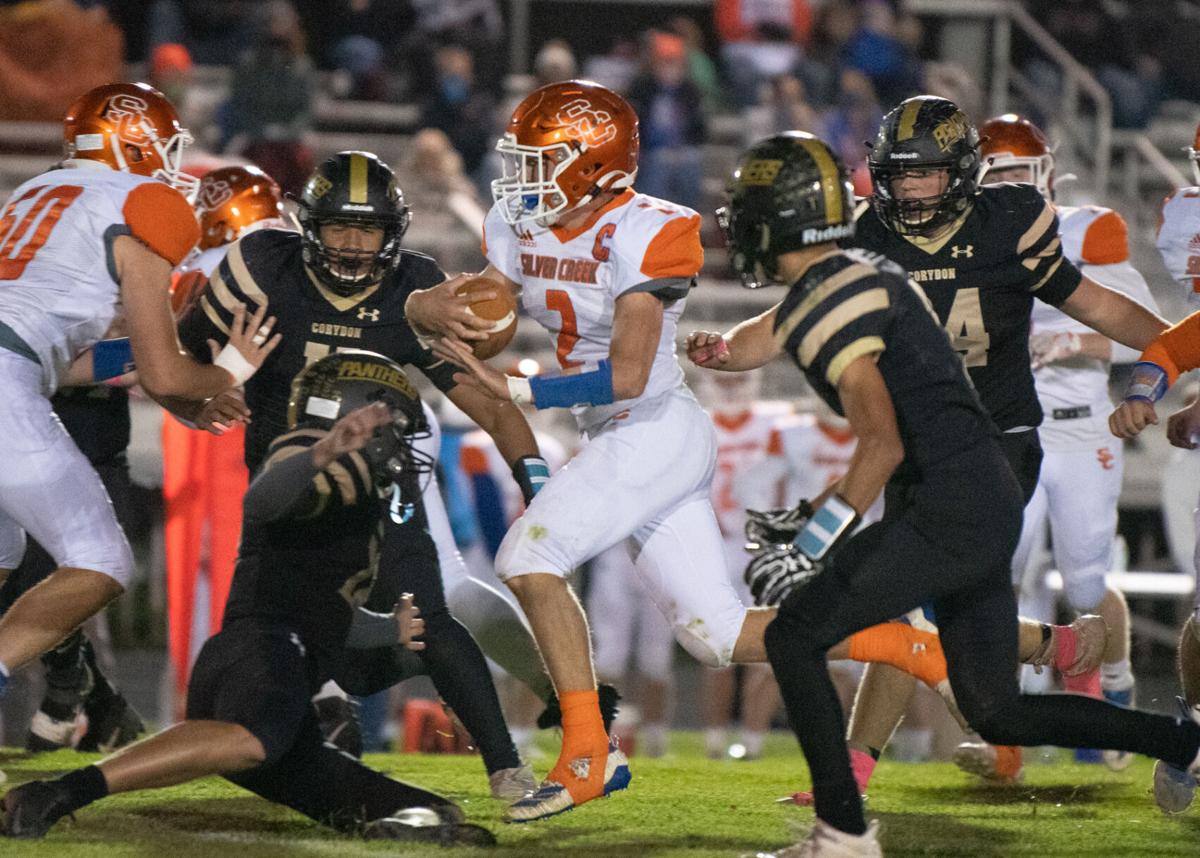 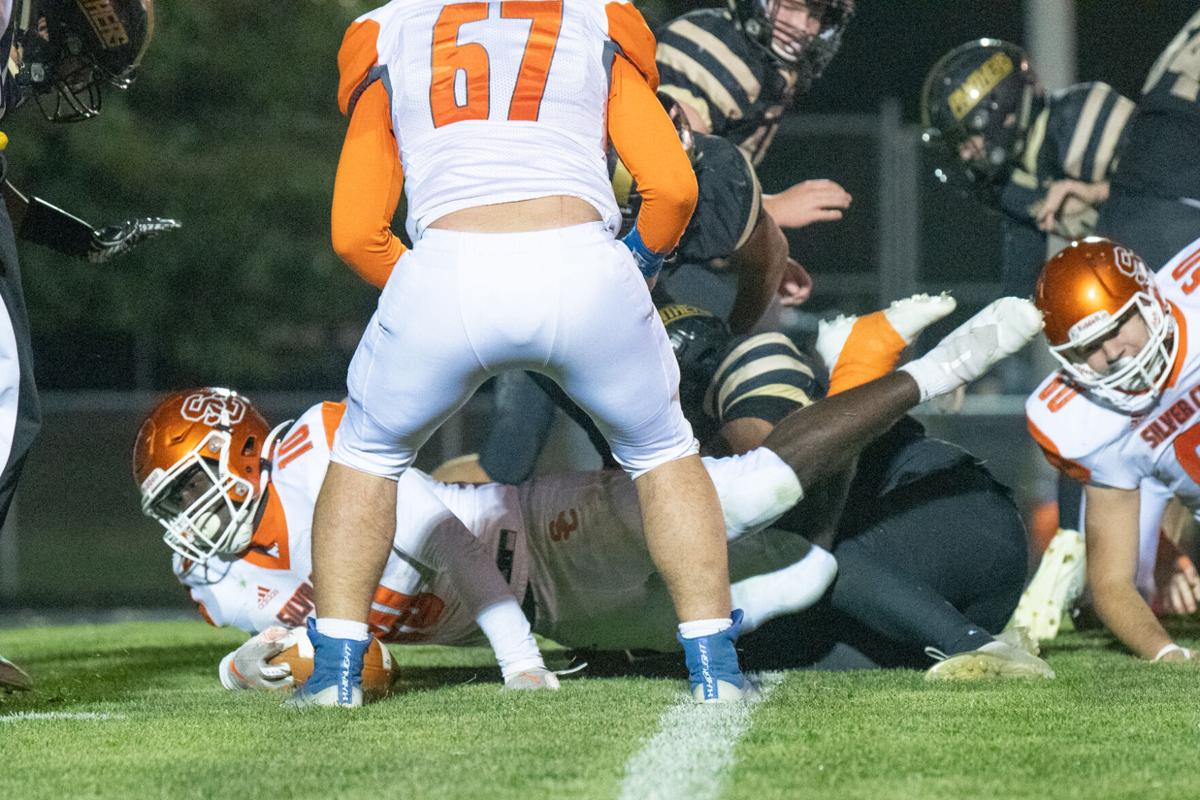 Silver Creek sophomore LaShaun Mays Jr. dives across the goal line during the Dragons’ 49-19 victory at Corydon Central on Friday. 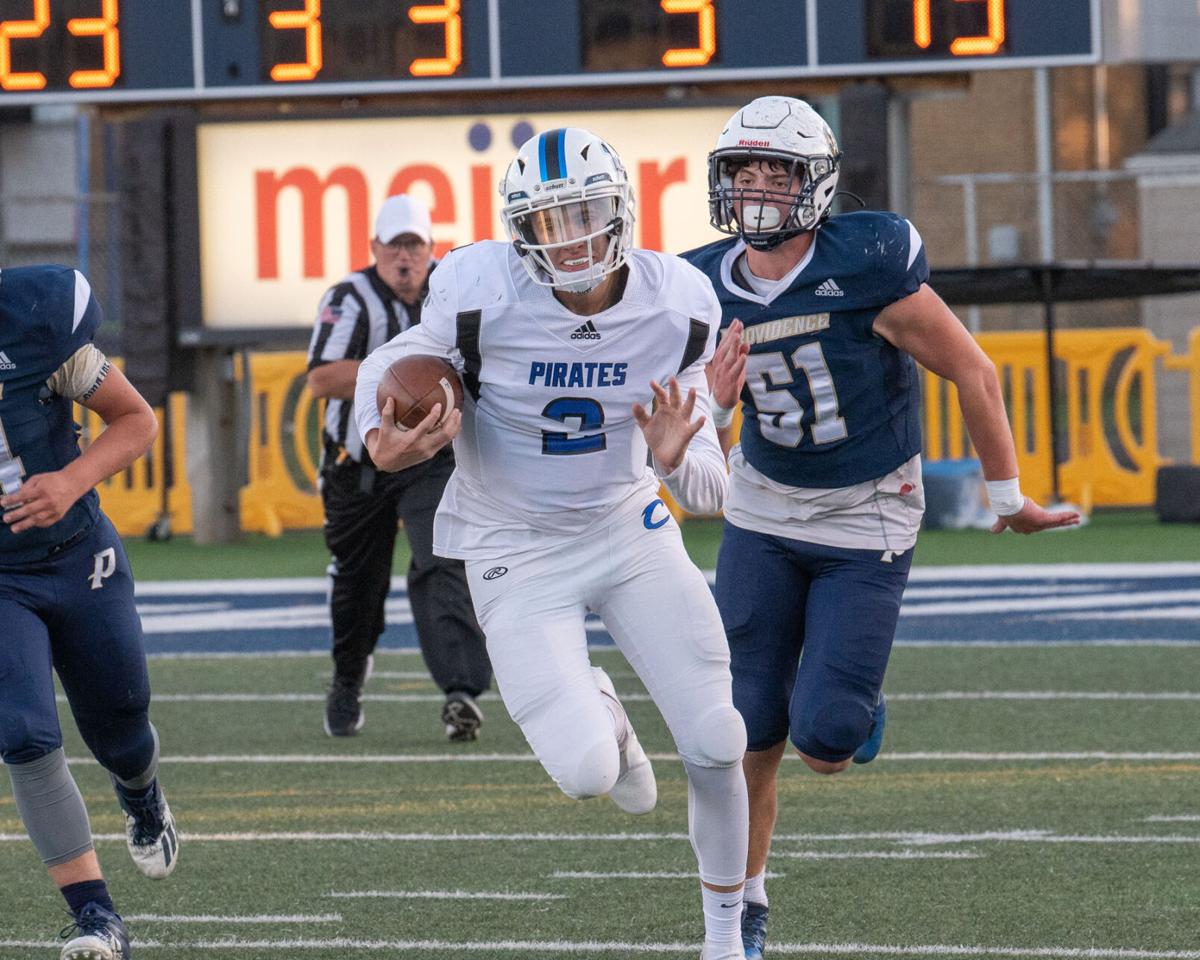 Silver Creek completed an unbeaten regular season with its 49-19 win at Corydon Central this past Friday night.

That got us thinking, where does Creek’s regular season rank among some of the area’s best of the last 20 years?

After looking at six of the top teams in Clark and Floyd counties over the last two decades we’ve come to the determination that, statistically speaking anyway, the Dragons have had the second-best run.

Here’s a quick look at those aforementioned six.

The Kevin Roth-coached Bulldogs went 8-1 in the regular season, scoring 340 points (37.8 per game) while allowing 184 (20.4). They suffered a 54-6 loss to Evansville Reitz in Week 2, but save a 15-14 squeaker over Jeffersonville, were relatively untouched the rest of the regular season. That team went on to win the sectional title, the program’s most recent one, before losing 42-18 to Center Grove in the regional.

Ron Weigleb’s final Highlander team went 8-1 in the regular season, tallying 323 points (35.9 ppg) while yielding 109 (12.1 ppg). Floyd lost 38-33 at Evansville Harrison in Week 2 before rolling to victories in the rest of the regular season. That team eventually fell, 31-21, to Vincennes Lincoln in the sectional final.

Brian Glesing’s Generals went 8-1 in the regular season, scoring 276 points (30.7 ppg) while giving up 147 (16.3 ppg). Their lone regular-season setback was a 23-16 loss at Perry Central in Week 5. In the postseason, that Clarksville team lost 31-30 in double-overtime at Brownstown Central in the sectional final.

The Steve Cooley-coached Red Devils went 7-2 in the regular season, compiling 347 points (38.6 ppg) while allowing 125 (13.9 ppg). They lost their season-opener, 38-12 at Evansville Reitz, then won six straight before falling 35-0 to Columbus East in the penultimate game of the regular season. Jeff went on to win the sectional (the program’s most recent one) before losing 42-6 to Columbus North in the regional.

This Hawkins-led squad posted some insane statistics that even this year’s Creek team couldn’t duplicate. The Pirates scored an astounding 527 points (58.6 ppg) while giving up 63 (7 ppg) in the regular season. They scored 41, or more, points in every regular-season game, including 53, or more, in six of those. That team won the program’s fourth sectional title before losing 57-49 to Gibson Southern in the regional.

Ben Landers (Silver Creek): The senior accounted for 252 yards of total offense and four touchdowns in the Dragons’ 49-19 win at Corydon Central on Friday night. Landers ran 22 times for 243 yards — 11 yards per carry — and three touchdowns while also hauling in a 9-yard touchdown pass.

Jaron Almeciga (Charlestown): The junior ran 16 times for 101 yards and a TD in the win over Eastern. He also kicked five PATs in the victory.

Eli Branham (Floyd Central): On offense, the sophomore wide receiver had four receptions for 83 yards and a touchdown in the Highlanders’ 49-7 victory over visiting Seymour. On defense, the defensive back tallied a team-high six tackles.

Hayden Combs (Charlestown): The 5-foot-9, 175-pound senior tight end/linebacker had two catches for 22 yards and two TDs in the Pirates’ win over the Musketeers. It was a special night for Combs, who usually only plays on special teams. “He’s a good kid who has worked hard and has a huge heart,” Charlestown coach Jason Hawkins said. “He is undersized for his positions, but if he was 6-2, 215, everybody in the state would know him.”

Jordan Ferguson (Jeffersonville): The senior running back ran 18 times for 190 yards, including an 81-yard touchdown run in the Red Devils’ come-from-behind 20-19 triumph at Bedford North Lawrence on Friday night.

Jeffersonville defense: The Red Devils shut out the Stars in the second half. Davarhy Julian’s 85-yard fumble return TD gave Jeff the lead and then Tyson Maddox recovered a fumble on BNL’s final drive.

Myles Johnson (New Albany): The junior ran for 208 on only 10 carries in the Bulldogs’ big 49-3 win at Jennings County last Friday night.

Deven Lukes (Charlestown): The junior had seven receptions for 126 yards and two TDs in the Pirates’ win over the Musketeers.

LaShun Mays Jr. (Silver Creek): The sophomore running back ran 14 times for 114 yards and two touchdowns in the Dragons’ big win at Corydon.

Tristan Polk (Floyd Central): The senior quarterback completed 8 of 11 passes for 218 yards and three touchdowns in the Highlanders’ big win against Seymour.

Kyondre Winford (New Albany): The junior ran four times for 160 yards — 40 per carry! — in the Bulldogs’ victory over the Panthers.

Wenkers Wright (Floyd Central): The senior running back had 214 yards of total offense and four TDs in Floyd’s big victory against the Owls. He ran 12 times for 201 yards — an average of 16.8 yards per carry — and three touchdowns while also hauling in a 13-yard TD pass.

Paoli (6-3) at Clarksville (3-6), 7 p.m.: The Generals try to end their five-game losing streak when they host the Rams, who have won four in a row, in a first-round Sectional 39 matchup.

Rock Creek (0-6) at North Central (1-6), 7 p.m.: The Lions look for their first win of the season — as well as their first-ever postseason win — when they visit the Thunderbirds, who are coming off their first victory, a 22-8 triumph over Eastern Greene, in a Class A Sectional 48 first-round matchup.

Providence (3-5) at Union County (3-5), 7 p.m.: The Pioneers, who won three of their final five regular-season games, look to take that momentum on the road when they visit the Patriots, who have lost four in a row, in a first-round Class 2A Sectional 39 matchup.

East Central (7-2) at Silver Creek (9-0), 7:30 p.m.: The Dragons will look to avenge their season-ending losses in two of the last three years when they host the Trojans in a 4A Sectional 23 first-round game.

Greensburg (5-4) at Charlestown (3-6), 7:30 p.m: The Pirates look to carry over the momentum from their big win over Eastern when they host the other Pirates in a 3A Sectional 31 first-round game.