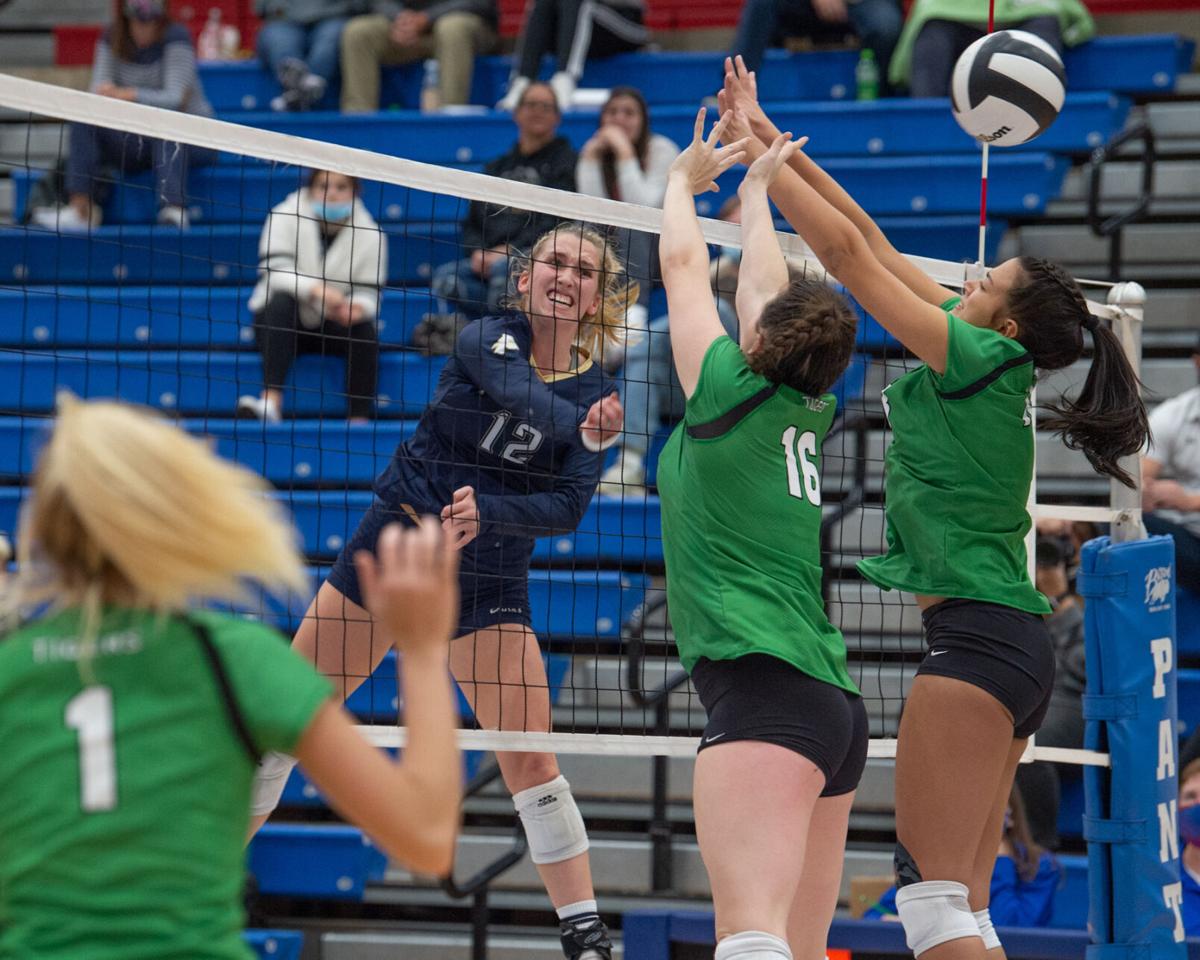 Providence senior Ali Hornung fires a spike past the Yorktown frontline during the Pioneers’ season-ending 3-2 loss to Yorktown in the Class 4A semistate match at Jennings County at Oct. 31. Wednesday, Hornung found out she was a first-team All-American and also signed her National Letter of Intent with Purdue. 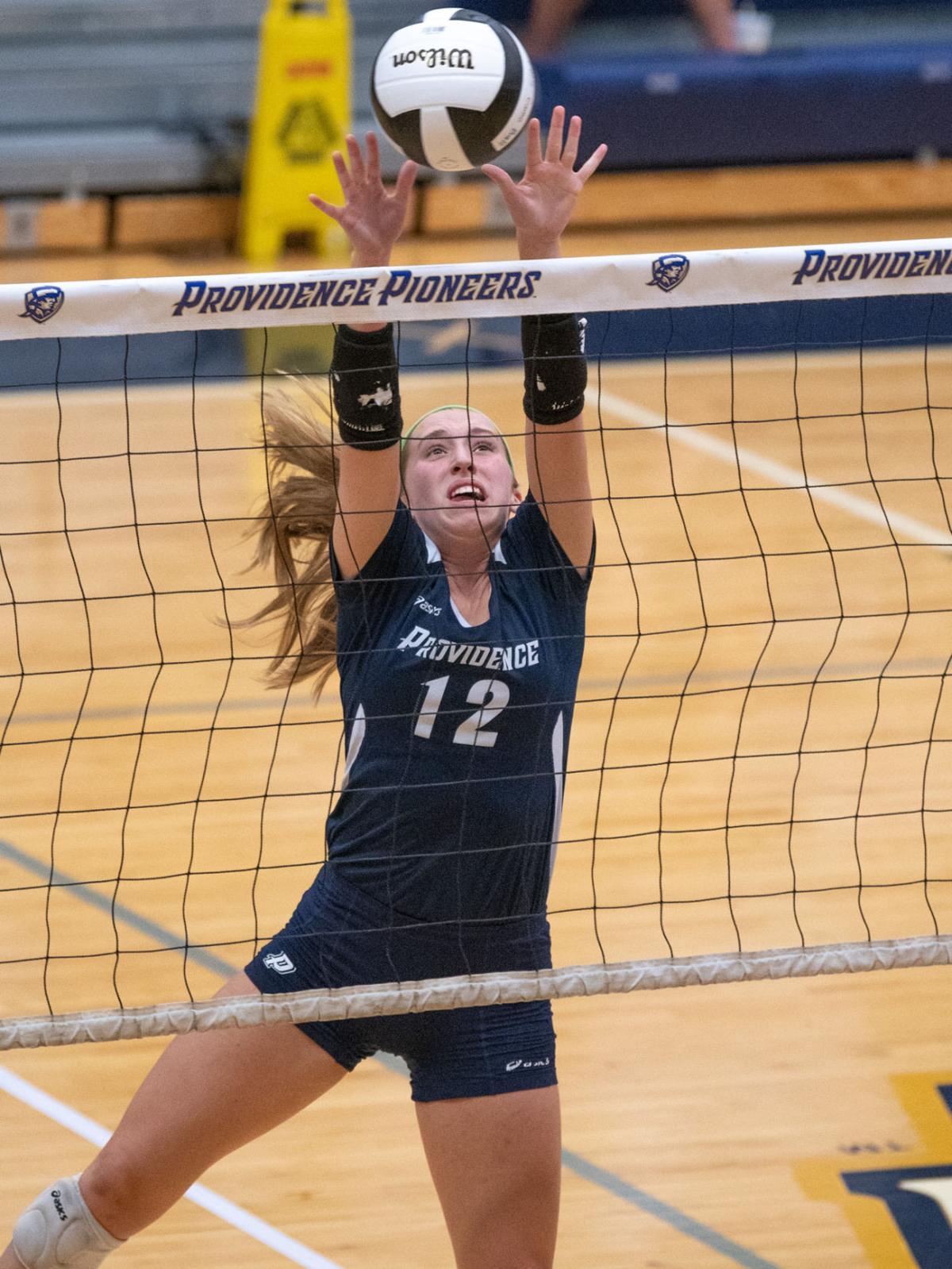 Providence’s Ali Hornung attempts to block a spike during the Pioneers’ win over Franklin in the Early Bird Tournament at the Larkin Center in September of 2018.

Providence senior Ali Hornung fires a spike past the Yorktown frontline during the Pioneers’ season-ending 3-2 loss to Yorktown in the Class 4A semistate match at Jennings County at Oct. 31. Wednesday, Hornung found out she was a first-team All-American and also signed her National Letter of Intent with Purdue.

Providence’s Ali Hornung attempts to block a spike during the Pioneers’ win over Franklin in the Early Bird Tournament at the Larkin Center in September of 2018.

Wednesday was quite the day for Ali Hornung.

The same day that the Providence senior standout found out she was named to the Under Armour All-American first team, she signed her National Letter of Intent to attend Purdue University.

“It was a good day,” Hornung said Wednesday night after a celebratory dinner.

Hornung is the first Pioneer to achieve All-American status since her older sister, Marissa, earned that distinction in 2017, when Ali was a freshman.

“I’m super grateful for it,” the younger Hornung said. “When Marissa got it her senior year, it was a goal of mine ever since then. ... I’m so grateful for it, so humbled by it and I’m just so excited.”

She also ranked second in total blocks (45) and block assists (37), third in assists (53) and fourth in service aces (28) for the Pioneers, who went 23-7 and lost 3-2 to eventual Class 4A state champion Yorktown in the south semistate.

“Ali is as skilled of a recruit as Purdue has seen in a long time,” Purdue coach Dave Shondell said after receiving Hornung’s NLI. “A multi-dimensional star in club and high school, the explosive six-rotation player will become a valuable weapon for the Boilermakers. Most-likely to focus on serving, passing and defense, Ali is more than capable of slugging it out along the net as well. Ali plays years above her current age.”

Normally, Hornung would participate in an all-star match with the other All-American players, but that won’t be possible this year due to COVID-19.

“I think they’re still going to do something to recognize everybody that made the team,” she said.

“Ali has been a force in the Providence program for the last four years, she started every match of her entire career. When you watch her play the reason that everybody in the country — from Stanford to Texas to Florida — wanted her to come in and be a libero for them is because she can do it all. And she keeps getting better,” Shondell said. “Ali is one of those players that if you designed an ideal teammate, she would be the description of what you would come up with. She’s a wonderful person. She competes. She encourages people all the time. She’s a great student. Just a fantastic individual. When she steps on the floor (though) it’s like she puts that Superman cape on and she just changes some of her dynamics on who she is.

“When you play all six rotations sometimes people think your ball-control skills get left behind, but that’s a fallacy, that’s not true. She understands the game better because she’s played all six rotations. She knows what the hitter’s thinking. She knows what the blockers are doing, so when she gets back behind them in a defensive position she’s going to understand. She’s covered about half the court for (Providence) from a passing standpoint for the past four years, she’s covered almost half the court. So she knows she’s got to cover a lot of ground and she also understands what it’s going to take to be successful at this level because she has a sister who’s gone through the same procedure that she’s going to go through here starting in June.”